Is the world coming around to an 'India model' of handling COVID-19?

Various countries have handled the outbreak of coronavirus in their own different ways. Each country's journey has been marked by delay in several decisions, be it delays in imposing travel bans, initiating screening measures or in delaying the eventual lockdown. A combination of these mistakes has resulted in the ensuing struggle that most countries have faced, as they have struggled to contain the outbreak from growing exponentially.

In contrast, the Indian response to the COVID-19 pandemic has been very proactive. Its decisions were early, initially met with scepticism from critics within India and outside. These decisions now stand vindicated, as several countries have ended up taking pretty much the same decisions that India took very early on in its efforts to flatten the curve.

Recently, a chart was put out by the website Our World in Data, which essentially plotted Government Response Stringency Indices for various countries. The Index essentially is a sum of seven response indicators which including school closures, workplace closures and travel bans among others and subsequently rescaled to a value from 0 to 100 (100 = strictest response).

This chart has been prepared by Our World in Data and the SDG-Tracker, which are collaborative efforts between researchers at the University of Oxford, who are the scientific editors of the website content.

The charts drawn up clearly demonstrated the seriousness, scale and swiftness of the Indian response, as government stringency swiftly escalated within a short span of time, as the reader sees India coming out on the top compared to every other country. 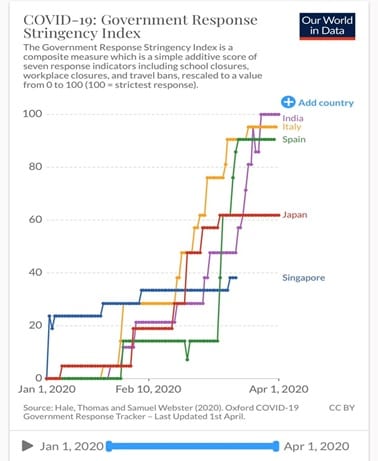 The fact that India's actions were stringent and early is a direct result of Prime Minister Narendra Modi's risk-taking ability, taking many decisions knowing that they come with the potential of significant political blowback.

It is not that this COVID-19 challenge has been surmounted; we still have a long way to go. But looking at how many other countries are now doing what we started out with, it does look like India is on the right track.

India starts with screening, stays ahead of the curve

Some of the decisions by India were taken well ahead of global standards, even as the World Health Organisation (WHO) itself gave very conservative estimates of the situation. Just note the following chronology related to screening.

Soon, the government took the harsh decision to scrap visas gradually. Criticised at first, the step was later seen as vital, as the realisation of countless lives being saved turned up. Seeing the situation in China, all e-visa facilities for Chinese nationals were suspended on 3 February, when India had not even seen 10 cases.

By 11 March, all existing visas, except diplomatic, official, UN/international organisations, employment and project visas, were suspended till 15 April.

On 22 March, India went into a self-imposed curfew — a "Janta Curfew" — when the nation had only seen 390 cases. The Janta Curfew gave the government and the people time to step into an actual lockdown. Within two days, the leadership displayed more of its ability to stay ahead of the curve, when on 24 March, at just 562 cases, it announced a complete lockdown. At the time, many people were calling India's actions unnecessary, and criticised the stringency of the lockdown.

In retrospect, the Modi government has been proven right, as many countries seen as seemingly managing the COVID-19 pandemic better like Singapore and Japan also announced lockdowns of their own to flatten the curve and curb the spread of COVID-19. Many other countries like Mauritius, South Africa and Fiji among others, especially in the developing world also took a leaf from India's book and announced their own lockdowns soon enough.

Further, one of the points of concern had been the economic damage that the poor would suffer. However, the government immediately announced relief packages for the poor and farmers. The RBI pitched in with measures that benefit industry, business and middle class.

So, it turned out to be a good combination of hard decisions and softening the blow of a lockdown. India has been ahead of the curve in dealing with a pandemic of this scale, and each passing day is showing just how invaluable decisive leadership has been in facing an invisible but deadly enemy like COVID-19.