Skipper Suryakumar Yadav blazed his way to an unbeaten 94 as Mumbai defeated Karnataka by seven wickets in a Group 'B' Super League match of the Syed Mushtaq Ali Trophy in Surat on Monday to end the rival's winning spree.

Surat: Skipper Suryakumar Yadav blazed his way to an unbeaten 94 as Mumbai defeated Karnataka by seven wickets in a Group 'B' Super League match of the Syed Mushtaq Ali Trophy in Surat on Monday to end the rival's winning spree.

Mumbai were chasing a stiff 172-run target and Surya, who has been in great form, single-handedly guided the domestic giants to victory with an over to spare. 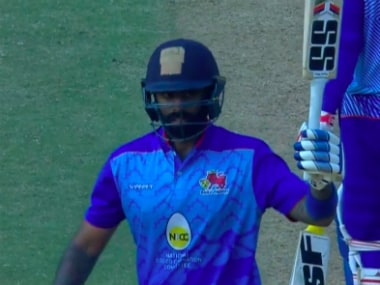 Suryakumar Yadav raises his bat after completing his fifty. Screengrab from BCCI.TV

The aggressive right-hander steadied the ship by stitching together a 46-run stand with Shreyas Iyer (14) for the third wicket.

However, Karnataka pegged Mumbai back by removing Iyer in the 11th over.

After Iyer departed, it was 'Surya show' at the CB Patel Ground as he toyed with the Karnataka bowlers, who wilted under his blistering attack.

He hammered 11 fours and hoisted four towering sixes to stamp his class. His 53-ball 94 would have surely impressed the national selectors.

The Mumbai captain then strung together a match-winning unbeaten 84-run stand for the fourth wicket with Shivam Dube (22 not out off 18 balls), who played the perfect second fiddle.

'Surya 2.0' was on display as he had all shots in the book and smashed the ball around to guide his side home. This was perhaps one of the finest knocks in the national T20 championship.

A strokeful 57 off 34 balls by opener Devdutt Padikkal, who struck four fours and as many sixes, along with a rearguard 71 off just 47 balls by Rohan helped Karnataka post a decent score on the board.

Kadam was also all guns blazing as he hit seven fours and three sixes before falling to a catch by Shaw off Shardul Thakur.

This was Karnataka's first defeat in the Super League stage, and Mumbai's win has opened up things in the group.

Later, Surya, who is eyeing a national berth, said he was doing what was in his hands.

In the second game, Haryana thrashed Baroda by six wickets and rode on fifties by Chaitanya Bishnoi (56) and Shivam Chauhan (50 not out) as they overhauled 139-run target with 15 balls to spare.

Put into bat, barring veteran Yusuf Pathan (45 not out), no other Baroda batsman showed spine as Haryana restricted them to sub-par 138/5.

In another game, Tamil Nadu beat Punjab by four wickets with spinners M Sai Kishore (3-10) and M Siddharth (3 -9) spinning their web around the opposition batsmen.

Punjab crawled to a below-par 94/8, courtesy Mayank Markande's unbeaten 33, but Tamil Nadu manage to chase the target despite losing six wickets in the process.

Meanwhile, in the final game of the day, Rajasthan beat Maharashtra by six wickets as they chased the 100-run target in 16.2 overs. Mahipal Lomror top scored with an unbeaten 35.

Asked to bat, Maharashtra crawled to 99/9 as spinner Rahul Chahar spun his web around the opposition batsmen. Kedar Jadhav, who has been named in the ODI squad against West Indies, however failed to make a mark after being dismissed for 10.