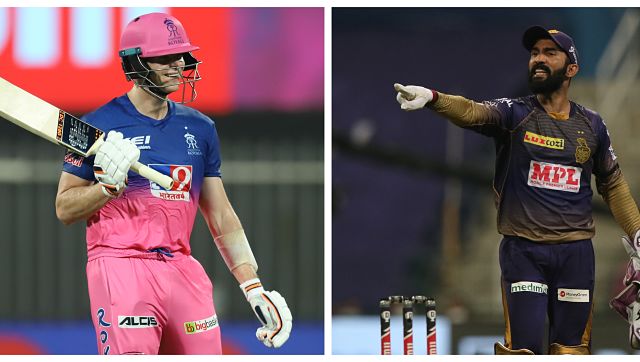 So that's that from us today as well. A good win for KKR, as they collect two more points. They open their account in Dubai as well and it seems with the variety they have in the bowling department, they should look to defend more in Dubai. RR did not play as a unit today and would like to regroup before the next game. Tomorrow, Kings XI Punjab play Mumbai Indians at Abu Dhabi. See you tomorrow at 5.30 pm, as we build up to the game at 7.30. For now, take care and good night.

Shivam Mavi: The ball was seaming when I started off, so decided to stick to my lengths and focused on it. It initially seemed to be a little flat. Stuck to a normal length after seeing the ball seam around a bit. I’ve played against these guys before and knew what shots they like to play, and the ball wasn’t coming on to the bat as nicely.

Shivam Mavi is the Player of the Match for his haul of 2/20 from his quota of four overs!

Dinesh Karthik, KKR captain: I would not call it a perfect game, a lot of areas to work on. It was a good game. The way Gill started, the way Mavi bowled and Russell started was good to see. Archer bowled very well. It was not that easy a wicket to bat on and made it look easier than it was. I keep saying these boys the journey they have been through, for them to come out there and express themselves is really special. We would have batted first, that was our plan, to put runs on the board.

Steve Smith, Rajasthan Royals captain: Didn’t quite go to plan, but that happens in T20 cricket sometimes. Few areas to improve on. I think it could go one way or another. We planned to put their death bowling under pressure. Lost too many wickets upfront. Keep moving forward, and it could get better. (On adapting to Dubai conditions) Yeah probably didn’t adapt as well as we could have, and dropped a few catches which cost us. It’s about trying to form whatever XI is the best for us. (On battle with Cummins) Wasn’t a great battle was it? I had a chat with him earlier and he told me, “You normally smack those in the nets!”

KKR win by 37 runs. RR lose their first game. Fifty for Curran with the bat is a big positive for RR from the match apart from that Archer spell. Nothing inspiring really other than these two performances. KKR collect two more points. Very satisfying performance from the young players. DK should be a happy captain.

FOUR! Curran finishes the match with a boundary, steps out and hits it to deep extra cover region for four runs.

SIX! Rajpoot joins the fun and smashes Kuldeep over long on for a big six after stepping out.

Narine finishes his spell but his last over has fetched 20 runs for RR. Curran hitting three big sixes to complete his fifty. Rajasthan Royals need 49 runs in 6 balls.

SIX! Fifty for Curran as well with that big six over deep mid-wicket.

Shivam Mavi is the Player of the Match for his haul of 2/20 from his quota of four overs!

KKR win by 37 runs. RR lose their first game. Fifty for Curran with the bat is a big positive for RR from the match apart from that Archer spell. Nothing inspiring really other than these two performances. KKR collect two more points. Very satisfying performance from the young players. DK should be a happy captain.

OUT! Last ball of the over, short ball and Unadkat tries to go over deep mid-wicket but connects poorly, and gets caught by Nagarkoti, who is not dropping anything tonight. The umpires called the batsman back as the ball it seemed had touched the Spidercam cables before being caught but there was nothing conslusive found from many camera angles. Unadkat c K Nagarkoti b Kuldeep Yadav 9(13)

OUT! SUPER Catch from Nagarkoti, runs some distance as the ball was high up in the air, came running in from long on and caught it brilliantly after putting in a dive. Jofra Archer c K Nagarkoti b Chakravarthy 6(4)

OUT! Gopal gone. DK went upstairs for a caught behind review and Ultra Edge showed that the ball was touching the gloves before hitting the thigh and bouncing up for DK to catch it. RR are now seven down. Shreyas Gopal c Karthik b Narine 5(7)

OUT! Tewatia wanted to go big over the covers but he was tricked by Varun in the air, and missed the ball completely. Six down now RR. Rahul Tewatia b Chakravarthy 14(10)

OUT! Gill plucks it inches above the ground, a top catch to remove Riyan Parag who cut it hard off Nagarkoti. Umpires went upstairs with the soft signal being out and the replays showed clearly that the ball was cleanly caught. RR five down and in all sorts of trouble. Riyan Parag c Shubman Gill b K Nagarkoti 1(6)

OUT! Kamlesh Nagarkoti, right-arm fast, comes into the attack and gets a wicket on the first ball of the spell. Short ball, was there to be hit, and Uthappa pulls it to the man at deep backward square leg for a simple catch. Uthappa c Shivam Mavi b K Nagarkoti 2(7)

OUT! Big wicket this, brilliant from KKR, top field placement from DK, wide slip and Mavi bowls a widish line, Buttler throws his bat at it and edges it to the fielder placed there. Great total cricket from KKR. Buttler c Chakravarthy b Shivam Mavi 21(16)

OUT! Not Sanju's day today, Mavi gets his wicket, he angles it in, no room really, but Samson swings across the line, does not connect and give s a dolly to man at mid-wicket. Samson c Narine b Shivam Mavi 8(9)

OUT! Well, well, well, third time lucky for Cummins, he almost got Smith out on the previous two deliveries but he came back strongly to remove him eventually, short ball, Smith attempted a heave and ended up edging it to Karthik behind the stumps. RR one down early. Smith c Karthik b Cummins 3(7)

OUT! Fine catch by Sanju Samson at fine leg as Cummins perishes while attempting to cut a slower bouncer from Curran, hardly getting any timing on it. KKR 149/6

OUT! Huge wicket for Rajasthan Royals as Ankit Rajpoot nets the big fish! Russell tries steering the wide, overpitched delivery for a maximum over deep backward point, but the long boundaries at Dubai mean the fielder at the deep is always in play, with Unadkat collecting it safely. KKR 115/5

OUT! Superb delivery by Archer to get rid of Karthik as the KKR skipper gets square up by a delivery that angles slightly away to clip the outside edge, before settling in Buttler's gloves! KKR 106/4

OUT! Gill falls short of what would've been a second consecutive half-century in IPL 2020, a leading edge resulting in the ball ballooning up in the air, with Archer collecting it safely in the end. KKR 89/3

OUT! Tewatia strikes for RR as the innings approaches the halfway mark, Rana holing out to Parag at long off after getting tempted by a loopy delivery from the Haryana leggie. KKR 82/2

OUT! Unadkat finally gets Narine! The Trinidadian fails to pick the slower ball from the left-arm seamer, and ultimately hears the death ratte behind him as his stay at the crease comes to an end. KKR 36/1

IPL 2020 LIVE SCORE, Rajasthan Royals vs Kolkata Knight Riders: KKR win by 37 runs. RR lose their first game. Fifty for Curran with the bat is a big positive for RR from the match apart from that Archer spell. Nothing inspiring really other than these two performances. KKR collect two more points. Very satisfying performance from the young players. DK should be a happy captain.

Preview: A high on confidence Rajasthan Royals will look to continue their winning momentum when they face Kolkata Knight Riders in the 12th match of the ongoing Indian Premier League (IPL) on Wednesday.

RR have enjoyed an electric start to their IPL 2020 campaign, winning both of their opening matches in some style. While they beat CSK by 16 runs after posting 216 runs on board batting first, Sanju Samson and Rahul Tewatia stole the limelight as the Jaipur-based franchise chased down a record target of 224 against Kings XI Punjab on Sunday.

Tewatia, who was on 17 from 23 at one stage, had a dream outing against the Punjab franchise, going on to slam 53 runs off just 31 balls to perfectly set-up the platform for an RR win. He and Samson built a 61-run stand for the third wicket before the Kerala batsman was dismissed by Mohammed Shami. And although Tewatia and Riyan Parag were dismissed later on, the English duo of Jofra Archer and Tom Curran held their nerve to beat KXIP by four wickets. Rajasthan Royals scripted the highest-ever successful run chase in the IPL, when they overcame KXIP. Sportzpics

Samson, who has scored 74 and 85 in the first two games, will continue playing an important role in RR’s batting lineup, and as always, much will be expected from him as well as skipper Steve Smith, who has also enjoyed a positive start with scores of 69 and 50.

Jos Buttler played his first game for RR this season against KXIP after serving his mandatory quarantine coming from England, and will be one to watch out for despite failing to impress in that clash.

The experienced pace duo of Archer and Jaydev Unadkat, however, are yet to fire, and will be hoping to make an impact in the game.

Meanwhile, KKR are coming off a thumping win over Sunrisers Hyderabad, as Shubman Gill’s knock of 70 propelled them to chase down 145 with two overs to spare.

KKR boast of Eoin Morgan and Andre Russell - two reliable batsmen who could be a threat for bowlers on their day. There were even talks of Russell being promoted up the order before the tournament, but the team management have so far not given any intention of doing so. Russell came out to bat at No 6 in the first game against Mumbai Indians, while KKR did not have to rely on him for the chase against SRH.

While Pat Cummins went wicketless for 49 runs in KKR’s contest against MI, he did pick up a wicket against SRH, finishing with figures of 1/19. It may be just the initial stages of the campaign, but Kuldeep Yadav has endured a silent start, remaining wicketless in the two matches.

Here's all you need to know about when and where to watch the RR vs KKR game:

When is the IPL match between RR and KKR?

The match between RR and KKR is on Wednesday, 30 September 2020.

Where will the RR vs KKR match be played?

The match will be played at the Dubai International Cricket Stadium in Dubai.

What time does the RR vs KKR match start?

Which TV channels will broadcast RR vs KKR match?

All the IPL matches will be shown live on Star Sports India channels and games can also be streamed live on Disney + Hotstar. You can also catch LIVE updates on Firstpost.com.