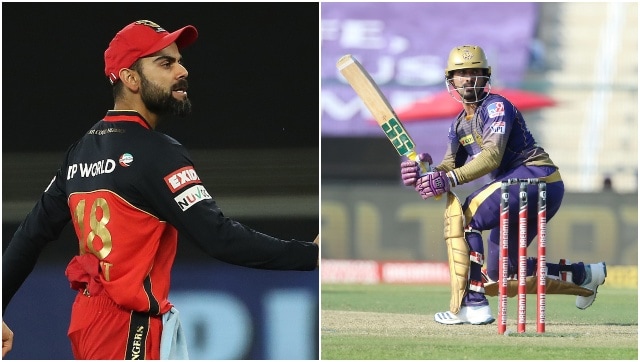 RCB have outplayed KKR, in all the departments of the game. That's it from us today, but do join us tomorrow for the live coverage of CSK's clash against SRH at Dubai. Adios!

AB de Villiers: I’m very happy with the performance, that’s all I can say. Very happy that I contributed, and I surprised myself out there, I must say. I knew the wicket was very tough to bat on, but I thought 130-140 wouldn’t be enough. Was very surprised with the total we ended up with. The boundaries are very small and you need to use every bit of energy available to try and keep the momentum going. I really just tried to keep the energy going with the boys. You have a very good view as a wicketkeeper. I’m really enjoying it. I do bounce off ideas to the bowlers from time-to-time as well. It’s different skills completely. I worked really hard leading up to this to ensure I’m up to the standards.

RCB captain, Virat Kohli: Coming here, it was important to get the right start. It’s great to see individuals step up, Just the way Chris Morris bowled after coming in, Washi, Chahal too. This is one of our most comprehensive wins. Barring that one super human (AB de Villiers), everyone really struggled. The bowling coach has worked hard with us, there is clarity of plan. The intensity this time around is really good. If your bowling unit is strong, then you have a chance of winning. De Villiers hit the ball so beautifully, its only he who can strike late that. He’s dangerous and it was a special knock. We were thinking 160-165, but we got 190. We’ll have a run-down session of this match tomorrow. We just don’t want be complacent, want to be hungry and have that zing to win watches.

Largest defeats for KKR in IPL - by runs:

Dinesh Karthik, KKR captain: (On ABD) He’s a world-class player, plays some great shots. The only thing that probably works against him is a yorker, anything else, he hits it out of the park. I think we need to sit down and make sure there are a few things we could do better. We have a break, so we need to start off fresh after that. If you get it easy, it’s not going to be IPL for you. (On batting first) We need to see as the tournament folds out how that goes out. Every captain has a day when things go wrong, but I don’t want to read too much into it.

Udana is bowling the final over of the innings. Bowls back to back yorkers off the second and third. Good fielding effort in the deep on the off-side by Siraj, who saved a couple of runs there.

DONE AND DUSTED! RCB have not put a foot wrong here. They have beaten KKR by a huge margin of 82 runs. Comprehensive win this!

Morris into the penultimate over of the innings. Gotta feel for KKR’s lower order, they have to face the pacers now. Morris removes Nagarkoti on the last ball. RCB have not put a foot wrong so far! Four runs off the over.

OUT! Inside edge, Nagarkoti looks to play across the line and the ball dislodges his stumps. Morris gets the breakthrough.  K Nagarkoti b Chris Morris 4(7)

Saini into the 18th over of the innings. The match is in RCB’s pocket already. Virat Kohli and his men are giving their all in the fielding department. Not giving any freebies whatsoever. A referral for a catch off the final ball, Virat Kohli is the man involved, who dived to his front. But it gets turned down by the umpire. Five runs off the over.

Udana is bowling the final over of the innings. Bowls back to back yorkers off the second and third. Good fielding effort in the deep on the off-side by Siraj, who saved a couple of runs there.

DONE AND DUSTED! RCB have not put a foot wrong here. They have beaten KKR by a huge margin of 82 runs. Comprehensive win this!

OUT! See you later, Dre Russ! A yorker gets Udana the breakthrough. The burly Trinidadian went for the wild slog once again, but hit it straight to Siraj. The game’s sealed here, you have got to believe that, unless there’s a miracle. Russell c Siraj b Udana 16(10)

Morris is back. Good captaincy so far by ‘King’ Kohli. Starts off with a dot. Tripathi nudges the second ball for a single. Padikkal puts in a fantastic dive, almost catches the ball at long on. Dre Russ was the man in danger. Catches win you matches! RCB will hope Dre Russ doesn’t add insult to injury here. Can you believe it? Just two runs from Morris’s over, at this stage of the game. And we go into time out!

OUT! Morgan cuts but finds Udana at short third. Regulation catch for the Sri Lankan. Washington Sundar gets the breakthrough! Talk about spinning a web, RCB spinners are on fire here. Morgan c Udana b Washington Sundar 8(12)

OUT! Inside edge, the ball goes on to dislodge the stumps. RCB and Chahal will happily take that. Remember, he was the man of the match in KKR’s last outing. Karthik b Chahal 1(2)

SIX! Length ball from Russell next up, and De Villiers goes big straight down the ground to bring up his half-century off just 23 deliveries at a stunning strike rate of 230! RCB 158/2

SIX! After a couple of good balls, Cummins fires a full toss that gets appropriately smacked towards wide long on for a flat six! Brings up the fifty stand with Kohli with that shot! RCB 147/2

OUT! Finch misses out on his half-century by just three runs as he gets his middle stump rattled by a yorker from Krishna that angles into the batsman after starting from the off stump. RCB 94/2

BOWLED EM! Made a complete mess of the furniture, as Dre Russ, as Padikkal departs after a healthy start! Flattens the middle stump with a well-aimed full delivery, and that's 300 wickets for Russell across T20s. Also time for a strategic timeout! RCB 67/1

Fifty partnership up between RCB openers Finch and Padikkal off 38 deliveries, the former coming back for a second run off the second delivery after the conclusion of the powerplay to bring up the milestone. RCB 50/0

Tom Banton has received his cap from England captain Eoin Morgan, and that is the one confirmed change that we have for today so far.

IPL 2020 LIVE SCORE, Royal Challengers Bangalore vs Kolkata Knight Riders latest updates: Udana is bowling the final over of the innings. Bowls back to back yorkers off the second and third. Good fielding effort in the deep on the off-side by Siraj, who saved a couple of runs there. DONE AND DUSTED! RCB have not put a foot wrong here. They have beaten KKR by a huge margin of 82 runs. Comprehensive win this!

Preview: Royal Challengers Bangalore (RCB) and Kolkata Knight Riders (KKR) will hope to maintain their winning momentum when they meet each other at the Sharjah Cricket Stadium on Monday.

KKR and RCB moved to the third and fourth spots respectively after registering contrasting victories in their respective matches in the Saturday double-header. Kolkata were well on their way to suffering a massive defeat at the hands of Kings XI Punjab (KXIP) when a couple of wickets in the middle overs led to a dramatic turnaround, with Punjab falling just two runs short of the KKR total of 164/6 despite a century opening stand.

RCB, on the other hand, were comprehensive against the struggling Chennai Super Kings (CSK) as skipper Virat Kohli led from the front, blasting an unbeaten 90 before the bowlers, led by franchise debutant Chris Morris (3/19) and Washington Sundar (2/16), kept MS Dhoni and Co under check. Bangalore walked away with a healthy 37-run victory — only their second victory against their southern rivals in nine games and their fourth in six this season.

Heading into the 28th match of IPL 2020 — which will mark the halfway stage of the league phase this year — Kolkata certainly have more to worry as far as their players are concerned, with veteran off-spinner Sunil Narine having been reported for suspect action following the KXIP-KKR clash as well as Jamaican superstar Andre Russell’s hot-and-cold run with the bat this season.

While Narine continues to impress with his pinch-hitting abilities this season — initially at the top of the order before being used as a floater down the order to accommodate Rahul Tripathi at the top — he played a key role in his team’s victories in their last two outings by drying up the runs in the middle and the slog overs.

Should he be reported again, Narine faces a bowling ban that could come as a body blow to Dinesh Karthik’s plans as the two-time champions look to reduce the gap between them and Delhi Capitals and Mumbai Indians — the top two on the points table at the moment.

Live Score, IPL 2021, CSK vs PBKS Cricket Score: Bravo's second over. Rahul hits the first ball over square leg to Gaikwad in the deep, who does well on the boundary line to prevent two runs. Oh, wonderful flick from KL Rahul, he did that so nonchalantly to clip it for six beyond Chahar at fine leg! Wide and then yet another SIX, this one hammered over long-on! Cometh the hour, cometh the man! KL Rahul is doing absolutely everything in his power to give Punjab a shot at playoff qualification. Rahul then nudges to long on and runs a quick two. Wide and two singles to end the over.