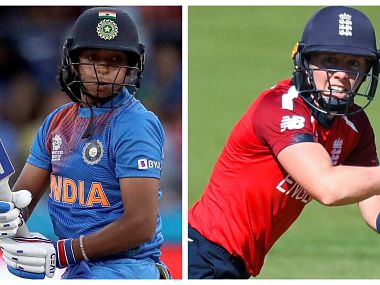 India are through to the final of the ICC Women's T20 World Cup. By virtue of topping their group and the fact that there is no reserve day, India will take take on either South Africa or Australia on 8 March. Tough luck for England! India, on the other hand, would have loved to have a crack in the middle, especially given the kind of form that they are in but the results are still in their favour. That's it from us today but do join us for the final on Sunday. See ya!

England captain Heather Knight: Very frustrating and not the way we wanted our tournament to end. An exciting spin group we have discovered here. Biggest learning from this competition? Win your first game obviously.

India captain Harmanpreet Kaur: In the future, there should be a reserve day. From Day 1, all teams knew about the no reserve day policy so we wanted to win every game and not leave anything to chance.

That's it. The match has been abandoned and India are through to the finals by virtue of topping their group's points table. No reserve day as well. Tough luck for England!

For the first time in their history, India have qualified for the Women's #T20WorldCup final 🇮🇳 pic.twitter.com/88DHzqTbnK

The Indians will also take confidence from the win against England in the tri-series in Australia ahead of this World Cup.

Firm title contendors, India would aim to dish out a solid all-round performance against formidable England. Read the preview here

England captain Heather Knight feels tackling Indian spinners, particularly the in-form Poonam Yadav, will be the key to success in their semi-final clash.

The fans are out at the iconic SCG, they're waiting for some good cricket but will have to wait some more time for the toss.

India have lost the most number of matches against England than any other team in Women’s T20Is.

India have lost each of the five matches that they played against England in Women’s T20 World Cup before today.

TOSS has been delayed due to rain

Glum faces in the England camp at the moment. Live visuals aren't encouraging at all. According to regulations, a minimum of 10 overs per side is needed to have a shortened game.

Remember, India will be through to the finals if the downpour continues by virtue of finishing higher on the points table since there is no reserve day.

The Indians are on a roll, having sealed their semi-final berth with wins over defending champions Australia (by 17 runs), Bangladesh (by 18 runs), New Zealand (by 4 runs) and Sri Lanka (by seven wickets).

England, on the other hand, did not have a great start to their campaign, suffering a six-wicket defeat against South Africa. However, they came back strongly to register convincing wins against Thailand (by 98 runs), Pakistan (by 42 runs) and West Indies (by 46 runs).

Hello and welcome to our LIVE coverage of the first semi-final of the ICC Women's T20 World Cup 2020 between Harmanpreet Kaur-led India and Heather Knight's England at the Sydney Cricket Ground. The Women in Blue will aim to etch history, having never reached a T20 World Cup final in the tournament's 11-year history. Meanwhile, England have reached the final thrice (2012, 2014 and 2018) since winning the inaugural tournament in 2009, finishing runners-up on all three occasions. Stay tuned for more updates as we bring you LIVE action!

Latest Updates, India Women vs England Women, ICC Women's T20 World Cup semi-final: That's it. The match has been abandoned and India are through to the finals by virtue of topping their group's points table. No reserve day as well. Tough luck for England!

Like in 2018, India find themselves in the semi-finals and up against England. Harmanpreet Kaur's team have had a smooth run up to the last four stage, winning all their games in the group stage. England, on the other hand, had a bad start to their tournament, losing their first clash against South Africa. However, they made quick amends and won the remaining three matches to cement their place in the semis.

England know they have a better Indian side up against them than the one they had faced in 2018, which was a team under development. With the form that Indians are in, it will be a huge task for England to stop them.

One more concern for England will be the weather. In case the match is washed out, India will be through to the final on basis of better performance in the group stages as there are no reserve days for the two semis. Weather in Sydney has not been great for cricket, with rain pouring intermittently for the last two days. England will be praying for a bright and sunny morning on 5 March.

For India, Shafali Verma, now the World No 1 T20I batswoman, Shikha Pandey, Poonam Yadav and Taniya Bhatia have been the top performers and the team will be hoping they continue to be good in the semis. Harmanpreet too will be looking to make her presence count as she has not delivered so far in the tournament.

England will hope Natalie Sciver maintains her top form and Sophie Ecclestone blows away the threatening Indian top order. A high-octane contest, if weather permits, is up for grabs on 5 March.

Here's all you need to know about the 1st semi-final between India and England.

When is the first semi-final between India and England?

The 1st semi-final between India and England will take place on 5 March, 2020.

The match will be played at the Sydney Cricket Ground in Sydney.

The match begins at 9:30 AM IST with toss taking place at 9 AM IST.

The match will be live-streamed on Hotstar. You can also catch the live score and over-by-over updates on Firstpost.com.

Meanwhile, the silver lining for the day was that the single-day rise in coronavirus cases stood at 2.63 lakh, the lowest in 28 days, according to the Union health ministry data updated on Tuesday

Coronavirus News Updates: According to the health department, the state's toll has now reached 4039 and the districts reporting the highest number of fresh fatalities were Patna (14), West Champaran (10), Muzaffarpur (9) and Nalanda (7)