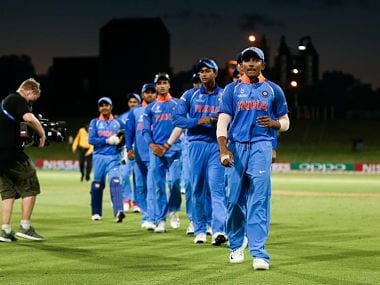 So India complete a clinical ten-wicket win over Papua New Guinea. No surprises there, but the ruthlessness of Indians stood out. There was no dip in intensity from the pacers,and Anukul Roy, the left-arm spinner, walked away with a five-for on a pitch made to assist the fast men.He bowled with lot of guile, and had the opposition in knots. Mavi and Nagarkoti were sharp, but they would do well to get their lengths right. India also were a bit below par in fielding, and coach Rahul Dravid would have surely taken note. India's reply was swift and serene, with skipper Prithvi Shaw's fifty leading the charge. He is the one to watch out for, and hopefully we will here more of him in coming years. For the record, the entire match lasted just 29.5 overs!

Table-toppers India will next play Zimbabwe on Friday, which means another early start for us here! Do join us with our coverage. Untill then, it's goodbye from all of us.

Meanwhile, it promises to be a cracker in Centurion today. If you are looking for more cricketing action before Virat Kohli's men take field, follow the fourth ODI between New Zealand and Pakistan here.

Roy was spectacular with his spin. Recieving the award from Jeff Crowe would have made the youngester happy.

His fantastic 5/14 set up a rapid India victory - Anukul Roy is the #INDvPNG Player of the Match! 👏 #U19CWC pic.twitter.com/HeqOriH4mz

Two big wins to start the tournament. It has been a real Shaw of strength by India so far #U19CWC

Prithvi Shaw, IND captain: I don't think our guys were relaxed. They gave it their best. We are always talking about process and not the result. All the coaches and support staff are very experienced and they keep us fit. Honoured to play with such a support staff. Really not thinking about that (being qualified).

Vagi Karaho, PNG captain: Good experience for us. First time so tough for us, hopefully we take a lot from this. The coaching staff helps us a lot to take us this far. We went to Brisbane for a camp. Quiet challenging for us.

Anukul Roy is named the Man of the Match for his career-best figures: Was feeling good. Kept my body warm and was well prepared.Feeling good, feeling very confident.

So Prithvi Shaw's evisceration of the PNG bowlers has capped a perfect day for India,  the only blemish lying in the fact that his innings was not chanceless. Anukul Roy's maiden five-for had set it up, but then Shaw played like India had a flight to catch. It's PNG who will be flying out though. India now looking ahead to playing Zimbabwe on Friday.

11 from this Tau over means India have eased to a clinical ten-wicket win. They also top the group. Anukul Roy starred with a five-wicket haul and it was all Shaw show thereafter.He hit two fours this over, the last of which - a slap over covers - brought up India's win.

FOUR! Back-to-back boundaries and it means India have cantered to an easy 10-wicket win. Shaw scores 57 of the 67 runs that India made. Superb win!

FIFTY! That boundary brings up Shaw's fifty. That's a half-volley on legs from Tau and Shaw flicks this. India almost home.

11 from this Tau over means India have eased to a clinical ten-wicket win. They also top the group. Anukul Roy starred with a five-wicket haul and it was all Shaw show thereafter.He hit two fours this over, the last of which - a slap over covers - brought up India's win.

ALL OUT! Five-for Anukul Roy! The left-arm spinner gets the final wicket after going over the wicket to the left-handed batsmen bowls it slower through the air and beats his outside edge as the ball knocks on the off-stump. Semo Kamea b Anukul Roy 0(3)

OUT! Kevau is drawn into the drive as he checks his shot with the ball coming on slower than expected. Simple catch for Gill in the covers.

OUT! That's gone through the gate! James Tau played for the spin while the ball sneaked through the gap between bat and pad. Falling apart here.

OUT! Bowled! Straight and simple. Morea was never going to dig that out. Bowled the yorker over 140ks as his innings comes to an end.

OUT! Easy-peasy. Sam seemed to be giving some catching practice. Finds Mavi who is positioned at mid on, slightly deep mid on. Gifted his wicket away in a temptation to loft the ball in the air.

OUT! And just as when the duo were getting some time in the middle.. they lose another wicket. Half-their side back in the hut with just over 15 overs. Roy hits the off-stump.

DROPPED! Mavi the fielder at fine leg has plenty of time to get under the ball but never looked confident of taking it. Sure, the strong wind must have played its part in the indecision. Arua came out of his crease and looked to hit towards midwicket but instead got a top edge.

OUT!  Ovia Sam, the new batsman, tucked it on the leg side, non-striker, Atai took a couple of yards and started running only to be sent back, Nagarkoti picks up and throws! Direct-hit! End for Atai. My word, It was brilliant, absolutely brilliant, piece of fielding.

OUT! Well, that was as good as a yorker you will see! Tailed back in slightly bowled at 140 clicks, Heagi Toua had absolutely no answer to that. Mavi gets his second wicket.

OUT! Shivam Mavi strikes! Mahuru was beaten neck and crop. Clearly beaten for pace there with the ball jagging back in. The bat came down late and he looked like a dead duck.

Toss update: Prthivi Shaw has won the toss and he asks PNG to bat first.

ICC Under-19 World Cup 2018 IND vs PNG, latest updates: 11 from this Tau over means India have eased to a clinical ten-wicket win. They also top the group. Anukul Roy starred with a five-wicket haul and it was all Shaw show thereafter.He hit two fours this over, the last of which, brought up India's win with a slap over covers.

Preview: India and Papua New Guinea (PNG) could barely have had more contrasting starts to the tournament. While India’s opening game was an almost-complete performance over much-fancied Australia, Papua New Guinea were thrashed by Zimbabwe in a rain-shortened clash, which means they must win to keep their quarter-final hopes alive.

India meanwhile will want not just to win, but to lay down a marker to make sure all the other teams know to be afraid of them. Their one worry will be the fitness of fast bowler Ishan Porel, who hurt his ankle after slipping in his delivery stride against Australia. He will be sent for a scan, but India may well look to rest and rotate regardless of the results. Most of the pre-match hype was around Prithvi ‘the new Sachin’ Shaw and his band of batsmen. But while they didn't disappoint, perhaps most eye-catching was the pace at which India’s quicks bowled, with Australia largely unable to cope. Skidding the ball on from a low height, with a smooth action and braced front leg, Kamlesh Nagarkoti was the pick and quickest of the bowlers. With Ishan Porel an injury doubt, Nagarkoti may take the new ball, and since PNG will never have faced a bowler nearly as quick as him, he could cause havoc.

All PNG’s batsmen struggled against Zimbabwe, but Ovia Sam looked the most assured, and also the most likely to succeed in a full-length innings, relying on risk-free singles and doubles - his 24 came at better than a run a ball despite containing no boundaries. With India unlikely to offer many loose deliveries, the ability to rotate the strike will be crucial.

India and PNG have faced off three times in the ICC Under 19 Cricket World Cup, India winning by over 100 runs each time, PNG dismissed for less than 100 every time.

There are showers forecast for the morning in Tauranga, but these are set to stop by the time play starts in the afternoon, though clouds may remain.

This article first appeared on ICC-Cricket.com