Who is Jaidev Thackeray, Uddhav’s brother who pledged support to Eknath Shinde at the Dussehra rally?

Uddhav Thackeray suffered yet another blow in the fight for Shiv Sena’s legacy when his estranged brother Jaidev endorsed Eknath Shinde at the Dussehra rally. The middle son of Bal Thackeray, Jaidev’s rift with the family grew after the death of his mother and separation from his wife Smita

In the Shiv Sena vs Shiv Sena saga, there have been more downs than ups for party president Uddhav Thackeray. Even as he continued the Sena tradition by holding the Dussehra rally at Mumbai’s Shivaji Park, Uddhav suffered another blow. Maharashtra chief minister and Sena rebel Eknath Shinde held a parallel rally at Bandra Kurla Complex and joining him was Uddhav’s brother Jaidev Thackeray.

“For the last week, everyone has been asking me if have joined the Shinde camp. Thackerays can’t be in any faction. I like the ideas put forth by Shinde. I have come here out of love for him,” he said at the event organised by Team Shinde.

Also read: Uddhav Thackeray: A look at the big wins and the biggest lost

Bindumadhav died in a car accident on 20 April 1996 at the age of 42 when he was returning from a holiday in Lonavala.

Jaidev, the middle son, is estranged from the family. The trouble started in the early 1990s when Jaidev separated from his first wife Jayashree Kalelkar, daughter of a Marathi litterateur. The couple has a son and Bal Thackeray felt that the fallout of this relationship hurt the family.

Jaidev then married Smita Thackeray, who now runs a production house and a non-profit organisation Mukkti Foundation. At one point, Smita was very influential in the Thackeray household. The couple is now divorced and has two sons Rahul and Aishvarya.

After the death of Meentai in September 1995, the rift between the father and son grew. Jaidev moved out of the Thackeray family home, Matoshree, in the late 1990s because of growing differences with Smita. However, she continued to live on the first floor of the residence until her divorce was finalised in 2004, reports ThePrint.

Jaidev now lives with his third wife Anuradha with whom he has a daughter Madhuri. He has an artistic bend and does paintings on black canvases and wood carvings. 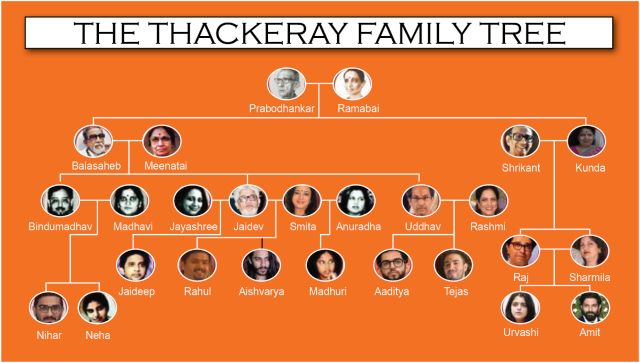 Jaidev vs the rest of Thackerays

Jaidev has largely stayed out of politics. His relationship with his father was complicated and once in an interview with the party mouthpiece Saamna, Bal Thackeray said, “That boy is a tragedy.”

However, the Sena supremo visited his estranged son in hospital years after he moved out and he went to his home, in Kalanagar in suburban Mumbai, to inaugurate a collection of smoking pipes.

Like senior Thackeray, Jaidev too is witty. At the exhibition, Jaidev put up photographs of well-known smokers. He pointed to a picture of Nehru and said that he was a “chaalu man (cunning man)”. The Sena supremo pointed to his own photograph and asked, “Is he also chaalu?” The son replied, “No. Because of him, many Marathi chullahs (stoves) are still chaalu (running in Marathi)”, according to a report in The Times of India. Jaidev Thackeray and Uddhav have their differences. The elder brother had said that Uddhav influenced their father Bal Thackeray’s will but later withdrew the suit challenging it. PTI

However, the divide between the two was difficult to bridge. After Bal Thackeray’s death, Jaidev challenged his father’s will in the Bombay High Court only to withdraw it in November 2018.

The Sena patriarch had not left a farthing for his estranged son. The suit was filed after Bal Thackeray’s death in November 2012. Jaidev disputed the will, saying his father was of “unsound mind” and that the Sena chief’s other son, Uddhav Thackeray, had influenced him.

While Bal Thackeray bequeathed a majority of his property to Uddhav and his immediate family members, the first floor of the family bungalow went to Aishvarya and Smita. In 2016, Jaidev said that Aishvarya was not his son. “…I have wanted to set the record on Aishvarya’s paternity straight for a while now but have not got a chance,” he said.

As the case was being fought in court, Jaidev made another allegation. He said that in 2005, Uddhav conspired to remove his name from the family ration card. He claimed that despite such instances he tried to maintain a cordial relationship with his brother who did not return his calls.

He also told the court that he was close to his father in the 1970s and Bal Thackeray had started looking at him as his political heir. “But I wasn’t comfortable as a politician is required to speak harshly even to his friend,” he said.

However, Jaidev filed an affidavit in 2018 saying that he wanted to close the suit opposing probate of the will in favour of Uddhav Thackeray and four other family members. He did not assign any reason for withdrawing it.

While Jaidev has steered clear of politics, his backing of Shinde is not good news for Uddhav.

“Maharashtra needs a man of such courage. I have come here today out of my love for Eknath. Don’t let him get alone. Give him your support,” Jaidev said at the rally on Sunday. 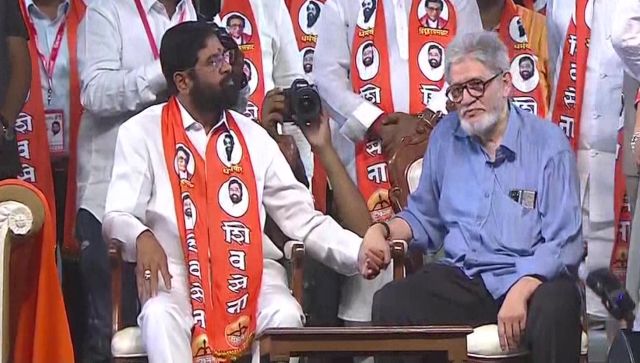 At the rally held in Mumbai’s Bandra Kurla Complex, Jaidev said, “Don’t let Eknath be alone. You all should support him.” ANI

The Thackerays in Shinde camp

Jaidev, of course, is not the only Thackeray who has backed Uddhav’s rival. Smita Thackeray was also present at the rally.

In July, Smita was the first member of the Thackeray family to meet Shinde. Said to have differences with Uddhav, the former Thackeray bahu said that the meeting was a courtesy call.

Smita was once close to Bal Thackeray and her clout grow in the family after the death of Bal Thackeray’s wife. She also influenced some of Sena’s political decisions but when Uddhav started taking an interest in politics, she was forced to take a step back. Eknath Shinde has the support of Jaidev’s estranged wife Smita and Bindumadhav’s son Nihar. Both were present at the rally. Image courtesy: @mieknathshinde/Twitter

Apart from Smita, Bindumadhav’s son Nihar Thackeray was at the rally. He joined Team Shinde aiming to enter active politics under the Maharashtra CM’s guidance.

The fight for Sena’s legacy continues and Uddhav has been suffering one setback after another. At the Dussehra rallies, both factions attacked each other. Shinde asked Uddhav to introspect why so many of his MLAs and party leaders deserted him. “If you look at everything that happened so far, you will see Raj Thackeray and Narayan Rane have left. Smita Thackeray and Nihar Thackeray are sitting right here,” Shinde said.

The numbers currently do not favour Uddhav. And he certainly has a lot of thinking to do.