Since coming to power in 2014, Prime Minister Narendra Modi has ushered in a sea change.

From promoting yoga around the world to laying the foundation of the first-ever Hindu temple in Abu Dhabi, the PM has been an ambassador of Indian culture on the global stage.

Today, on his 72nd birthday, let’s take a closer look:

Modi has been unflagging in his promotion of yoga, the 5,000-year-old Indian physical, mental, and spiritual practice that aims to transform body and mind, even before taking office.

Here is a speech from 2013 in which I talk about various aspects of Yoga & why it is unique. https://t.co/ncEdZujBRv

Then, in 2014, during his speech at the United Nations General Assembly (UNGA), Modi put forth the idea of an UN-mandated International Day of Yoga.

“Yoga embodies unity of mind and body; thought and action; restraint and fulfilment; harmony between man and nature; a holistic approach to health and well-being,” Modi had said.

In suggesting June 21 as the International Day of Yoga, Modi had said that the date, one of the two solstices, is the longest day in the Northern Hemisphere and has special significance in many parts of the world. Prime Minister Narendra Modi performs yoga along with thousands of others at a mass yoga session to mark the International Day of Yoga in 2015 at Rajpath in New Delhi. PTI

Less than three months later, the UN General Assembly adopted an India-led resolution declaring 21 June as the International Day of Yoga, recognising that “yoga provides a holistic approach to health and well-being”.

The resolution, introduced by India’s then-ambassador to UN Asoke Mukerji, had 175 nations joining as co-sponsors, the highest number ever for any General Assembly resolution.

It was also the first time that such an initiative has been proposed and implemented by any country in the UN body in less than 90 days.

Modi has since consistently promoted yoga on his Mann Ki Baat radio programme and spoken about its benefits.

In August, External Affairs Minister S Jaishankar said a country’s soft power reflects the creative urges of its society and the government can help only in advancing that.

“Certainly, the government can enable it more and one of its examples is the International Day of Yoga,” he said. He said the Gulf, North Africa and Central Asia are parts of the world where probably the Indian soft power is the strongest as culturally people identify more readily.

“Until 2014, it was not that people did not do yoga abroad. But once (Prime Minister Narendra) Modi ji got this inspiration that we must make it an international celebration,” he said, adding then a resolution was passed in the UN unanimously to declare it the International Day of Yoga.

Jaishankar said he thinks International Yoga Day is the single day that has the largest cultural celebrations in the world. “It should be an inspiration to us to do more,” he added.

In 2018, Modi laid the foundation stone of the first-ever Hindu temple in Abu Dhabi. The BAPS Shri Swaminarayan Mandir of Abu Dhabi in UAE is being built by the BAPS Swaminarayan Sanstha.

This was after the UAE government decided to allot a plot of land near Abu Dhabi for the construction of the temple during Modi’s first visit to the West Asian country in 2015.

Modi in 2018, in the presence of over 1,700 Indian and Emirati dignitaries from all walks of life, unveiled a model of the traditional stone temple. 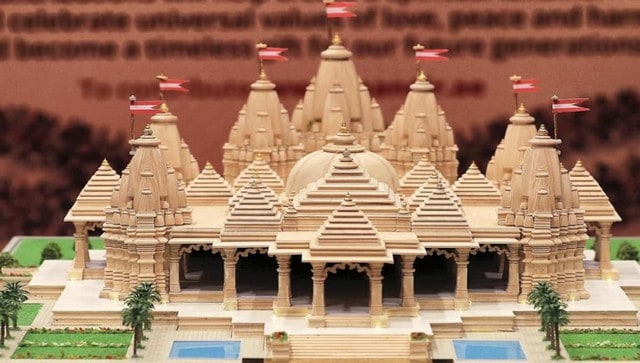 The replica model of the temple. News18

“The first traditional temple in Abu Dhabi will act as a catalyst for the flourishment of humanitarian values and harmony between the two countries. The temple will become a medium for India’s identity”, Modi said at the time.

There has been a regular exchange of high-level interaction between India and UAE in 2022. PM Narendra Modi paid a visit to Abu Dhabi on 28 June and met UAE President Sheikh Mohammed bin Zayed Al Nahyan.

Prior to that, both leaders had also held a virtual summit on 18 February during which India-UAE Comprehensive Economic Partnership Agreement (CEPA) was signed and a vision statement adopted. Both leaders also participated in the I2U2 Summit held virtually on 14 July.

Modi also launched the redevelopment project of Lord Sri Krishna Shreenathji temple in Bahrain during his 2019 visit – the first ever prime ministerial visit by India.

Bahrain has become the second country in West Asia where BAPS Swaminarayan Sanstha will construct a traditional temple.

The 200-year-old monument is being renovated at a cost of $4.2 million.

Bob Thaker, president of the Thattai Hindu Merchants Community, said the three-storeyed structure is being built on 45,000 sq feet of land and will have 80 per cent more capacity to host devotees. A special facility will be there to accommodate priests, he said.

The temple will also have a facility to host Hindu weddings — in line with the Bahrain Tourism and Exhibition Authority’s initiative to make the kingdom a hub for Indian weddings.

“There will also be a knowledge centre and a museum attached to the temple,” Thacker told the newsofbahrain.

Bhagwan Asarpota, a prominent member of the Thattai Hindu Merchants Community, said at the time, “We are fortunate to have the Indian Prime Minister visit the temple amidst its 200th-year celebrations.”

As per Khaleej Times, Brahmavihari Swami in June thanked the leadership after receiving the grant of land formally from the Crown Prince. He also delivered a message from Indian Prime Minister Narendra Modi welcoming the historic moment.

“We are profoundly grateful to the Crown Prince and Prime Minister of Bahrain and to the Prime Minister of India for this historic gift of land, which represents the enriching of warm relations and an exchange of ideas between Bahrain and India which spans millennia. For BAPS, it is the culmination of a precious moment in 1997 when the late Emir Sheikh Isa bin Salman Al Khalifa received His Holiness Pramukh Swami Maharaj at the Royal Palace in Bahrain. In their conversation, Sheikh Isa lovingly and instantaneously told Pramukh Swami Maharaj: ‘Make Bahrain your home’.”

Modi has also made gift-giving a way to promote uniquely Indian art forms.

In July, during the QUAD leaders’ summit in Tokyo, the prime minister presented gifts to his counterparts including Sanjhi art and a box with hand-carved Rogan painting, Pattamadai silk mats, and Gond art.

He gifted a wooden hand-carved box with Rogan painting to his Japanese counterpart Fumio Kishida during his meeting with him. 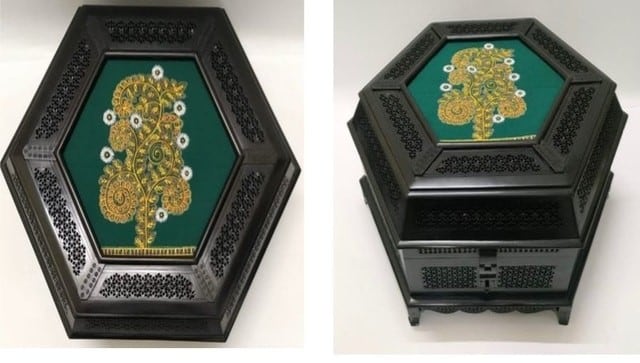 As per ANI, Rogan painting is an art of cloth printing practised in the Kutch District of Gujarat. In this craft, paint made from boiled oil and vegetable dyes is laid down on fabric using either a metal block (printing) or a stylus (painting). The craft nearly died out in the late 20th century, with Rogan painting being practised by only one family.

The word ‘Rogan’ comes from Persian, meaning varnish or oil. The process of making a Rogan painting is very laborious and skilful. Artists place a small amount of this paint paste into their palms.

At room temperature, the paint is carefully twisted into motifs and images using a metal rod that never comes in contact with the fabric. Next, the artisan folds his designs into a blank fabric, thereby printing its mirror image. In effect, it is a very basic form of printing. Previously the designs were simple and rustic in nature but with the passage of time, the craft has become more stylized and now is regarded as a high art form, ANI said.

This craft is a form of surface embellishment and practised for over a hundred years, but now by only a single family in Nirona, Kachchh. A special paste made of castor is used in this craft. Castor seeds are hand-pounded to extract the oil and turned into a paste by boiling, Coloured powder diluted in water is then mixed with this.

The pastes of different colours yellow, red, blue, green, black and orange are stored in earthen pots with water to prevent them from drying up. The kalam, an iron rod, flat at both ends, is used to paint half the design with the support of the fingers of the left hand. It is then impressed on the other half of the cloth by pressing the two halves together. As they were inexpensive substitutes for embroidered textiles, they were popular alternative textiles for clothing, ANI said.

Hand carving on wood is an intricate art inspired by traditional jali designs taken from famous monuments of India. The designs are created by the experts in the most synchronised manner. The skill of wood carving is an example of the excellent craftsmanship and rich tradition of India.

According to ANI, Sanjhi Painting is a tradition of art that originated out of the cult of Krishna and flourished in the north Indian state of Uttar Pradesh. It is in Vraja, or Vrindavan, the homeland of Lord Sri Krishna, that this art of Sanjhi painting reached its pinnacle.

Sanjhi is the art of hand-cutting designs on paper. Traditionally motifs from Lord Krishna’s stories are created in stencils. These stencils are cut freehand using a scissor or a blade. The delicate Sanjhi is often held together by thin sheets of paper. The prime minister gifted a Sanjhi Art panel to US president Joe Biden during his meeting with him in Tokyo. News18

This intricate Sanjhi Panel is famously based on the theme of Thakurani Ghat from Mathura by a National Awardee.

As per ANI, this art painting is rooted in the folk culture of the region. It was taken to its glory by the Vaishnava temples in the 15th and 16th centuries. Sanjhi came to be regarded as a highly refined art form practised by the Brahmin priests. Presently, the art of Sanjhi painting is practised by only a select few and remains a living tradition only in some of the temples of India. One of these temples where Sanjhi painting still survives is the Radharamana temple of Vrindavan.

As per ANI, the historical evolution of ‘Gond’, also known as Pardhan painting or ‘Jangarh kalam,’ comes from a community of around four million people spread all over central India, Gonds have a recorded history of 1400 years.

Gond paintings are one of the most admired tribal art forms. The word ‘Gond’ comes from the expression ‘Kond’ which means ‘green mountain’.

These paintings, created by dots and lines, have been a part of pictorial art on walls and floors of Gonds and it is done with the construction and re-construction of each and every house, with locally available natural colours and materials like charcoal, coloured soil, plant sap, leaves, cow dung, limestone powder, etc.

Gond art is considered very similar to Aboriginal art of Australia. The Aborigines have their own stories like the Gonds do about creation.

These two art forms are divided by thousands of miles of physical distance between their creators but are closely united and connected in their sentimentality and emotional core which are the definitive features of any art form.

Verstappen, who is chasing a record-extending 15th win in a single season, clocked a best lap in one minute and 25.146 seconds to outpace Russell