The latest web show on Disney Plus Hotstar that’s all set to stream from today is Dahan: Raakan Ka Rahasya, starring Saurabh Shukla, Tisca Chopra, Ankur Nayyar in pivotal roles. It’s directed by Vikrant Pawar and written by as many as three writers, Nisarg Mehta, Shiva Bajpai and Nikhil Nair. The show flirts with the idea of the supernatural and occult science and boasts off some spectacular scenery of Rajasthan.

In an exclusive interview with Firstpost, the director (Vikrant), the actor (Ankur) and the three writers (Nikhil, Nisarg, and Shiva), spoke about the germ of the idea, working with Saurabh Shukla, the rich cinematography that has given the show a scenic look, and the differences in creative process one faces during the making of a piece of work.

Nikhil, where did you get the germ of the idea from?

Nikhil Nair: The idea came from wanting to do something fun. To put someone in a very uncomfortable space like a fish out of water. We were very interested in the idea of a single mother, career-oriented and very powerful, who’s in a scary situation. We wanted to create a world that felt like our world but also a little different, so we created a whole mythology around this world and made an entire story on it. The more you care about your characters, the more you feel scared for them and then, you relate to them. 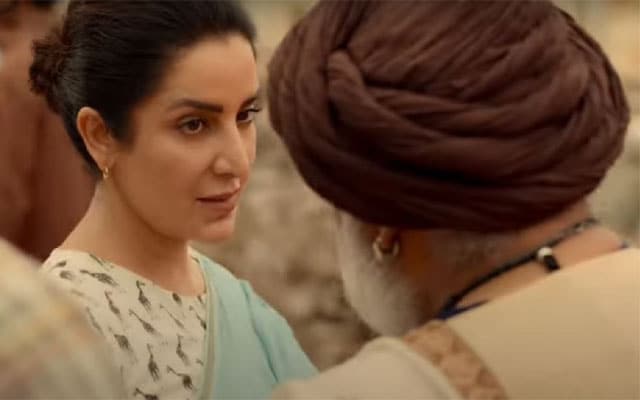 Tisca Chopra in a still from the show

Nisarg, this is your second film with Saurabh Shukla after Daas Dev. How was your experience of working with him again and how much do you feel he has evolved as an actor? Saurabh Shukla in a still from the show

(Laughs) Daas Dev was my first project. When I came to Bombay, I was an assistant director on that project and was only involved in the post production. I was work with Sudhir (Mishra) sir and Sudhir sir and Saurabh sir are like old time friends. That was the first time I met Saurabh Shukla in real life. I don’t think we need to answer how he has evolved as an actor, he has come into his own in the last few years. As far as my writing is concerned, it’s been an education, a learning experience. I’ve learned from Shiva and Nikhil a lot. This was a grand show we were writing and it was no holds barred.

Ankur, people are saying that OTT is giving a tough competition to movies. Is the medium giving better opportunities to many actors than films?

Yes, definitely. The more the medium, the better, for all of us, actors, writers, technicians. We had theaters, then cinemas, and now OTT, so there’s an addition of one more thing. With OTT, you have a much bigger audience since your content is consumed by the entire world. Sitting at home, I could watch any Israeli series or a Jewish show or anything. Now the audiences have become more literate and aware, and they don’t want to compromise on the qualify. They want to the best. The quality booms when the audiences have options. Insecurity is very important for us to grow, for creativity to happen.

Nikhil, Shiva, Vikrant, how important creative differences or arguments are when so many people are working on one show or any project?

Shiva: It’s very important to have conversations. We are always encouraging each other, trying to get the most out of each other. This is the part of filmmaking that’s not seen a lot. What I like about this show is that it has come out of very nice creative process. It’s not just from one vision but the vision of any people that wanted to see something exciting and fun.

Nikhil: We all are very passionate fans of horror, we all come from different backgrounds. There are a lot of conflicts but it’s all for the process of fun. We wanted to make a show that’s as terrifying as possible because we haven’t something scary in a very long time. A writer’s room is full of fun. The idea of being in a room with two very passionate people brings your energy up.

Vikrant: I take these arguments very well (smiles). For me, it was a part of responsibility. If I’m coming as an outsider and coming to see what they’ve done, I better add something to it. We didn’t have too many arguments, on most of the days, I just used to nudge them and push them in the direction of ‘Hey guys, what about this aspect.’ It’s a give and take and they kept surprising me.

What are the challenges of writing thrillers when social media can ruin the suspense right on day one? Nisarg: It’s a privileged position to be in if people give out spoilers for our show. This means a lot of people are watching the show and care for it. It’s a big tick that whatever work you’ve done, people are accepting it and they think it’s worth telling others.

Shiva: But to add, I don’t think people should give out spoilers and spoil it for others.

Nikhil: I have a friend who actually likes to read about every show before he watches it. I feel you really have to accept how people like to watch certain things. The show has some thrills but it’s also about the story and journey of the characters. You can read the end of a murder mystery book and yet enjoy the journey of the detective.

Nisarg: It’s also a visual experience right. There have Ben great adaptations of books and the audio visual medium had a fan following of its own.

Vikrant, apart from the stunning cinematography, Rajasthan has never looked this stunning, what can be the takeaway for the viewers from the show?

Thank you for the compliment. I had a great time filming in Rajasthan. The takeaway for people is going to be the conflict the main character is going through, how she gets to that place where her inner demons and outer demons get resolved. It’s an all-and-all entertainer with all kinds of subplots.