Meri Pyaari Bindu: When all a woman's good for, is helping a man 'find himself'

Two struggling artists, alike in dignity, in fair Mumbai is where we lay our scene.

Abhimanyu (Ayushmann Khurrana) sits at a typewriter (really) in his room drinking whiskey and smoking cigarettes, as he tries to write. His walls have framed prints of his books’ covers. All his books are successful, especially a horror novel that I certainly wanted to read, called Chudail ki Choli. Every time Abhimanyu finishes typing out a page, he crumples it and throws it on the floor. It’s been three years since his last book, and he is trying to write a love story.

Bindu (Parineeti Chopra) wants to be a singer. First, we see her as the girl who sings in school, and as the woman who cries when she sings her mother’s favourite song (her mother dies in a car accident), before she disappears to Australia and joins a band. Then she moves to Mumbai, falls in love with Abhimanyu (the one who has loved her from when they were children), and makes her first CD. We are not surprised when nobody buys it — how else will we see Abhimanyu’s never-ending love and her ‘selfishness’ — and Bindu disappears to Bengaluru.

When Meri Pyaari Bindu ends, only one of them is still an artist. You obviously know who it is. In retrospect, I’m not sure why I felt cheated by the movie’s ending. After all, there have been enough films about tortured male artists and how the Manic Pixie Dream Girl women they love help find themselves and make art again.

For instance, it’s Shraddha Kapoor’s incredibly innocent and ‘pure’ character in Rock On 2 that helps Farhan Akhtar make music again, and in Aashiqui 2 she wants to give up her music career for love. Ranbir Kapoor’s music in Ae Dil Hai Mushkil comes from heartbreak because Anushka Sharma doesn’t love him the way he wants her to, and she eventually gets cancer. Rockstar has Ranbir Kapoor (again) experiencing heartbreak when Nargis Fakhri dies, and then channeling this to become a successful singer. Like Akhtar and Ranbir Kapoor’s characters, Abhimanyu is the intense-boy type, but also the good-boy type, and seems to believe inherently that to make “true art” he needs to write about love.

Akshay Roy’s Meri Pyaari Bindu works by flashbacks that add to the nostalgia of its old Bollywood songs. Abhimanyu, is trying to write “meaningful literature” (ignoring our screams at the screen that Chudail ki Choli is deeply meaningful). He can only do this by remembering his own lost love; after all, Bindu is as much the cause of his writer’s block, as she is his guiding light out of it. It’s not a coincidence that Bindu’s opening line when she first meets Abhimanyu (his mother has sent him to her house with a plate of samosas) is to give him her headphones, smile angelically, and say, “This will change your life.” It’s hard to believe the ‘this’ that Bindu referred to was just the song, and not her.

Bindu is the typical Manic Pixie Dream Girl — larger than life, the kind of person who doesn’t realise the whole world is in love with her. She talks incessantly, helps an entire college hall cheat in an exam in exchange for money and sunglasses, and, as Abhimanyu tells us with utmost seriousness, she “loves life.” Essentially, Bindu is Geet from Jab We Met, Happy from Happy Bhag Jayegi, and Nimmi from Running Shaadi.

There’s a scene in the movie where Bindu is depressed that her first CD doesn’t do well — just before this we see her standing in front of a store that’s selling her CDs watching how nobody is buying her music. Here, Abhimanyu (before he becomes a writer), asks her where she sees herself in five years. He says he sees himself with her in a two-bedroom flat in Matunga with a dog and two children, even though he hates working as a banker. It’s obvious she doesn’t — Bindu says she has only seen herself as a musician on tour, and without that, she was lost. So she calls herself ‘selfish’ for not wanting what he wants, and moves to Bangalore. This is the heartbreak that stops Abhimanyu from being able to write a love story.

When we see Bindu again she has a daughter with a man she met in Bengaluru (the nicest thing about her love story with Abhimanyu is that they don’t end up together). She has given up on music. She says she loves being a mother more than anything else in the world. “I’ve never completed anything I start,” she says, but apparently being a mother completes her.

By now, I can’t shake off the feeling that everyone making these tormented male writer/artist movies believes that women are only there to help men find themselves. Without women, all these artist-type men would still be lost. It makes us remember Leena Yadav’s thriller Shabd quite fondly — where struggling writer Shaukat (Sanjay Dutt) decides to imagine a love story between his wife Antara (Aishwarya Rai) and her colleague. But whatever he writes ends up coming true, and finally the movie ends with Shaukat going crazy.

We never find out what happened to Bindu’s ardent desires. If we had seen her fail, seen her put away her dreams, would it have been better than just this baby as Band-Aid denouement? Perhaps. But for that it would have meant that fictional Abhimanyu and the real-life men who make these movies should believe that a woman’s existence has to be more than Chulbuli Who Made Me Realise I was Dead Inside/Pale Hands I Loved Before She Died. 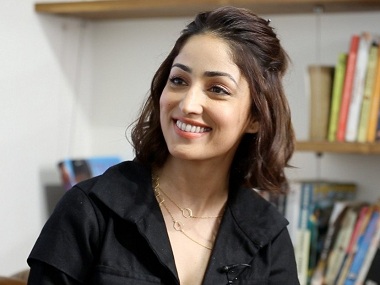