As fans gear up to welcome the return of popular reality show Bigg Boss, the makers are leaving no stones to unturned to keep the buzz around the show alive. The show premieres on 29 September for its thirteenth instalment, with Salman Khan returning as host.

In a fresh promo shared by Colors, Salman is attending phone calls from close friends and family, asking about the show. Choreographer-filmmaker Farah Khan makes the first call to ask about the theme for this season; Salman’s brothers Sohail and Arbaaz then call him to ask why the show will speed up to the finale in 4 weeks and yet continue running for 15 weeks. Filmmaker Karan Johar also calls up, to enquire on behalf of his mother, who is a big fan of Salman and the show.

While the pictures of the new mansion designed for the show has already been released, it was also reported that the Bigg Boss Museum in the house has gone plastic free. The 18500 sq ft luxurious home, adorned with several aesthetic elements, and 93 cameras for the contestants’ stay during the next 100 plus days, has been designed by Bollywood art director Omung Kumar.  Take a tour of the house here

Meanwhile, as the countdown starts for the premiere episode, here's everything you need to know about this season.

Where can you watch the new season?

When will Bigg Boss 13 air?

The thirteenth season is set to premiere from 29 September and will air from 9 pm onwards, while the daily episodic run is slated to air at 10:30 pm on Colors TV, the Weekend Ka Vaar episodes will take place at 9 pm on every weekend.

How to watch Bigg Boss 13 online or stream live?

According to News18, Bigg Boss Season 13 can be viewed only on Voot app after the episode is finished on television. However, in addition to that, one can also watch unedited episodes on Voot.

Who are the contestants of these season?

TV actor Devoleena Bhattacharjee, best known for her turn as Gopi Bahu in hit series Saath Nibhaana Saathiya, and Siddharth Shukla, who played a pivotal role in Balika Vadhu, are the two contestants who have been confirmed for the reality show.

According to Hindustan Times, the other celebrities who may join the show this season are Dalljiet Kaur, Koena Mitra, Rashami Desai, Arti Singh and Shivin Narang. A Pinkvilla report added that Dayanand Shetty and Rajpal Yadav will also be participating this season. However, this is only a tentative list of contestants who will most likely enter the Bigg Boss house, the actual revelations will happen during the premiere episode. 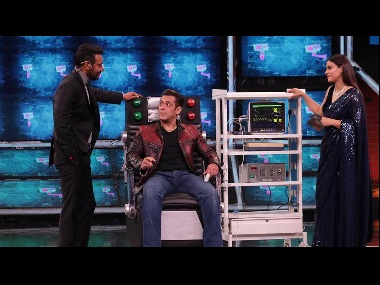