Bigg Boss 10: Swami Om is second contestant after Priyanka Jagga to be booted for bad behaviour

Just a couple of weeks ago, Colors TV's controversial TV show Bigg Boss recorded a 'first' in its 10-season run: Host Salman Khan personally evicted a contestant (Priyanka Jagga) from the series for being badly behaved. 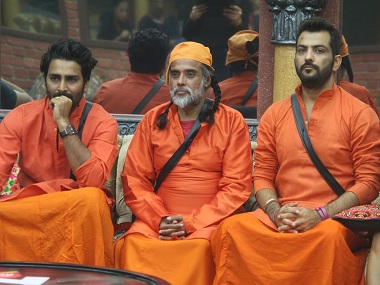 That's quite something considering that most contestants on Bigg Boss would never be considered examples of good behaviour to begin with.

The 'rogue's gallery' has featured people like Dolly Bindra, Kamaal R Khan and Sambhavana Seth in the past, and the show's format seems to bring out the worst in those featured on it. Case in point: Season 9 had contestants spitting into each other's drinks, throwing food (at each other); and one contestant even used another's toothbrush on the sly to clean the toilet. Every season has TV critics proclaiming that it's the absolute worst so far, and that it has sunk to new lows.

So when among all these instances of despicable behaviour, a contestant or two is singled out as being the absolute worst in Bigg Boss history, you know they've got to be pretty darn bad.

Bigg Boss 10 has not one contestant but two vying for the 'worst' title. Priyanka Jagga, by 'virtue' of being eliminated in the first week, and then being brought back for a relatively short time before she was shown the door again, had a smaller window of opportunity to show viewers just how bad she could be. But even in that span of time, she managed to get another contestant (Bani J) to wash clothes she had urinated in (yes, this happened). The rest of it — screaming, abusing fellow contestants, using abominably crass language — all pales in comparison.

What was surprising however, was that Priyanka was booted off the show before her comrade-in-arms (and misdemeanours) Swami Om.

That the only thing Swami Om was known for — slapping a female co-panelist on a show on national television — was what made him eligible to participate in Bigg Boss should have given fair indication of what his behaviour would be like. And he didn't 'disappoint'.

From disrupting tasks, wishing other contestants' parents dead, stealing food, breaking furniture, to even urinating outside a 'task area' so that other contestants couldn't access it, Om has done it all. At one time, when he threatened Rohan Mehra with physical harm, Om was warned by 'Bigg Boss' that he would be ousted from the show if he ever repeated the act.

But in the episodes since, his behaviour has spiraled downward, and there's been no reprimand in sight — apart from the ineffectual sort.

Reports doing the rounds now suggest that Om has been made to leave the show (he was in any case nominated for possible eviction this week). His antics during the captaincy task (in the episode aired on the night of Wednesday, 4 January; Om is accused of 'flinging pee' at other contestants) could possibly be the straw that breaks the camel's back.

The question of course, is why he was allowed to continue on the show for so long.

While contestants who create a 'scene' are generally kept on as they help garner TRPs, Om's behaviour had long since passed the point of being merely eccentric or loud to being disgusting.

If he has indeed been made to leave Bigg Boss — as sources confirm will be shown in the episode aired on Thursday night (5 January) — no one's going to mourn the loss.