Poor Ayushmann Khurrana. It’s hard work being the only woke actor being around, the one who can do no wrong.

The poor guy is being mocked because in his eagerness to promote Shubh Mangal Zyada Savdhaan, what’s being dubbed Bollywood’s first gay romcom-that-does-not-stereotype-and-laugh-AT-gays, he’s not only posed with the tricolor and rainbow flag, he’s also congratulated India for legalising same-sex marriage. He told a reporter “We are really proud that we are supporting the community. Our country is very progressive that it legalized same-sex marriages.”

Of course, India has done no such thing yet. Khurrana was getting a little ahead of himself.

But we cannot blame the poor overworked actor-with-a-cause. How many put-upon minorities can you represent without tripping up occasionally? He’s the guy-next-door who has taken up the cause for all our beleaguered little people.

Sperm donors. Men with premature balding issues. Men with erectile dysfunction. Blind pianists. Men who impersonate women’s voices. And now homosexuals. No wonder Khurrana says he is taking a break from films for a few months, a break from being Ayushmaann Khurrana and his roles-with-a-message. Or as the media always calls it “quirky” roles. I guess it’s a mark of some progress if homosexuality progresses from being a “sickness” to a quirk.

To give Khurrana credit he puts his mouth where his heart is. In Shubh Mangal Zyada Saavdhaan, the upcoming gay rom-com he goes all out with a full-on man-on-man kiss that has made the trailer go viral. Whether that’s an act of courage and principle or a shrewd marketing gamble that paid off is anyone’s guess but liberal heterosexuals are congratulating their gay friends as if Section 377 just got decriminalised all over again.

Khurrana was recently at the Tata Steel Kolkata Literary Meet promoting Shubh Mangal Zyada Saavdhaan in front of a packed house of adoring fans, a large percentage of them female. He made all the right noises about how he had jumped at the script, how he’d been looking for just such a role, the importance of using comedy to reach people and trigger conversations. He talked about how the film avoided stereotypes and cliches of what gay people are supposed to be like. He admitted disarmingly how as a boy growing up in Chandigarh, he was not always this woke. He might even have been been “borderline homophobic”. But now he’s evolved and he hopes the country has as well.

The trailer played. The audience whooped. Some actors might be nervous about what taking on a gay role (complete with a kissing scene) might do to their masculinity. But Khurrana shouldn’t worry. This has just added to his Ayushmann Khurrana-ness.

Here’s a sample of the audience interaction.

Young woman (waves furiously for the mic and gets it) - Hi Ayushmann.

It ends with her saying “Love you”. He says “Love you too.” And everything becomes a love puddle.

It’s wonderful that Bollywood has decided to go for a gay rom-com instead of the gay side character. The gay plot is not a sub-plot, It’s the main story here. It’s high time that someone made a feel-good gay film crackling with one-liners that has as much place out there as a My Brother Nikhil or Aligarh. The trailer suggests Shubh Mangal.. has all the masala of a standard Bollywood rom com - young couple in love, parents who are dead against it, someone being married off against one’s choice, Sholay’s Veeru style public declaration of love, even the lover running after a moving train sequence. It’s just all wrapped in a rainbow flag. That is what makes it off-beat. But if a comedy allows it to sneak into places where other more “serious” films cannot, more power to it.

That does not mean we must all be grateful to Shubh Mangal Zyada Saavdhaan for just existing. When a comedy tries to represent a community that has mostly been the laughing stock in films until now, it will have to be ready to also take responsibility for the images it puts out there. Filmmaker Hitesh Kewalya has said he’d shown the script to some members of the LGBTQ community and asked for their honest feedback. Hopefully he got it as well.

Ayushmann Khurrana in a still from the trailer of Shubh Mangal Zyada Savdhaan.

The problem for bechara Ayushmann Khurrana is that he has become the face of everything off-beat now. That’s a lot of burden for one actor to bear. An Amitabh Bachchan can write an open letter to his granddaughters and say “Don’t let anyone make you believe that the length of your skirt is a measure of your character” but that’s just before one Pink releases. Ayushmann Khurrana does not represent one pink. He is basically the standard bearer for a veritable rainbow.

And if in his haste to do good, he trips up and thinks we have same-sex marriage already in India, we can give him a break. What it really highlights inadvertently is that many people were so relieved with decriminalisation, they assumed the gay rights movement in India was done and dusted. In fact 377 was just a first step. Forget marriage. There is still no protection against homophobia and discrimination. A gay person cannot put her partner’s name on a life insurance beneficiary. A gay couple will be turned away from a “couple’s night” at a swanky bar. While corporate India has taken steps to extend benefits to gay employees, hardly any politician has come forward even after the verdict.

And too often our acceptance does not go beyond cute rainbow memes.

Diversity advocate Ritesh Rajani once did audits of companies who had put out rainbow themed equality ads. When he called one such insurance company and asked if they offered insurance benefits to same-sex partners, the answer was no. Post-377, gay is just the new cool. Hopefully Shubh Mangal Zyada Saavdhan will prove to be more than just a film climbing on the new cool bandwagon. Just having Ayushmann Khurrana whom a tabloid recently described as “the man who can currently do no wrong” as the lead will not be insurance enough otherwise.

Khurrana has tweeted since then that his gaffe was a “genuine slip” though he really wishes same-sex marriages become legal in India. From his mouth to the court’s ears. As it happens a gay couple from Kerala who got married in a secret temple ceremony has just gone to court challenging the Special Marriage Act and demanding they get a proper marriage certificate. Perhaps Ayushmann Khurrana could file an amicus curiae brief there. 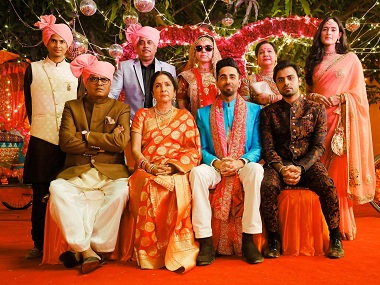