Mumbai - As stocks and the rupee crashed, Reserve Bank Governor Raghuram Rajan today allayed fears citing strong macroeconomic fundamentals of the country which are much better than many others.

"I wish to reassure the markets that our macroeconomic factors are under control as the economy is in a much better position relative many other economies," Rajan told the national banking summit organised by the IBA and Ficci here.

Rajan said the country has $380 billion in forex reserves to be used as and when the need arises.

The Governor also hinted at lower rates, saying the RBI will look at emerging room for more accommodation on the back of lower commodity prices, astute food management by the government and strong anti-inflation policy stance of the central bank.

He also said he sees oil prices remaining at low levels at for a year or two.

Amid free fall in stock markets, the rupee today crashed to 66.49 against the dollar, plunging a whopping 66 paise. The rupee has not seen such a low level in almost two years in opening trade on sustained capital outflows even as the US currency weakened overseas.

The RBI Governor said that turmoil in currency market has been long-coming and China is only the last step in it. 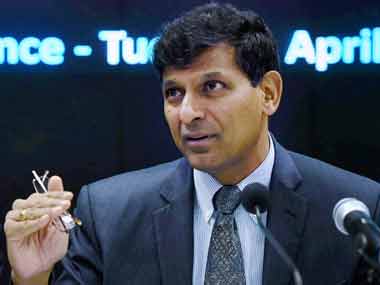 Rajan, however, said the rupee has strengthened against the yen and euro, and the RBI has resources to deal with rupee volatility.

In its biggest intra-day crash this year, the market benchmark Sensex plunged by 1,006 points while Nifty fell below 8,000 level in early trade today due to heavy selling by funds amid global sell-off as worries about China's economy deepen.

Asian markets were also in deep red with Shanghai shares crashing 8 per cent on concerns that the Chinese economy was slowing more than previously thought. Taking cues from global markets, the Sensex nosedived 1,006.54 points, or 3.67 per cent, to 26,359.53-- the biggest fall in day trade in 2015.

Brokers said sentiments suffered a jolt following a sell-off in other Asian markets with over 8 per cent plunge in Shanghai index.

Meanwhile, crude prices fell after slipping below $40 barrel for the first time in six years after weak Chinese manufacturing data.