Pakistan Election Results 2018 updates: PTI in talks with MQM-P to make up numbers in National Assembly Pakistan Election Results 2018 latest updates: A European Union monitoring team said that the campaign for Pakistan’s general election this week featured a “lack of equality” that meant it was not a level playing field for all parties.

Losing Lyari seat was perhaps one of the most humiliating defeats for the PPP. Bilawal Bhutto, whose family has a long association with the Lyari seat and even regarded it as a second home, only manage to get to third place in the electoral race. Besides, Bilawal managed to win from the PPP's fort of Larkana but lost to the PTI in Malakand.

According to the official election commission data, the voter turnout for the National Assembly polls was 51.85 percent as compared to the 53 percent recorded in 2013 elections. In provincial polls, Balochistan saw the lowest turnout at 44.79 percent while Punjab had the highest turnout at 55.09 percent.

PTI has denied rumours that it was in touch with Bilawal Bhutto-led PPP to get the required numbers to form a government at the Centre. The party tweeted out PTI leader Fawad Chaudhary's rebuttal to such rumours.

The ECP has corrected the results of NA-190 (DG Khan II), declaring Independent candidate Muhammad Amjad Farooq Khan Khosa as the winner, reported Dawn. Previously, PTI candidate Sardar Zulfiqar Ali Khan Khosa was declared as the winner with a thin margin. As per the new Form 47, the "clerical error" occurred due to entering the wrong number of votes in the Results Management System.

According to local Pakistan media, the Election Commission of Pakistan (ECP) has released provisional results of 251 out of 270 National Assembly (NA) seats which were polled on 25 July. According to the results, the Pakistan Tehreek-e-Insaf (PTI) is leading the NA tally with 110 NA seats. Trailing is the Pakistan Muslim League-Nawaz (PML-N) with 63 and Pakistan Peoples Party (PPP) with 42 seats.

There are a total of 12 independents in the NA so far as well.

PML-N leader and Shehbaz Sharif's son, Hamza said that the party will form government in Punjab province despite allegations of poll rigging. In a press conference on Friday, he said, "The democratic process should continue. The answer to a weak democracy is another democracy."

PTI chairman Imran Khan has reportedly tasked his confidant Jahangir Tareen with recruiting Independent Members of the Provincial Assembly in Punjab. The decision was made after an advisory meeting in Islamabad.

The Pakistan Peoples Party's (PPP) workers staged a protest in Karachi on Thursday night after their chairman, Bilawal Bhutto Zardari, was defeated in NA-246 (Karachi South I), a PPP stronghold, as per unofficial results, reported Geo TV.

According to Dawn, PML-N's Khwaja Saad Rafique has challenged Imran Khan's NA-131 (Lahore) win in a petition submitted to Returning Officer Muhammad Akhtar Bhango. The former minister has alleged that the presiding officer deliberately rejected several votes in the constituency.

The Election Commission of Pakistan has released results for 95 percent of seats — ie: 251 out of 272 seats — and the PTI is leading in 110 of them. Even if it manages to win all 19 of the seats where counting is currently in progress, it may not be able to form government on its own.

As per the latest update from Election Commission of Pakistan on Friday, around 94.89 percent results of National and Provincial assemblies have been declared. PTI has won 110 seats in the National Assembly; PML-N 63 seats and PPP 42 seats.

Pakistan's election commission has said that the official results can be expected to come out in the next three to four hours. The poll panel rejected all claims of rigging but acknowledged that it received over 670 complaints during the polling process.

Poll panel has said that the turn out for these polls was impressive, even though it said that the exact numbers will be revealed tomorrow. The poll panel's statement comes at a time when all major political parties (except winning PTI) had claimed that voters were prevented from casting vote due to slow polling process, and panel's failure to extend the deadline. Nawaz Sharif has rejected the election results and said that the mandate was snatched from his party, Geo News reported. The former Pakistan prime minister made the remarks during a meeting with party leaders at Adiala jail in Rawalpindi.

Nawaz further said that he firmly adheres to his 'respect for vote' stance, adding that he is standing for the restoration of civil supremacy.

Imran Khan said that he is ready for an investigation into the rigging allegations being levelled by major political parties in Pakistan. "I will ensure that all and every concern of the Opposition is addressed. We will acknowledge all concerns, unlike previous governments. These are the cleanest, most transparent elections in the history of Pakistan," Khan said.

Imran Khan said that he has seen that the ties between India and Pakistan have not progressed because the two countries have always indulged in blame game which further stagnated the bilateral relations. "If India takes a step towards us, we are ready to reciprocate by walking two steps. But the step should at least come from them. Right now it is one sided where India is constantly just blaming us. ," Khan added.

Prime minister-elect Imran Khan said that the new Pakistan under the leadership of PTI will focus on policy, governance, transparency and foreign policies. Imran slammed the Indian media when he started speaking about its eastern neighbour and said that the media portrayed him as a "Bollywood villain" when the two nations should focus on furthering better ties with each other. Imran said the blame-game between India and Pakistan must stop. "Kashmiris have suffered significantly. India and Pakistan must take steps to improve trade relations and the situation in Kashmir."

Imran mentioned China and said that there are lessons to be learnt from Beijing too. "We will strengthen and improve our relations with China. We want to work towards success of CPEC. We also want to send teams to learn poverty alleviation from China. How to lift our most poor who can’t even eat two meals a day." Lauding China's zero tolerance policy for corruption, Imran said, "The second thing we can learn from China is how they curbed corruption and set the example that corruption does not pay."

"We will not let political victimisation of anyone happen. No one will be above the law; this is our aim. And for these checks and balances, we need strong institutions. I don’t think any leader has seen as many personal attacks as I have seen in the past 3 years. I have forgotten it all and it’s behind me. This is bigger than Imran Khan. This is about the country. We want to set an example that the law will be supreme. The west is ahead of us purely because of these principles and this must become our guiding principle."

Khan said that in the past decade, he saw the rise and fall of Pakistan. He condemned the violence in elections, especially in Balochistan as he praised the people for coming out in large numbers to vote despite the intimidation. "I came into politics 22 years ago because I believe that the potential of our country was not being realised. The Pakistan that I saw growing up deteriorated in front of my very eyes."

Trends show that chiefs of six mainstream political parties, including PPP's Bilawal Bhutto and MMA president Maulana Fazlur Rehman, are set to lose elections in the PTI stronghold, Khyber-Pakhtunkhwa province. This was the first time in history of Pakistan that KPK is poised to re-elected a party in the provincial Assembly.

PTI chief Imran Khan is the first ever Pakistani politician to have contested five seats and win all of them. Prior to Khan, only Zulfiqar Ali Bhutto contested from four constituencies at the same time, of which he won three and lost out on one seat to Mufti Mehmood.

Quoting party sources, Dawn reported that Hamza Shehbaz Sharif and Saad Rafique have been tasked with recruitment of Independent winners to ensure PML-N is able to form government in Punjab.

According to latest unofficial election trends, ARY News reported that PTI is currently leading in 115 seats, a drop from the earlier 120. PML-N, on the other hand, is now ahead in 64 seats, and PPP in 38 seats.

According to The Guardian, Pakistan will have to wait until Thursday evening for official results to be announced, ECP officials have said. It is 24 hours after polls closed on Wednesday evening. Meanwhile, the Pakistan stock market showed a bullish trend, a day after the country voted for the second consecutive democratic government, as early unofficial election results tipped PTI to win most seats.

Following technical glitches in the Result Transmission System which led to delay in announcement of results, an ECP source said that system has not yet recovered, and it will take about three to four hours more to get all the results.

Imran Khan's spokesperson Naeemul Haque said that the PTI chief will “address” Pakistan on Thursday at 2 pm PST, reported Dawn, “in celebration and recognition of the massive support received from the people of Pakistan in the 2018 elections which was a contest between the forces of good and evil”.

Amid allegations of wrongdoing and rigging in the Pakistan elections, PML-N chief Shehbaz Sharif said the party rejected the election results. "We will use all political and legal options for redressal of these glaring excesses. This is an outright rigging and the results based on massive rigging will cause irreparable damage to the country," he said in a tweet.

As per unofficial trends, according to Dawn, Imran Khan's PTI is leading in 112 seats in Pakistan, while PML-N is second with 65 seats. Bilawal Bhutto's PPP is trailing at third place with 43 seats.

The Election Commission of Pakistan (ECP) on Wednesday rejected allegations of any wrongdoing in the general election after several political parties raised objections over the process and said they feared rigging.

The ECP said the election results were being collected and the first official result will be announced soon. 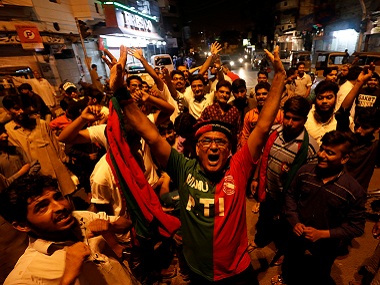 He rejected any wrongdoing in the election and said "the issue of fraud can be discussed after ECP announces the results". The Imran Khan-led Pakistan Tehreek-e-Insaf (PTI) has claimed victory despite serious questions being raised over the authenticity of the election process.

Hundreds of PTI supporters came out on streets in several cities, dancing and celebrating. "We have got our Naya Pakistan," said Shahid Ali, one of the supporters, as he danced euphorically near the busy Faizabad interchange, which links Islamabad with the garrison city of Rawalpindi.

The Press Trust of India correspondent was caught for several hours in traffic when returning from the election coverage as highly-charged PTI workers raised victory slogans.

Reports said similar celebrations were being organised in other cities as well. The victory and joy in the PTI camp appeared premature as the incumbent PML-N and Bilawal Bhutto's Pakistan Peoples Party (PPP) rejected the results. "Our polling agents were not given results and we will not accept it," said Khurshid Shah of PPP.

PML-N president Shehbaz Sharif alleged that the election process was "blatantly" rigged. He warned of protests. Analysts predicted tumultuous weeks ahead for Pakistan as a strong opposition to the election results was building up.

PML-N was leading on 67 seats and PPP on 39. "They will make a lethal combination if they joined hands against Imran Khan," analyst Sohail Warriach said.