World Malaria Day 2019: Despite unprecendented success, half the world's population still at risk

As of 2017, India accounted for only 4 percent of all the malaria cases reported worldwide.

World Malaria Day is observed globally on 25 April to recognize and celebrate worldwide efforts to control and raise awareness about malaria. This year, the annual event has activities and a campaign around the theme "Zero Malaria Starts with Me”.

After a decade of big advances in fighting malaria, the progress made to bring down new cases has plateaued since 2015. Every year, World Malaria Day marks an opportunity for local and global public health organisations to engage with civil society, private sector, academic institutions, and global leaders in ramping up and fighting to eradicate the life-threatening disease entirely.

We've seen a lot of progress over recent years towards eradication malaria. The most ambitious of these is the "gene drive" — a method of introducing a modified gene variant into a swarm of gene-edited mosquitoes that eventually makes subsequent generations of mosquitos with gene-edited parents, sterile. In regions where cases of malaria are very high, the mosquitos, specifically the female Anopheles mosquitoes responsible for carrying malaria-causing parasites from infected to healthy people, reproduce rapidly. The gene drive is a clever use of gene-editing technology to make these noxious malaria-causing mosquitoes sterile. Over many years, the gene drive could lead to mosquitoes being eradicated entirely (which sounds undeniably pleasant) but could cause irreversible changes to the natural ecosystem.

Other advances have come in the form of a new malaria vaccine that WHO has rolled out in Africa, an origami-style diagnostic device for remote regions without access to professional diagnosticians, mega-scale drug discovery efforts to treat the infection and research into vulnerabilities in the malaria-causing parasite that could make it an easier target for the body's immune system to fight it.

Malaria puts the health of more than half the global population at risk and kills one child every two minutes. As per the World Malaria Report-2018, an estimated 219 million cases of malaria were reported worldwide and no significant progress was observed globally in reducing the malaria cases despite the active efforts. However, for the year 2017 India accounted for only 4 percent of all the malaria cases reported worldwide and recorded 3 million fewer cases as compared to the year 2016. 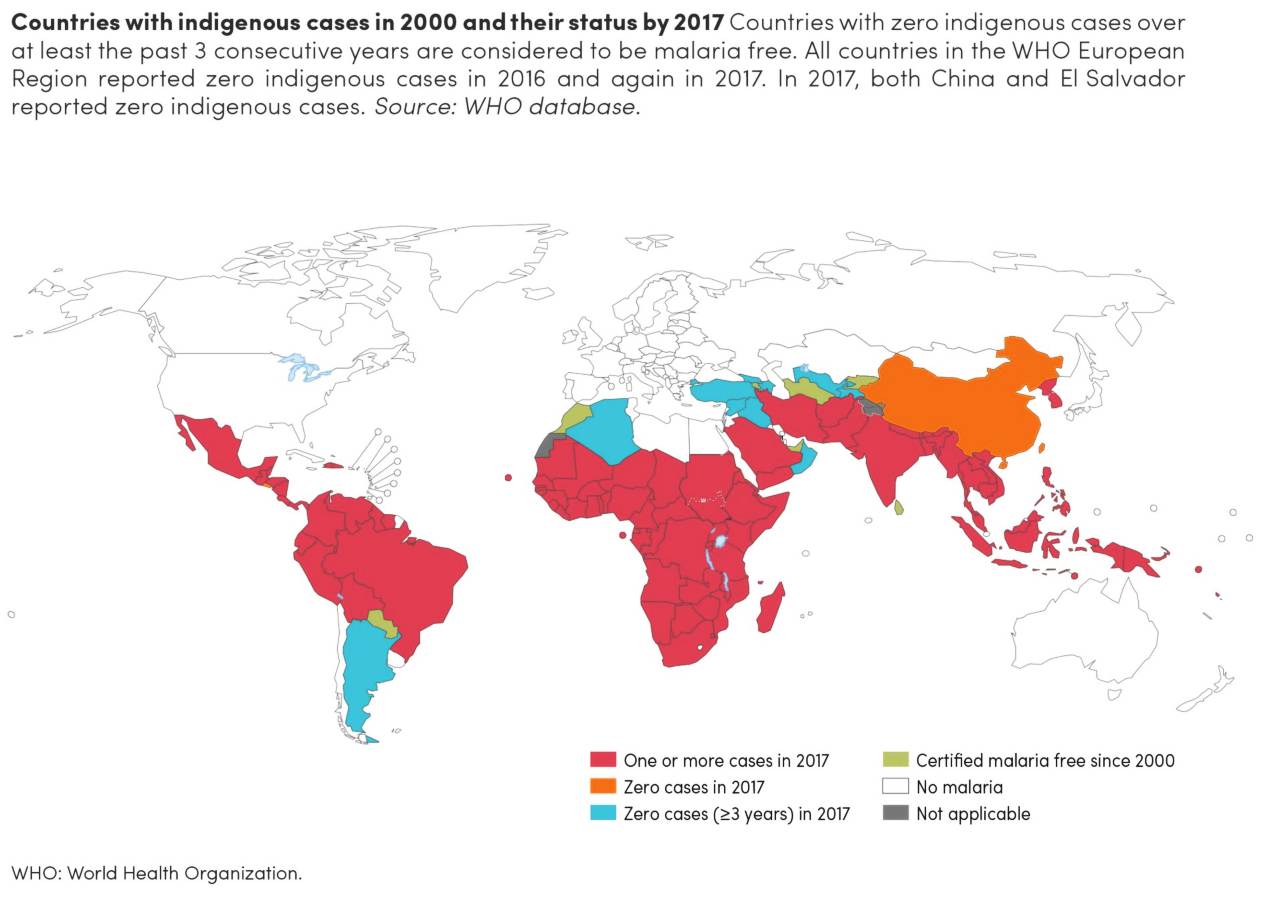 Malaria mortality from around the world as of 2017. Image credit: WHO

How is Malaria caused?

Malaria is a life-threatening vector-borne disease caused by parasites of the genus Plasmodium.

The parasites spread via the bite of a female Anopheles mosquito that has been already infected with the malarial parasite. The initial symptoms of the infection generally include fever, headache, and chills. Children suffering from this condition may also develop a few other symptoms such as severe anemia, respiratory distress, and cerebral malaria. If the condition is not treated on time, it gets worse. An untreated condition is known to eventually lead to organ failure and even death in some cases.

Malaria can be prevented by adhering to simple measures. Vector control, which means that people must take all the necessary precautions to prevent a mosquito bite, is the most commonly advised preventive measure for malaria. These measures can be attributed to wearing full sleeved clothes, using mosquito repellants, mosquito nets etc. Pregnant women and children are recommended to administer antimalarial drugs that help in reducing the risk of occurrence of a malarial infection.

Diagnosis and Treatment for Malaria

A timely diagnosis of malaria is critical for the condition to improve and prevent it from progressing to a life-threatening infection. Malaria is diagnosed with a simple microscopic or diagnostic test with a blood sample from the patient.

After the diagnosis, based on the parasite that has infected the person, a personalized treatment plan is advised by the doctor. For instance, patients suffering from an uncomplicated infection from Plasmodium falciparum are initially treated with ACTs (artemisinin-based combination therapy). A single dose of primaquine may also be added to the antimalarial treatment for reducing the transmission of the infection.

The infections caused by Plasmodium vivax may usually be treated with ACTs and chloroquine. In case of a severe infection, artesunate may be injected through intravenous or intramuscular mode.

Despite all the technical and scientific advancements, no vaccination to cure Malaria has been discovered yet. The war against Malaria is half won if we all come together to make collective efforts to eradicate the disease from its root. The disease can be completely eliminated with only a few active efforts just like polio and smallpox.

This World Malaria Day, let's all pledge that we do everything in our might, at the level of individuals, to stop the disease from spreading.

UP cops nab 4 for beef smuggling on Delhi border, mull action under NSA