The flash could be a rare, more extreme case of matter falling into a black hole or neutron star.

While imaging the NGC 6946 a.k.a. 'Fireworks' galaxy 22.5 million light-years away, the NASA-operated NuSTAR X-ray observatory picked up on something unusual. A series of unfamiliar flashes of X-ray light (shown in green and blue spots in the image). Part of what makes this sighting unusual is that the blobs disappeared over days — heartbeats in the cosmic timeframe.

Apart from the sighting itself, the study published in the Astrophysical Journal also offers some explanations for the appearance of a green blob near the galaxy's centre, which appeared and disappeared in a matter of weeks. An image of the 'ULX-4' event captured by the NuSTAR X-Ray Observatory in the Fireworks galaxy, 22 million light-years away. Image: NASA

The NuSTAR observatory concerns itself with supernovas, which are massive star explosions. The green blob at the bottom of the galaxy in the image wasn't seen in the first observation of the galaxy. It showed up during a second observation, made ten days after the first. A second X-ray telescope, NASA's Chandra X-ray Observatory, was pointed at the Fireworks' galaxy to get another look, only to find that the object ULX-4 had disappeared.

"Ten days is a really short amount of time for such a bright object to appear," Hannah Earnshaw, a Caltech researcher and lead author on the study, said in a statement.

"Usually with NuSTAR, we observe more gradual changes over time, and we don't often observe a source multiple times in quick succession. In this instance, we were fortunate to catch a source changing extremely quickly, which is very exciting." 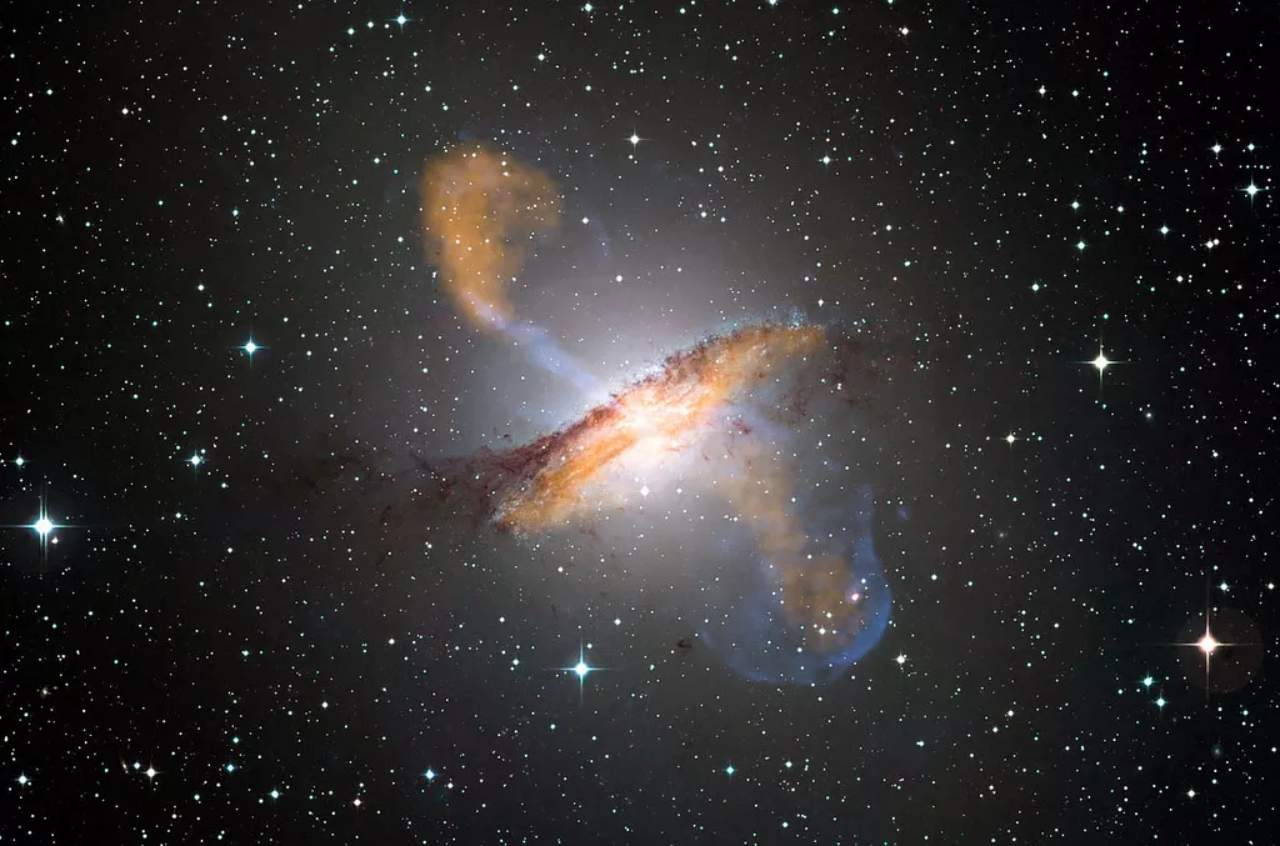 Massive jets propelling away from the black hole at the centre of Centaurus A galaxy 13 million light-years away. The jets alone stretch further in space than the galaxy itself. Image: ESO/WFI/MPIfR/APEX/NASA/CXC

ULXs are typically long-lived since their source is a dense object, like a black hole, which "feeds" on a single object for a long time. Transient X-ray sources like ULX-4 are quite rare, according to the statement, which means that even a single dramatic event — like a small star falling quickly into a black hole can offer an explanation as to what's happening. But researchers don't think ULX-4 is a one-off event and explore other possible explanations for the object in the paper.

In their view, neutron stars — dense objects formed from the explosion of a star that wasn't massive enough to form a black hole — are one likely possibility. Another is that ULX-4 is, in fact, a black hole. It's possible the light was from a black hole consuming another object like a star.

When objects get too close to a black hole, they fall into it and get ripped apart by the black hole's extraordinary gravity. As their debris is pulled into a close orbit around the black hole (the accretion disk), material at the inner edge of the disk moves at such high speeds, it "heats up to millions of degrees and radiates X-rays.

"This result is a step towards understanding some of the rarer and more extreme cases in which matter accretes onto black holes or neutron stars," Earnshaw said in the statement.