Baking in space works very differently from the way it does on Earth. In space, hot air doesn't rise.

Ever since the international space station (ISS) began functioning, it has been occupied by some of the sharpest minds that humanity has to offer. These minds have had to survive, so far, on dehydrated foods and pre-packaged meals, for weeks, if not months on end. This is now changing. Astronauts get visually appealing, nutritious meals which ensure that they are in peak physical conditions.

But it is still not pizza or fries or cookies… And speaking of cookies, DoubleTree by Hilton has sent cookie dough to the ISS to be baked and tested in space. They have joined hands with NanoRacks and Zero-G Kitchen to send cookie dough, and a specially developed oven to bake it. 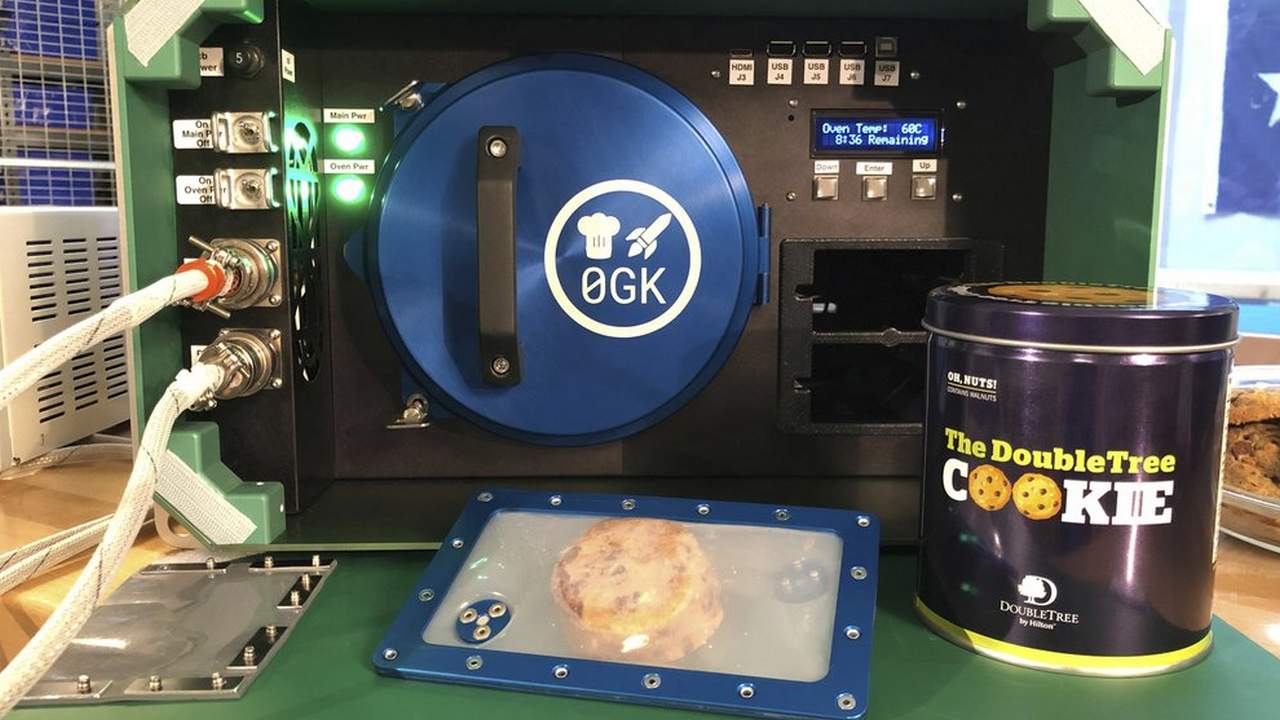 The oven, individual cookie dough and the box of cookies being sent to the ISS. Image credit: AFP

Zero-G Kitchen wants to build a kitchen in space, piece-by-piece. NanoRacks is a company that believes that space is another place to do business and wants to provide in-space services. We suppose they want to be the first name that springs to mind when zero-g catering goes mainstream, you know, when space tourism becomes a thing.

The cookie dough and the oven was sent up over the weekend on a Northrop Grumman CRS-12 spacecraft. A tin of pre-baked cookies have also been sent on this trip. Kristen Savoy, senior manager for global brand communications at Hilton, told collectSPACE, "We did not want to deprive any of the astronauts from having the opportunity to eat some freshly-baked cookies, so in addition to the dough that they're going to bake in the oven, we are sending a tin of our cookies up as part of the launch as well."

Check out these views from today's @NorthropGrumman CRS-12 launch from Wallops Island, Virginia!

The ISS does have ‘ovens’ onboard but they can only reach a temperature of 82 degrees Celsius, which is only enough to heat the food. That temperature is not enough to cooked food or even boil water.

Hot air does not rise in space and hence NanoRacks had to find a way to transfer heat to the cookie. The Zero-G Oven works by using electric heating elements placed around a cylindrical chamber so that a pocket of heated air surrounds the food. The oven can reach temperatures of 177 degrees Celsius.

Tune into @NASA TV today at 11:30 ET for the What's on Board #NG12 briefing! Our own @m312402 will be sharing what it took to design and build the @kitchen_zero space oven, and talk about some tasty @DoubleTree cookies we'll be baking on orbit! #ISS pic.twitter.com/EXmTS7Jn3n

Then came the problem of ensuring the cookie is actually stable in the oven. There was a probability that if the cookie was placed in the oven like usual, it might float around and not cook properly. To combat this, each of the cookies has been placed in individual silicone pouches that have aluminium frames. These allow hot air to escape and also trap all crumbs. Five portions of raw cookie dough from Hilton Doubletree have been chilling in the ISS freezer since summer. They're the size of hockey pucks (almost one inch thick and three inches in diameter). Nanorack manager Mary Murphy, told The Associated Press, that she anticipates a baking time of 15 to 20 minutes per cookie at about 163 Celsius.

The baking process will be slow as the oven can only bake one cookie at a time. The first cookie will be the real test as it could end up looking like a blob or a mini pancake in the absence of gravity. Three of the space-baked cookies will be returned to Earth for analysis.

"When we first talked about it, we were not even sure it was possible," said Murphy in a pre-launch press briefing on Friday, to collectSPACE. "Everyone knows how baking on the ground works, but how do you translate that to a zero-g experience?" If this cookie oven works in space, it will be helpful for the long flights that astronauts will take on their visits to other planets.

Previous station crews have created their own pizzas using flatbread and warmed them in the galley. Astronauts have attempted other creative cuisine, mixing and heating chopped onions and garlic, for instance, and whipping up salads from station-grown greens. Results have been mixed.