ISRO is launching a sub-domain under its website dedicated to all information, images from pertaining to the Chandrayaan-2 mission.

With just three weeks to go before the launch window for the Indian Space Research Organisation's Chandrayaan-2 mission opens, ISRO chairman Dr Kailasavadivoo Sivan announced a confirmed date for the launch. The mission will lift off from ISRO's island launchpad in SHAR, Sriharikota on 15 July 2019 at 2.51 am IST, Dr Sivan confirmed at a press briefing in Bangalore.

It will take all of five days for the spacecraft to move from the Earth's to the Moon's orbit, but nearly a month and a half to perform "manoeuvres" that will help the spacecraft get away from the Earth. These manoeuvres are designed to save fuel by using the Earth's gravity to boost its own velocity. ISRO's Chandrayaan-2 is expected to reach the Moon by 6th or 7th September.

The spacecraft will also use the moon's gravity to slow itself down before it tries to land on a region near the South Pole of the Moon. This is not a region visited by any lander in the history of manned or unmanned space exploration.

The Vikram lander will detach from the rocket after the necessary manoeuvres to make a soft-landing – reduce its speed while feet from the surface. This critical step is also where Israel's ill-fated Beresheet lander defaulted, causing the spacecraft to crash into the surface despite the mission protocol going perfectly to plan till midway in the spacecraft's descent.

This critical step, which Dr Sivan described as the "scariest", will take place over a span of 15 minutes on 6 or 7 September. Pragyan, the Moon rover that will be carried by the mission, is tucked inside the lander, where it will continue to stay till the landing is successful, till the lander surveys the landing site and ensures all of its systems are functioning normally. The rover Pragyan will then roll out of the lander once the path is clear. The size of a briefcase, the rover packs in two instruments and will move at a speed of one centimetre per second, according to Sivan. It can move a maximum of 500 metres, or 0.5 kilometres, to carry out its scientific missions.

#Chandrayaan2TheMoon Tech2 correspondent @woman_rednow is at @isro's ISITE in Bengaluru and we have the first glimpse at the lander and orbiter that will be part of the #chandrayaan2 #MissionMoon pic.twitter.com/BIH9Hiom1K

The Chandrayaan-2 orbiter carries the most number of instruments (all of nine) including a payload called the Imaging Infra-Red Spectrometer (IIRS) from NASA. Even as the lander touches the Moon's surface, the orbiter will continue circling the Moon at an altitude of 100 kilometres. The lander and rover are built to last one full lunar day, equal to roughly 30 days on Earth. Both are powered by solar energy and the choice of landing site on the Moon was deliberately chosen for its access to sunlight throughout the mission's duration. While ISRO can only make estimates of exactly how much power this will give the lander in reality, the hope is that it will charge the lander and rover just enough to last the full lunar day.

On a side note, the Pragyan rover’s wheels will have the chakra and a tricolour, with the Indian emblem on its side, Dr Sivan announced during a press conference in Bengaluru. The first glimpse of the lander and the orbiter. Image credit: Tech2

Why the South Pole?

This is the first time that any country will try to land that far from the Moon’s equator. The findings that come out from this mission will be very important for the scientific community worldwide. The main reason for the choice of Chandrayaan-2's landing spot, according to Dr Sivan, is its close proximity to where Chandrayaan-1 found water-ice on the Moon a decade ago. The location also has the added bonus of having fewer craters, which means there will be fewer bumps for the rover to tread over.

#Chandrayaan2: After much ado, here it is at last: the Vikram lander, the first spacecraft from India that could potentially touch the Moon's surface in September this year! @isro #Chandrayaan2TheMoon pic.twitter.com/w6ALvIp4wc

Cost to the taxpayer

ISRO has launched a subdomain today that will be a one-stop destination for all Chandrayaan-2 related information, images, research and findings as the mission progresses. 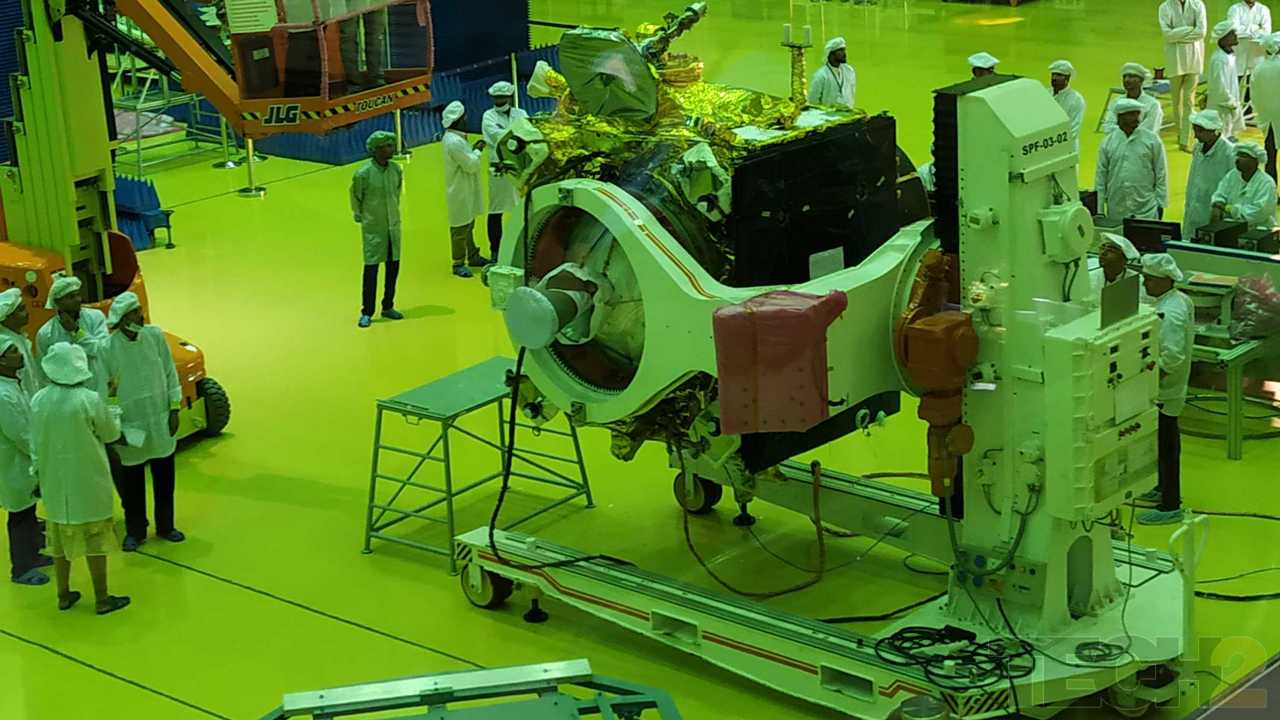 As the orbiter, lander and rover undergo final tests at ISRO's Satellite Integration and Testing Establishment (ISITE) in Bangalore, the orbiter will be shipped to Sriharikota on 14 June and the lander a few days later on 17 June, to the launch facility in Sriharikota. The final integration of all the lander on top of the orbiter into a single "composite" will take place in Sriharikota, where the GSLV-MkIII launch vehicle that will carry the mission to Earth's orbit awaits this final step in the assembly.