ISRO operates one of the most reliable and cost-effective launch platforms in the world.

Not very well, as it turns out. But that doesn’t mean we shouldn’t be proud of what ISRO's built. If the broad hints dropped by various scientists are anything to go by, building a powerful, reliable rocket is incredibly hard, consuming a vast amount of resources and taking several lifetimes in man-hours to develop.

What ISRO has developed with limited resources, limited cooperation from the world at large, strife from within, and a budget ($1.6 bn) that many space agencies would laugh at, is nothing short of enviable. 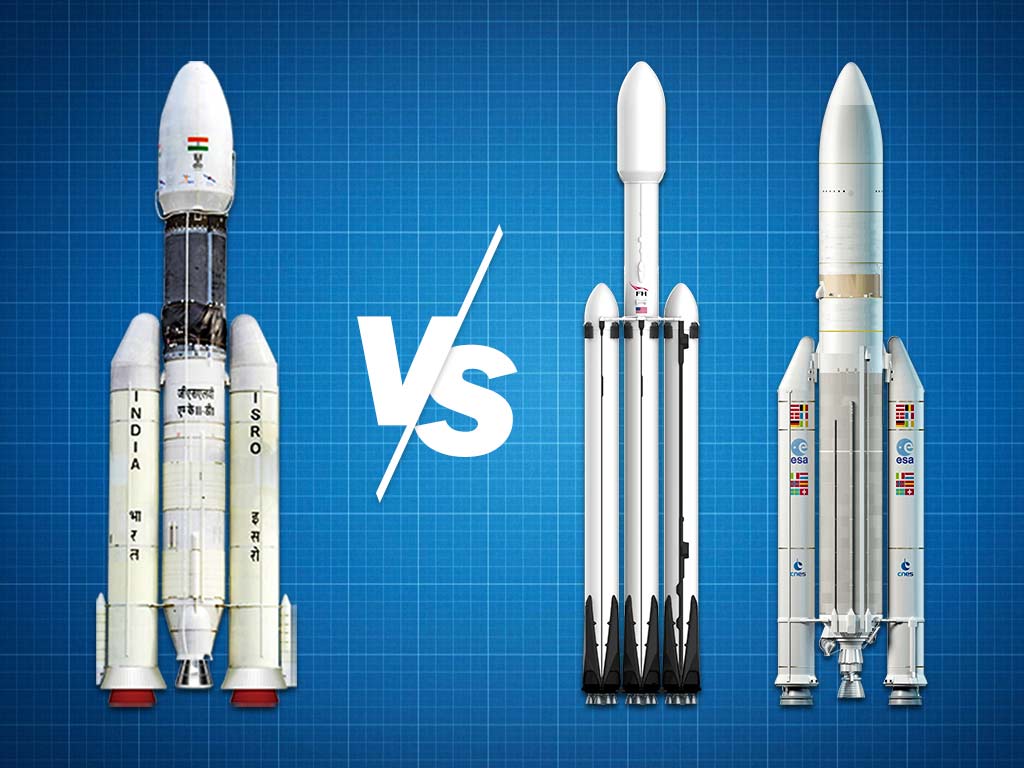 The GSLV Mk III is no heavyweight, but it is an incredibly efficient design.

Despite our limited resources, we were only the fourth nation in the world to make it to Mars and the sixth to the moon, have set a world record for the number of satellites deployed on one mission, and are commendably self-sufficient when it comes to putting our own satellites in orbit. Our targets are not small either.

In the near future, we're planning a mission to Venus (only three nations have visited the planet), to send humans to space (three countries have managed to do this) and eventually the Moon (only the US has done this), and even to set up a space station of our own (only three countries have attempted this). If Chandrayaan-2 is successful, we will also count ourselves amongst a very select group of nations to have landed a rover on an object in space, and only the fourth to soft-land on the Moon.

Still, in terms of launch capability, we do have a ways to go before we're counted among the big boys.

Our most powerful rocket only has three missions under its belt, and every rocket that matters (from the US, Russia, China, Japan and Europe) can carry at least 2.5 times the payload – 22 tonnes on average to the GSLV's 8 tonnes – that our best launcher can manage. We are also nowhere close to developing reusable motors for our launch vehicles. Launch vehicles that are currently in development around the world are expected to carry in excess of 100 tonnes to orbit.

Here's how India's GSLV Mk III compares with the best rockets in the world.

The GLSV program, which started in the early 2000s, was initially expected to carry satellites to GTO (Geostationary Transfer Orbit). This vehicle is powerful enough to go to the Moon and is capable of taking humans to space.

First stage: Two S200 boosters are strapped on to the core of the rocket. These boosters are the third-largest solid fuel boosters ever developed and the second largest in service. Only the now-retired Space Shuttle and the Ariane rockets used larger boosters. The S200s each carry 207 tonnes of propellant and deliver 5,150 kN of peak thrust.

Second stage: By far the most under-rated motor on the GSLV, the second stage rockets, designated L110, are liquid fuel rockets based on the French Viking engine. This engine was, in turn, jointly developed by Indian and French scientists. The version we use in India is called the Vikas engine.

These engines carry about 116 tonnes of fuel and generate about 1,600 kN of thrust at sea level.

This family of engines has powered over 100 launches of India’s PSLV, GSLV, and the French Ariane launch vehicles. What's remarkable is that it's never failed. It is this engine that allowed the PSLV to earn its "workhorse" nickname.

Third stage: The engine that makes the GSLV a GSLV is the third stage motor. A record-setter in its own right, this cryogenic engine is classified as one of the most powerful upper stage motors in the world.

It develops a thrust of 200 kN in vacuum and can operate for 640 seconds. For fuel, it uses a mixture of oxygen and hydrogen, which are cooled to cryogenic temperatures (below -183ºC) and are thus in liquid form.

A cryogenic engine is extremely efficient as compared to a regular rocket motor, making it ideal for spacecraft. It’s also incredibly hard to develop, which is why only a handful of nations have succeeded in building one.

The average cost of a GSLV launch is estimated to be about Rs 400 cr or $62 mn, making it one of the cheapest launch vehicles in the world.

The biggest rival to ISRO’s GLSV Mk III is the Falcon 9 Full Thrust. Designed and built by SpaceX, this launch vehicle can carry over 22,000 kg to LEO and over 10,000 kg to GTO. It’s also partially reusable and can apparently carry a 4-tonne payload to Mars. The Chandrayaan-2 mission involves a 3,800 kg payload being hurled at the Moon.

The Falcon 9 has has been launched 52 times to the GSLV’s three, and each of those missions was a success. If that wasn’t enough competition, SpaceX has managed to bring down the cost of each launch to a mere $50 mn, making it cheaper to launch than even the GSLV.

The secret to that price is, of course, is the Falcon 9's reusable first stage, which returns to Earth under its own power after launch. SpaceX has been working on reusable boosters for about 16 years now and they’re finally getting to taste the fruits of their efforts.

The design of the Falcon 9 is very different from the GSLV’s. Where the GSLV uses three stages, which includes a couple of strap-on boosters, the Falcon 9 integrates everything into a 2-stage structure. And rather than carry a single, large engine, the Falcon 9 operates a total of 10 small engines. These are all liquid-fuel engines.

First stage: The first stage comprises nine Merlin 1D engines that run on a mixture of liquid oxygen and rocket-grade kerosene (RP-1). At full power, the engines generate 7,607 kN of thrust at sea level and 8,227 kN in the vacuum of space. Adding to the reliability of the vehicle is the fact that the mission can be completed successfully despite the loss of two of the nine Merlin engines.

Second stage: The second stage is a Merlin 1D Vacuum engine that generates 934 kN of thrust and can operate for 397 seconds. The engine can be started and stopped as needed to place satellites into multiple different orbits as part of a single mission. This engine also uses liquid oxygen and RP-1 as fuel.

If it’s a true behemoth you seek, look no further than SpaceX’s Falcon Heavy. This beast is basically the most powerful launch vehicle in the world right now, and the second most powerful rocket ever built. It carries almost three times the payload of the Space Shuttle and its capacity is only topped by the Saturn V rocket, which was the vehicle that took Neil Armstrong to the Moon.

This vehicle is in an entirely different league and nothing else in the world comes close.

At launch, all 27 engines operate at full thrust. The centre stage powers down soon after and powers back up after the side cores separate. The central stage will also separate once it runs through its fuel.

Second stage: This stage is identical to the Falcon 9’s second stage and is powered by a single Merlin 1D Vacuum engine.

SpaceX also claims that this is the most cost-effective heavy-lift rocket in the world. SpaceX pegs the cost of taking an 8-tonne payload to GTO at $90 mn. A heavier payload, where the boosters are not recovered, could cost about $150 mn.

The Falcon Heavy has so far been launched only twice – the first took a Tesla Roadster to space. Both missions were a success. The third mission is planned for 24 June 2019. The boosters from its second mission will be reused here.

If the PSLV is ISRO's workhorse, the Ariane 5 is Europe's. Various versions of this launch vehicle have been in service since 1996 and since then, the system has managed to pull off over 100 missions. Of these, there have only been two complete failures and three partial failures.

The current versions, the Ariane 5 ECA and ES, have at least 76 missions under their belt. These rockets can carry a payload of over 21 tonnes to LEO and a little over nine tonnes to GTO. The total cost of a launch can go up to $220 mn, but most commercial launches are pegged at about $60 mn.

First stage: The first stage comprises two solid stage boosters designated EAP P241. As mentioned earlier, these are the only boosters in service that are larger than the ones on the GSLV Mk III. Each booster generates 7,080 kN of thrust and can burn for 140 seconds. These are expendable.

Main stage: The cryogenic main stage generates 960 kN of thrust at sea level and 1,390 kN in vacuum. It has a burn time of 540 seconds and is also expendable.

Second stage: There's a choice of two engines here. Depending on its configuration, the vehicle can use either the HM7B cryogenic engine that delivers 67 kN of thrust for 444.6 seconds or the Aestus engine that develops 29.6 kN of thrust with a burn time of 324 seconds. The latter is used for inserting payloads into multiple orbits as the former lacks that capability. The payload sits above this stage.

In 2017, the Ariane 5 set a world record by launching a 10,865 kg payload to GTO. This is the heaviest payload humans have ever inserted into GTO.

The Ariane 5 is to be succeeded by the Ariane 6 in 2020 or 2021. The new rocket is designed to be at least as capable as the Ariane 5, but at half the launch cost. The aim is to double the number of rocket launches per year.

For the sake of comparison, here’s how ISRO’s GSLV Mk III compares to some of the world’s best launch vehicles.