The PSLV has proved itself one of the most reliable rockets not just at ISRO, but in the world.

The Indian Space Research Organisation (ISRO) launched the PSLV-C43 mission on 29 November 2018 to place an Indian Earth observation satellite (HySIS) and 30 other commercial satellites in orbit above Earth. The launch took place at 9.57 am IST in the PSLV-C43 mission, on the lightest variant of the PSLV rocket. Over the years, PSLV has become ISRO's dependable workhorse, and a standard for the agency's inexpensive satellite rideshares to orbit.

Here's a deep dive into what makes the Polar Satellite Launch Vehicle (PSLV) rockets so efficient.

The third generation was the Polar Satellite Launch Vehicle (PSLV), which had its first flight in 1994. Since then, the PSLV family has grown to have three variants: the PSLV-G, the PSLV-CA, and the PSLV-XL.

A multi-stage launcher, the PSLV family has four rocket stages stacked one on top of the other – each driven by their own engine and propellant.

A workhorse with many stages

The PSLV was the first of ISRO's rockets to be equipped with liquid rocket stages.

There’s an important advantage that multi-stage rockets like PSLV offer: as propellant is used up by the rocket, these stages can be parted with and discarded, making the rocket less bulky.

In the majority of rockets, the propellant often weighs a lot more than the payload carried on board.

As propellant gets ignited and used up by one of the rocket’s stages, the rocket sheds the bottom-most stage and the next stage is ignited to further power the rocket’s ascent.

No two stages are identical

The PSLV is a four-stage launch vehicle, with alternating liquid and solid stages.

The PSLV-CA variant is the lightest version of the PSLV rocket – the core-alone version – that only uses the four core stages without the 6 strap-on boosters that give added thrust to the other two PSLV variants.

Each stage is built to power the rocket through a different phase in the launch process. The many PSLV Variants over the years. The three active PSLV launchers are now the PSLV-G, PSLV-CA and PSLV-XL. Image courtesy ISRO

The first stage (PS1) is the big daddy of PSLV’s thrusters. It provides the massive amount of thrust (4800kN of it) needed to lift all 1,750 kilograms of the PSLV off the launchpad.

To do this, PS1 uses up 1,38,ooo kilograms of HTPB (Hydroxyl-terminated polybutadiene) fuel, powered by a S138 (solid) booster engine.

The PS1 is also where the PSLV-G and PSLV-XL have strap-on boosters attached to give it added thrust.

The PSLV’s second stage (PS2) is powered by the indigenous Vikas engine, a liquid engine developed by ISRO in the early 1990s.

Liquid engines in the PSLV give it the rocket better bang for the buck of rocket fuel. The amount of fuel in the propellant tanks can also be relatively low, with lightweight pumps that can easily push the propellant into the combustion chamber of the Vikas engine.

The PSLV’s third stage (HPS3) is a solid engine that gives the upper stages of the launcher a huge amount of thrust after the atmospheric phase of launch.

The PS4 is the fourth and final stage of the PSLV rocket and is responsible for the injection of the PSLV payloads into their respective desired orbits.

It uses two (earth-storable) liquid engines to give the rocket thrust, and can be switched on more than once multiple times to release its payload in batches – like in the PSLV-C43 mission, where Stage 4 enginers were cut off and switched on three times for 31 satellites. 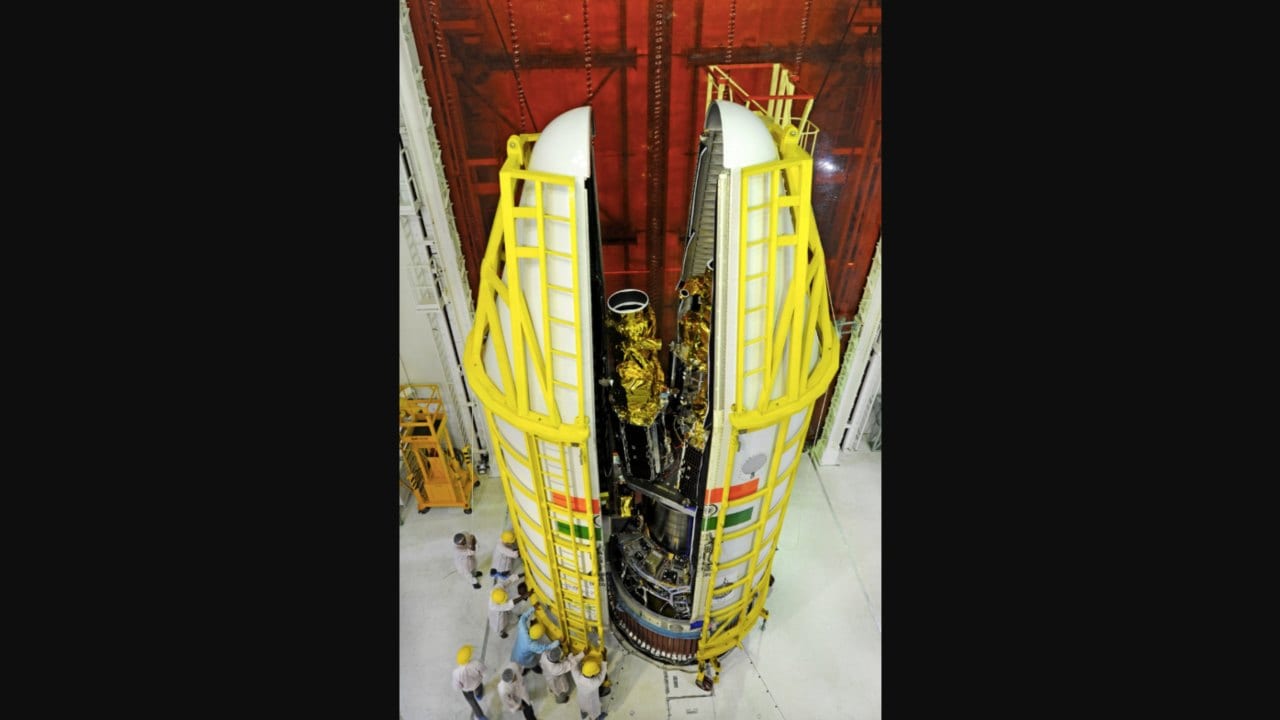 The payload fairing is covered by a nose cone fitting, together making up the topmost part of the PSLV rocket.

While the fairing houses and secures the satellites housed in it, the heat shield protects them from damage as the rocket powers through the densest part of the atmosphere, after which the PSLV sheds the heat shield.

There are different adapters for this part of the rocket, built to hold one or several satellites depending on what the mission at hand calls for. Between 1994 and 2017, the PSLV was used to launch 48 Indian satellites & 209 foreign ones into orbit. (Is anyone else curious how crowded it looks up there?)

Proving itself as one of the most reliable rockets not just at ISRO, but in the world, the PSLV- launched a record 104 satellites in a single launch in February 2017.

Some of the PSLV's biggest career highlights include the launch of Chandrayaan-1 to the moon in 2008 and the Mars Orbiter Mangalyaan in 2013.

The PSLV's future at ISRO

While the PSLV continues to see enormous popularity and success as a launch vehicle, it will be replaced by a new series of ISRO launchers – the Unified Launch Vehicles (ULVs), still under development.

The ULV project when complete, will replace the PSLV and GSLV rockets with a single, unified family of launch rockets.

While ISRO and many Indian space researchers will likely be sorry to see the PSLV retire, the ULV will bring with it many new advantages for ISRO: the capability to launch satellites more frequently, for one.

But the ULV's arrival will also give ISRO scientists more time to build on projects like the Reusable Launch Vehicle (RLV), air-breathing propulsion systems for future rockets and reusable stages in existing launchers.