The results also confirm 'neutron stars have neutrons in them' — something researchers haven't known for sure till now.

In a remarkable first, scientists have detected the formation of a heavy element in space — forged in the wake of a powerful neutron star collision.

The discovery throws light on how heavy elements are formed in the universe. It also confirms that "neutron stars have neutrons" in them, according to Darach Watson, an astrophysicist at the University of Copenhagen's Niels Bohr Institute and the study's lead author.

"That sounds really dumb, but it's something we haven't known for sure. Now, everything we've found points to elements that formed only in the presence of lots of neutrons," Watson told Space.com. Neutron stars have neutrons in them. Image: ESO

In the universe, half of all the elements heavier than iron, such as gold and uranium, were made in a "rapid neutron capture" process (r-process). These heavy elements didn't form alongside the lightest elements (hydrogen, helium, lithium) during the Big Bang. They were forged billions of years later in the hearts of stars.

For heavy atoms to form by growing to massive masses, they need to absorb neutrons — many of them, and quickly. An energetic explosion can generate a series of nuclear reactions in which the nuclei of lighter atoms collide to produce heavier elements than iron. A large number of neutrons are absorbed in the process.

The first theories about this underlying astrophysical "r-process" were worked out six decades ago. Researchers think it would require an enormous flux of neutrons to make these heavy elements "bulky". While scientists have suspected the composition of elements formed in the reaction, the location of the neutron flux, however, is still being debated.

Even tiny stars with a dense neutron core can merge after a collision, exploding as a kilonova (an even stronger explosion than a typical supernova, which happens when large stars blow up.) Kilonovas are very rare events that produce gravitational waves as well as short gamma-ray bursts. Such an event was caught on record on 17 August 2017 by the LIGO–Virgo and Fermi/INTEGRAL projects, respectively.

The kilonova AT2017gfo—which was found following the discovery of the neutron-star merger GW170817 by gravitational-wave detectors—was the first kilonova for which a detailed spectral study was carried out. 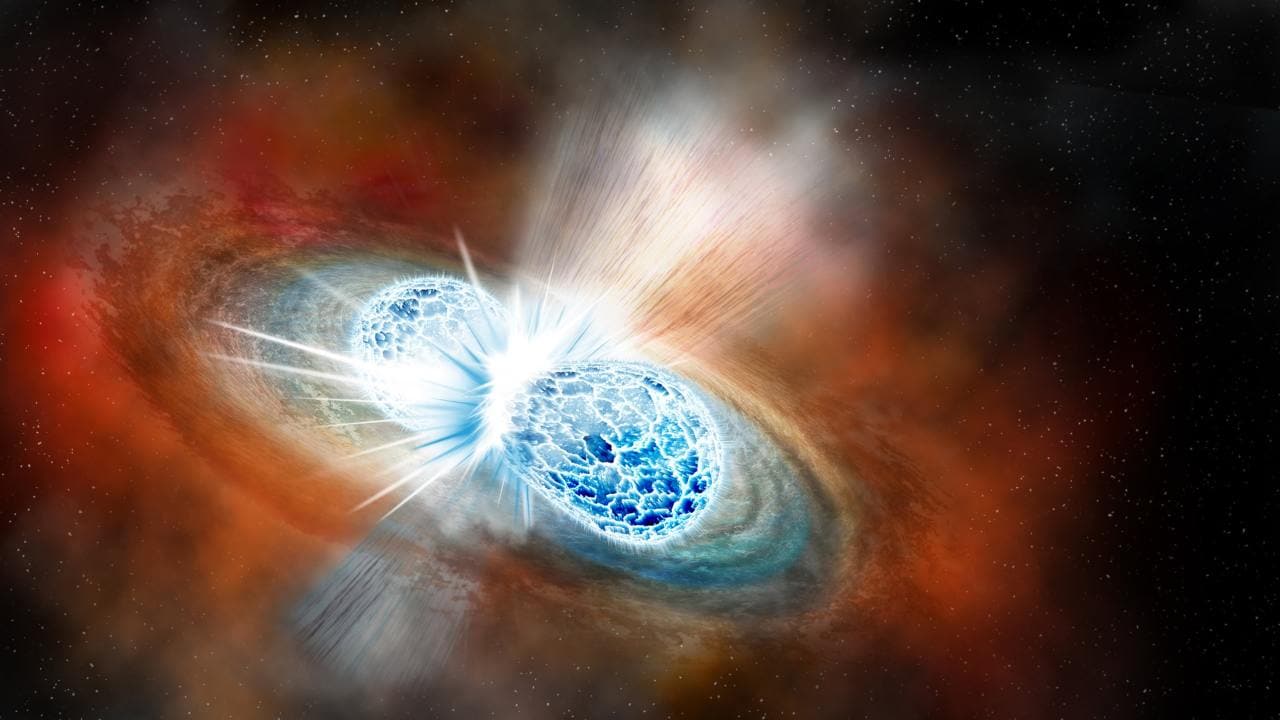 Two neutron stars collided for the first time in space, causing gravitational waves, a burst of light and precious metals to be sprinkled across the universe. Image: ESO

Kilonovas are thought to be the main source of heavy chemical elements like gold and platinum in the universe. Astrophysicists were of the opinion that seeking out freshly-synthesised heavy elements in such a collision may offer some answers.

While a lot more research is to be done before any conclusions are made, the study adds to models and indirect evidence that suggests neutron-star mergers are likely sites in the universe where heavy elements are formed.