While it is a joyous moment for all, a lot of hard work has been done by students and scientists.

"If you talk in terms of cricket, India's strike rate in the International Physics Olympiad since 1998 has been 100 percent, where every student has won at least one medal — be it gold, silver, or bronze," says an elated Shirish Pathare, chief scientific officer at the Homi Bhabha Centre for Science Education (HBCSE), TIFR.

On 28 July, five students from India won a gold medal each at the International Physics Olympiad (IPhO) 2018, making history. 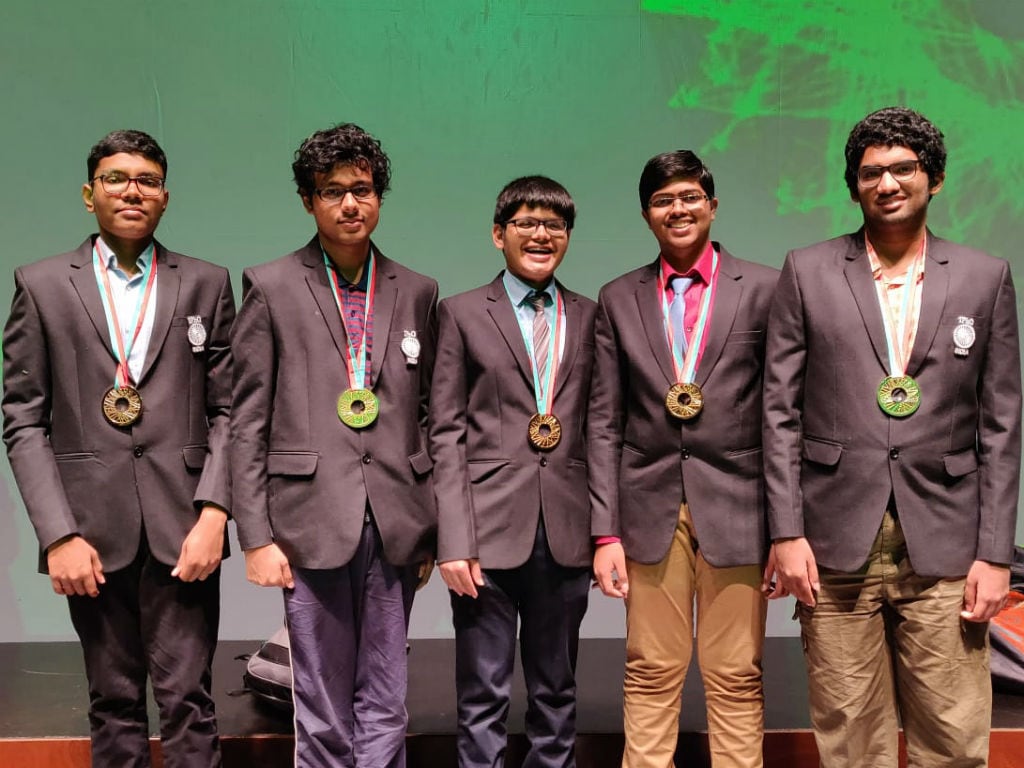 The five students who won gold at the International Physics Olympiad 2018. Twitter/@HBSCE_TIFR

The International Physics Olympiad is an annual competition in physics for secondary school students which is aimed at promoting physics education. The first IPhO took place in Warsaw, Poland, in 1967, with five participating countries. Today, over 85 countries participated in this event, including India. In 2015, the IPhO took place in Mumbai, India.

Scouting talent and nurturing them is not an easy task, especially when students have to represent the country at an international level. The selection process begins in November and an all India test takes place.

After 14 days of training, five got the opportunity to represent India in the international arena.

"It felt amazing that the five of us who came together at the event returned to India with a gold medal. It is a matter of pride for us to win a gold medal for our country," said Lay Jain,who hails from Bhopal. Jain has been selected in Massachusetts Institute of Technology (MIT), US.

Twitter was filled on Monday with congratulatory messages from all over the country, including those from Union ministers.

While it is a joyous moment for all, a lot of hard work has been done by the students — and scientists like Pathare — who relentlessly trained and prepared for the international platform.

This international stage judges their scientific temperament on two sets of examinations: one is 'Theory' and the other 'Experimental'. While theory was admittedly not too tough for the Indian candidates, the experimental part required rigorous training.

"A lab in school and in college or an institute will be same. But in school there is more focus on marks, and there is no planning regarding how an experiment will be conducted. Meanwhile in institutes, there is a paradigm shift. A lab experiment is conducted in a planned manner, the grading system is more objective," says Pathare, who has been associated with this programme since 1999.

Lay Jain and Pawan Goyal, the gold medallists at the event, agreed with Pathare. According to them, in the Indian classroom, there is more focus on theory than experiments. Goyal, who hails from Jaipur, will soon join the Indian Institute of Technology, Mumbai.

He said, "Because the focus on science is more towards theory, we hesitate when it comes to experiments. I did hesitate. When we came to the HBCSE labs, it interested us and gave us the confidence that we could also discover something. It was challenging, but worth it." He added that if students from India have to compete at an international level with respect to experiments, it will require a skill set which simple school lab experience does not help achieve. According to Jain, schools teach students standard experiments that are not innovative.

While the syllabus for these students is mostly NCERT-based, some of the topics they studied at the HBCSE included modern physics, quantum mechanics, and Relativity. Their training also included studying research papers from national and international journals.

In Pathare's experience, maintaining the 100 percent strike rate in preparing students has not been easy. "Earlier. because students did not have an immediate access to information, we used to give them IPhO's previous year papers, but now students have access to the internet and would have already done the previous years' papers. We have to make new problems for them, and this keeps us on our toes as well," he said.

While Pawan Goyal sees himself as an entrepreneur in the future, and Lay Jain as a researcher in physics or computer science, they are sure to remember how they had made their country proud along with three others by winning gold medals for India at the IPhO.