Not all droughts and excess rainfall years can be explained away by El Niño and La Niña.

It’s the middle of March, and yet, when I head out for a jog in the morning near the IIT Mumbai campus, the unbelievably mild and dry weather for this time of the year surprises me. The North of India has had a particularly harsh winter and a lot of winter precipitation as freezing rain, snow or sleet.

Many disturbances from the West have also been recorded this year. Take Omar Abdullah's word for it if not mine.

When we talk about a colder than normal winter, our attention quickly moves to these western disturbances and the Arctic air they can carry East. And almost naturally, the dreaded Polar Vortex is pointed at.

The Polar Vortex is a wide expanse of swirling cold air that is parked near the poles. The polar jet stream has received much attention since it has been bringing mountains of snow and temperatures colder than Mars over the US. Whenever winters are exceptionally cold, the term 'polar vortex' gets quite the workout. The hot debate, though, is whether the combination of warming over the Arctic and diminishing sea ice are making these polar jet stream wobbly. There's some evidence to suggest that it is. 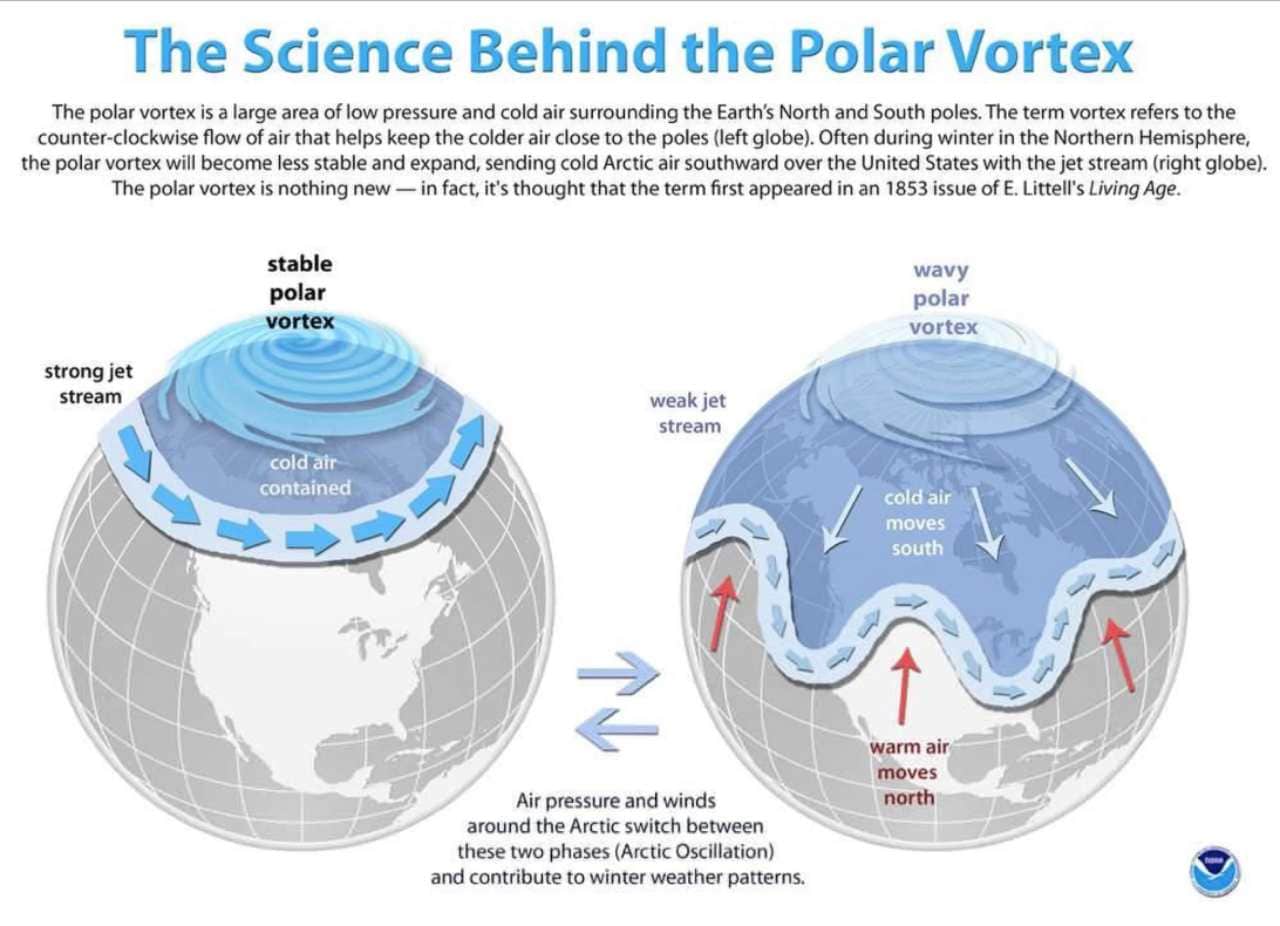 The link between the Polar Vortex and western disturbances over India, however, is tenuous at best. Western disturbances are essentially wave-trains that emerge out of the North Atlantic and propagate across the Mediterranean Sea over to the Indian subcontinent as cyclonic low-pressure systems. But what is critical for these disturbances to enter into India is the so-called "Subtropical Westerly Jet" or SWJ for short. The SWJ is anchored over northern India from October to May – throughout the year except for monsoons.

During summer, India has the famous southwesterly winds close to the surface, which bring boatloads of moisture and the 200 lakh crore buckets of water that give us the summer monsoons. What is not discussed much outside the circle of monsoon scientists is that the westerly surface winds over India during the summers are joined by easterly winds that blow over them in a so-called "easterly jet".

During winters, though, the winds reverse. Easterly winds predominantly glide over India near the surface and the SWJ above them. The SWJ is pushed far to the north during the summer months by monsoon winds and heating, but it drifts back south starting October onwards till May. The Himalayas tend to split this jet on some occasions. And the El Niño can decide how far south it drifts. It is this SWJ that acts as a pipeline – a conduit – to the western disturbances. Enter El Niño and La Niña, again.

El Niño has gotten itself a reputation for being the main driver of rainfall deficit during India's summer monsoons. La Niña, on the other hand, tends to bring excess rains. That said, not all droughts and excess rainfall years can be explained by El Niño and La Niña.

Simulated image of the stratospheric winds over the North Pole on 18 January, 2019, showing the northern polar vortex split into two major parts – one over Canada and one over Russia. NASA

It also helps to remember that El Niño and La Niña actually reach their peak amplitude of sea surface temperature anomalies in the eastern Pacific during December though February. One reason why their influence on Indian monsoon is not always guaranteed is that monsoon takes place 6 months before summer.

La Niña influences the Indian subcontinent by piping in cold air from Siberia and South China which interact with the tropical heating to produce a north-south low-pressure system. The cold air associated with this north-south trough tends to extend much farther south into India. This is remarkably different than the more northwest-southeast blast of cold air associated with an El Niño. In general, the La Niña cold air thus occupies much large portion of India than the El Niño cold air.

Does this explain the winter misery of 2019? 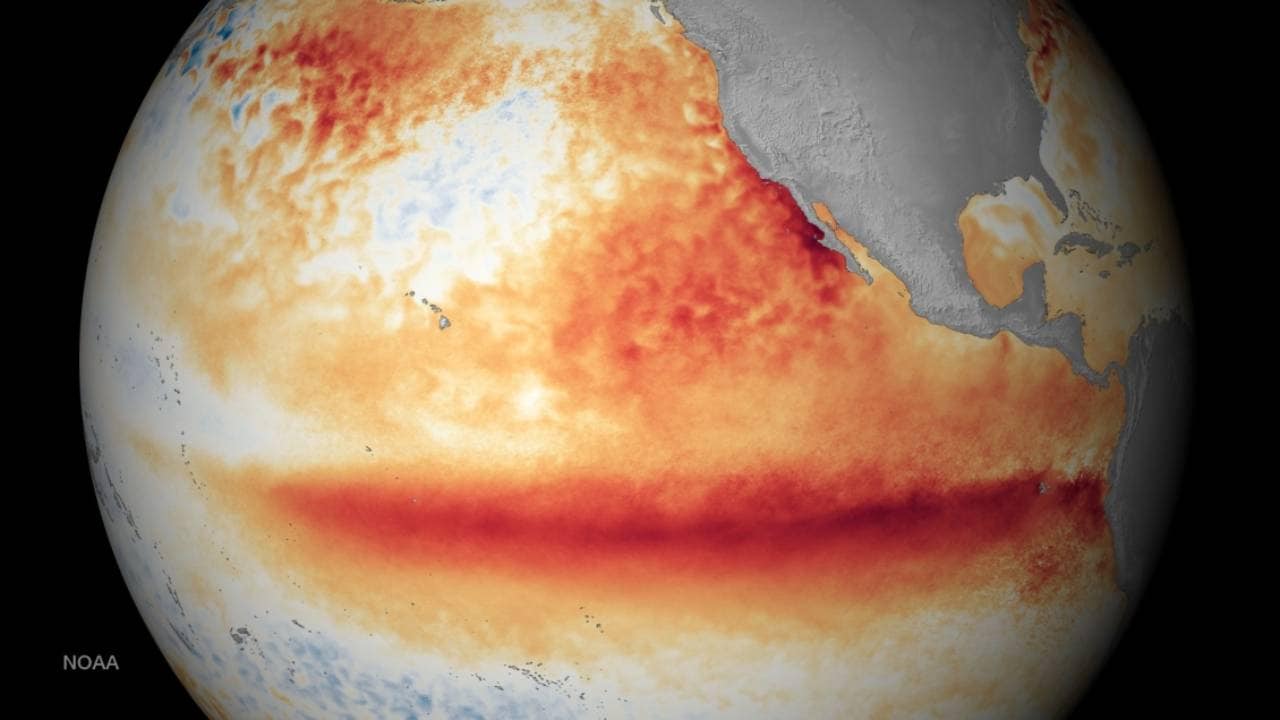 Most models had forecasted an El Niño for 2018 and it did not necessarily qualify as an El Niño by some definitions. But the eastern Pacific has remained warm and 2019 is looking to be a likely candidate for an El Niño.

This appears to be very similar to what we had in 2014 (a truant El Niño) and 2015 (a monster El Niño). In other words, the warm eastern Pacific of 2018 and early 2019, definitely explains the SWJ shift and the wave train of westerly disturbances. We obviously need to pay more attention to the machinations of El Niño and La Niña during our summers as well as our winters. Polar Vortex may not be a big player for Indian winters.

What could be more important is the warming Indian Ocean and how that affects the interaction of tropical heating, the SWJ and the cold air masses from the north and northwest. Winter precipitation over India as well as the Himalayan snowfall and the future of Himalayan glaciers will depend on these evolving intricate winter interactions. In the meantime, we have another potential monsoon drought to watch out for in 2019.