Delhi's air pollution has already caused irreversible lung damage in its youngest residents, and it’s only getting worse

Monuments may be yellowing and the weather worsening, but the biggest burden of air pollution is undoubtedly its impact on public health.

It's yet another year, and the air pollution choking Delhi every winter is still here.

It was only last year that Delhi went up against 197 other world capitals in air quality and ranked the most polluted in the world. The national capital is just in that dire a state where air pollution is concerned. Several Northern Indian states experience peak pollution in winter months, when a combination of factors — weather, farming practices, energy consumption, etc. — create the perfect storm. And while the color of monuments and weather changes are some of its apparent symptoms, what's arguably the biggest burden of air pollution is its impact on public health.

This year, air quality in many parts of the North reached toxic levels even in the days leading up to Diwali. On this festival of lights, firecracker use on top of smoke from the practice of stubble burning in the region left residents of Delhi-NCR, Uttar Pradesh, Haryana and Punjab among others in the North were gasping for clean air. Their eyes were reportedly burning from toxic air pollution. 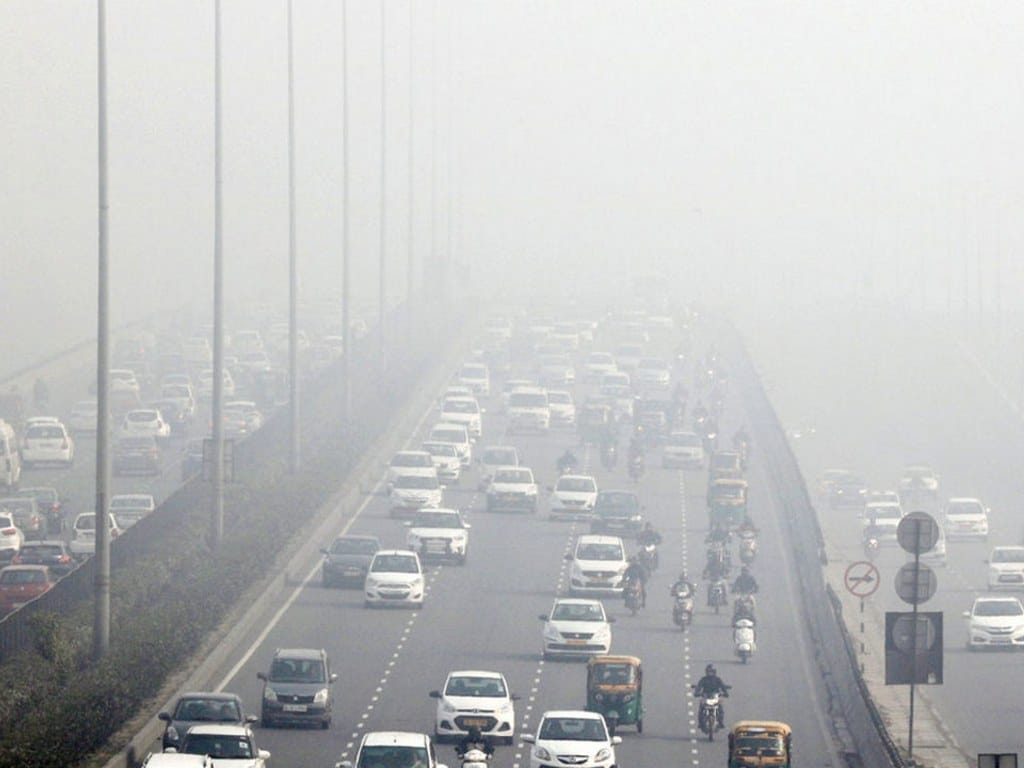 Gurugram’s air quality was 17 times poorer than the prescribed safe limit by the World Health Organisation (WHO). Image: Vinay Gupta

Half of Delhi's school-going population (some 2.2 million children) suffers from some or the other form of irreversible lung damage from poor air quality in the city. Research is now showing that pollution can weaken a child's immune system and increase the risk of cancer, epilepsy, diabetes and even adult-onset diseases like multiple sclerosis. In adults, poor air quality causes one's lung capacity to decrease, more headaches, sore throats, coughs, fatigue, even lung cancer.

Authorities restricted some 1.2 million private vehicles a day from taking to the roads in Delhi by enforcing the odd-even scheme, after the levels of particulate matter suspended in the air paved the way to a full-blown public health emergency in the region.

In 2017, air pollution was the fifth-highest mortality risk factor globally – linked to 4.9 million deaths and 147 million years of healthy life otherwise lost. Reducing global air pollution to levels recommended by the WHO would increase life expectancy worldwide as much as eradicating breast and lung cancer would, according to a Quartz report from earlier this year. Going by National Health Profile of India 2015 report, there were 3.5 million reported cases of acute respiratory infection nationwide last year – a 1,40,000 increase on the previous year, and a 30 percent increase since 2010. 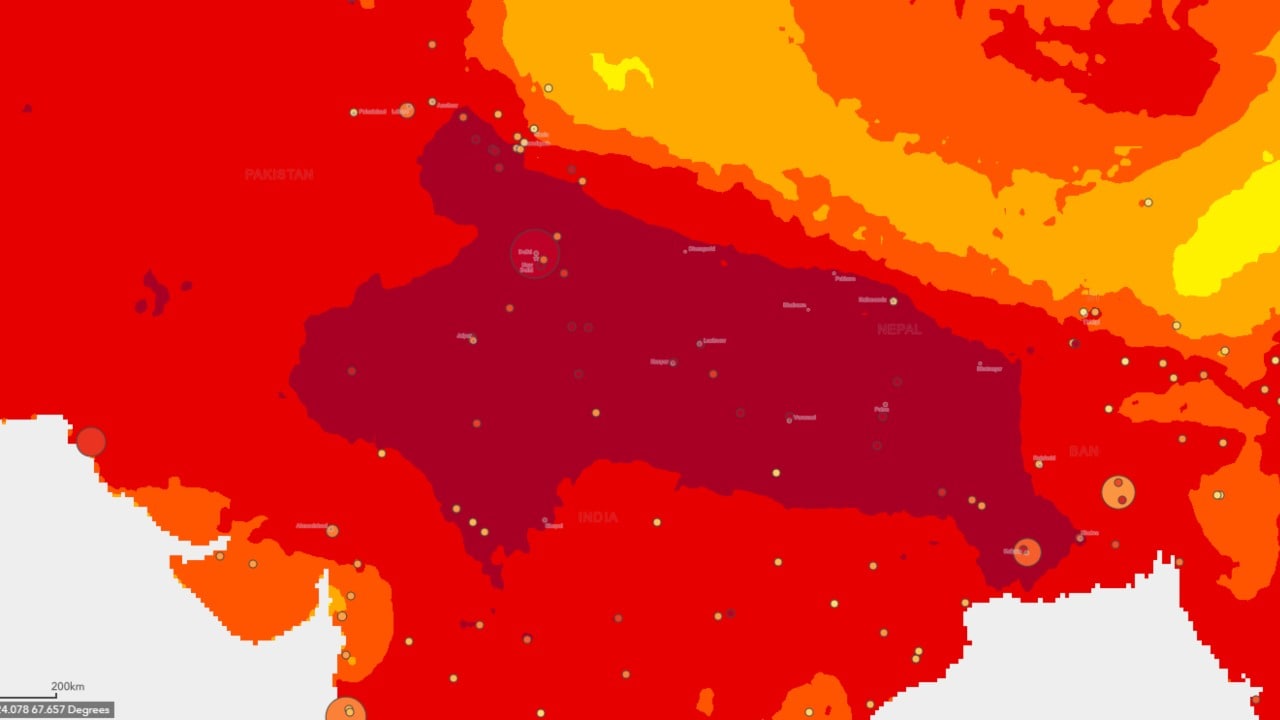 Particularly in Delhi, but also in many other cities in India, pollution peaks every year after Diwali celebrations, after a great many polluting firecrackers are set off in the name of the festival of lights. The combined effect of firecracker smoke, industrial waste, vehicular exhaust, and coal-burning often (and certainly, this year) leaves parts of Delhi-NCR in a barely-inhabitable state. This is something the Supreme Court recognised in a recent hearing on air pollution.

The SC pulled up the Centre and state governments over the toxic haze enveloping Delhi, leaving it choking year after year – something that could not be allowed in a civilised country, where "the right to life was (fore) most important," one of the judges said.

"This can’t go on. Delhi government and Centre can't just pass the buck to each other. People aren't safe even inside their houses and rooms," the court said. "Why are crops still being burnt? This happens every year and the government doesn't do anything. We will call all those responsible here and settle it now," the court said, adding that it would now monitor stubble burning.

The bulk of these firecrackers (not to be confused with "green crackers" that the government is disseminating in its first year running) have heavy metals in them. These release a lot of harmful gases when they burn. Green crackers have been announced and made available to the public, but they haven't made as much of an impact as the state expected them to. A toxic cocktail with diverse sources

Sample a bottle of Delhi's air any day of the year and you'll find a variety of particulate and gaseous pollutants suspended in it. Excessive amounts of gases like carbon dioxide, carbon monoxide, sulphur dioxide, nitrogen oxides, methane and chlorofluorocarbons, suspended particulates, among others, make air pollution a many-headed Hydra.

The cost of underestimating particulate matter pollution is asphyxiation and death itself. Image: NW18 Creative

Much of the pollution that falls under PM2.5 comes from combustion. Some 95 percent of all the emission from diesel, petrol, and natural gas combustion, open waste burning, biomass burning, and coal in cookstoves and boilers, falls under PM2.5. PM10 pollution, on the other hand, comes largely from mechanical processes — dust on the roads, dust at the construction sites, and the seasonal dust storms. And while we the general public don't need to concern ourselves with the nitty-gritty details, the Air Quality Index (AQI) is a general, accessible report of the daily air quality in an area. AQI readings indicate how clean or polluted the air around you is, and the associated health effects it might have.

PM10 was, for the longest time, the only fraction of particulate pollutant measured in India. Only in 2009 was PM2.5 included, after which it has been measured consistently in 40+ Indian cities every day using continuous monitoring stations.

You can find real-time levels of PM2.5 and PM10 across various Indian cities here.

Many of these weather service providers, including the Earth Science Ministry's SAFAR program, track the stubble burning every year with fine focus. Satellites are one of the best tools to accurately track events on the ground, and how much of the corresponding pollution these events contribute to poor air quality in neighboring states and cities.

Using data from the All India Central Control Room for Air Quality Management (a Central Pollution Control Board undertaking), a month-by-month look at fluctuations in the pollution levels since 2017 is mapped below. This time of the year, a lot of monitoring and forecasting is carried out by public and private weather service providers — and for good reason. The pattern of pollution in winters sees a stark and predictable increase before dropping to still-dangerous levels of pollutants suspended in the air in summers.

PM2.5 & a surge in respiratory infections

That said, stubble burning is a seasonal addition to a problem that is already rather serious. Motor vehicle exhaust gas, according to an UEInfo report, is the biggest contributor to Delhi's air pollution problem, responsible for 30 percent of PM 2.5 concentration in the capital's ‘airshed’ annually.

While Delhi undoubtedly has a dire pollution problem, it gets a disproportionate share of media attention for it. Ironically, this media attention hasn't helped provide any clarity or offer decisive answers from the scientific/weather communities as to how polluted the city really is, what the sources of pollution are, and where to begin as far as pollution control goes. When do we think of Delhi's air pollution? Image: UEInfo

If air quality stays "severe" or higher in Delhi for 48 hours or longer, a series of actions have been planned to reduce the pollution, as per the Graded Response Action Plan. It declares (for the time being) schools are closed, all building and construction is halted, and schemes like the odd-even scheme are activated. Unfortunately, disproportionate media coverage has also coincided with a lack of political will to implement similar pollution control strategies in other states, irrespective of how poor the air quality in the place is.

The urgency to address the problem, and quickly, comes from the surge in respiratory illnesses in some of the most polluted cities. Delhi was ranked the capital city with the worst air quality globally, out of 197 others. In the Global State of the Air Report 2018, 15 of the 20 cities with the most toxic air quality in the world were in India, all of them in the same band stretching across several Northern Indian states.

The state government is shirking off 46 percent of the responsibility for Delhi's air pollution, shifting that blame to neighbouring states of UP, Punjab, and Haryana, where the bulk of stubble burning takes place every harvest season. The Ministry of Earth Science's SAFAR program also asked implementing agencies to "take immediate stringent action to stop stubble-burning in the neighboring states of Punjab and Haryana." For farmers in Haryana and Punjab, stubble burning saves time, labor and money – something their respective governments haven't factored into a suitable action plan to end the practice (yet) for good. There isn't a clear timeline of action or planned action to defeat the menace of air pollution in Delhi.

The biggest loser, as a result, seems to be the public, who can choose to lose their health, or take extraordinary measures to protect themselves, or move out of the city entirely to be rid of the day-on-day exposure to toxic levels of air pollution. It's not that the necessary interventions are unknown. We know that reducing air pollution needs a sustainable shift in urban transportation, better solid waste management practices access to clean household fuels and cookstoves, investment in renewables and better energy efficiency, and limiting industrial emissions.

Policy interventions are an important tool that has worked wonders in bringing down air quality in big cities, both in India and overseas. Parallelly, local initiatives at the city-, state- and national-level are more focused and time-bound approach to tackling the problem. A National Clean Air Programme (NCAP) to reduce air pollution at regional and urban scales is growing more urgent and necessary by the year.

In the meanwhile, smog, and smoke continue to fill Delhi' air weeks after Diwali.