A child born today, throughout its life, will breathe toxic air, face the risk of extreme weather events unless we get our act together

by Mayank Aggarwal and Sahana Ghosh

Do you have family or friends celebrating the arrival of their newborn? Wondering what to gift the baby? How about a pollution-free environment? Young people around the globe are striking for a future safe from climate change impacts. Now, a new report confirms that these FridaysForFuture climate strikers have every reason to fear.

The latest research published in The Lancet warns that climate change is already damaging the health of the world’s children and threatens lifelong impact unless the world gets its act together to meet the Paris Agreement target of limiting the rise in global temperature to well below two degree Celsius above pre-industrial levels. 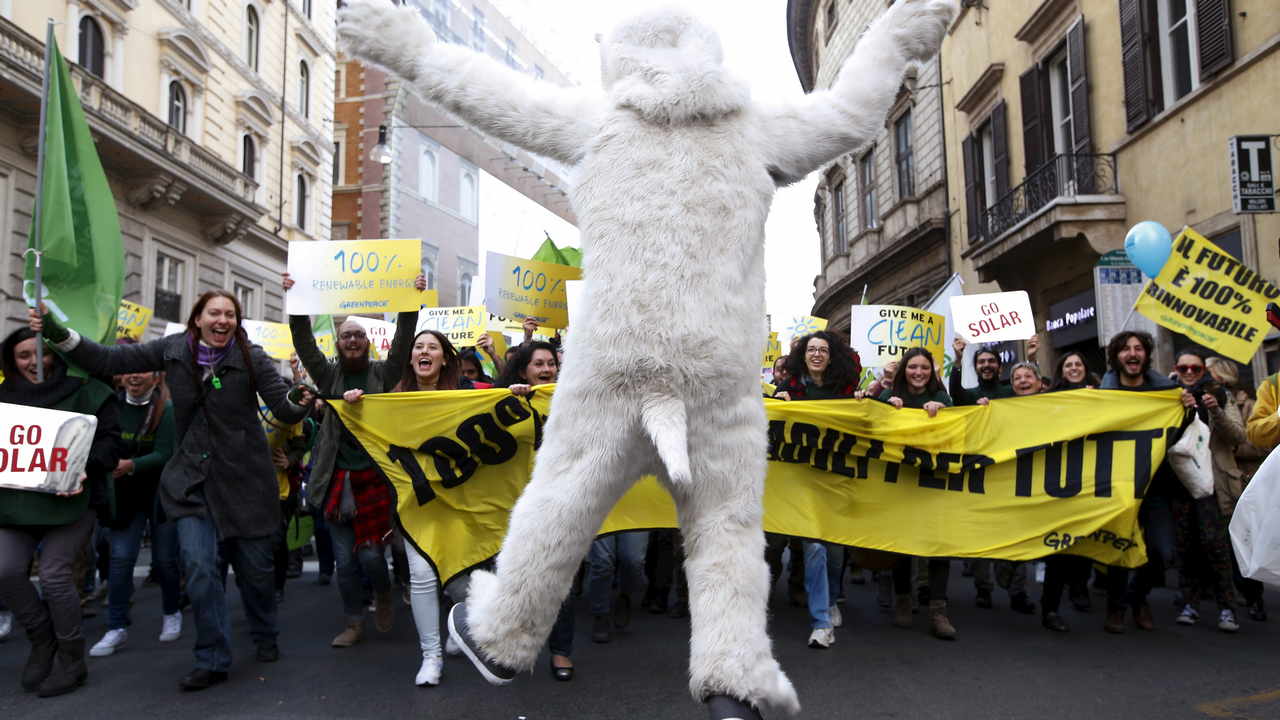 Activists protest climate change as a protester dressed in a polar bear suit cheers them on.

In India, air pollution, particularly the dangerous levels of outdoor fine particulate matter (PM2.5), contributed to over 529,500 premature deaths in 2016. Over 97,400 of these deaths were from particulate matter emissions from coal. The total energy supply from coal, however, has continued to increase and gone up by 11 percent in India from 2016 to 2018, as per the report. This year, schools in Delhi and the adjoining regions were closed for several days due to hazardous levels of air pollution.

Globally, the premature deaths attributable to ambient fine particulate matter (PM2.5) were 2.9 million while the total number of premature deaths caused by overall air pollution reached seven million in 2016. High exposure to polluted air early in childhood is highly damaging as children’s lungs are still developing and polluted air can result in reduced lung function, worsening asthma, and high risk of heart attacks and other diseases, health experts have noted.

According to the report, a child born today, throughout adolescence and into adulthood, would be breathing more toxic air driven by fossil fuels, made worse by rising temperatures and resulting extreme weather events like severe floods, prolonged droughts, and wildfires.

Stella Hartinger, a co-author of the report, from Peru’s Cayetano Heredia University, said that the path that the world chooses today will irreversibly mark our children’s futures.

“We must listen to the millions of young people who have led the wave of school strikes for urgent action. It will take the work of 7.5 billion people currently alive to ensure that the health of a child born today isn’t defined by a changing climate,” said Hartinger in a statement.

‘The Lancet Countdown on Health and Climate Change‘ is a comprehensive yearly analysis tracking progress across 41 key indicators, demonstrating what action to meet Paris Agreement targets—or business as usual—means for human health.

It is a collaboration between 120 experts from 35 institutions including the World Health Organisation (WHO), World Bank, University College London, and Tsinghua University.

The research highlighted that as temperatures rise, infants will bear the greatest burden of malnutrition and rising food prices. For instance, it said, the average yield potential of maize and rice has declined almost two percent in India since the 1960s with malnutrition already responsible for two-thirds of under-five deaths.

According to the official data of the Indian government, under-five child mortality, attributable to a variety of reasons including malnutrition and pollution-related diseases, was 39 per 1000 in 2016.

Impact of air pollution to worsen

Poornima Prabhakaran from the Public Health Foundation of India, who is the co-author of the India policy brief accompanying The Lancet report said that public health gains achieved over the past 50 years could soon be reversed by the changing climate. “Over the past two decades, the government of India has launched many initiatives and programmes to address a variety of diseases and risk factors. But the progress made in sectors such as maternal mortality, child mortality among others could be set back by climate change in a business as usual scenario,” Prabhakaran said.

She told Mongabay-India: “When you bring in children there is a sense of urgency to it. Addressing climate change cannot be thought of as separate from addressing health. They are intertwined.”

With updated Nationally Determined Contributions under the Paris Agreement due to be submitted by 2020, health considerations should be integrated throughout India’s proposed interventions, with particular consideration to vector-borne diseases, food security and nutrition, and energy policy, Prabhakaran said quoting the policy brief.

Of the total deaths in India in 2017, 1.24 million deaths, equivalent to 12·5 percent of total mortalities, could be attributed to air pollution, said a paper by the India State-Level Disease Burden Initiative.

According to atmospheric scientist Sagnik Dey, who was not associated with the report, one key factor about air pollution is that the risks increase as the population ages.

“Therefore, even if the pollution does not increase, the burden will increase because of the rising population and aging of the population. Having said that, it is important to understand that pollution is also projected to increase in the future in the business-as-usual scenario,” Dey of the Indian Institute of Technology, Delhi told Mongabay-India.

In a 2019 study by Dey and colleagues, they warned that improved sanitation access for children in rural areas may arrest stunting but early-life exposure to high levels of air pollution could play spoilsport in realising these benefits. Their study found that exposure of foetus and newborns to outdoor air pollutants (PM 2.5) is significantly associated with deficits in child height. This could negate the benefits from Swachh Bharat, the national sanitation campaign.

In an earlier interaction with Mongabay-India, population researcher Dean Spears of Department of Economics and Population Research Center, the University of Texas at Austin, who has explored the ‘Asian enigma’ as in why Indian children (mainly in rural India) are shorter than poor African children, drove home the point that the child health impacts due to air pollution in India need attention because the problem is getting worse, not better.

Among policy interventions by the Indian government, the health ministry has formed a steering committee that recently published a report on a multi-sectoral approach to combat air pollution. Additionally, earlier this year, the Indian government unveiled a National Clean Air Programme (NCAP) for pan India implementation of efforts to tackle the increasing air pollution problem.

“One can hope that these efforts will drive intersectoral mitigation measures in the future to create a cleaner India just like the policy interventions after the Great London Smog event of 1952 succeeded in making London one of the cleanest cities in the world,” said Dey.

The Lancet’s study further revealed that globally, in 2018, 133.6 billion potential work hours were lost to temperature rise and heatwaves and this is 45 billion hours more than in 2000. In India, 22 billion additional hours of work lost due to extreme heat since 2000 and among those 12 billion were in the agriculture sector alone which is the backbone of the country’s economy.

Children more susceptible to infectious diseases due to climate change

The report also spotlights that rising temperatures and changing climate patterns have made children more susceptible to diseases. For example, spurred on by climate change, dengue is the most rapidly spreading mosquito-borne viral disease in the world as nine of the 10 most suitable years for dengue transmission have occurred since 2000.

The number of cases and deaths due to dengue has also steadily increased over the past two decades in India. Originally restricted to the plains, dengue is now increasingly common in the hilly regions, and vector suitability in western as well as north-eastern Himalayan states is rising, according to the accompanying India policy brief. 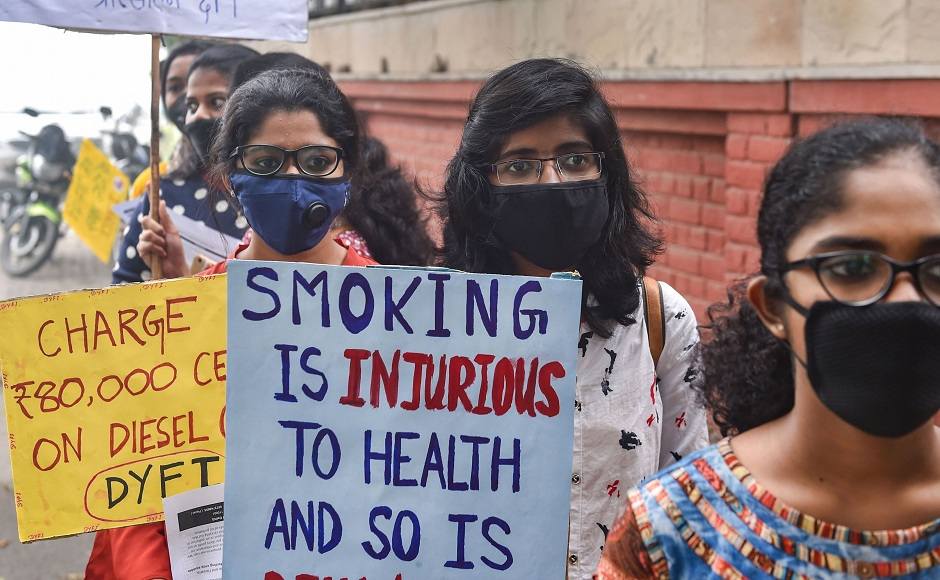 The Himalayan states of Himachal Pradesh, Uttarakhand, Manipur, Mizoram, Nagaland, Sikkim, and Tripura have seen 15-20 fold increases in numbers of cases since 2013. Similar trends have been observed in the southern states of Tamil Nadu and Kerala, the policy brief said.

Similarly, climate change is altering spatial and seasonal patterns of malaria, threatening progress made by India to date in controlling the disease, said Prabhakaran.

The tropical highlands are becoming more suitable for the development of the parasite and for disease transmission. Based on transmission window criteria, in the 2050s, malaria is likely to persist in Orissa, West Bengal and southern parts of Assam, bordering north of West Bengal. Some new states may become malaria prone in the north and northeast, including Himachal Pradesh, Arunachal Pradesh, Nagaland, Manipur, and Mizoram. The burden will primarily shift from the central Indian region to the southwestern coastal states of Maharashtra, Karnataka, and Kerala, the India policy brief elaborated.

The report stressed that pursuing the Paris Agreement pathway to limit global warming to well below two degree Celsius below the pre-industrial levels, will allow a child born today to grow up in a world which reaches net-zero emissions by their 31st birthday – and secure a healthier future for coming generations.

But, if the world follows a business-as-usual pathway, with high carbon emissions and climate change continues at the current rate, a child born today will face a world on average over four degree Celsius warmer by their 71st birthday, threatening their health at every stage of their lives.

The authors of the report called for the health impact of climate change to be at the forefront of the agenda at the United Nations Climate Conference (COP25) next month. Prabhakaran said that children and young adults raising these important issues worldwide has contributed to a heightened awareness among the public and policymakers, forcing them to take note.

Children and young people represent 30 percent of the world’s population. Over 99 percent of deaths — already attributable to climate-related changes — occur in developing countries and children make up over 80 percent of those deaths, the 2014 UNICEF report ‘Challenges of Climate Change: Children on the Front Line’ emphasised.

Underscoring the backdrop of climate change, the loss of biodiversity and environmental damage, the latest UNICEF report warned that an alarmingly high number of children are suffering the consequences of poor diets and a food system that is failing them.

Facing this inequity in terms of climate impacts and recognising that the environment around them is at risk, youth activists across the globe have vehemently protested the government and business inaction on climate change in recent years. In the latest protest, 16-year-old Swedish climate activist Greta Thunberg led thousands of people across 150 countries on Friday, September 20, 2019, in the Global Climate Strike.

For more stories and analysis on the UN COP25 Summit, head here