COP25 primer: Everything you should know about how we got here, where we're headed

COP25 is the final dialogue between parties since the Kyoto Protocol before the Paris Agreement goals are enacted, starting 2020.

The Conference of Parties, or CoP, is the annual meeting of the representatives from the countries that are members of the United Nations Framework Convention on Climate Change (UNFCCC), also known as the Climate Change Convention.

It is as the CoPs that the member countries assess the progress of the implementation of the goals of the Convention and plan the next steps on dealing with climate change. The 2019 conference, COP 25, is currently taking place in Madrid, Spain from 2-13 December.

UNFCCC, Kyoto Protocol, Paris Agreement: What do they all mean?

In June 1992, the United Nations organised an important summit meeting on the environment – the United Nations Conference on Environment and Development (UNCED) where more than 100 heads of states participated to design ways to prevent global environmental degradation. At the UNCED – also known as the Earth Summit or the Rio Summit, since the Conference was held at Rio de Janeiro in Brazil – the UNFCCC (Climate Change Convention) was designed and agreed upon by the participating member states. Environmental supporters march with a mock Statue of Liberty carrying the inscription "Freedom to Pollute" on the first day of high-level talks at the Rio+20 conference in June 2012, Rio de Janeiro, Brazil. Over 100 heads of state and tens of thousands of participants and protesters have descended on Rio de Janeiro, Brazil, for the June 20-22 high-level portion of the Rio+20 United Nations Conference on Sustainable Development or ‘Earth Summit’. Image: Getty

The UNFCCC is a framework convention, which requires member countries to initiate national policy and legislation for its implementation. It went through a two-stage endorsement process where each country’s head of state or environment minister signed the Convention, and it was later ratified by each country’s national legislative body. The UNFCCC is the basis for international cooperation to combat climate change by limiting average global temperature increase.

The UNFCCC entered into force in 1994 with 197 parties agreeing that greenhouse gas emissions are the leading cause for climate change. Following that, the first UN climate change Conference of Parties to UNFCCC was held in 1995 in Berlin, Germany.

At the third CoP held in Kyoto in Japan in 1997, an international agreement subsidiary to the Climate Change Convention was developed. Called the Kyoto Protocol, this agreement legally binds developed countries to emission reduction targets. Developed countries agreed to reduce their greenhouse gas emissions to 5.2 percent below 1990 levels by the Protocol’s first commitment period started in 2008 and ended in 2012. The developing countries did not have emission reduction targets. Visitors chat in front of a giant screen featuring information related to the Kyoto protocol at the "Bonn Zone" on November 8, 2017 during the COP23 United Nations Climate Change Conference in Bonn, Germany. Image: AFP/via Getty

The second commitment period for the Kyoto Protocol began in 2013 and will end in 2020.

The Paris Agreement will come into effect in 2020 and replace the Kyoto Protocol.

What’s happening at COP 25 in Madrid?

The COP this year in Madrid is a stepping stone to next year when the new commitments to climate action come in force. The 2019 CoP aims at increasing ambitions to tackle climate change and completing processes related to the full operationalisation of the Paris Climate Change Agreement, before the 2020 climate summit. President of the House of Representatives of the United States, Nancy Pelosi (C), during her speech at the first day of the UN COP25 Climate Summit in Ifema on 2 Dec 2019 in Madrid. Image: Getty

According to the UNFCCC, at COP 25, “Crucial climate action work will be taken forward in areas including finance, the transparency of climate action, forests and agriculture, technology, capacity building, loss and damage, indigenous peoples, cities, oceans and gender.”

Among its highest priorities this year is the establishment of the rules for creating carbon markets among nations, cities and corporations to incentivise emission-reduction strategies.

Will a world 2-degrees warmer really be that bad?

Longer heat waves, more intense rainstorms, seas eating into coastal cities, the disappearance of corals and crop production impacted negatively, putting pressure on food security – these are just some of the impacts if temperatures go up by 2 degrees Celsius. Keeping temperature increase to a 1.5 degree Celsius limit, versus a 2 degree Celsius increase, can reduce the intensity of climate change impact on society and natural biodiversity.

Given that global temperature is currently rising by 0.2 degrees C (±0.1 degrees C) per decade, human-induced warming has already reached 1 degrees C above pre-industrial levels around 2017. If this pace of warming continues, would reach 1.5 degrees C around 2040, notes a report by the Intergovernmental Panel on Climate Change (IPCC). Emphasising the urgency in action, in September this year, the UN Secretary-General António Guterres convened a Climate Summit bringing together governments, the private sector and civil society to support the multilateral process for accelerating climate action and ambition.

“We need more concrete plans, more ambition from more countries and more businesses. We need all financial institutions, public and private, to choose, once and for all, the green economy,” he said.

At the summit, India noted that it can only aspire to implement what it has already committed.

India’s approach at COP 25 will be primarily guided by the principles of Equity and Common But Differentiated Responsibilities and Respective Capability (CBDR-RC), underscored in the UNFCCC and included in the Paris Agreement. These principles acknowledge that while all countries shall share the responsibility of climate action, responsibility is not equally distributed among all parties. 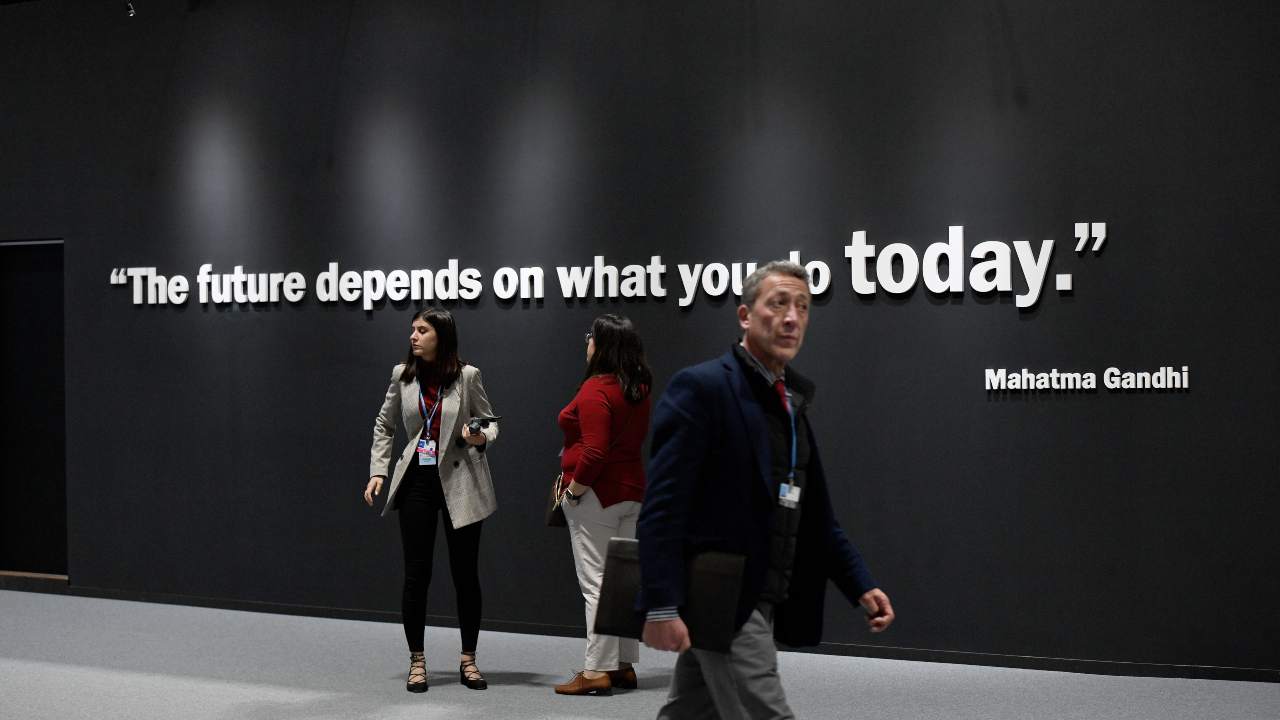 One of the several displays at the India Pavillion at COP25 in Madrid, honoring 150 years of Mahatma Gandhi. Image: Getty

In a statement, the Indian government emphasised that developed countries should fulfill their climate finance commitments and progressively and substantially scale up their financial support. The statement also noted that at COP 25, India will stress that developed countries fulfill their pre-2020 climate commitments and any implementation gaps should not weigh heavy on developing countries as climate action moves to the post-2020 period.

The Indian delegation at COP 25 in Madrid is led by Prakash Javadekar, Minister, Environment, Forest and Climate Change. The India booth at COP 25 showcases Mahatma Gandhi’s spinning wheel, charkha, as a message of sustainable living for India and the world.

For more stories and analysis on the UN COP25 Summit, head here.