Chandrayaan 2: Can ISRO get the silent, possibly broken Vikram lander on the moon to talk?

If the lander's power and communication systems aren't damaged from the crash, there is still hope of making contact with it.

Four days since the Indian Space Research Organisation lost contact with its lunar lander Vikram, word on the street is that India's second moon mission Chandrayaan 2 is a partial success at best. Vikram appears to have crashed on the moon's surface after its descent, with the uninitiated Pragyan rover still trapped inside.

Touchdown in the Moon's south polar region was expected to happen 15 minutes after the descent began, but the lander lost its communication link with ISRO mid-descent. Some experts think an engine failure might be to blame, and several experts suspect Vikram crash-landed. But ISRO has yet to confirm if the lander is intact, and is in a desperate hurry to re-connect with the Vikram lander.

DSN24 in southern California is presently transmitting a 'hello are you there Vikram?' message to the moon. The moon acts as a radio reflector and sends back a small portion of that signal that can be detected here on Earth after the ~800000km round trip. Cool no?

This effort to re-establish communication with the crashed lander will continue at least till 21 September, ISRO has confirmed, when the lander's and rover's fortnight of sunshine runs out and a 14-day lunar night consumes the near-side of the moon's South Polar region, where the Vikram lander was to land (safely).

History offers a few examples of missions in which communication was re-established hours, months, even years after losing contact with mission control. The Parkes Radio Telescope in NSW, Australia was one of several radio antennae that were used to receive live TV images of the Apollo 11 Moon landing. Image: Wikimedia Commons

Rosetta was launched in March 2004 with an aim to reach a comet 10 years later and map its surface in fine detail. It arrived at 67P/Churyumov–Gerasimenko in 2014, and sent a packet of instruments (the Philae Lander) to its surface. The spacecraft had a bumpy landing before coming to rest on 12 November 2014 in a shady nook on comet 67P. What Philae needed desperately was enough incident energy to power itself up and start communicating. Since this would also be the first opportunity for Rosetta to check up on Philae, the communication link between the Rosetta orbiter and Philae was switched on. Philae took its time to respond. It reported in on 13 June 2015, after a seven-month-long hibernation, to send ESA data about its health.

There are more differences than similarities between the two missions and spacecrafts. Rosetta was also roughly 1,000 times further away from Earth than Chandrayaan 2 during its landing, and the temperature fluctuations on the moon are a lot more drastic. The probe also landed safely, just not where it was intended. If anything, Rosetta serves as a good reminder than re-establishing communication could still be possible if the spacecraft isn't damaged.

Why does communication go offline in orbiter-lander missions like Chandrayaan 2?

In a mission like Chandrayaan 2, the communication system is a combination of antennas, transmitters and receiver units. To set up a successful communication link between a satellite/rover/lander, it is extremely important that every element of the communication channel remains unaffected by damage the likes of a crash-landing.

"Establishing communication with a satellite/rover/lander depends on some key constraints," Nekkanti said. "The storage and generation of power, for one, plays a crucial role. And planetary surfaces can be very tricky."

Whether the threat is from dust plumes that limit the amount of power being generated by solar panels, damage to its power generation capability after a rough landing, extreme temperatures that might degrade the performance of the power system, all of this has a bearing on the mission's communication to varying degrees.

How does ISRO communicate with Chandrayaan 2?

Communicating with any spacecraft in deep space requires the help of a network of ground-based antennae that make up the 'Deep Space Network' or DSN. USA, India, Russia, the European Union, China, and Japan have DSN antennae of their own. India's DSN (IDSN) facility is at Byalalu, near Bangalore. It has three antennae — an 11-meter antenna, an 18-meter antenna, and a 32-meter antenna. The 18-m antenna was built to serve the Chandrayaan 1 mission in 2008, and future interplanetary missions. The IDSN's 32-m antenna can communicate with probes in space for various purposes. It also gives ISRO remote control over a satellite from a control room (ISTRAC, in the case of Chandrayaan 2). Since India has one DSN and not multiple, NASA has helped provide vital data through its three active DNS stations — Madrid, Canberra and Goldstone — when needed. NASA's DSN antenna network in Goldstone, US listening for a response from the Chandrayaan-2 lander. Image: Screengrab from DSN Now/NASA JPL

During the final minutes of the lander's descent, telemetry screens at ISRO command centre froze — an eerily familiar scene to the crash of Israel's Beresheet lander in April this year. The lander was traveling at a horizontal speed of ~48 mps and a vertical speed of ~60 mps when communications froze, a kilometer away from the landing site. (Also read: Chandrayaan 2 Timeline: It took ISRO 15 years to get a lander on the moon — here's how events unfolded)

How do the orbiter, lander and rover communicate with ISRO?

The Orbiter was designed to communicate with ISRO's and NASA's DSN antennae directly. The orbiter has been relaying data to both networks consistently since the composite was launched on 22 July.

DSS 26 receiving data from Chandrayaan-2 Orbiter at 1.0kb/s.
IN LOCK IN LOCK 1 TURBO

The Vikram lander, too, was designed to communicate directly with Earth. In case there's a problem, the lander is also capable of communicating with the orbiter, which in turn can relay its messages to Earth. The lander can also relay images taken by the rover to ISRO's and NASA's DSN. The rover can only communicate with Earth through the lander.

How much control does ISRO have over descent & landing through the DSN?

The DSN gives ISRO complete control over the functional attributes of the lander & orbiter. With the ~3.8-lakh-km distance between the moon and Earth, a signal takes 1.2-1.6 seconds one way, creating a slight lag in any communication exchange. Between Chandrayaan 2 and mission control, this delay wasn't much of an issue.

But this also meant that complex steps, which demand millisecond precision and quick changes (like Vikram's descent and soft-landing) weren't controlled remotely or manually. Instead, the landing module followed a pre-programmed set of instructions in its navigation and guidance system to fire up its engines as needed and carry out a soft-landing on its own. Part of this process involved a thorough scan for unevenness, rocks, and tilt in the chosen landing site, all of which were for the Vikram lander's intelligence programming to figure out and send appropriate commands to the engines. 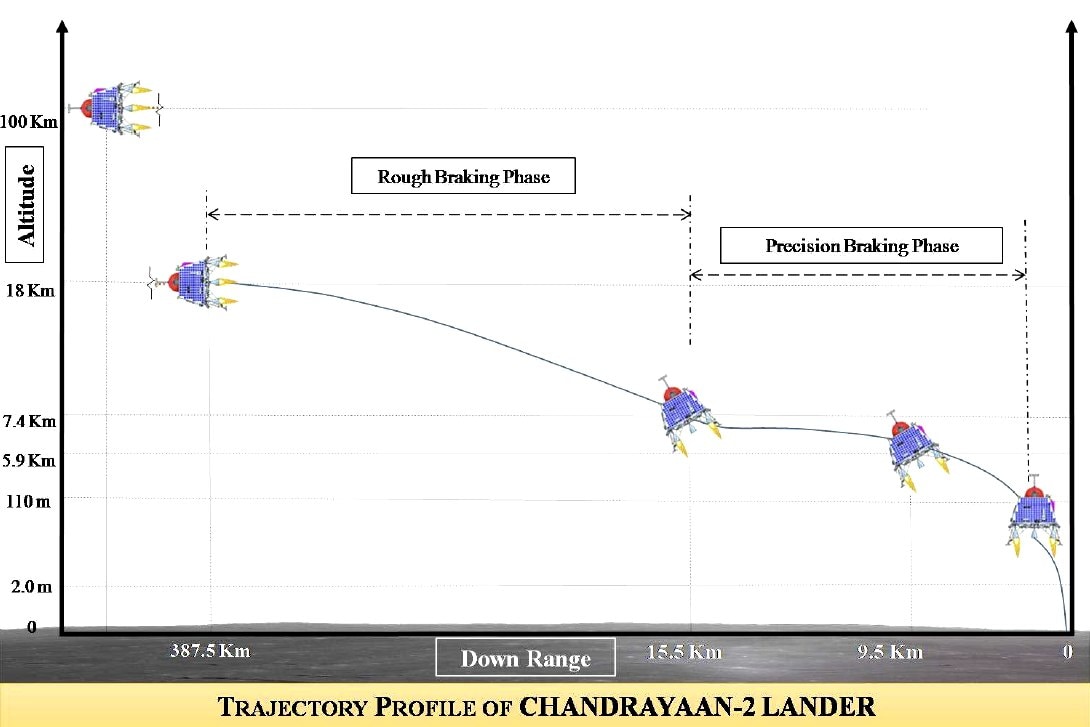 In the final minute before Vikram's touchdown, ISRO was to take a decision on whether to go through with the landing as planned or to stall and make adjustments. In reality, it never got to that. Communications went kaput 2 km off the ground, leaving ISRO blind to what happened next, and for plenty to go wrong from an unexpected, speedy fall.

The Beresheet mission was Israel's first, and the world's first private mission, to attempt a landing on the moon. Seconds before touchdown, a failed sensor caused the spacecraft to incorrectly measure inertia, leading to complications and the Beresheet lander crashing into the moon's surface.

"In the case of Chandrayaan 2, we know the lander has been located, and teams at ISRO are trying to make contact," said Nekkanti said. "We can speculate at this junction that if the impact has not damaged the power and communication systems, there is still a chance to make contact with the lander."

Also read: Chandrayaan 2 landing glitch isn't a setback, it's a reminder that space exploration is hard