Samsung Gear Sport review: A smartwatch to go for if you are not invested in the Apple ecosystem

If you aren’t an Apple user but want a good looking fitness companion gadget, the Samsung Gear Sport is definitely something you should consider. Smartwatch sales have been on the rise, with 2018 estimated to be selling around 141 million units globally.

But when it comes to top sellers, the Apple Watch has been consistently topping the charts. In fact, reports state that it sold more watches than Rolex, Omega and Swatch combined in the last quarter. That is no mean feat. In the Android Wear space, we haven’t seen any brand having as strong a hold over the smartwatch market. But Apple’s smartphone rival, Samsung has been consistently releasing smartwatches and the last couple of generations it has moved away from Android Wear, I mean Wear OS, and is releasing smartwatches with its homegrown Tizen OS. 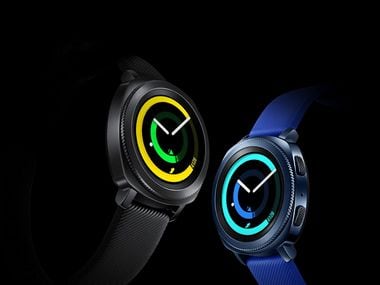 The Samsung Gear Sport represents the second generation of Tizen watches, which was started by the Samsung Gear S3 last year. The Samsung Gear Sport priced at Rs 22,990, provides a good alternative to the Apple Watch Series 3 or even any other Android Wear watch at the moment. The design is great, but the OS support has its limits due to the fact that it uses Tizen OS. If you aren’t an Apple user but want a good looking fitness companion gadget, the Gear Sport is definitely something you should consider.

Samsung has done a good job with the design of the Gear Sport. For starters, there is no flat-tyre aesthetic and you get the complete round watch display which is pleasant to look at. It measures 1.2-inches and has a 360 x 360-pixel display. This comes with Corning Gorilla Glass 3 protection, so you don’t have to bother with scratches destroying the surface of the display.

I got the blue coloured strap design which is 20 mm lengthwise and looked decent on my medium sized wrists. For someone with large hands, this may look a wee bit tiny in comparison. Thanks to the use of silicone material, it is easily washable and I never felt uncomfortable or had any irritation with the fitting despite using it in sunny situations. A simple notch on the base of the straps, lets you easily detach them in case you want to change the straps. You can get any strap you want from your nearest watch shop and it does not have to be purchased from a Samsung store only.

The Gear Sport measures 42.9 mm x 44.6 mm and is 11.6 mm thick. These dimensions are smaller than those seen on the Gear S3 that was launched last year. And thanks to the 67 g with the strap, it does not feel too heavy either. The top bezel is made of shiny stainless steel which is dark blue in colour with a thick plastic base which also houses the heart rate sensor. While the bezel design seems like the kinds whose colour would come off after brushing against a rough surface, I did not face that issue in the three week period that I was testing the watch. The rotating bezel has a nice clicky feel to it and rotating it anti-clockwise will show you the notifications and clockwise rotation will bring up the apps. This a much more comfortable implementation than the tiny Apple Watch crown. The two buttons protruding out are a bit stiff but have a good feedback. The top button helps you go back whereas the bottom button brings up the apps. Another way to interact with the display is via the touch interface. It comes with the water resistance chops — up to 50 meters or 5ATM of pressure. This means you can take it along for a bath or while swimming in the pool or at sea and there won’t be any issues. For a Sports watch, that is a minimum requirement now and it’s good to see Samsung deliver.

Samsung Gear Sport is a smartwatch first and a fitness tracker later. So it houses all the basics that you would expect of a smartwatch. The 1.2-inch Super AMOLED display comes with a 360 x 360-pixel resolution. It houses a dual-core processor with 768 MB RAM and 4 GB of internal storage. Just like the Gear S3, Samsung has stuck with Tizen OS 3.0 with the Gear Sport too. And I must say, it has evolved quite well. The built-in GPS comes as a boon to people like me who do not always like to carry along the phone on their runs but want to map the route that was run. Thanks to the 4 GB storage (half of which is taken up by the software), you can store songs on the Gear Sport which you can listen to after pairing your Bluetooth headset when running.

The Samsung Gear Sport houses the Tizen 3.0 user interface. The interface seems to have been tailor-made for the rotating dial around the display of the watch. As the operating system on the watch is different from the phone you will be pairing it with, the notifications are just that. Unlike say an Apple Watch, you cannot interact with any notifications. For instance, you cannot respond to a WhatsApp message or if you have an email notification, you cannot read the content of the email but only the subject line and so on. This aspect is quite limiting and prevents the ‘smart’ aspects of the Gear Sport.

But if you are into fitness, this is a great companion. You get features to track your steps, calories, distance, floors climbed and so on. The steps tracker and the floors climbed sensor isn’t exactly accurate and you will need to take that in your stride. Even random movement of the wrist or a particularly long drive can count towards steps at times. It can track activities such as Running, Walking, Cycling and Swimming. You can change watch faces from the Samsung Gear app. But to track your activities, you will need the Samsung Health app on your device. It’s a bit of a roundabout implementation — first download Gear app, then the Samsung Health app for tracking and so on. I tested the Gear with the Apple iPhone X. With Samsung devices, since the Health app comes pre-loaded, it is a much simpler way to sync the Gear Sport to the phone. If you want to download anything from the Gear store, then you will need a Samsung login. 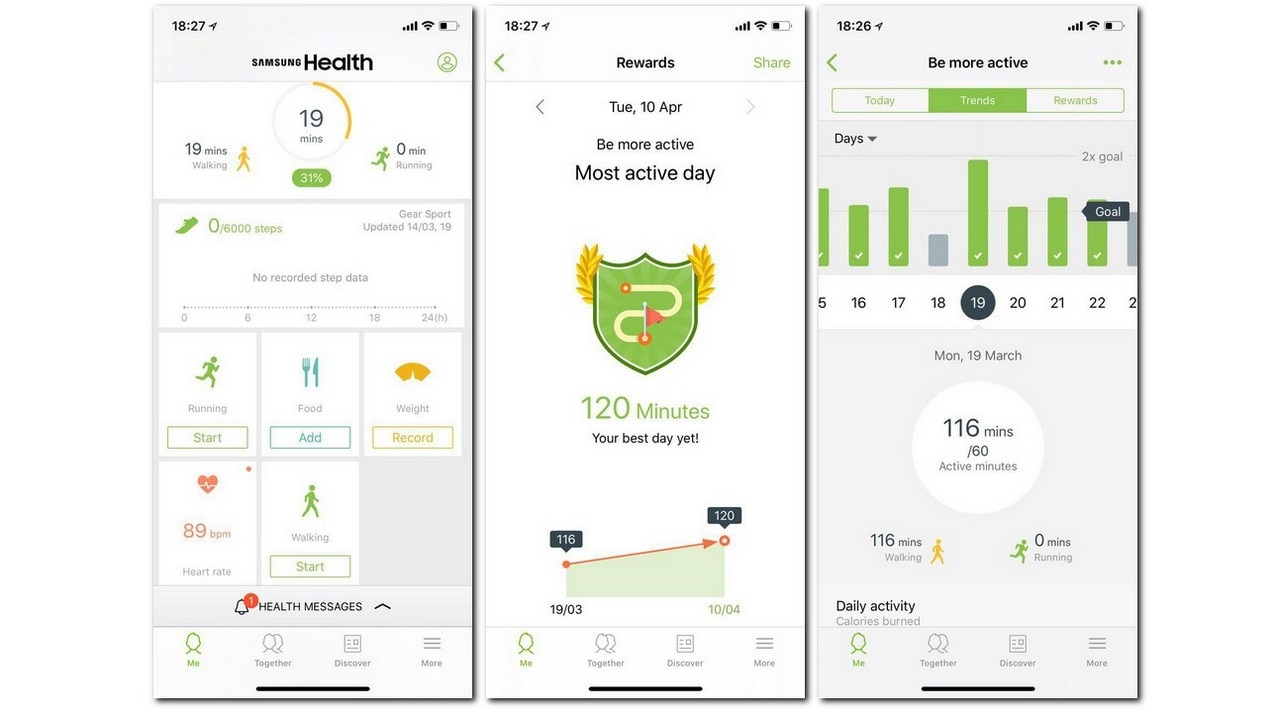 There are some neat flourishes such as prompts to do the ‘torso twist’ or get moving if you are sitting steady for a long duration. You also get motivational cheers if you are doing particularly well on that long walk. I liked the graphical way of representing the activity at a quick glance when you rotate the dial in a clockwise direction.

The first thing that annoyed me about the Samsung Gear Sport was the fact that it took a good couple of seconds before the display would turn on and show me the watch face after I went to check on the time. Sometimes it just didn't light up and needed a tap on the side to power up. This was especially annoying when compared to the Apple Watch’s responsive sensors which immediately lit up the smartwatch display if you turned your wrist to your face.

The notifications, like I said earlier, are quite limiting, in the sense that you cannot interact with them. For someone who has used the Apple Watch, this can be annoying. But due to the Tizen OS 3.0 interface, one can understand the software limitations. But if you are spending over Rs 20,000, you expect Samsung to have that aspect covered. 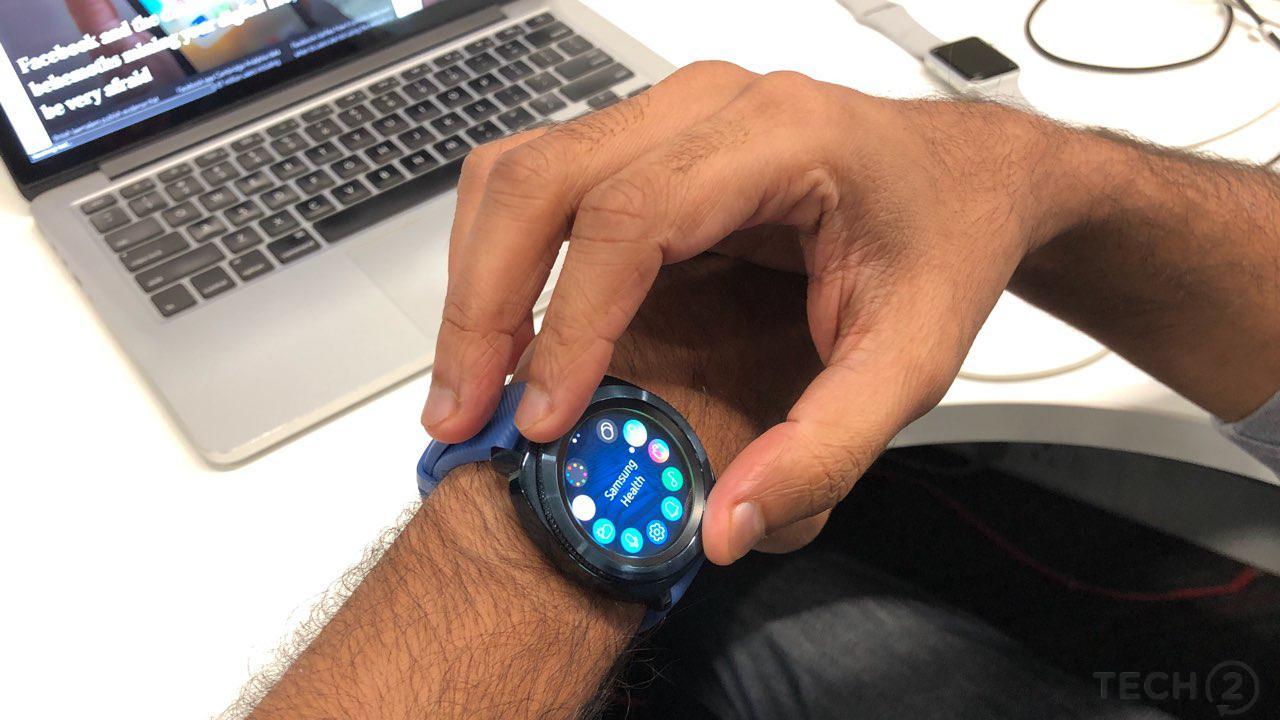 Samsung Gear Sport comes with Gear OS apps which can be controller by the metal dial. Image: tech2/Rehan Hooda

In terms of fitness tracking, the Gear Sport was fairly accurate. Of course, it does tend to record some false hand movements as steps as well. According to reports, the heart rate accuracy is in line with medical-grade heart rate equipment. GPS locking was quick and the map route was in line with the one I used to walk on.

The Samsung Health app seems a bit basic when one compares it to the Apple’s Activity app. Integrations with Google Fit or Apple Health are missing. In terms of activities, there are a bunch of them if you go to the Manage Items tab. Some of the many exercises apart from walking, running, cycling, include arm curls, bench press, canoeing, cricket and so on. You can also track your food and water and caffeine intake, but that requires you to input the data.

One thing I liked was that it automatically detects your workout, even if you haven’t explicitly selected it provided you are at it for more than 10 mins. I would always select the right option before my run, but at times I would like it that the tracker recorded a run as a run and not a walk because I forgot to activate the Running exercise mode. This is one thing I loved about the Gear Sport. Being an Apple Watch user, I am used to charging the Watch after a day and half of use. And if I go running, it has to be charged sooner. With the Gear Sport, I realised that I could go for two days without bothering with charging the device and I still had some battery life left. With the always-on display that number reduces. The 300 mAh battery is sufficient for your smartwatch needs as it ensures that the devices stays slim, while not compromising on the battery life. But unlike the Watch, the charging device for the Gear Sport is a dock which may not really be the most portable chargers around and it does take quite a while to charge. It does house the watch snugly though.

If you do not have an Apple iPhone, there is barely any incentive to go for an Apple Watch. If you are looking for an alternative to the Watch, I would suggest the Gear Sport over the many Android Wear or Wear OS sporting watches out there. Yes, there are limitations due to the Tizen OS 3.0 but that does not mar the overall experience. I would’ve liked it if I could interact with the notifications like I do on the Watch. Maybe Samsung will allow that in the next generation? Who knows. But in terms of overall usability, I was pleased and although there are shortcomings, this is the best alternative to the Apple Watch at the moment.

The Samsung Gear Sport features a 1.2-inch sAMOLED display and is powered by a 1.0GHz dual core processor and has 0.75GB of RAM with 4GB of ROM. It comes with Tizen OS and support a 300mAh battery capacity.