Galaxy M31s was supposed to resolve the problems of its predecessor, but it still loses out on performance by sticking to the same old chipset.

A great budget smartphone provided you don’t game a lot.

At Rs 20,499, the Samsung Galaxy M31 (Review) is still a solid Android smartphone that sits at the upper end of the budget smartphone segment in India. When launched early this year, it offered great value for money, given that waterdrop AMOLED display and a 64 MP camera. The only thing holding the M31 back was its plastic body that felt quite cheap, and its lacklustre gaming performance.

This also made the colourful and flashy designs of the Redmi Note 8 Pro (Review) (and more recently, the Note 9 Pro Max) attractive to buyers looking for a smartphone in the upper end of the budget segment. And then, there’s also a recent threat in the form of the OnePlus Nord, getting you crazy value for money in terms of hardware and performance at an additional Rs 5,000.

The recently-launched M31s is not a brand-new phone through and through, but works on some of its predecessor’s paint points to get you a similar phone with a couple of changes. Samsung believes the changes will convince users to choose the M31s over the Redmis and Pocos out there.

But do they add up? And how does the M31 v2.0 stack up against the competition? Let’s find out. 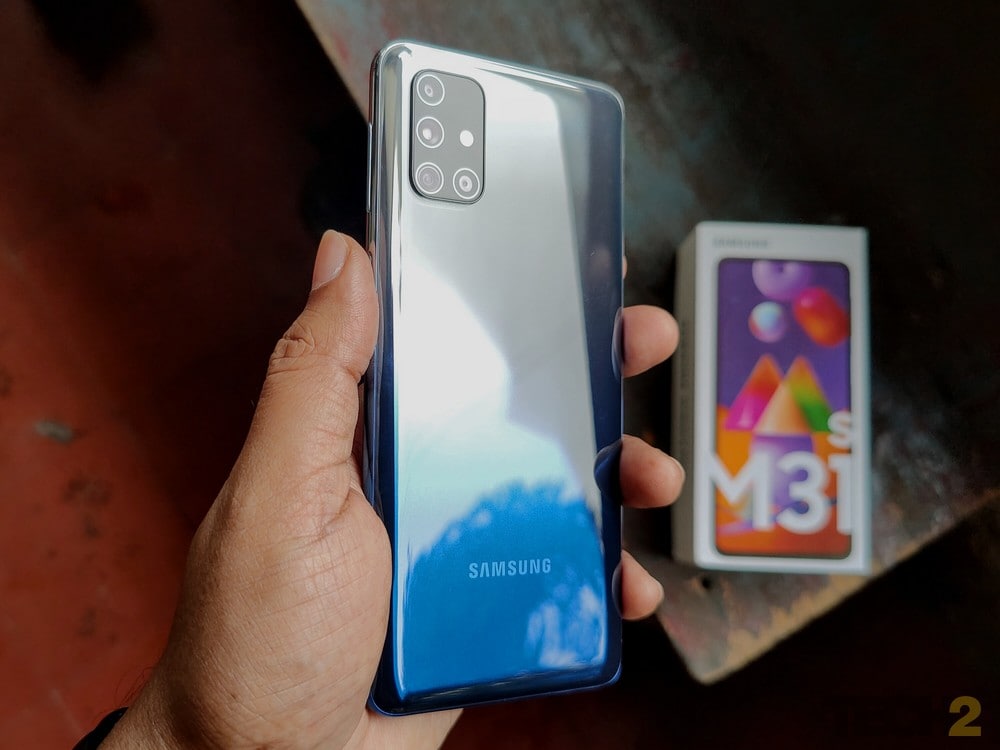 With that out of the way, let’s dive in!

Design gets an A-series upgrade The ‘glasstic’ (plastic that feels like glass) back is not bad at all, and feels quite premium compared to the M31. The ‘Mirage Blue’ dual-tone finish looks a bit flashy. The straight sides and slightly rounded corners look quite nice, as is the overall build quality. Yes, it does catch fingerprints, but you can wipe them off quite easily. On the M31s, when you do press down on the power button (properly) there's a nice satisfying 'click' to it.

I like how the power button (that also houses the fingerprint reader) is a bit hard to press down. I believe this is intentional, so that you don't end up locking the phone when you tap the power button to authenticate an app. This was a problem when I reviewed the small, but mighty Galaxy S10e more than a year ago. On the M31s, when you do press down on the power button (properly) there's a nice satisfying 'click' to it.

Most smartphone brands don't get the hole punch right. A large hole-punch cavity is often placed so deep inside the viewing area that it takes up more than twice the space the notifications bar takes up on a regular notched smartphone. Samsung does a really good job by keeping the camera unit (or the cavity) small, and it sits just 3-4mm from the display’s top bezel. The result? It does not eat into the display but basically gives you more viewing space by taking up less space than a regular water drop notch would. Samsung does a really good job by keeping the camera unit (or the cavity) small. Image: Tech2/Sheldon Pinto

Super AMOLED panels are known for their deep blacks. The panel on this phone does not disappoint, even if it’s not comparable to the good stuff you get in the mid-range with the A series. Some may prefer the default ‘Vivid’ colour mode, but I felt that it was a bit too saturated, with reds looking borderline orange. After setting it to ‘Natural’, the colours looked spot-on and the deep blacks really made for an enjoyable video streaming experience compared to regular LCD panels. Brightness was not a problem either, as content was legible in direct sunlight. 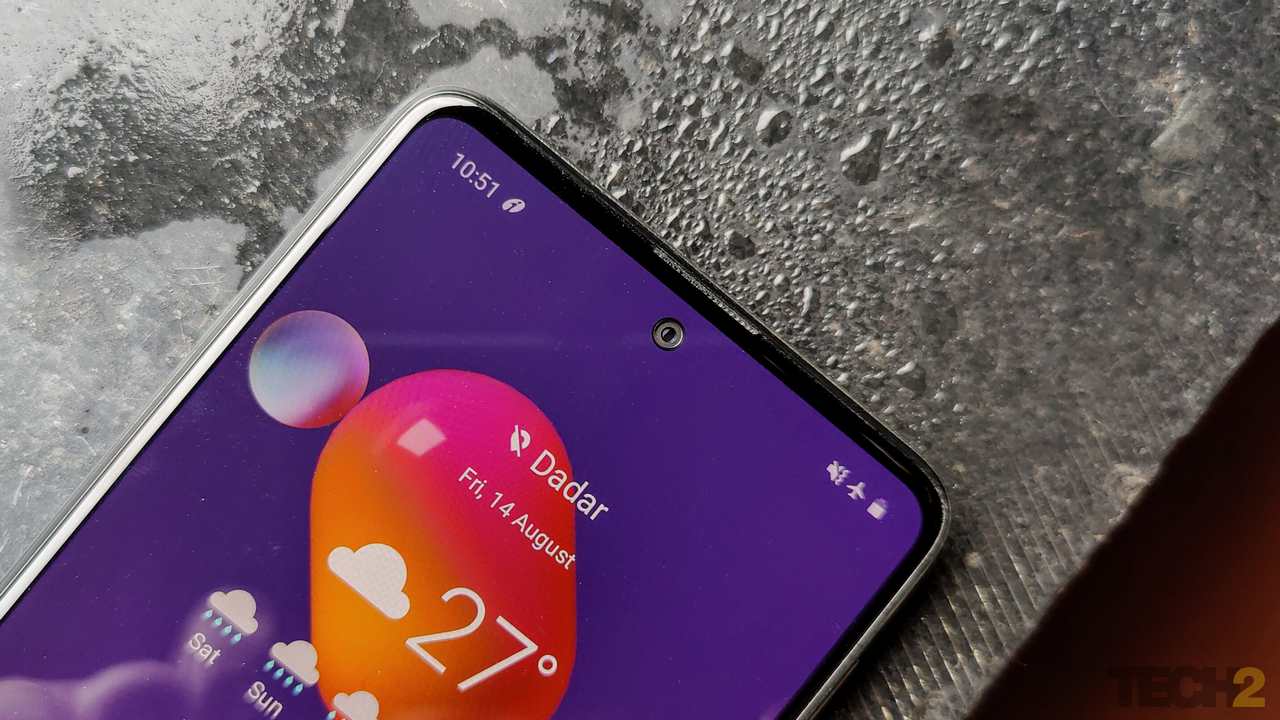 Indeed, the display is worth the extra money over the more affordable LCD alternatives from Chinese smartphone brands.

One UI pulls off a balancing act

One UI is the is actually the star of the show, and holds everything together.

Given the Exynos 9611 chipset inside, the M31s does not feel as snappy as I would like. But things are still smooth enough, and I saw no hiccups in day-to-day use save for some minor stuttering when juggling between third party apps. 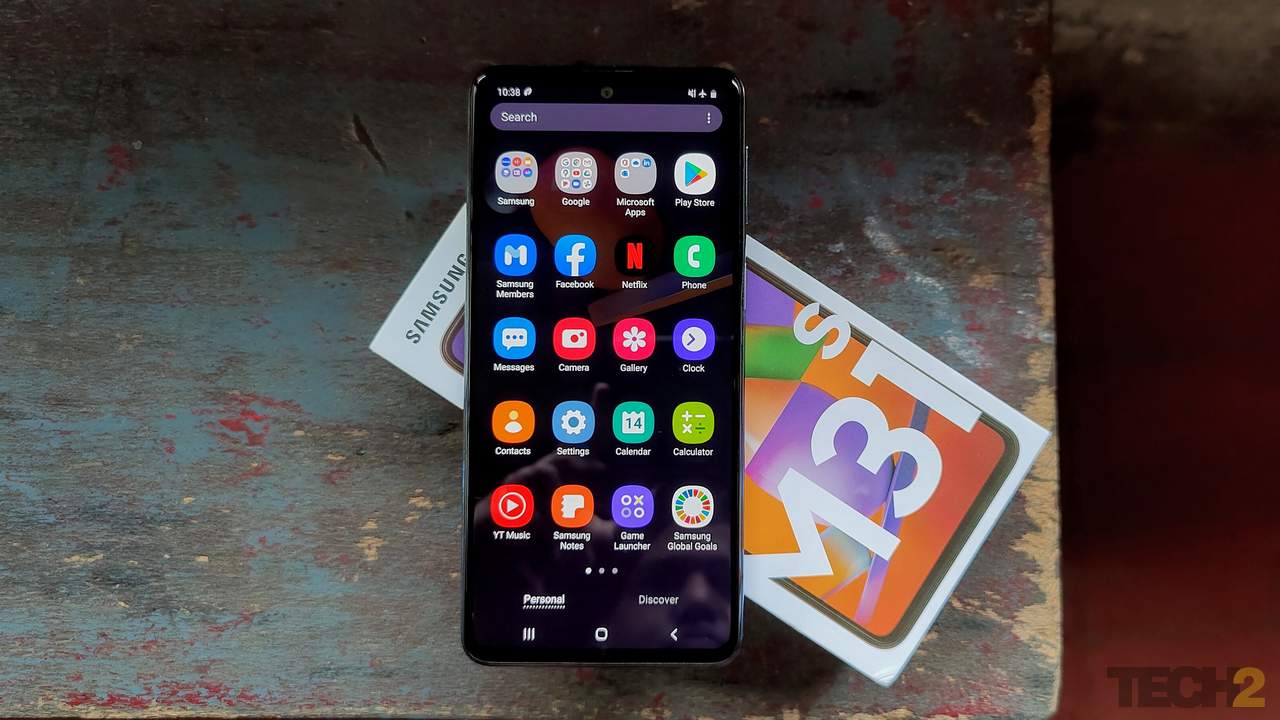 Given the Exynos 9611 chipset inside, the M31s does not feel as snappy as I would like. Image: Tech2/Sheldon Pinto

One UI in itself is well-designed, with big icons and an emphasis on one-handed use, where all the UX elements (in native apps) are brought down to the bottom half of the display. Add that AMOLED display to the mix and you also get features like an always-on display, which -- given the phone's larger than usual battery -- won’t even affect battery life.

If you aren't a fan of Xiaomi's MIUI, then you should give One UI a try, it is indeed a better, ad-free take on custom Android skins.

Camera quality is quite good The 64 MP Sony sensor gets the job done with warm colour tones and a sufficient level of detail whether it’s daylight or low light. In dim lighting, the noise creeps up a bit, but is well under control even in the darker scenes. Impressive.

Switch to night mode and you may be a bit disappointed. The image quality is average, with some aggressive noise reduction that leads to the lack of detail in textures like leaves, walls etc. This happens especially when there’s little to no light in the scene, like the ones shown below.

The bigger problem is that the Night mode literally crops off a massive part of the scene to what almost appears to be a 2x crop, compared to what you see in the viewfinder in Auto mode. Instead of the usual 16 MP binned output, you get a 7 MP image, which is of lower quality.

I understand that cropping the output from the sensor gets you more room for software adjustments (to compensate for hand movement). But cropping out so much is indeed taking things a bit too far.

Moreover, there's no escaping this crop factor on the primary 64 MP shooter in Night mode. Switch to the 12 MP ultra-wide camera in the same mode, and the results are not really usable and blurry at best.

The 5 MP Macro camera was impressive. It does not feature an autofocus system so you will need to hold the camera steady in the sweet spot, which is 4cm - 5cm from your subject. The photos are a bit soft, yet the images do pack in plenty of detail like the ridges of the snail’s shell as you can see in the above image.

Selfies shot using the 32 MP camera come out quite nice and have good dynamic range, but are slightly oversaturated. It delivers slightly blurry photos in dim light, but there is a ‘Night’ mode available that makes up for it.

Video recording at 4K, 1080p and 720p is surprisingly available on both front and rear cameras, but both are also capped at 30 fps. Stabilisation is really good, and so is the framerate that remains steady. Footage in low light is also not bad, it’s just that the camera takes an extra second to lock focus on the scene or object.

The 6000 mAh battery lasts really long because of the chipset’s stingy power usage and with casual non-gaming use, will easily last you two days. The 25W charger is fast and gets you up and running in about an hour and half, which is not bad given the battery’s capacity. 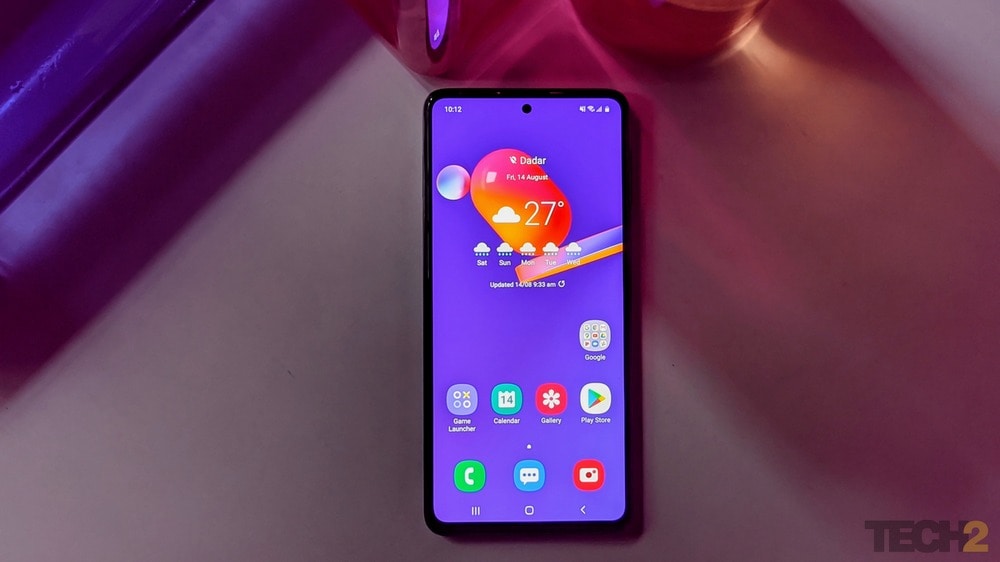 Exynos 9611 may not affect Samsung’s well-optimised OneUI, but it does affect gaming performance. Image: Tech2/Sheldon Pinto

The Exynos 9611 chipset is not a power hog. This is just about right for a phone that’s meant to entertain you, be it casual gaming or streaming movies on that sAMOLED display.

This chipset may not affect Samsung’s well-optimised OneUI, but it does affect gaming performance. The 9611 can run most games best at low-medium graphics settings, and things start getting choppy at high graphics settings. The graphics heavy MudRunner was a stuttery experience.

I tried out Asphalt 9: Legends, Call of Duty: Mobile, PUBG: Mobile and the mobile version of MudRunner. After trying these games out, it was clear that the M31s is not meant for gaming. The phone does heat up with medium or high graphics settings, and takes a while to simmer down as well. This is a problem, and after about 45 minutes of gaming, you will experience noticeable lag, slow loading of characters in the game etc.

Sadly, this was a problem with the M31 as well, and it seems like Samsung missed an opportunity by retaining the same chipset, while building on charging speeds and a better design. Qualcomm’s counterparts are better on this front, and that obviously makes the Poco X2 (730G) a better choice if you have gaming on your mind. Audio quality through the speakers was quite loud, clear and enough to fill a small room. The 3.5mm headphone jack? Please…

Should you buy a Samsung Galaxy M31s?

Unless you’d prefer to avoid a Chinese product, you really cannot ignore the better build quality of the Xiaomi Redmi Note 9 Pro Max (Rs 16,999) and the Poco X2 (Rs 17,499), both of which feel snappier in daily usage, offer better cameras with more detail and get you great gaming performance as well.

They are priced a bit lower but miss out on that lovely AMOLED display, a 6000mAh battery and the interface is known to be spammy. With that in perspective, Samsung's pricing for the M31s is justified.

If you own a Galaxy M31, there’s really no need to upgrade, as the bits that matter mostly remain the same. 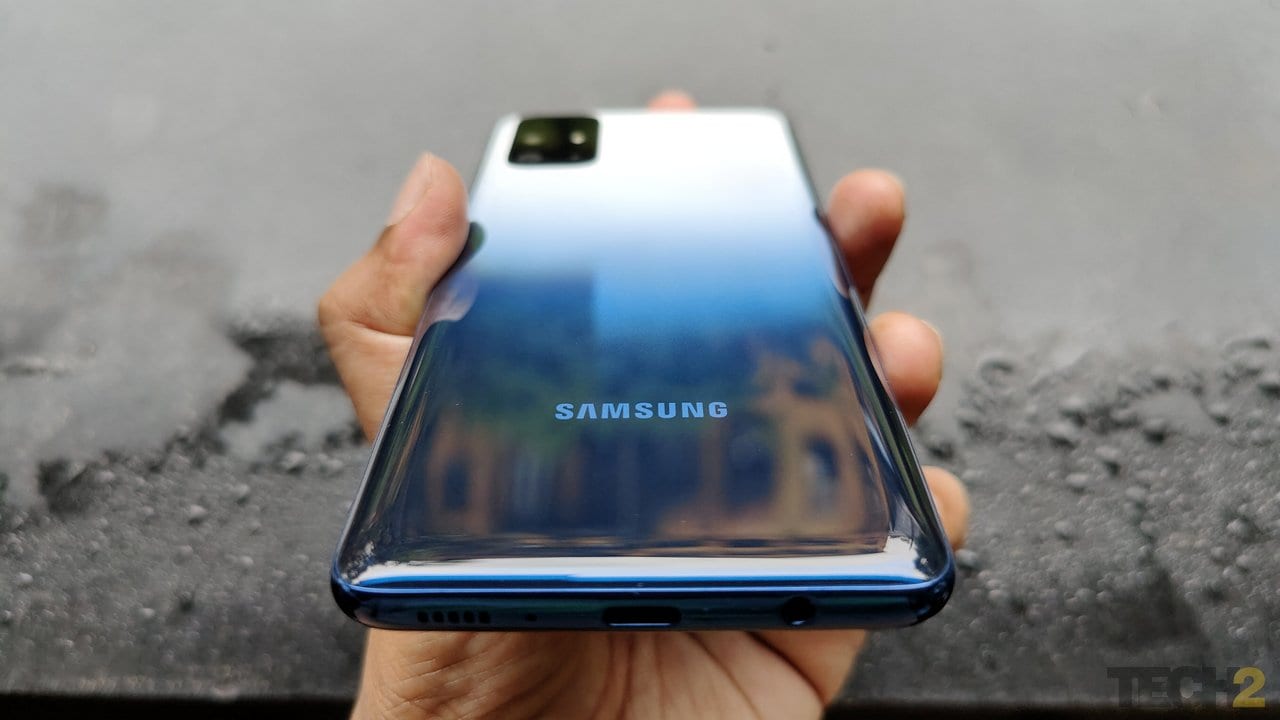 If you own a Galaxy M31, there’s really no need to upgrade, as the bits that matter mostly remain the same. Image: Tech2/ Sheldon Pinto

My only complaint about this phone is its gaming performance in comparison to the competition, in and below this price range. Everything else that's attached to this phone serves a purpose, whether it’s the AMOLED display, the massive battery or that 64 MP camera -- all of which deliver.

It sits just below the mid-range at Rs 19,499, but gets you the right combination of battery-friendly performance with a dash of style and the convenience and comfort of an AMOLED display. Just don’t game on it.