Samsung Galaxy S10e review: A small and practical flagship that’s a delight to use

The Samsung Galaxy S10e may not be the best Android smartphone, but it hits the sweet spot like no other.

Despite minor shortcomings, it beats the Pixel 3 as an overall package.

But the Galaxy S10e is no watered-down ‘mini’ variant of the S10. You get the same performance, RAM and storage that are as good as the bigger Galaxy S10, but in a smaller, hand-friendly package.

It’s less of a ‘mini’ and more of ‘compact’ that Sony is used to delivering with their flagship Xperia series.

The S10e looks classier than the Pixel 3 (which features last year’s Qualcomm 845 chipset) and it also shoots better video. The only thing the Pixel 3 does better than the Galaxy s10e is photos and it shoots some really good looking Portraits, that no Android smartphone is able to match with its machine learning bits.

But the S10e comes close and does offer a much better video which easily makes this the better buy, or as I would put it, the best S10 to buy this year.

The Samsung Galaxy S10e is hands-down the best-looking compact Android smartphone I have seen till date.

The glass and metal construction in the Prism White colour looks gorgeous and feels premium. 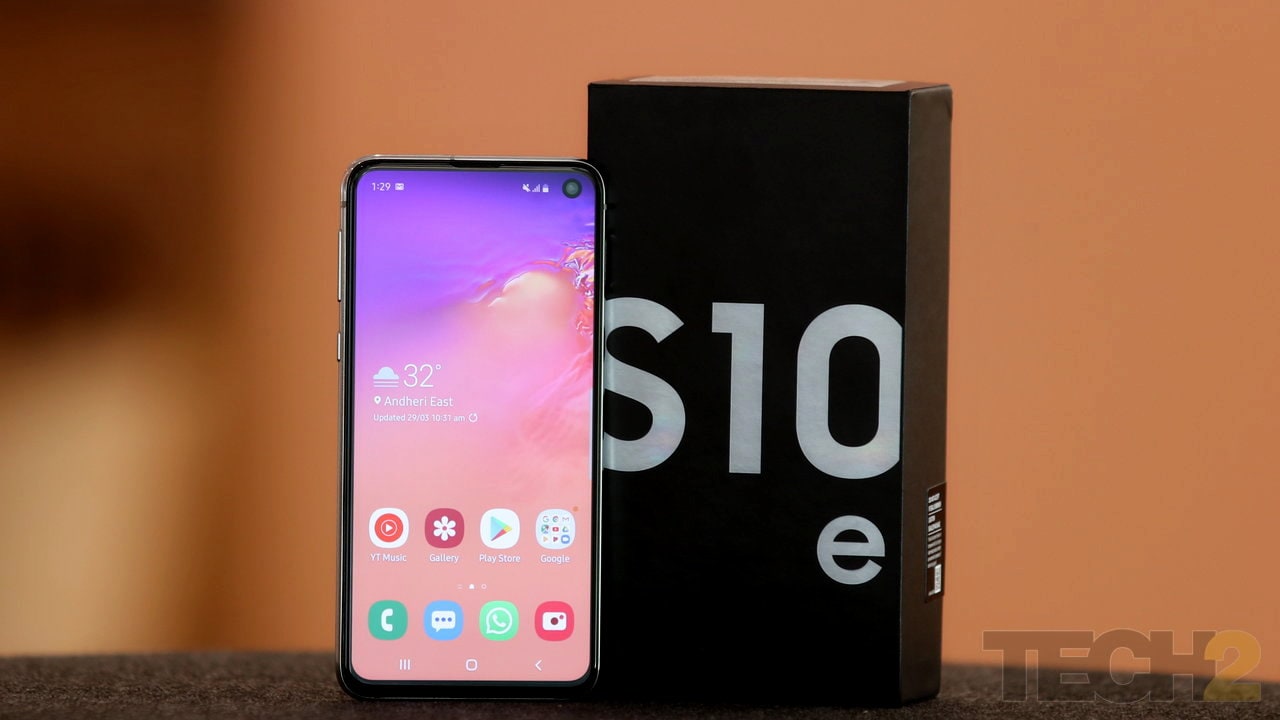 It’s not fancy or loud, but just too damn classy. Obviously, its size is the highlight, which for once, allows for one-handed usage of an Android smartphone. The Pixel 3 comes close, but it is taller which still makes it a two-handed device. 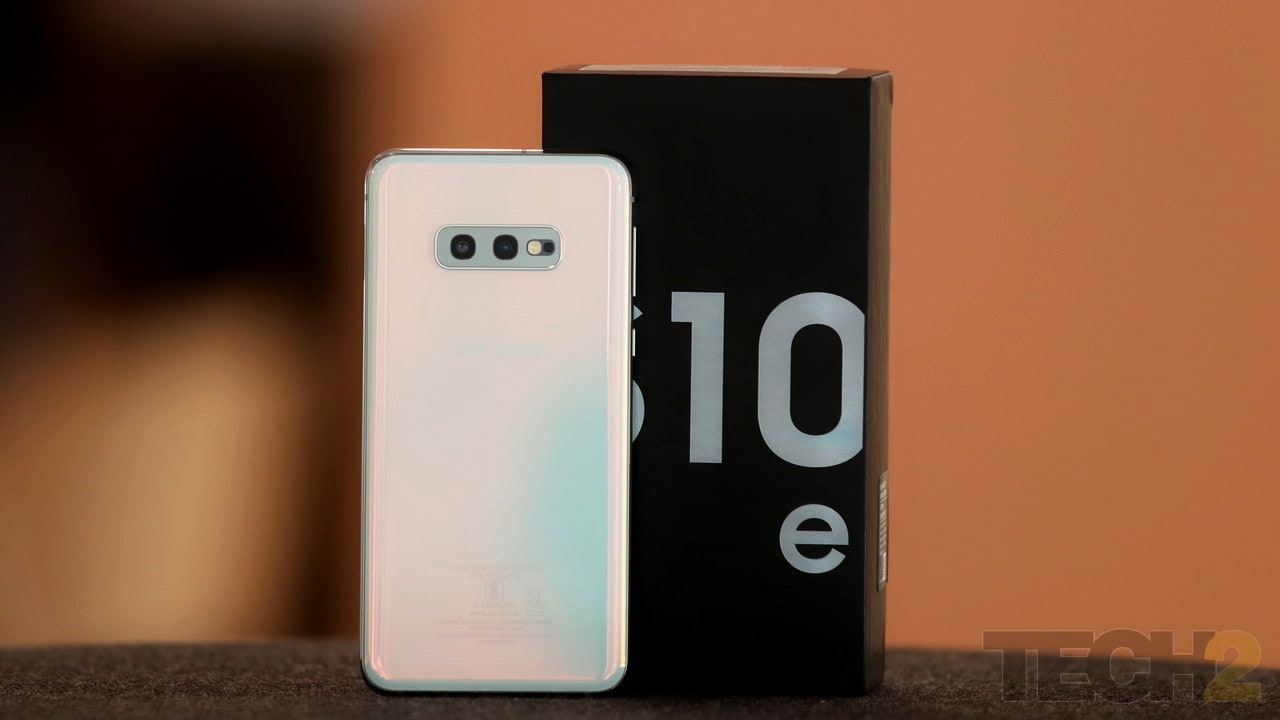 This baby Galaxy also comes with an IP 68 rating, features dual speakers, a 3,100 mAh battery and a 3.5 mm headphone jack, all in that tiny package!

The only other smartphone that comes close to this one-handed Android experience is Google's Pixel 3. But the bezels on the Pixel 3 make it look far more outdated than the Galaxy’s sleek and modern look. 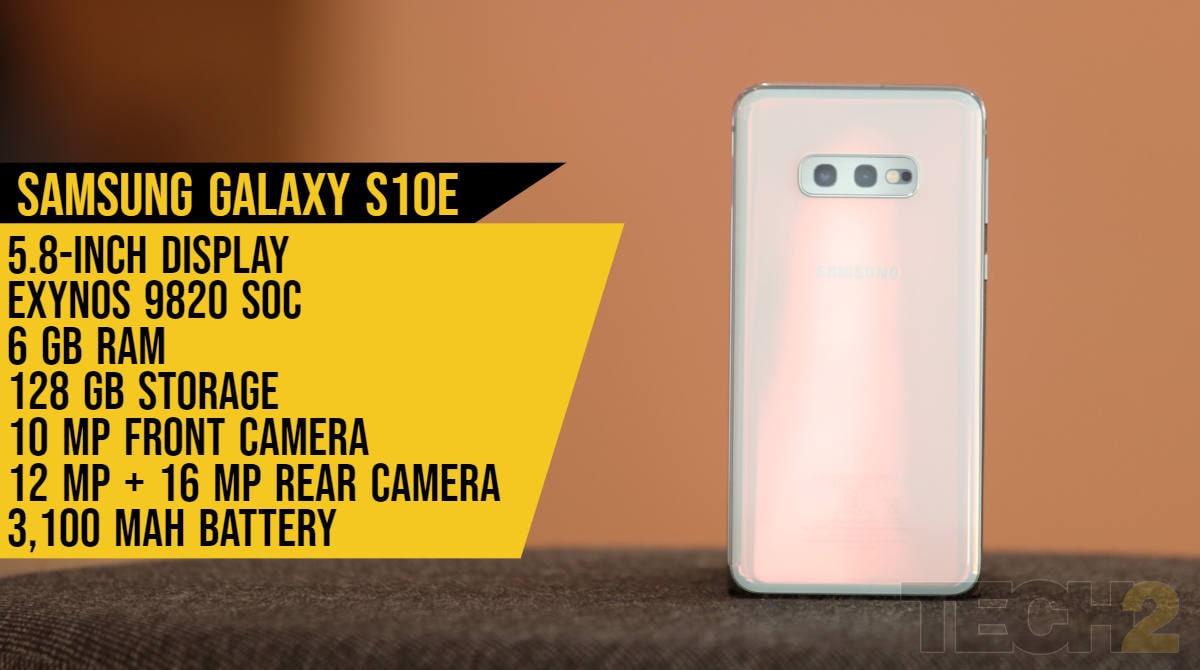 A quick look at the specifications of the Samsung Galaxy S10e.

The Galaxy S10e’s AMOLED 5.8-inch display is a flat one and does not curve around the edges like on the S10 or the S10+ models.

The flat display also makes it more comfortable to read the text (does not wrap around the edges), watch movies and is less distracting overall as compared to the S10 and the S10+.

Honestly, I don’t know why Samsung even makes those curved edge displays anymore, because they don’t even curve half-way around the edges as the Galaxy Note Edge did. And the Note Edge used the curved edge for displaying notifications. The Dynamic AMOLED Infinity - O display also packs in the same HDR10+ certification as the Galaxy S10 and S10+.

Dynamic AMOLED basically delivers richer colours and very high contrast ratios getting you the darkest blacks (a theoretical contrast ratio 2,000,000:1) possible on a mobile device. And this comes of use when watching HDR content on video streaming services like Netflix. 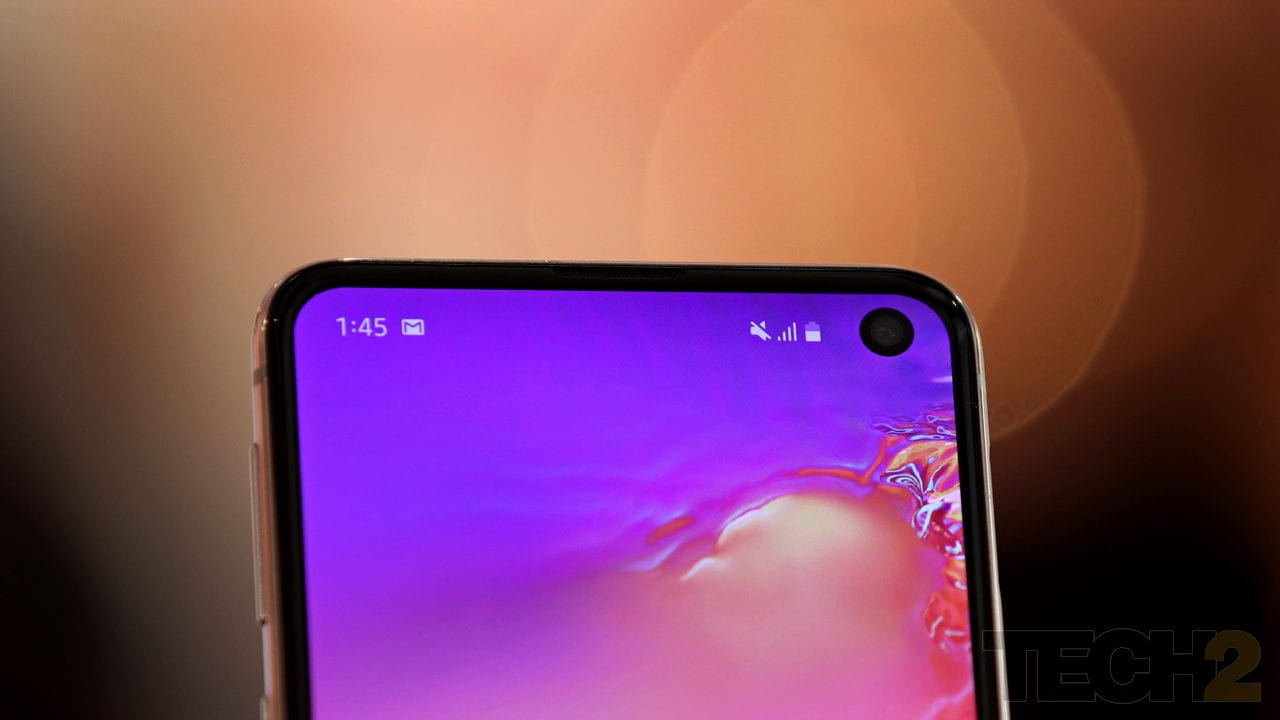 The 'O' in the Infinity comes from the hole-punch cutout at the top right corner of the display. Image: Tech2/Omkar Patne

It does not get in your way like an iPhone X’s gigantic notch and unlike the S10+’s dual camera cutout, it’s quite small so you won’t notice it at all.

Like the S10 and the S10+, the S10e is quite possibly the best AMOLED display you can get on an Android smartphone and easily beats the one on the Pixel 3.

Everything within your thumb’s reach

One UI is great and has already been optimised to run on big (6.4-inch) displays, so it feels absolutely delightful to use on a much smaller display of the S10e.

Everything is within your thumb’s reach and the UI somehow feels faster and more fluid than the Galaxy S10+ (possibly because of the FHD+ display). One UI brings all the UI elements within your thumbs reach and it's even better on the S10e's smaller display.

It’s got a dark mode that can be scheduled to turn on and off or can be set to follow sunrise and sunset.

Against the Google Pixel 3, I’d actually pick One UI because it’s far more customisable. But not for timely software updates.

When it comes to performance, my biggest gripe with the Galaxy S10+ was its in-display ultrasonic fingerprint reader, which didn’t work as expected. On the S10e, the capacitive fingerprint reader (which doubles up as the power button) is a much-welcomed change and it works flawlessly.

Gaming performance on the Samsung Galaxy S10e is top-notch and the phone does not heat up either.

With the Exynos 9820 SoC and an FHD+ resolution display, there are fewer pixels to push, which brings a noticeable boost in gaming performance as compared to the bigger S10+. There is no lag and no stuttering and whole UI feels quite fluid.

Audio quality is pretty loud and quite clear, but it still doesn’t match up to the new iPhones in terms of bass delivery. The S10e still has one of the best speakers you can get on an Android smartphone.

Oh, and did I mention that there is a headphone jack on the S10e? Something a few Android devices and no iOS device has on offer in the premium smartphone range. Courage!

Camera quality is pretty good but somehow cannot match the Google Pixel 3 when it comes to the finer details in photos — the Pixel 3 has set a benchmark on that front, which few smartphones can match. The S10e still showcases a better dynamic range than the Pixel 3 even though its photos look abnormally brighter as less contrasted.

In low light there’s noise and the details also take a hit. But these photos are far better than what you will get on any smartphone in this price range.

The ultra-wide angle lens despite not featuring autofocus is useful, but you have to keep your subjects away from the edges as there’s noticeable lens barrel distortion.

You can check out the camera samples from the Samsung Galaxy S10e in the carousel below or simply click here to check out the album on Flickr. Samsung has a software fix to kill the flex, but they look a bit abnormal considering that just the edges are straightened out and not the whole image.

Selfies on the S10e come out quite detailed and most would be satisfied by them, provided they have never used a Pixel 3. The Samsung Galaxy S10e offer just two cameras at the back, unlike its bigger siblings. Image: Tech2/Omkar Patne

Video quality is class-leading and the best you can get from an Android smartphone in this price range. In low light or dim light, it all depends on the resolution and frame rate you choose. I would recommend sticking to FHD 30 fps as the output features less noise in low light and also lets you shoot HDR10+ video, which looks quite good on the smartphone’s display. You will have to export these into regular HDR10 video to view them on other platforms or devices.

Super Slow Motion at 960 fps is fantastic provided the lighting conditions are right and so is the Super Steady mode which offers the best in class stabilisation and something that no other smartphone currently offers.

Google only sent us a Pixel 3 XL unit for review so I really cannot comment on which of these two hand-sized premium flagships is better.

But Samsung S10e does deliver around 6 hours of screen on time, which is pretty darn good for a small smartphone with a 3,100 mAh battery.

And this is using the optimised mode which does not throttle the processor and the display’s brightness, and with Android’s Adaptive battery setting switched on. Battery life is pretty good with about 6 hours of screen on time.

On a heavy work day with plenty of calls, the S10e almost gets through with 15 percent juice left.

On weekends, where I rarely pick up calls but focus more on apps, games and a couple of photos, the phone easily gets me through a day with about 20 percent left to spare.

The in-box 10 W adaptive charger works well for this smaller battery but still is not the fastest one around.

If you are coming from a large-screen smartphone, you will be a bit disappointed, but the phone is still quite usable and you have to give it a week before the adaptive battery will start to figure out your usage patterns. Indeed, there’s only so much you can squeeze into a smartphone this tiny.

The Samsung Galaxy S10e falls short on the camera just like its eldest sibling, the Galaxy S10+.

But it’s pretty darn good at being a compact flagship that allows for one-handed use.

If you are in the market for a premium Android smartphone, you literally have two options to choose from, the Galaxy S10e and the Pixel 3. I would pick the Galaxy S10e over the Pixel 3. Image: Tech2/Omkar Patne

While the Pixel 3 brings a stock Android experience and almost DSLR-like photography, the Galaxy S10e makes up for everything else.

From allowing you to select navigation keys or gestures you want (Pixel does not allow that) to the way you want them placed (nope not this either) to a system-wide dark mode (nope) that is again customisable and even letting you choose your own font (not here yet)! And then there’s that Super Steady video that will amaze anyone.

And it’s all available in a lovable, one-handed, bezel-less design that even includes a headphone jack with more RAM and more storage (6GB + 128 GB) than the competiton. Why would I buy anything else at Rs 55,900?