Samsung Galaxy A6 Plus Review: Overpriced, but display and battery life rock!

Samsung Galaxy A6 Plus is an overpriced phone which offers an amazing display and little else. Samsung Galaxy A6 Plus is an overpriced phone which offers an amazing display and little else.

Samsung's Galaxy A series phones are mid-range offerings that strip out the fancier features found on the S-series flagships. With these phones, Samsung is attempting to offer a value-for-money proposition, but one that has to compete with the likes of Huawei and OnePlus. The Galaxy A6 Plus, which features Samsung's signature OLED 'Infinity Display', was launched alongside the Galaxy A6 and J6. At Rs 23,990, the phone certainly has its work cut out for it. Does this traditionally overpriced Samsung mid-ranger have what it takes to stay relevant? That's what I aim to find out. For my testing, I received a black Samsung Galaxy A6 Plus with 4 GB RAM and 64 GB storage. 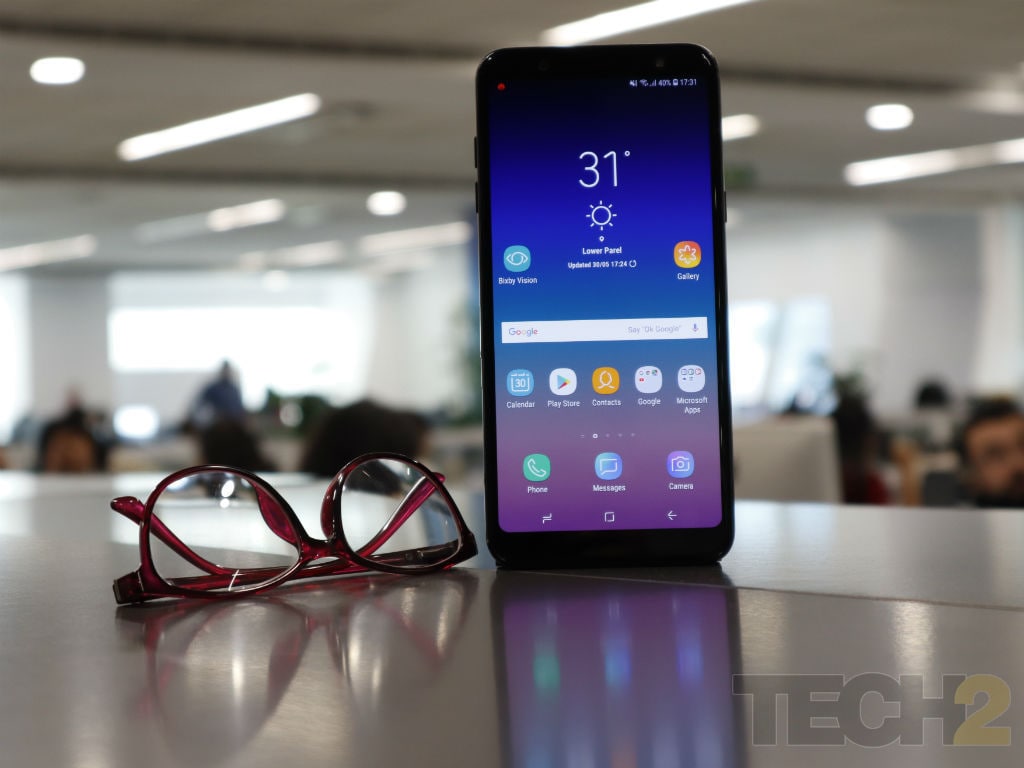 Samsung Galaxy A6 Plus. Tech2/Amrita Rajput.

At first glance, the A6 Plus certainly seems to have it all. With an impeccable camera for daylight pictures, a sturdy yet basic design, smooth software and a fantastic OLED display, it might actually make the cut.

The first thing to note is that Samsung's flagships are the only ones that possess a real infinity display. The one on the A6, while it's called an Infinity Display, doesn't curve around the edges the way the displays on Samsung's best do.

The phone not only has a large display, it is also large in size overall. It's also heavy (191 grams). The weight, size and metal finish means that the phone tended to slip out of my hands with relative ease. If you have small hands, getting used to the size can be quite a task and operating something as simple as the volume controls can be a bit hard. 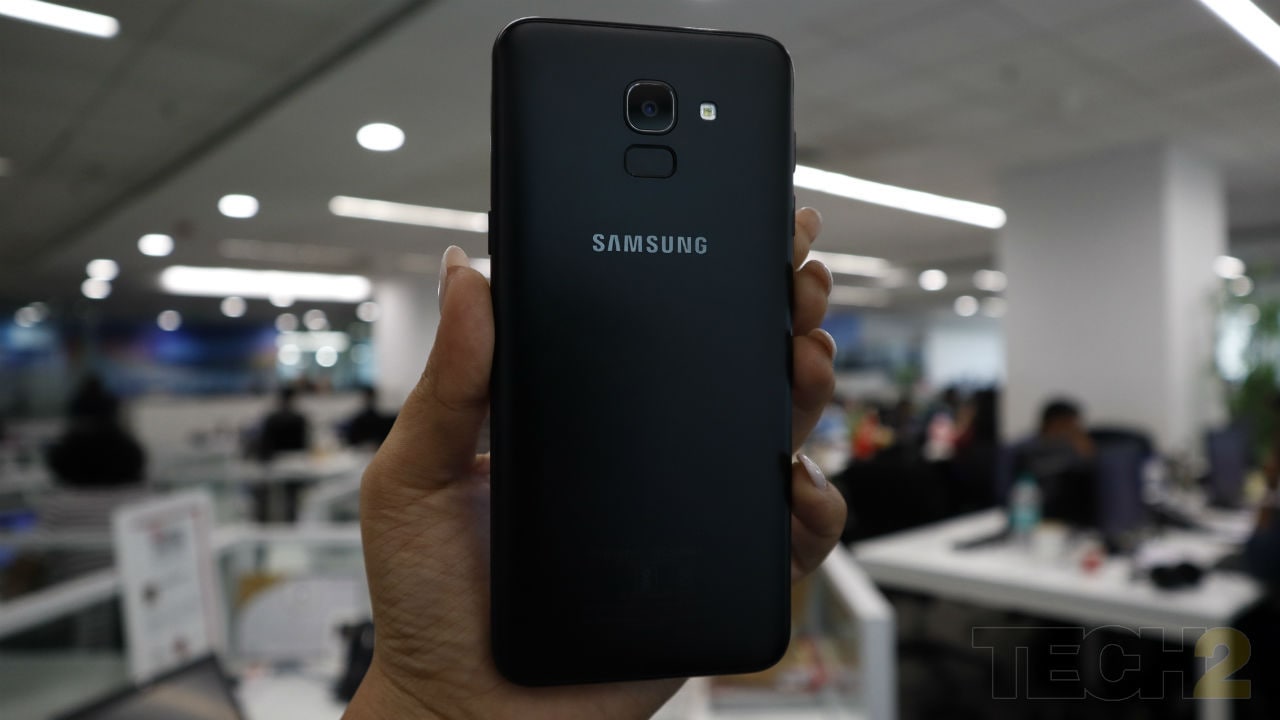 The metallic back of the phone is a smudge magnet. Tech2/Amrita Rajput

Apart from the display, the design is pretty much mundane. The metallic back of the phone is a smudge magnet (you may need to wipe the smudges multiple times so that it comes off). It has a dual camera setup with a flash set perfectly at the rear end of the phone with a fingerprint sensor below it. The only speaker on the phone sits above the power button on the right of the phone. Unusual placement indeed, but normal for Samsung's A series phones. It has two ports—a charging port and a 3.5mm jack for earphones. Tech2/Shomik Sen Bhattacharjee.

The four edges of the handset are curved with visible antenna bands on both sides of the phone, which complements the black handset.

On top of the display is the front-facing camera with a flash and a proximity sensor. 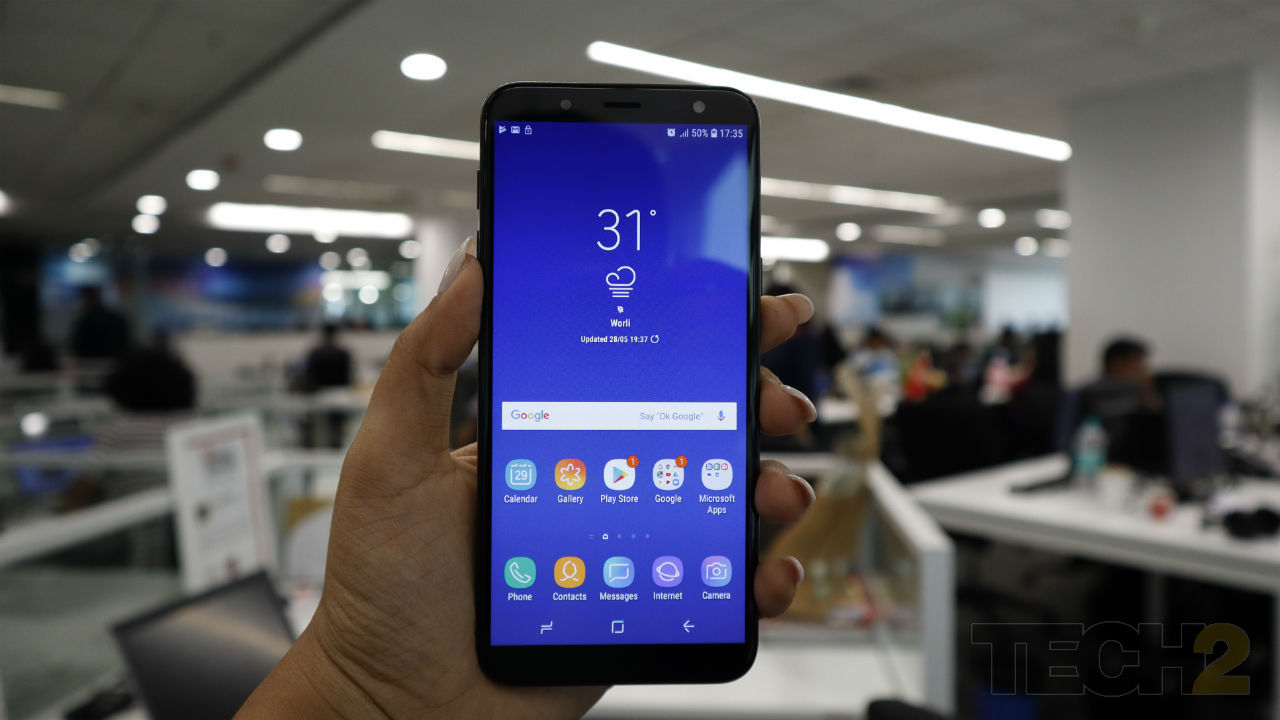 Samsung Galaxy A6 Plus has an OLED panel which is battery efficient and makes viewing a breeze. Tech2/Amrita Rajput

The phone has a 6-inch FHD+ super AMOLED display in a tall 18.5:9 aspect ratio. Unlike phones with an LCD display, the OLED display has a brightness which is soothing. Display colours are rich and not very bright, which works perfectly. It was sharp and more clear than other displays I'm used to.

I did notice punchy red and orange colours while watching videos. However, the red seemed more like fluorescent orange, which is a common problem with Samsung's cheaper OLED panels. Regardless of the mild colour issues, the experience while watching videos is immersive and deep. Viewing might feel seamless but the bezels are conspicuously present. Samsung.

Samsung's treatment of Android on its phone is visibly step-motherly. It has so much of its own that one really wonders whether they are using Android or some Samsung Experience.

One interesting feature in the software was the ‘Chat Over Video’ feature where you can chat and watch videos simultaneously. It reminds me of WhatsApp’s PIP mode. It is actually quite convenient to switch over this mode while you are watching videos since the WhatsApp chats pop as you can see below. On tapping the pop up, the WhatsApp chat opens but halfway so that it does not disturb your viewing experience. But typing can be a problem. The Samsung Keyboard has too many things in one place which gets problematic in this mode, but It can prove to be a life-saver if you are binge watching. Moreover, the Chat is transluscent, so you can see the video recommendations from YouTube below. Not all apps are supported in this mode, and Telegram, for example, behaves differently. 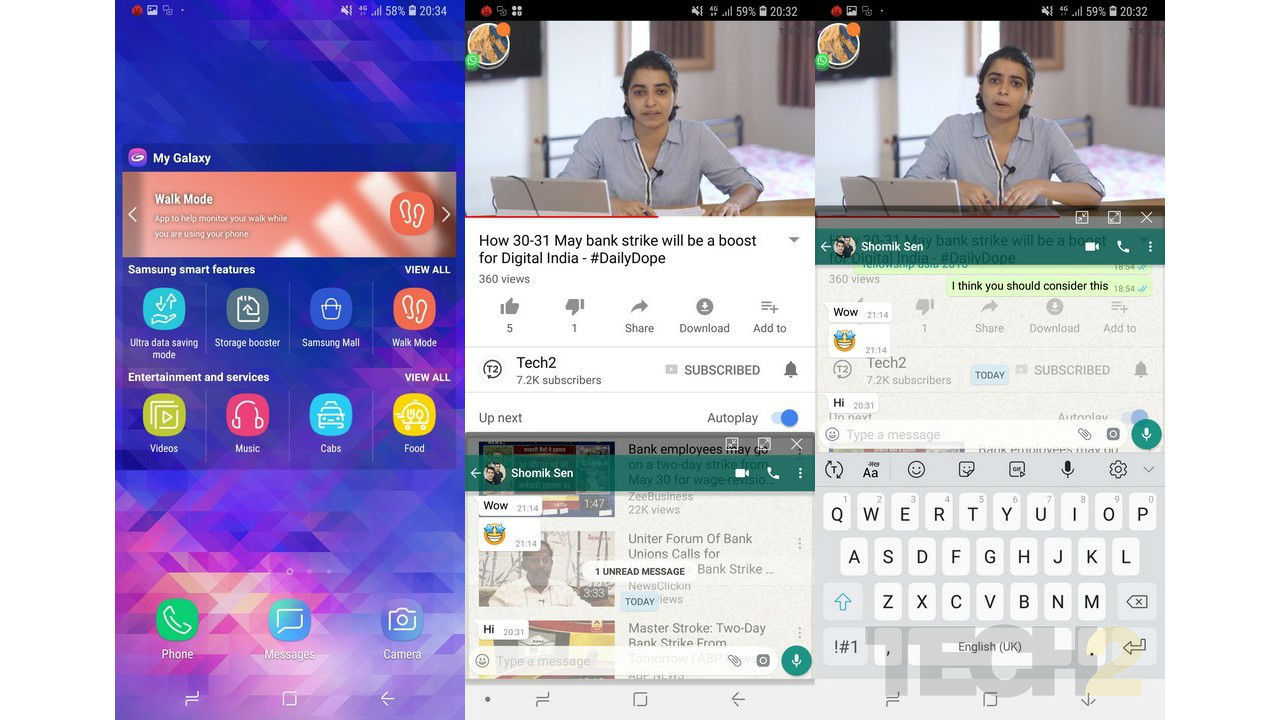 Samsung has a couple of new smart features of its own and a Chat Over Video feature where you can WhatsApp chat as well as watch videos.

Meanwhile, Samsung’s Bixby Vision is also included. It's an AI-powered object recognition engine that seems pretty accurate at guessing what an object is. Some of the additional features include Smart Things for connected devices, Samsung Pay for UPI payments and Samsung Mall, amongst others.

I don't think that smartphone makers like Apple and OnePlus care any longer about the placement of cameras. I can't understand how it doesn't bother their designers to see a camera jutting out the back.

Call it OCD, but I personally have a problem if a phone is not smooth and positioning a camera does play a big role in this. In Samsung A6 Plus, the camera is fitted as snugly as if it were in a mould. It is not innovative or radically different, but it's classic and fills me with a serenity that few other phones can muster. It has a dual camera setup neatly packed with an LED flash near it. Tech2/Amrita Rajput.

However, when it comes to low light, the camera fails in detailing and colours as well. Small details in the pictures, which were otherwise visible in daylight, appear blurry and with visible noise in the background. For Portrait Modes, there is a Live Focus button. The camera gives a good bokeh effect where the subject and the background can be distinguished perfectly. Additionally, it also has a Background Blur feature where you can manually adjust the blur.

In the case of front-facing camera, there is a Selfie mode also, but  I prefer the natural look. The Selfie Mode in A6 Plus is not as convincing as the auto mode. In the former, the phone does miss a margin here and there and the background is a messy blur. It makes selfies soft. Personally, it does not take photos worthy of my social media streams when in this mode. I would say the auto mode is way better.

The camera has a couple of fun stickers that you can use to add some humour to your photos.

Initially, the phone was smooth, however, over time I did face minor stutters on the phone. The Bixby laden software gets conspicuously heavy and you can feel the added strain on the device while swiping.

I played Tekken 3 and Fruit Ninja, and I experienced minor lag. In Tekken 3, it took a considerable amount of time to load and I did notice stutters the second time when I used it to play the game. I faced minor stutter with lighter games like Fruit Ninja as well.

Speaking of gaming, if you even try gaming on this phones, and it has a landscape mode display which requires both the hands to support my phone. You might need an extra pair to support it further! Adding to it was the volume button at the bottom which was an annoying hindrance while playing.

In terms of the audio experience, I must say, Samsung could have done better. It has one speaker at the top of the phone on the right-hand side corner and the lack of a second speaker is audibly driven home every time you listen to that shrill mono speaker.

In fact, the worst part is the fact that you can accidentally cover the speaker when watching videos, a mistake any regular smartphone user will make.

When it comes to unlocking the phone, the face unlock feature might take a few seconds more initially to read your face, but as you use it more, it gets better. For bespectacled people like me, removing your specs every time can get annoying, therefore, a fingerprint sensor should be your go-to unlock system.

Packed with a 3,500 mAh battery, I was left impressed with the phone's stamina. When I ran our standardised PCMark battery test, it calculated the battery life to be 12 hours. That's quite commendable.

On a usual day, I constantly check social media platforms such as Instagram and Facebook, apart from using Telegram and Slack, I also use the phone to make audio and video calls on WhatsApp for nearly an hour and watch a few videos on YouTube. By the time, I decide to hit the bed at night, I still have 33 percent battery left, which was amazing. 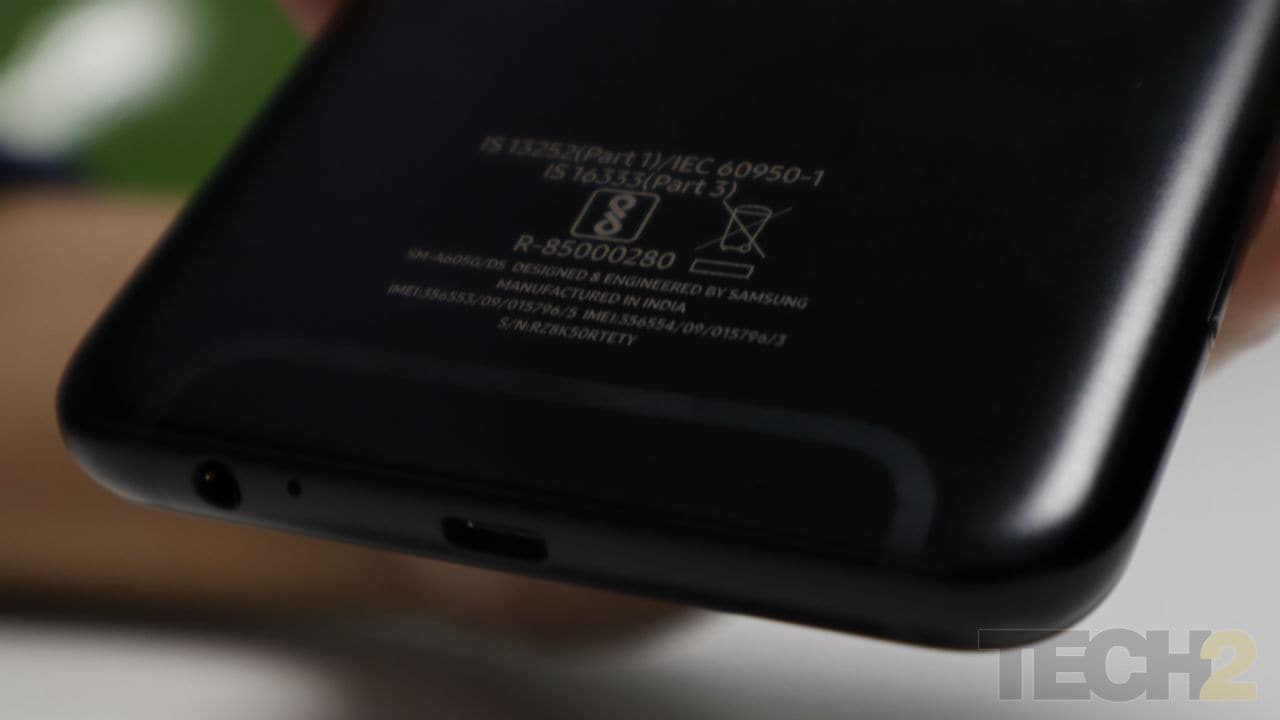 It has 3,500 mAh battery which can last you a day. Tech2/ Amrita Rajput

On other days when I binge watch on videos, which means nearly five hours of non-stop video, the battery lasted till the evening (4 percent). These days also include regular social media use, WhatsApp video and audio calls.

The Samsung A6 Plus is a good, sturdy, and a reliable phone if you want to buy a phone which remains faithful to you. The display is soothing and not harsh, thanks to the OLED display. It has everything you would want in your phone to solve your basic needs. However, the problem lies in its price which is Rs 23,999. You can get similar qualities in a Nokia 7 Plus (Rs25,999) which looks better, is more powerful, has a better battery, camera, and speakers and retails for just Rs 2,000 more on Amazon.

Other than that, you can probably wait for Xiaomi's Mi A2 which is expected to launch on 8 August in India. The Xiaomi MiA2 is slimmer, weighs less, comes with a dual camera setup and more importantly runs on stock Android. It is expected to be priced in the mid-range, eerily close to the Galaxy A6 Plus.

You can also check out Huawei's newest offering the Nova 3i that is priced at Rs 20,990. The smartphone has 4 GB RAM and a massive 128 GB internal storage, and a dual camera setup both in front and at the back.

Buy this device if you want a smartphone with an OLED display, great build quality, and a solid battery life, or if you are simply a Samsung fan and are looking for a budget device with Samsung Pay.

WhatsApp is working on a feature to let users search chats by date, feature to roll out soon in an update