It’s a brand-new Note 9 through and through, but software and performance issues leave this Note in the dust, well behind the Pro and Pro Max.

Spend a little more and get a Note 9 Pro

This review was originally pubbed on 24 July. It is being republished today, 30 July, as the smartphone goes on sale.

There’s just one too many Redmi Note smartphones this year. The Redmi Note 9 Pro gets you a good-looking budget smartphone with a capable camera and excellent battery life. The Redmi Note 9 Pro Max “maxes” things out by getting features that not every buyer in the budget segment may crave, like a 64 MP rear camera, a 32 MP selfie camera, and 33W fast charging. But it’s good to have them, if you are ready to pay a little more. And then, we have the phone that started it all, the one that’s supposed to get you more bang for your buck than any other smartphone in the budget segment, the basic Note 9.

Over the years, the standard Note model was based on the tried-and-tested Xiaomi formula of getting you the best possible hardware at a price near 10K. From the Note 5 on, Xiaomi expanded the Note range to two smartphones: a standard model and a new ‘Pro’ model that got you that extra hardware that made it all worthwhile. With the Note 8 Pro, Xiaomi hit it out of the park, getting buyers a monstrously powerful smartphone with a MediaTek G90T inside that was a gaming beast, got you a crazy-good camera and looked good too. And with the Snapdragon 720G, that tradition continues with the Note 9 Pro and the Note 9 Pro Max. So where does that leave the basic Note 9? This year, Xiaomi went with gaming-grade MediaTek Helio G85 chipset, and the unit I reviewed comes with 6 GB RAM. A step (or two) down from the G90T, I expected a lot, but it just refuses to deliver. Thankfully, there’s other things going for this basic Note.

Let’s start with the things I liked about the new note 9:

What I liked the most about this phone is the battery life. With a 5,020 mAh unit inside and Xiaomi’s battery optimisations, the Note 9 easily lasted a good one and half day on a single charge and this includes a bit of gaming, photographs, lots of messaging, emails and the lot. Add an hour or two of gaming to the mix (which you probably won’t end up doing) and you can bring that figure down to a proper day (24 hours) with some battery life left to spare. This is quite impressive. It is a budget phone that’s made entirely of plastic, but this Redmi Note surely impresses with design. Image: Tech2/Sheldon Pinto

And just because it’s a budget smartphone does not mean that it should get a budget charger. This one goes with a fast-enough 22W charging on paper, which is actually a better deal than the more expensive Redmi Note 9 Pro that gets you an 18W charger in the box. While 22W charging may sound exciting, you have to remember that it has to power up a massive 5,020mAh battery. Long story short, the phone goes from 0-100 percent in about 2 hours and 20 minutes — which is not bad — but is about the same as the 18W charging speeds of the Note 9 Pro. Turns out that the phone needs a software update until it can take advantage of that 22W charger. So, until the update arrives, you will be charging this phone at 18W. The good thing is that once you have charged it up, battery anxiety will be the least of your worries. 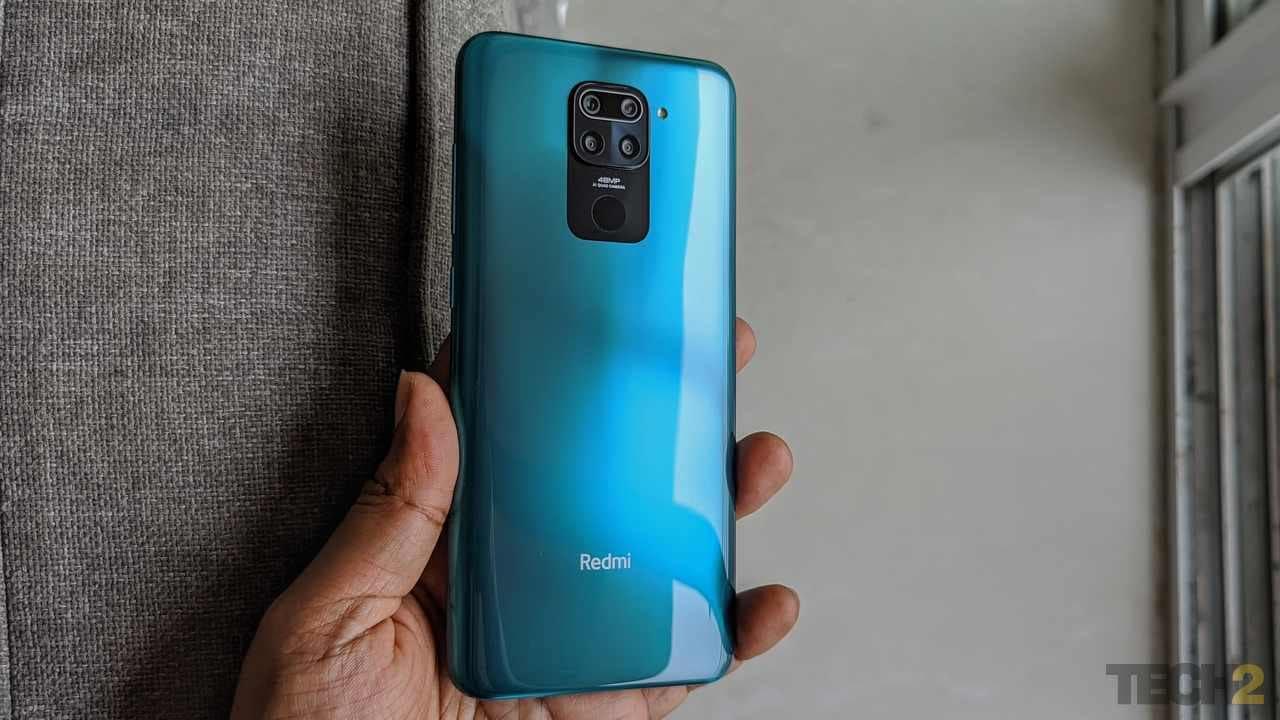 It’s a budget phone that’s made entirely of plastic, but this Redmi Note surely impresses with design. That unibody polycarbonate shell literally holds the phone together, and it’s finished to perfection around the ports, corners and even around the display.

When I unboxed the phone, I spent a good amount of time simply admiring the Aura Balance design that had a nice hand feel to it, and even felt lighter than its glass-laden counterparts. Of course, I would still prefer the Redmi Note 8 with a Glass back, but being made out of plastic also means that it won’t shatter like glass. It’ll still scratch, though. I also like how seamless the transition from the rounded back panel to the side frame felt, because it isn’t two parts but a single piece, made to appear like two parts. 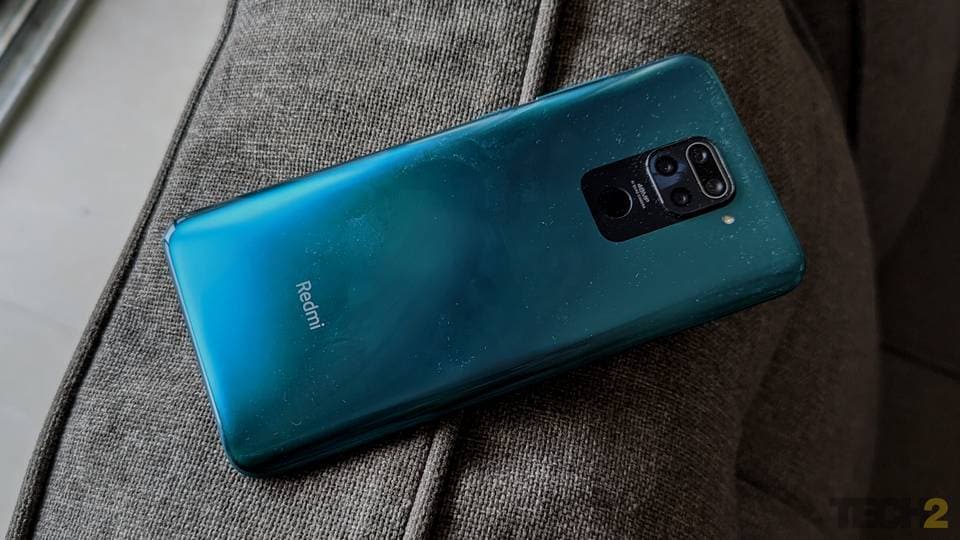 I realised how hard it was to keep this shiny plastic body clean. Image: Tech2/Sheldon Pinto

I honestly feel that more phones should be made this way, until a day passed and I realised how hard it was to keep this shiny plastic body clean. It picks up a ton of dust, lint, smudges and you will need to clean it up every time you pick it up, unless you slap on a matte-finished case and cover up that lustrous enamel-like texture.

While clicking photos, they may appear oversaturated thanks to the display. So, you may end up peeping over your camera viewfinder twice just to double-check the colour of that flower in the garden, a sunset at the beach or your friend’s T-shirt that looks a bit too different from the real thing. Don’t worry, they just look that way on your phone. The images look quite sharp, and manage a good amount of detail when the light is right. Image: Tech2/Sheldon Pinto

The quality of the images in terms of detail is just about average. They look quite sharp, and manage a good amount of detail when the light is right. Sadly, the noise creeps in even when there’s a cloud over you. Despite featuring an auto HDR mode, there were plenty of instances of clipped highlights, whether it was shooting a subject indoors or a sunset outdoors. This even applies to low light scenes, where I ended up preferring the photos shot in Auto mode vs the ones shot using the Night mode, that basically made them brighter. Portraits came out quite nice whether I was using the rear camera or the front-facing camera, with surprisingly good edge-detection and crisp images. Backgrounds did end up being overexposed, but the camera always ensured that the subject was exposed right.

Video was a bit disappointing. The camera maxes out at 1080p 30fps and the only other option is to shoot at 720p, again at 30fps. The software stabilisation is rock-steady, but details fall short even for a budget smartphone.

Display gets the job done 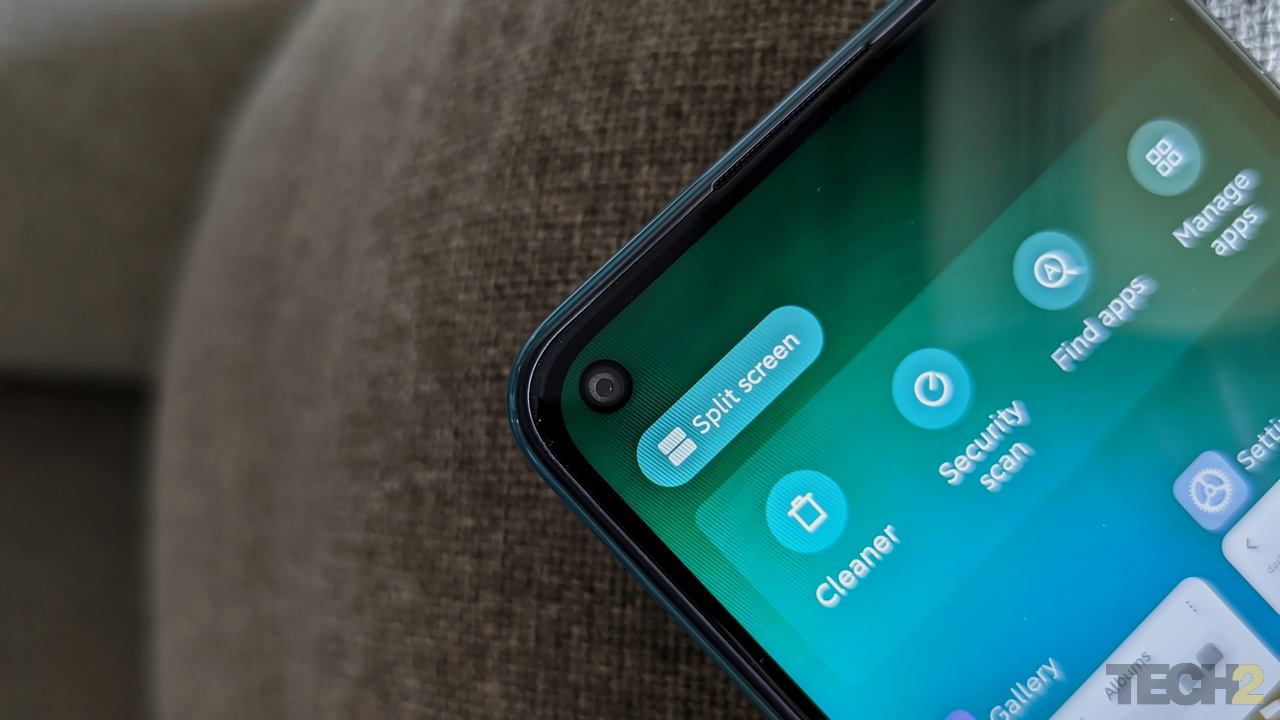 The smartphone comes with a punch-hole display. Image: Tech2/Sheldon into

It’s a regular 60Hz LCD display covered in Gorilla Glass 5, but this one’s a lot better than the jittery experience I had on the Poco M2 Pro. Like the rest of the brotherhood, it also features a hole-punch display with an FHD+ resolution, but I honestly did not like how oversaturated the display was, no matter what colour scheme you choose in Settings> Display> Colour Scheme. Given that it sits in a budget smartphone category, this kind of a display with punchy colours may appeal to some. But it’s a problem when you view photos on it, as the colours are inaccurate. While it did not appear too bright indoors, this one did surprisingly well under direct sunlight. I did manage to watch an episode of The Witcher indoors without peeking too hard, because most of the visuals are quite dark.

Software needs work, even if there’s Google inside I honestly did not like how oversaturated the display was, no matter what colour scheme you choose. Image: Tech2/Sheldon Pinto

Surprisingly, I did not come across ads or promotional notifications despite the usual amount of bloatware that’s pre-loaded on the smartphone. But firing up the video app did throw up plenty of sleazy content. The phone on the box preaches about its Google apps. And it does come with them, but it does not replace your Dialer and Messages apps like on the Mi 10. This also means that you have duplicates of most apps cluttering your homescreen. Upon first boot, you will be greeted with an “agree to continue” message with almost every second Xiaomi app (including Clock, Calculator) you open. So be wise about what you agree to, as the ‘Cleaner’ app sends your data to Clean Master’s servers — an app that has been. Despite having a Helio G85 chipset coupled with 6GB RAM, it is surprising that the phone does have the occasional hiccups and stutters while scrolling through the Google Feed (swipe right from the home screen), opening the ‘Recents’ menu and while minimising apps. And that brings us to the performance.

Performance is a problem

Apart from not being thoroughly optimised for MIUI, it’s the gaming bits that disappoint the most. With a MediaTek gaming-grade chipset inside, I expected the phone to fly with popular games at default settings. Sadly, that was not the case.

Starting off with Call of Duty: Mobile, you can only run the game at low graphics settings and medium framerates. This makes for rather blocky graphics and textures, and the processor seems to have a tough time keeping up. The gaming experience is mired with lag, delays and random freezes, and even crashes. Next, I fired up Asphalt 9: Legends that works well on most budget smartphones, and the phone ran it borderline smoothly only at the lowest graphics setting (performance) as the default. High-quality graphics settings made for a bad experience. PUBG Mobile was the only enjoyable game that ran well at HD graphics and high framerates. So, if gaming is your thing, it’s best to avoid the Note 9.

In the end, the Xiaomi Redmi Note 9 does live up to its roots, but not up to my expectations nor to what Note owners have come to expect from this device. It still needs a lot more love (spit and polish) from the brand when it comes to software optimisation and gaming performance. Hopefully, these should be resolved with future updates (MIUI 12), but for now, they aren’t. If you have last year’s Redmi Note 8, there’s no good reason to upgrade. I would recommend the Note 9 only if all you care about is getting the best possible hardware at Rs 11,999 (and of course don’t prioritise gaming).

If you are looking for a better performing smartphone at the same price tag, the Realme Narzo 10 is a better budget gaming option, albeit with an HD+ display.

If you can stretch your smartphone budget a bit, I would highly recommend the Redmi Note 9 Pro for Rs 13,999 that gets you a bigger display, a better-performing processor, smoother software experience, a better macro camera and selfie camera, a side-mounted fingerprint reader (for those who prefer it), all packaged in a more premium-feeling glass and plastic shell.

Redmi Note 9 to debut in India at 12 pm today: Here is how you can watch the launch event live

Redmi Note 9 with up to 6 GB RAM to go on sale today at 12 pm: Pricing, specifications, features

Xiaomi Redmi Note 9 series to launch in India today at 12 pm IST: Here's how to watch it live