While the chipset inside the Realme 7 Pro remains the same, there are some class-leading features that place it at the very top of the budget segment.

The perfect mix of hardware and performance under Rs 20,000.

Realme recently launched it’s 7 Pro smartphone, the successor to the 6 Pro that was launched early this year. The Realme 6 Pro (Review) was pretty much an all-rounder with a great spread of software and hardware features, which included a 90Hz display and a 2X optical zoom telephoto, both of which fared well in our review.

Oddly, those are the very two hardware features that Realme has plucked out of the upgraded 7 Pro. Moreover, the smartphone brand also chose to retain the Qualcomm Snapdragon 720G chipset from the 6 Pro. So, from a performance standpoint things have remained the same. But there are plenty of features that have been added to this upgrade. There’s a SuperAMOLED display, a 65W charger, dual stereo speakers and a 32 MP selfie camera, all squeezed into a fairly slim and lightweight package that looks and feels better than competition. And all of them put together have convinced me that the 7 Pro is the best Android smartphone to go for in the top end of the budget smartphone segment.

What does it do better than the competition? 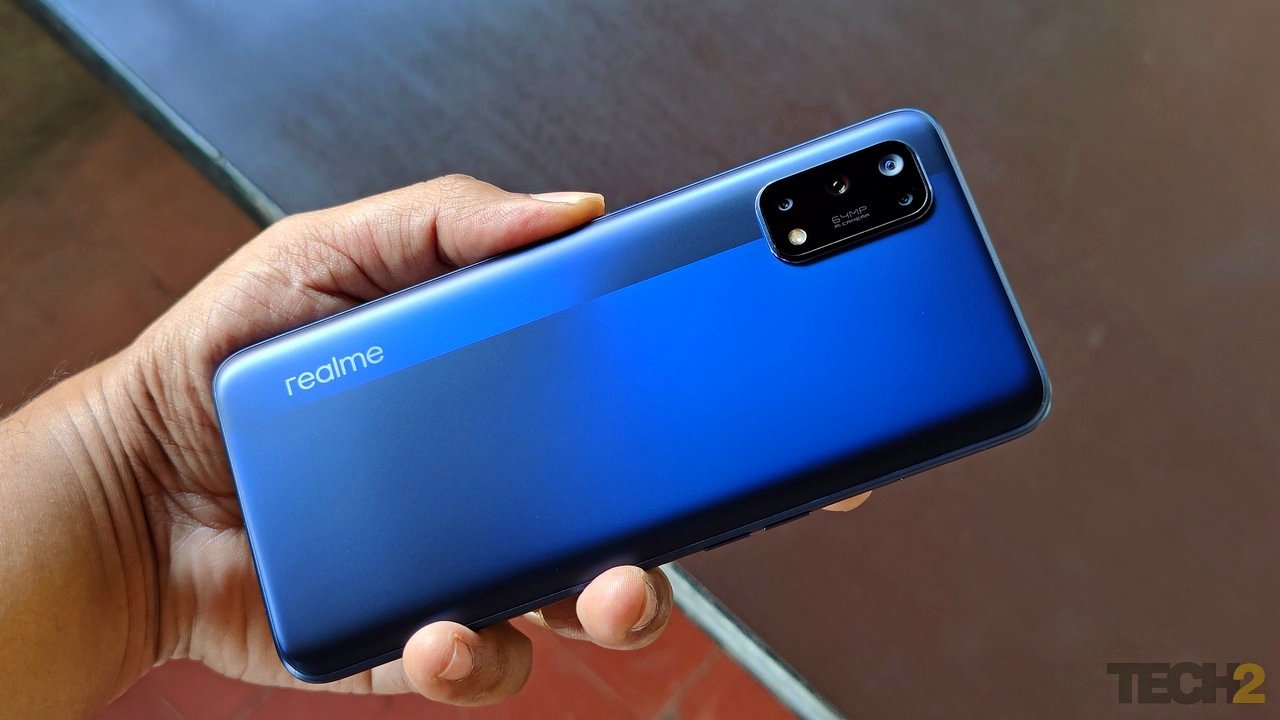 For starters there’s that eye-catching design. I received the matte-finished variant that’s strangely called “Mirror” Blue. It’s got a subtle, yet eye-catching colour that shifts from purple to blue to black, depending on how you hold it, and the surrounding light. I’m not a fan of gold, but the gold coloured accent on the power button is a nice touch. Image: Tech2/Sheldon Pinto

The back panel also gets a split inlay, that looks like a cross-section of light entering a glass block and bending after it crosses the division. I’m not a fan of gold, but the gold coloured accent on the power button is a nice touch. 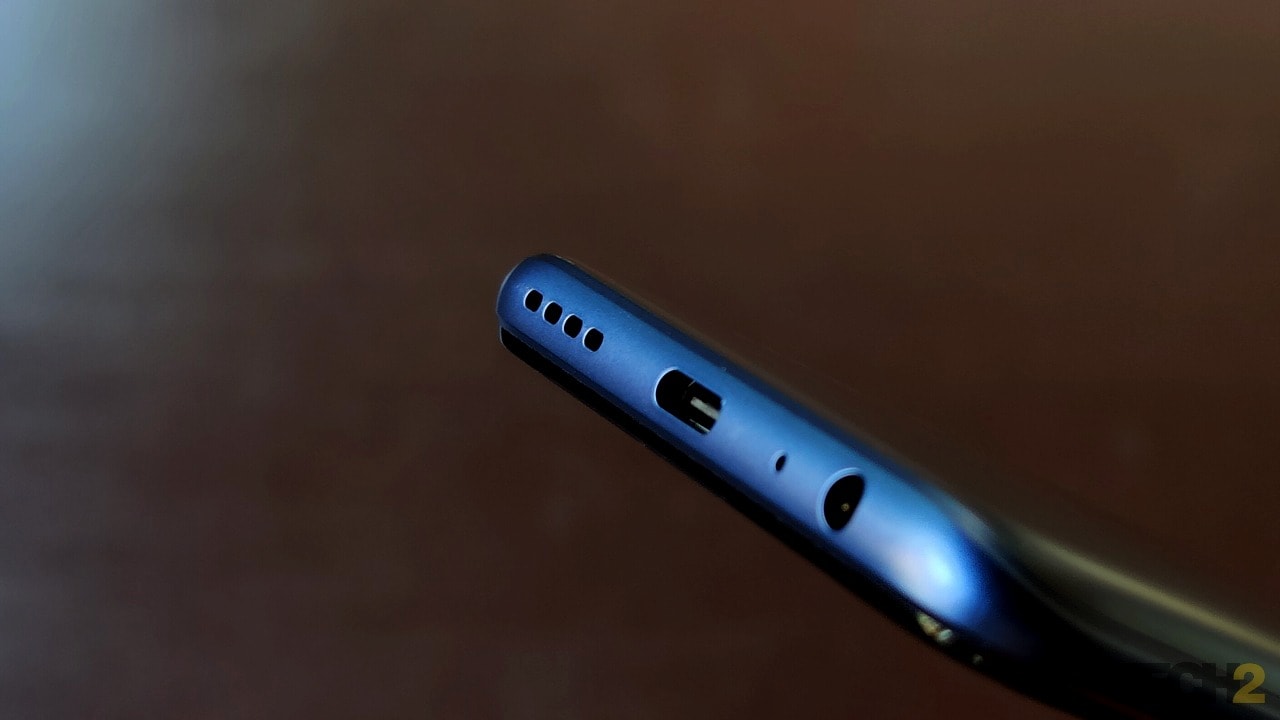 Despite being made completely out of plastic, it does not feel cheap. Image: Tech2/Sheldon Pinto

Surprisingly, despite being made completely out of plastic, it does not feel cheap, and all of its ports, corners and edges have been polished to perfection. The plastic construction also makes it lighter (by about 30 gms) and thinner than a Redmi Note 9 Pro Max and the Poco X2 — its competition. There’s that gorgeous Super AMOLED display that’s definitely better than the one on the Samsung Galaxy M31s. Image: Tech2/Sheldon Pinto

Then, there’s that gorgeous Super AMOLED display that’s definitely better than the one on the Samsung Galaxy M31s (also priced in the same segment). While both phones do not support HDR 10 playback like the Poco X2 does, the blacks on the 7 Pro are definitely better and colours more neutral than the M31s, so I didn’t miss it much. 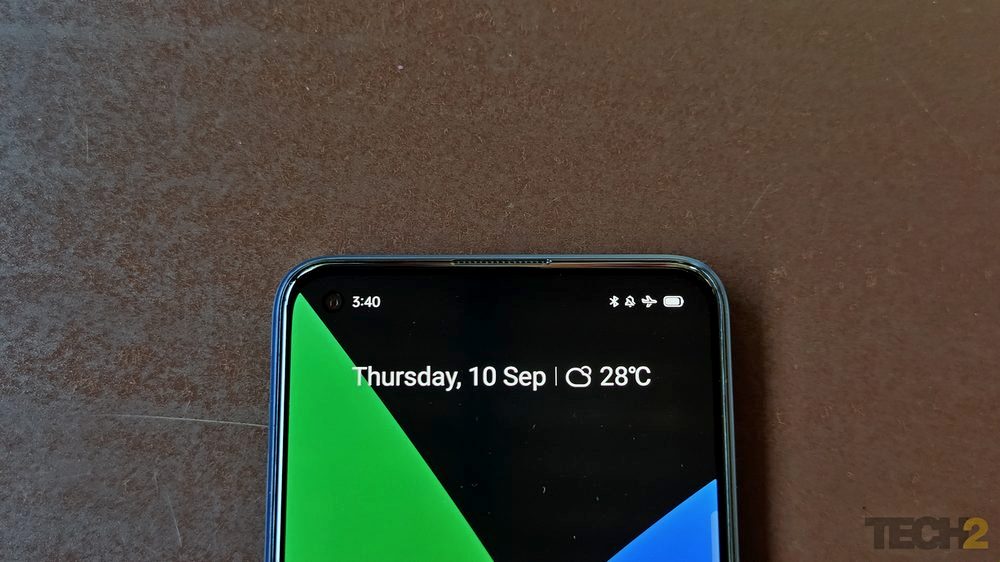 The blacks on the 7 Pro are definitely better and colours more neutral than the M31s. Image: Tech2/Sheldon Pinto

The AMOLED display, when combined with the excellent and clear dual stereo speaker support, means that you can actually stream your flicks without plugging in your earphones. And when you need to, you can always plug in your standard earphones with a 3.5mm audio plug because there’s also a headphone jack available, unlike the OnePlus Nord. An AMOLED display also gets you an always-on display (AOD) feature that shows you icons of notifications when the phone is locked. Image: Tech2/Sheldon Pinto

The audio quality through third-party earphones sounds great and well balanced, but it does more justice to smaller earphones than to bigger headphones. The second speaker is the earpiece and also does a good job at delivering a stereo effect, both while watching movies and playing games. While the UI is far from stock Android (it seems like a fork of Oppo’s ColorOS), there are plenty of pre-installed Google apps. Image: Tech2/Sheldon Pinto The default theme also gives the impression of a stock Android OS. All of that combined with the well-optimised hardware underneath made for really nice software experience that is hard to find in the Rs 15K - 20K price bracket. 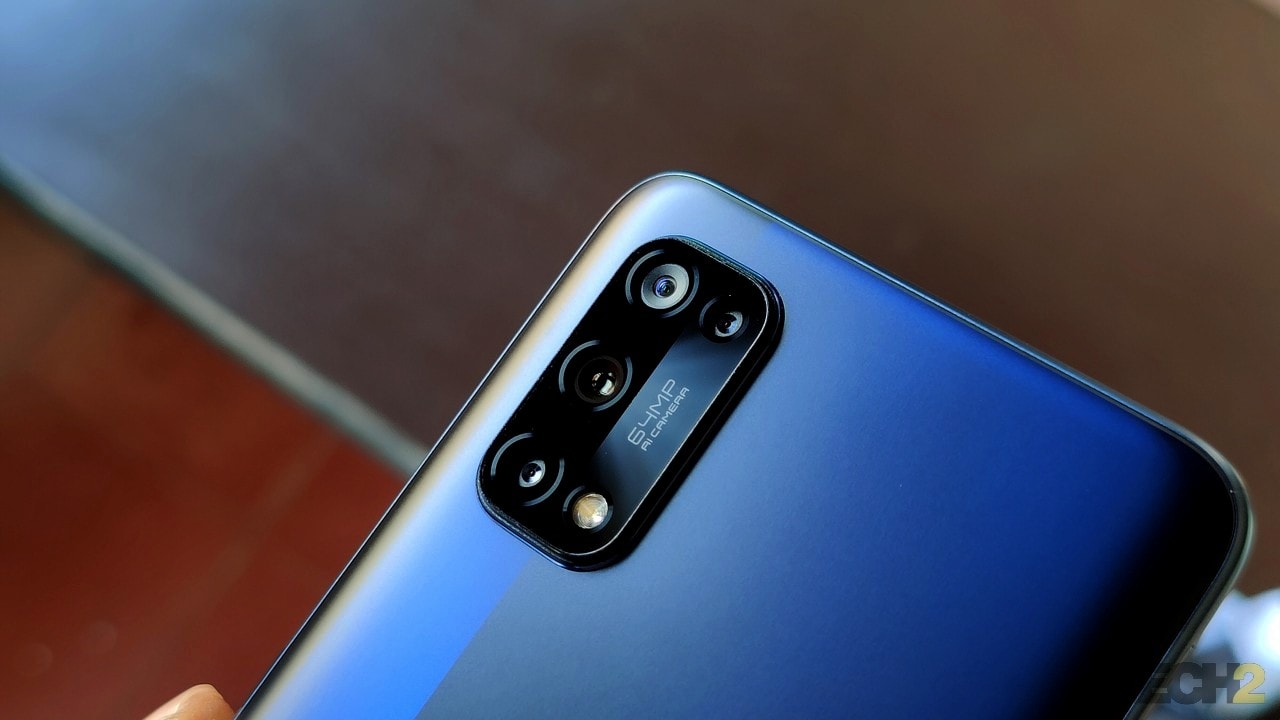 Realme has made good use of that 64 MP camera sensor. Image: Tech2/Sheldon Pinto

Realme has made good use of that 64 MP camera sensor. I really have no complaints about images shot in daylight. They look crisp, don’t go overboard with the colours and showcase great dynamic range with noise levels well under control. And I was quite surprised that it does an equally good job after the sun sets, and under street-lit scenes. The low-light capabilities of this smartphone are quite impressive given its price. And then you turn on the dedicated night mode and your jaw drops. While the resolution of night mode images drops by a bit, the colours remain natural and the dynamic range and noise is well under control. You cannot pixel peep too much, but these are definitely one of the better night mode photos I have seen on a budget smartphone this year.

Despite the cloudy weather in Mumbai that is not ideal for checking out the stars, I did try out the astrophotography mode. It’s indicated by an icon at the top end of the viewfinder under the night mode. As expected, I did not get good results, just an over-brightened, blurry image. 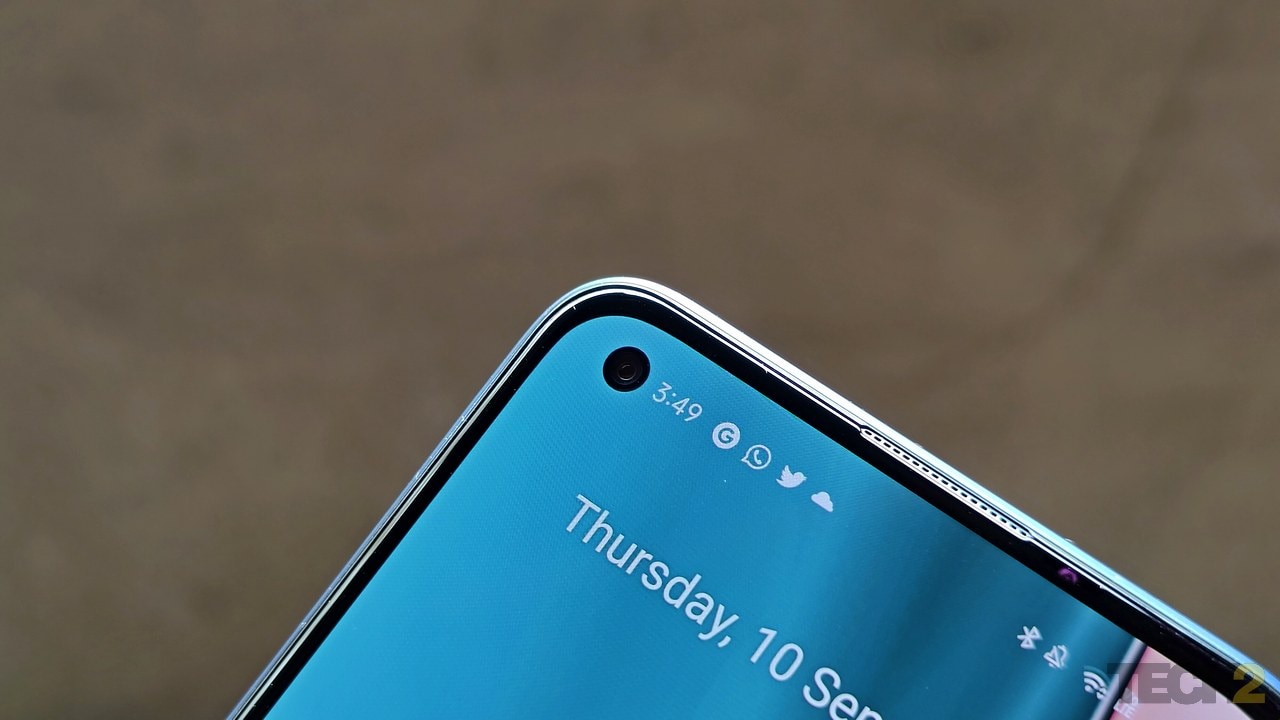 Selfies come out quite detailed and sharp. Image: Tech2/Sheldon Pinto

Selfies come out quite detailed and sharp. And in low light, you can switch to Night mode as well. Video is the standard stuff, but stabilisation is quite impressive at 1080p @60fps even though it crops off quite a bit of your frame. There’s also a night mode for video, but it didn’t really impress, and just brightens up the low light scene, adding a lot of noise in the process. I definitely preferred the standard video modes over it.

Because there’s no high-refresh rate display, the 4,500mAh battery got me more than a day of battery life with casual use and an hour of Call Of Duty: Mobile on max settings. If you game a lot (about two hours or more) you will still have about 20 percent battery life left by the time you get to bed. And when you do run out of battery life, there’s nothing to worry about as Realme packs in a monstrous 65W Superdart charger in the box. It charges up the 7 Pro from 0-100 percent in just 34 minutes, and there’s really no other smartphone in and around the budget segment that can come close to those charging speeds.

Realme did surprise many at the launch, by adding the brand-new MediaTek G95 chipset to the standard 7 model instead of the Pro. But the 720G is no slouch and handles games quite nicely. You can even run Call of Duty: Mobile at max graphics settings (with anti-aliasing ON) but the phone will heat up quite a bit after about half an hour of gameplay.

It’s recommended to stick to ‘High’ graphics settings to keep the phone running cool. Indeed, this is the only area where the 720G falls a bit short, but that’s only if you run graphic-heavy games, maxed out.

The vibration motor for haptics is a bit too harsh, so I turned it off after setting up the smartphone. While the primary camera impressed, the macro camera just serves to fill up the spec sheet. The ultra-wide angle camera clicks great photos, but the colours, details and dynamic range fall short. Then again, these are things that the competition does not pull off too well either, so I may be nitpicking here.

Should I get one?

The only other smartphone that comes close to the Realme 7 Pro in the sub-Rs 20K segment is the Poco X2. Howevert, it's focus is on gamers (keeping in mind that 730G chipset and the 120Hz LCD display), as everything else is better on the Realme 7 Pro. Gaming on the 7 Pro is not a bad experience though, given its OLED display and its dual speaker setup (not available on the Poco). The Nord offers better performance, a great primary camera and a 90Hz OLED display. But all of that depends on whether you can actually buy one, as it's almost always out of stock.

Those are your options if you are willing to spend over Rs 20,000 and step into the low-end of the mid-range segment.

As things stand right now, there's really no defeating the Realme 7 Pro, which will remain the (sub-Rs 20K) budget smartphone to beat in 2020 and maybe, even 2021.