The Oppo K1 offers an in-display fingerprint scanner on a budget and is a good pick if you hate flash sales. Not for heavy gamers Stuck on Android Oreo Average camera

The Oppo K1 is a practical alternative to the Redmi Note 7 Pro and the Galaxy A30.

We've seen Oppo push design boundaries over the past year. Whether it was the gorgeous Oppo Find X or the R17 Pro, they've continuously impressed us with innovative designs and impressive use of colour gradients. But the budget segment isn't really Oppo's stronghold and the Oppo K1 comes a long way in making the likes of Xiaomi, Honor and Samsung take note.

Now the Oppo K1 isn't really a new smartphone. The phone was launched in China back in October but what makes it unique here is that it packs an in-display fingerprint scanner - a feature that has stuck to flagship phones so far - at a price of Rs 16,990. The phone also features a 25 MP AI front camera for those who love selfies. 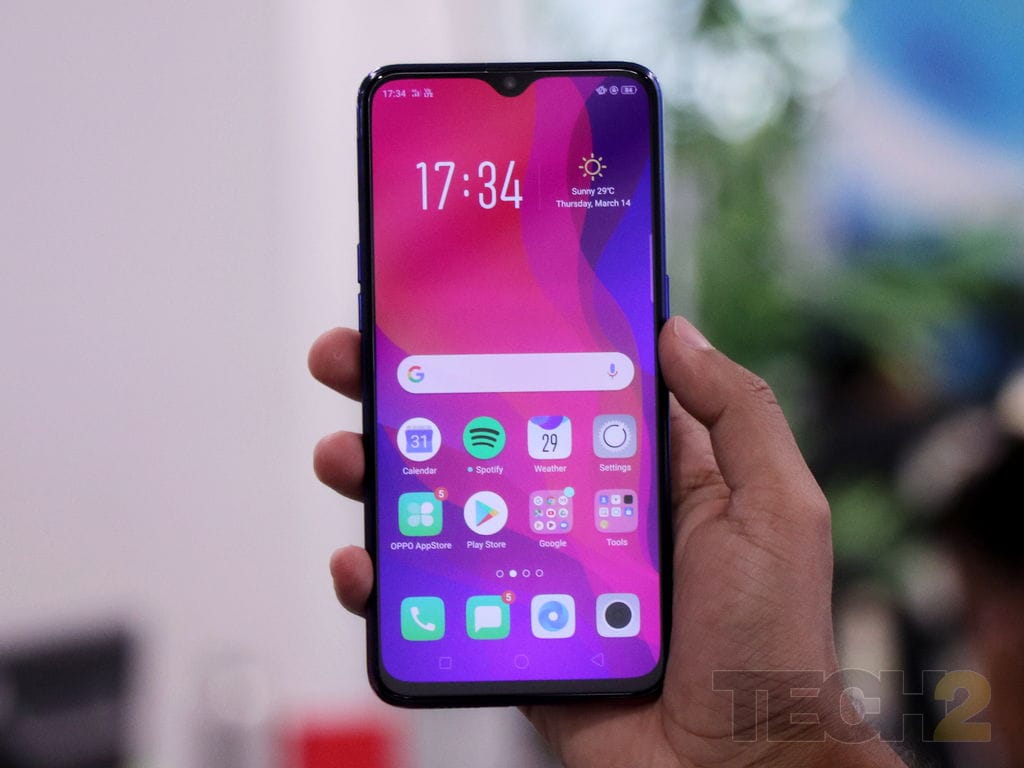 The question that persists though is whether shelling out about Rs 17,000 for this phone really makes sense when you've got a bevvy of options to choose from? Yes, it definitely does. Even more so if flash sales and waiting in a queue to buy a smartphone isn't your thing.

Oppo surely knows how to make a phone look attractive

The Oppo K1 will certainly wow you the moment you pick it up. Actually, it'll have your attention the moment you set your eyes on it. The Astral Blue variant is what we received for review and it immediately had everyone around trying to have a look at which phone this was.

That's because of the glossy gradient colour tone you have on the back. Even though I personally like black and grey phones more, I certainly love how peppy this phone looks. The front also looks almost identical to the OnePlus 6T with its waterdrop notch and the bezels here are as minimal as they could be. The Oppo K1 features a polycarbonate back with a glossy plastic panel and a two-tone finish. Image: tech2/ Omkar Patne

The phone is made of polycarbonate plastic but feels sturdy and comfortable to hold. The plastic makes the phone less slippery and if you are someone who drops your phone every now and then, this would surely be a better pick over a phone with glass on either side. Fingerprint and smudges are something you'll have to deal with though and Oppo does throw in a clear case in the box if you wish to preserve that glossy back over time.

The phone is also fairly light at 156 grams and I had no issues with one-handed use of the phone.

Definitely one of the best displays in the segment

Budget phones generally pack LCD displays because they're fairly cheaper but Oppo isn't cutting corners here. The K1 gets a 6.4-inch AMOLED display which is plenty sharp and vibrant.

Watching video content on the phone is a joy and though colours, in general, are a tad oversaturated, it's certainly something you won't complain about given the price. The panel also gets quite bright and viewing the display under bright conditions are certainly a non-issue. 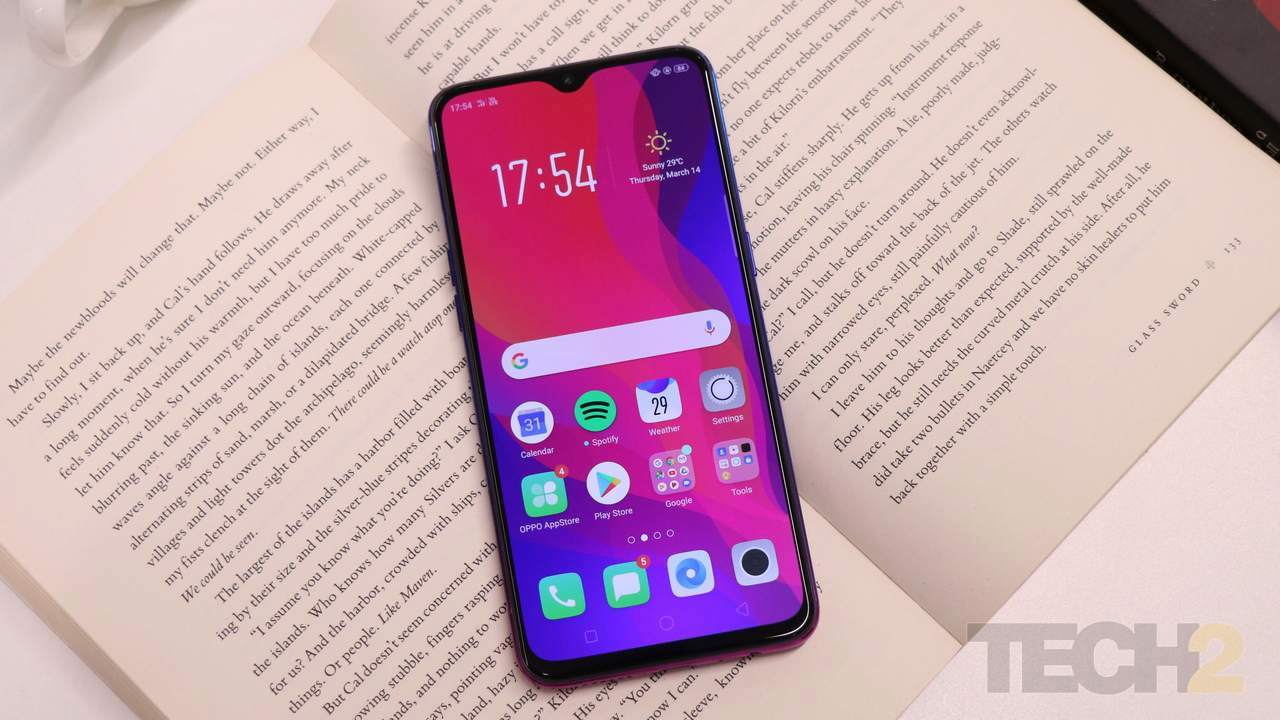 Even when you're gaming, textures look great and there are a number of options under the display settings to further tweak the display to your liking.

The notch is also unobtrusive and really didn't bother me much while watching videos in full-screen mode.

Handles everything well but not for heavy gamers

The Oppo K1 features the 14 nm Qualcomm Snapdragon 660 chipset clocked at a slightly lower 2.0 GHz instead of the full 2.2 GHz the cores are capable of. This means that you'll see buttery smooth performance for almost everything you do.

Apps loads fast and the UI handles multitasking fairly well. Our unit packs 4 GB of RAM and apart from keeping heavy online games in memory, the Oppo K1 does a good job in managing RAM.

Coupled with an Adreno 512 GPU, gaming performance is also fairly good on the Oppo K1. The phone stayed cool even during prolonged gaming sessions and only struggled a bit with games like PUBG Mobile and Asphalt 9: Legends. The K1 runs PUBG Mobile on medium graphics by default and does stutter occasionally. Asphalt 9 ran fairly well even at the highest graphic settings with frame drops only when there was a lot going on.

If you are looking for something that's better suited to gaming, the POCO F1 is still your best bet, provided you're willing to pay Rs 2,000 more.

The in-display fingerprint scanner also works very well. It's fairly fast and as far as accuracy goes, it registers your fingerprint 9/10 times. Coming from a capacitive fingerprint scanner, you'll also get used to the positioning of the scanner on the front fairly quickly. Feature-packed ColosOS 5.2 runs well but it's stuck on Android Oreo

The Oppo K1 runs on ColosOS 5.2 built on top Android Oreo 8.1 and while the software is a little dated, I barely had any issues with the UI during my time with the phone. What's also interesting is that ColosOS 5.2 already has a number of Android Pie design cues like the rounded corners for recent app cards.

ColosOS does shove a lot of apps down your throat for starters but over time, I've quickly learned how to ignore them. There a few well thought out features as well like the dedicated gaming mode and a quick access widget which can be accessed with a left swipe. The general animations are a little long drawn but even when you're quickly switching between apps, they don't stutter or freeze the phone for a few seconds.

Oppo's recently launched the F11 Pro with ColosOS 6 but that sadly hasn't made its way to the Oppo K1 yet. This means you'll still have to wait for Android Pie to arrive and there's no news on when it'll arrive either.

A decent overall camera package with a focus on selfie-takers

The Oppo K1 has a dual rear camera setup featuring a 16 MP f/1.8 primary sensor and a 2 MP depth sensor. If you have used an Oppo phone (or even an iPhone) in the past, you'll find the Camera relatively easy to get used to. You have all the regular shooting modes like panorama, portrait, sticker, time-lapse and an expert mode for manual controls.

Images shot in daylight turn out well with good amount of light. I found myself leaving the Auto HDR on for the most part because of the dramatic effect it creates but you can choose to turn it off for more natural looking shots.

The colours, in general, are slightly saturated than natural, but sharpness levels and exposure are on point. Tap to focus also worked flawlessly, letting me get the exposure levels just right for every shot.

The portrait mode works well with great edge detection and a very natural-looking separation of the background from the subject. The background blur does look a little unnatural because of how aggressively the blurring is done. This may or may not be something you like but it is worth mentioning.

In low light, the camera does well when you have a light source illuminating the subject but once you move to darker situations, you will notice a lot of noise creeping in. Oppo could have thrown in a night mode here, which I feel would have made the shots in low light more usable.

You can check out the images in the Flickr album to gauge the night samples for yourself. For selfies, the 25 MP f/2.0 does a very good job with details and colours. This isn't a wide angle lens if you're wondering.

Portraits also turn out well with good edge detection and the studio lighting effects also let you experiment with shots a fair bit.

You can shoot 4K 30 fps video using the rear camera but EIS doesn't work at that resolution. At 1080p 60 fps, the K1 does well to handle shake and also does well while shifting focus when you're not using tap to focus. Stability is not an issue while shooting video with the front camera as well.

3,600 mAh battery that lasts a day and a half easy

Now, phones under Rs 20,000 do usually have large batteries and the Oppo K1 certainly doesn't stand out on the specs sheet with its 3,600 mAh battery. Now don't get me wrong, that's still a large battery unit, but I really didn't expect to do as well as it did.

With moderate to heavy usage (binge-watching and playing PUBG Mobile included), I was easily able to end my day with 30-35 percent juice left. Even if you do forget to charge it overnight, it'll have enough juice for you to last through the next day with lesser usage.

Charging does take about 2 hours and 10 minutes because of the lack of fast charging but I'm certainly not complaining here.

The Oppo K1 is a great all-rounder which shines through because of its display and the inclusion of an in-display fingerprint scanner. With good battery life and decent performance, it's certainly worth a try. The Oppo K1 is a practical alternative to the Redmi Note 7 Pro. Image: tech2/ Omkar Patne

For Rs 16,990, the Oppo K1 does fall directly into Redmi Note 7 Pro territory but given the fact that the phone will be difficult to get your hands on, the Oppo K1 does come in as an attractive substitute. Sure it doesn't offer the sheer value of its competitors but if you just want to walk into a store and buy a good phone for the price, the Oppo K1 will surely not disappoint with what it brings to the table.

Oppo K1 with in-display scanner to launch today: Here's all you need to know

Moto One Macro review: A capable macro mode almost makes up for the phone's shortcomings

Samsung Galaxy M30 Review: You won't find a better display in this budget