With gaming performance from an Ultrabook form factor, this is the on-the-go gamer's dream machine.

As a gamer, I’ve always found it frustrating that my choice of gaming laptops is limited to either a chunky monster or a slim, under-powered device that runs too hot. If I want portability, my only option is an Ultrabook, which is great for work, but not for having fun. NVIDIA’s Max-Q tech was a stray ray of hope on the horizon, but laptops built on the tech have proven terrible at adapting it to slim designs.

Enter, the MSI GS65 Stealth Thin 8RF. The name is the only aspect of the laptop that’s clumsy. It’s slim, gorgeous and relatively lightweight. It also packs in some very impressive hardware and promises great battery life to boot. Could this be the perfect gaming laptop?

The laptop is impressively small. From the outside, you could easily mistake it for a premium Ultrabook like Lenovo’s brilliant X1 Carbon series, though I’d argue that the GS65 is more eye-catching. The gold accents are surprisingly elegant.

For the Stealth, MSI has cast aside its traditional black and red colour scheme and opted instead for a surprisingly classy gold and black scheme. The MSI logo is now also gold and is very reminiscent of Lamborghini’s badge. A gold trim runs around the lid, trackpad and headphone jack. The heatsink elements near the vents are also coloured gold.

This isn’t your traditional gold, but a more toned down, coppery gold finish. It’s a very nice touch, and more understated and elegant than I initially expected.

The design of the device is as elegant. The device is uniformly thick along the sides — I much prefer this to the tapered design of today’s laptops — and the lid is held in place with a solid-looking hinge. 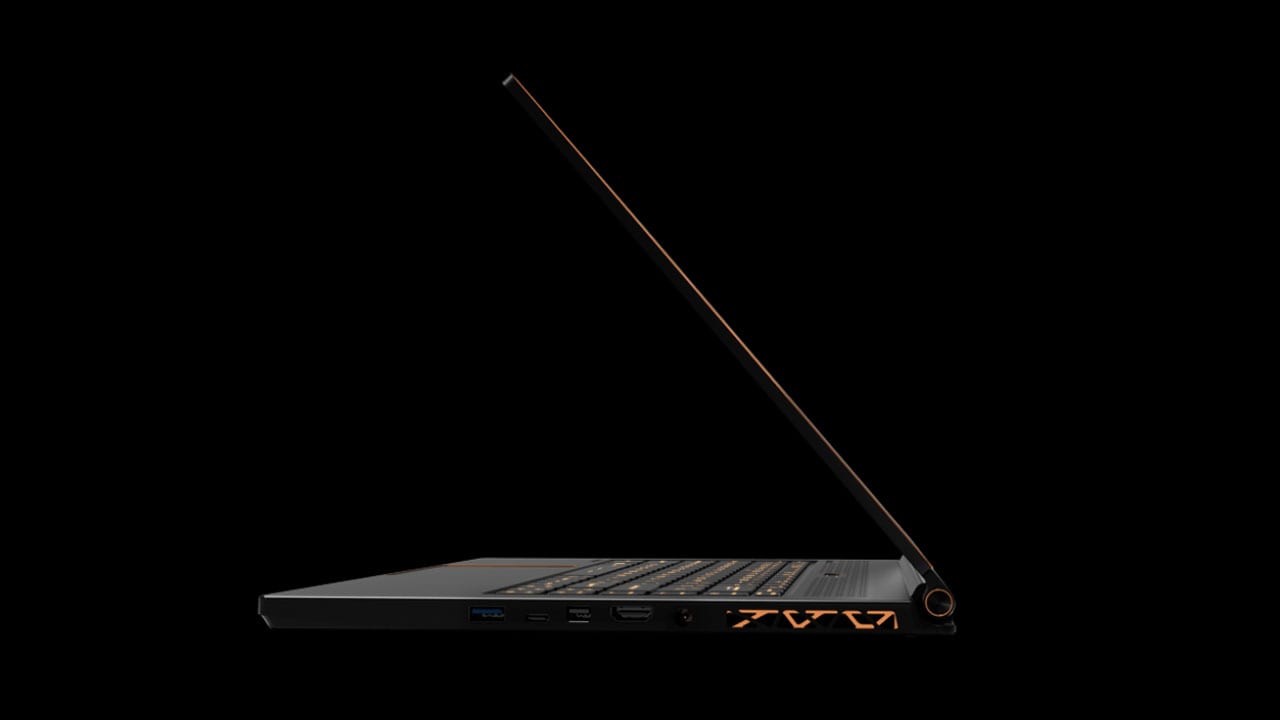 I like how the sides are symmetrical rather than tapered.

When you lift the device, you’re immediately struck by how light it is. At 1.88 kg, it’s a mere 50 g heavier than the 15-inch MacBook Pro. The slim bezels also mean that the laptop isn’t much larger than a traditional, 14-inch laptop.

That lightness does come at a price, though. The device feels more plastic than metal and a little flimsier than most laptops in the same price range.

There isn’t room for a full-sized keyboard with numpad, but MSI has still ensured that gamers will have little to complain about by at least including full-sized arrow keys. As with all MSI laptops, the keyboard is made by SteelSeries.

The keyboard was nice to use, if a little stiff and responded consistently to key presses. 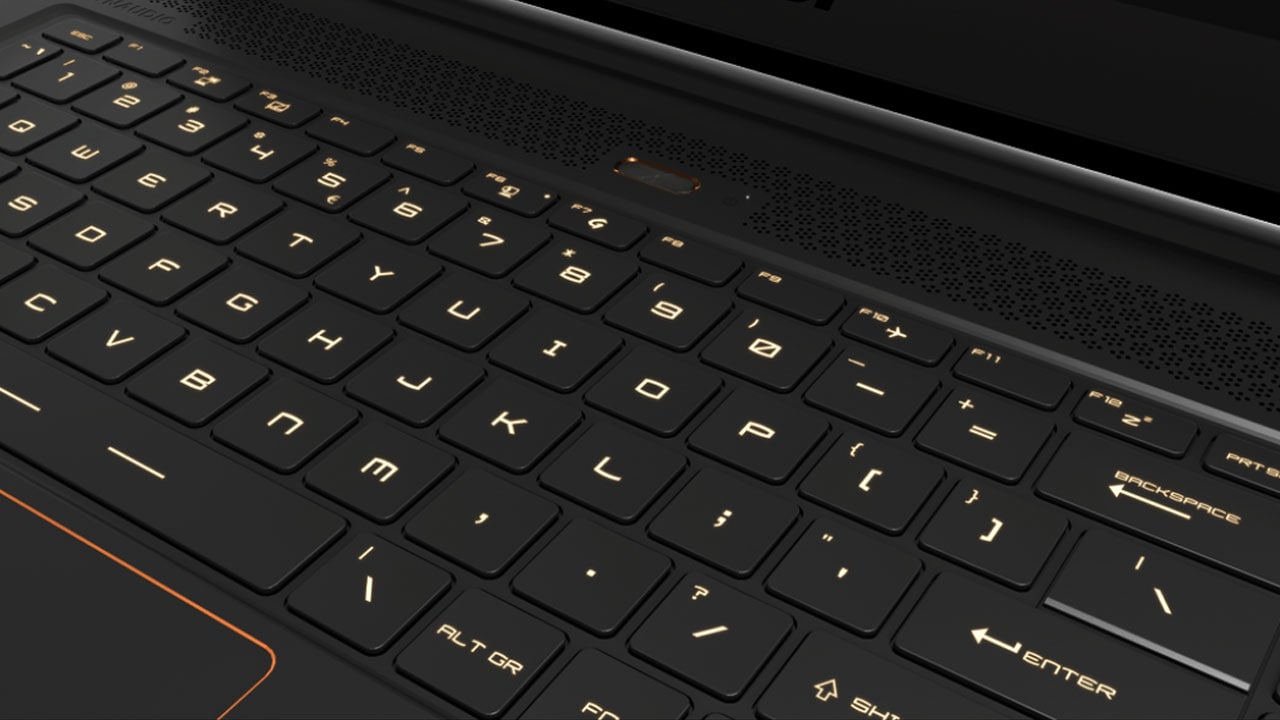 The keyboard is nice to use, if a little stiff.

The colours of the RGB backlit keys can be fully customised and you can even setup macro keys, colour patterns, etc.

I did have major issues with the keyboard at first. It simply failed to respond to keypresses and would randomly stop responding for a minute or two. While typing in Word, keyboard input would sometimes appear several seconds after typing. Reinstalling the SteelSeries engine and various MSI programs didn’t help.

Finally, a full Windows reset and a fresh install of the SteelSeries software got things working. This is clearly a software issue and one that will, hopefully, not repeat itself again.

The trackpad is a comfortable size and good enough for general use. Obviously, you’re not going to be gaming with a trackpad.

MSI went all out when they kitted out this beauty. The review unit I received came with an Intel Core i7-8750H with a maximum speed of 4.1 GHz. This is a 45 W chip with 6 cores and 12 threads. That’s three times more than on most laptops and 50 percent more cores than most gaming laptops. MSI did say that a Core i9 version with even more cores would be available. The laptop is kitted out with some of the best hardware around.

This powerful CPU is backed by an NVIDIA GeForce GTX 1070 with Max-Q design and 8 GB of VRAM. You also get 16 GB of DDR4 RAM, which can be configured up to 32 GB.

The 512 GB of SSD storage was actually made up of two drives in RAID 0, making for incredibly fast read and write speeds.

The included webcam is an HD 30 fps unit, which is acceptable, but not great.

On the software side of things, the device is bundled with the usual clutter. A Norton antivirus license that’s only valid for 60 days, a 30-day trial of Microsoft Office and a 60-day trial for WTFast. There’s also MSI software like Dragon Centre, Nahimic, etc. The only useful programs, at least for my use-case, were Dragon Centre and the one-year subscription to X-Split gamecaster.

Unfortunately, the laptop lacks any means of biometric authentication. There’s no fingerprint reader or Windows Hello-compatible webcam to be found here.

As befitting a gaming laptop, MSI has gone with an FHD 144 Hz display with a 7 ms response time. As mentioned earlier, the display size is 15.6-inches.

An FHD resolution (1920x1080 pixels) is no match for Apple’s stunning Retina displays, but it’s a very sensible choice for a gaming laptop. The resolution is high enough that you won’t notice pixels unless you’re really looking for them and low enough that the graphics card can pump out pixels fast enough to take advantage of that higher refresh rate. A higher refresh rate basically means that motion blur is reduced, which is important for gaming.

I was initially disappointed at the lack of support for G-Sync, an NVIDIA technology that reduced display tearing in fast-paced scenes. Thankfully, in real-world usage, I saw no tearing while gaming or watching movies.

The quality of the display panel was also quite nice and showed accurate colours. In our tests, the display offered about 90 percent sRGB coverage (most monitors manage between 90 and 95 percent, though Apple offers 140 percent). Measured contrast ratio was excellent at around 720:1.

I saw no notable difference in image quality before and after calibration, so it’s clear that MSI is making the most of the display they have.

As expected, performance was spectacular. The GTX 1070 is an exceptionally powerful card by any measure. However, the Max-Q branding means that the card in the GS65 was tuned to hit a performance-power consumption sweet spot that saps a noticeable portion of the card’s peak performance capability.

Max-Q is the reason this laptop is so thin and light, though, which more than justifies the loss in power.

In my testing, the laptop easily chomping through every game and benchmark I threw at it. Games never dropped below that magical 60 fps mark even at maximum settings. In Rise of the Tomb Raider and Far Cry 5, at max settings, I saw an average of 78 fps. Doom hit a whopping 160 fps at Ultra settings. Video conversion time was also among the fastest I’ve seen.

When it comes to performance, this laptop isn’t going to be holding you back.

The laptop runs quite cool for the most part, but under load, it can get very hot. While converting video, the CPU hit 88 degrees Celsius and the fans got quite loud. Even while gaming, it’s not unusual to see internal CPU temperatures of around 90 degrees.

A by-product of the heat is the fact that the laptop can get very loud as it attempts to cool the sizzling components. The good thing here is that that cooling works, because the laptop could sustain that load over several hours of gaming.

Audio quality and volume were quite decent, though I would have preferred the volume to be a bit higher.

The webcam is just tolerable.

Here’s the icing on the proverbial cake. Normally, I don’t expect a gaming laptop to survive more than 40 minutes when gaming and a couple of hours under regular use (web browsing, movies, etc.).

The MSI GS65 pulled off 90 minutes of continuous gaming and almost 4 hours under a PCMark 8 workload. If I were to be doing something simple, like browsing the web, I think the laptop would have touched the 5-hour mark.

This incredible battery life is more than double that of current gaming laptops.

I think I’ve fallen in love with the GS65. It offers that perfect combination of price, performance and portability which, as a gamer, I don’t think I can now live without. Every time I travel, I’m left frustrated by the fact that my gaming must be put on hold. Why shouldn’t I have the freedom to play Battlefield 1 while waiting for my flight?

The laptop isn't perfect, it tends to run very hot and I'm a bit wary of the build quality, but compared to normal gaming laptops, the MSI GS65 is thinner, lighter, and even faster than most. Compared to Ultrabooks in the same size range, the GS65 is just as light and several orders of magnitude faster. Why wouldn’t anyone want a laptop like that?

This laptop might see some serious competition if and when the Razer Blade comes to India, but until that happens, I can say with complete conviction that the MSI GS65 Stealth Thin 8RF stands alone.