I might sound like a fanboy, but this side of Apple, few devices are as exciting as Lenovo’s X1 range of ThinkPads.

If one were to think of the most exciting, dependable and reliable laptop brands in the market today, Lenovo’s ThinkPad line is the one that immediately springs to mind.

These laptops come with mil-spec ratings for reliability and are easily among the most ergonomic laptops around. At the pinnacle of this line-up is the ThinkPad X1 Carbon, and alongside it lies the X1 Yoga.

With Lenovo announcing a refreshed line-up of devices today, it was but obvious that all our focus would gravitate towards the flagship products. Thankfully, I got a chance to spend an hour or so with the devices, and here are my first impressions.

Without question, the build of both devices is spectacular. The design is mostly unchanged from the previous model, but like any good design, doesn’t need a drastic redesign. The X1 Carbon and X1 Yoga look very similar at first glance, but the Yoga is actually a bit thicker and heavier. The X1 Carbon itself feels incredibly light and sturdy. Lenovo states that its weight is a mere 1.13 kg, making it very easy to carry with one hand. The X1 Yoga comes in at about 1.4 kg.

What struck me with the Carbon and Yoga were just how light and how sturdy they felt. They feel like premium devices and they feel rugged. A MacBook, for example, feels solid, but it also feels like there’s a “handle with care” sign plastered all over that aluminium body.

The rest of the design is the standard Lenovo fare. You get the usual ThinkPad keyboard, TrackPoint, etc. 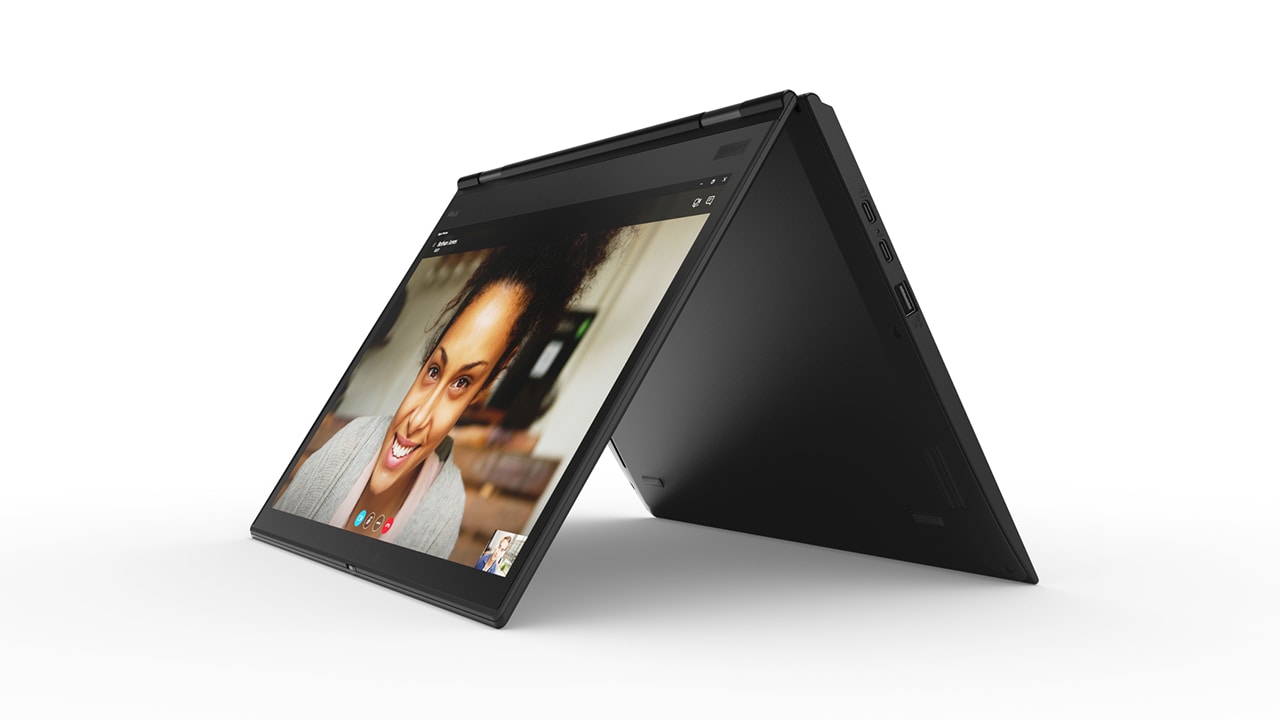 The Yoga is a convertible device with a 360-degree hinge

In terms of design, the Yoga is slightly more interesting. Being a convertible device, it does have a stylus, but this stylus is, thankfully, integrated into the body of the device itself. It’s even got a little notch that you can use to get a better grip when pulling it out.

One thing I will note is that both devices seem to attract fingerprints with remarkable ease. Granted, several dozen of us journalists were pawing at the devices, but within two hours, the devices were covered in greasy fingerprint stains.

As expected, the devices pack in the latest PC hardware. You get a selection of 8th gen Intel CPUs to choose from, at least 8 GB of DDR4 RAM, high-speed M.2 SSD storage, and of course, a very sane and sensible collection of ports, which includes USB-C and USB-A. I was also very happy to note that Lenovo saw fit to throw in an HDMI port as well. 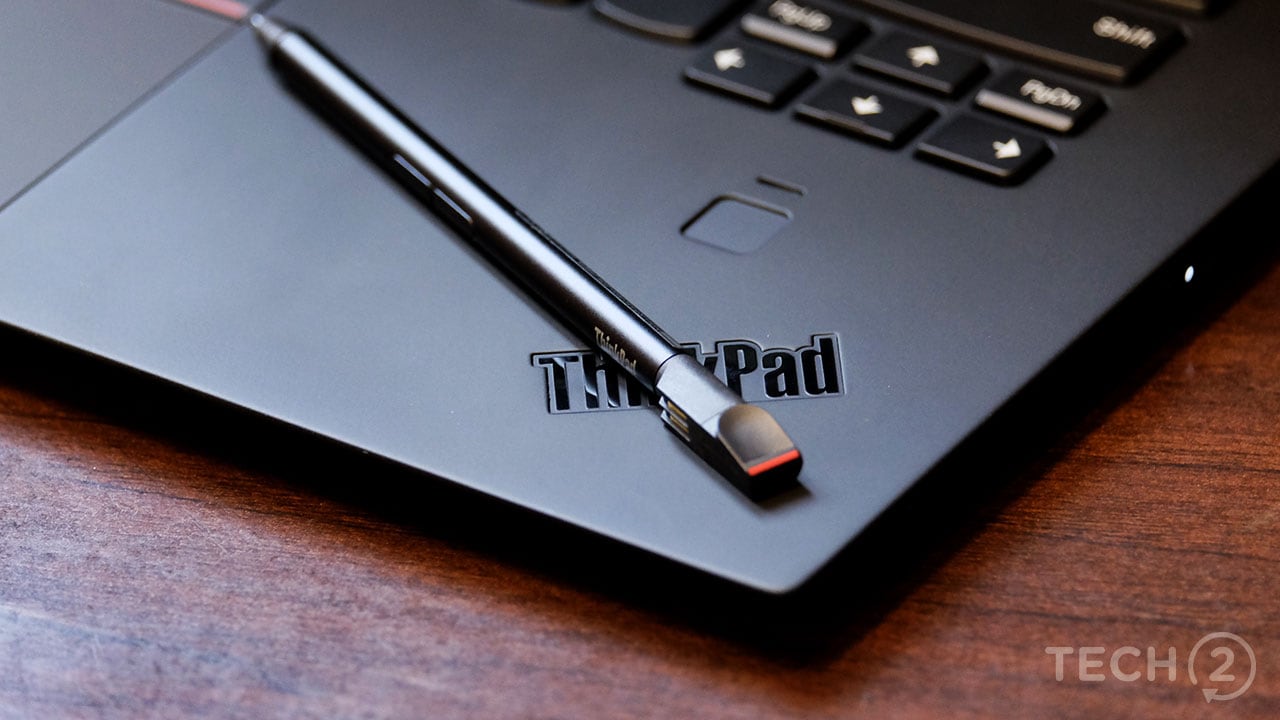 The X1 Carbon, in fact, both support a proprietary ThinkPad docking port for a ThinkPad desktop dock. Interestingly, while the overall shape of the port is proprietary, the connectors are not. The port simply uses a USB-C Thunderbolt 3 port alongside a micro ethernet port. Both ports are still fully functional with regular accessories and cables.

All the USB-C ports are Thunderbolt 3 compliant and can be used for charging. The regular USB-A ports can also deliver higher power for charging phones and such devices more quickly.

Both devices support Windows Hello, including an Infra-red webcam for face recognition and a fingerprint reader. Being ThinkPads, the devices also support anti-static fans that don’t attract dust and an “enhanced cooling system” which uses asymmetric fan profiles for better airflow. This is something I’ll be sure to examine in more detail once I get a review unit.

An interesting software feature is something that Lenovo is calling ‘Glance’. The Hello camera tracks your eyes and locks the screen once you look away. It can also be used to move windows between multiple displays just by looking at them.

Both displays are, of course, touch sensitive. The Carbon’s display seems matte-finished while the Yoga’s is glossy. I assume this is because the Yoga needs to work well with the stylus. Personally though, I preferred the more matte display on the Carbon. Both displays were very good, but I couldn’t help noticing a fair amount of backlight bleed as well. This also something I’ll check in more detail once we get a review unit. The Carbon’s display was an FHD unit (1920x1080), while the Yoga boasted of a higher resolution 2K display.

These devices are powered by Intel’s latest mobile CPUs so yes, the devices performed admirably in the little time I spent with them. I didn’t put much stress on the machines of course. Let’s see how they fare under our benchmarking.

With 360-degree mics included, Cortana should also be a breeze to access, but this was another feature I couldn’t test.

Am I excited? Hell yeah! I might sound like a fanboy, but this side of Apple, few devices are as exciting as Lenovo’s X1 range of ThinkPads. The only worthy competitors that come to mind are the Dell XPS 13 and the HP Spectre, though I doubt that both devices could match up to the mil-spec testing that the ThinkPads are said to endure.

Stay tuned for a full review of what could be the best Windows laptops yet.