If last year’s U11 lacked presence, this year’s U11 Plus is worse. It’s a good phone, but it’s pricing places means that it's competing with the Galaxy S9 Last year’s HTC U11 was a surprise winner for me. While everyone was going gaga over the notchy iPhone and Samsung’s, admittedly stunning, Galaxy S8 and Note 8, the U11’s simplicity stood out.

That simplicity also made a powerful statement. The phone was gorgeous, it was extremely powerful, and it had a camera to rival the best that Apple, Google and Samsung had to offer.

The U11 wasn’t the most flamboyant of phones, but as a complete package, it made a great deal of sense.

It’s now 2018. This is the year when the notch is popping up on every other Android phone, when tall displays are the norm and where svelte design is a standard feature. In this world, the recently launched U11 Plus is an oddity.

The U11 Plus is, quite simply, last year’s U11 in a larger body. Nothing more. The HTC U11 Plus' design is already looking dated. Image: tech2/Anirudh Regidi

The build quality is largely unchanged from the previous phone. The Plus is larger, and now features a taller 18:9 display, but that’s all that’s changed. The camera, the reflective metal and glass body, everything is still the same.

The volume and power buttons are on the right, the USB-C port and speakers are at the bottom. The ear-piece speaker doubles as a front speaker, giving a stereo effect.

The design is simple and there’s nothing specific that stands out other than the highly reflective finish. The phone is basically the epitome of the rounded rectangle that defined Android smartphones for so many years.

Given that the display is now taller, the fingerprint sensor has been moved to the rear, under the centrally-aligned rear camera. As with the previous phone, the LED flash sits beside the camera.

Since the phone is larger, however, going with the old design was, I think, a bad idea. Where the U11 felt comfortable, the U11 Plus feels almost bloated. It just feels a little more uncomfortable.

Last year, the Qualcomm Snapdragon 835 was the best chipset money could buy in the Android world. In 2018, we're not going to pay premium prices for last year's hardware. Despite being such a large phone, the U11 Plus doesn't include a headphone jack. Image: tech2/Anirudh Regidi

RAM and storage options remain unchanged with only a 6 GB / 128 GB model available in India. A 4 GB / 64 GB model is available globally.

The Pixel 2, launched last year, is the only other flagship in the market with an 835. But then again, it’s running heavily optimised software that gives it an edge in the market. And it’s cheaper.

One important upgrade with the U11 Plus is that it has an IP68 water and dust resistance rating. This means you can take this phone underwater and capture some impressive underwater shots.

The new 6.0-inch display is taller, but at 538 ppi, the effective resolution is unchanged. Given that the previous display was already good, this isn’t really a problem. However, do bear in mind that the similarly priced Galaxy S9 offers a slightly smaller, higher resolution and better-quality OLED display. You can check out the review of the Samsung Galaxy S9 Plus here.

Other features include Bluetooth 5.0 support, USB 3.1 over Type-C and a set of bundled USB-C headphones with active noise cancellation (ANC) support. The latter was included with the U11 as well. The display on the U11 Plus is quite bright. Too bad it's not an OLED. Image: tech2/Anirudh Regidi

In terms of colour accuracy, the display is as good as it was on the U11, but it’s not even in the same league as the stunning OLEDs on the Galaxy S9.

The display is protected by Corning Gorilla Glass 5 and is accurate enough for an LCD, but Apple’s LCD iPhones (the 8 and the 8 Plus) offer much better accuracy.

Offering Android 8.0 Oreo out of the box is a big plus point in favour of the U11 Plus. HTC’s Android skin is also closer to stock Android, which is nice.

Many of 8.0’s notable features, including notification dots and split-screen multi-tasking are present. 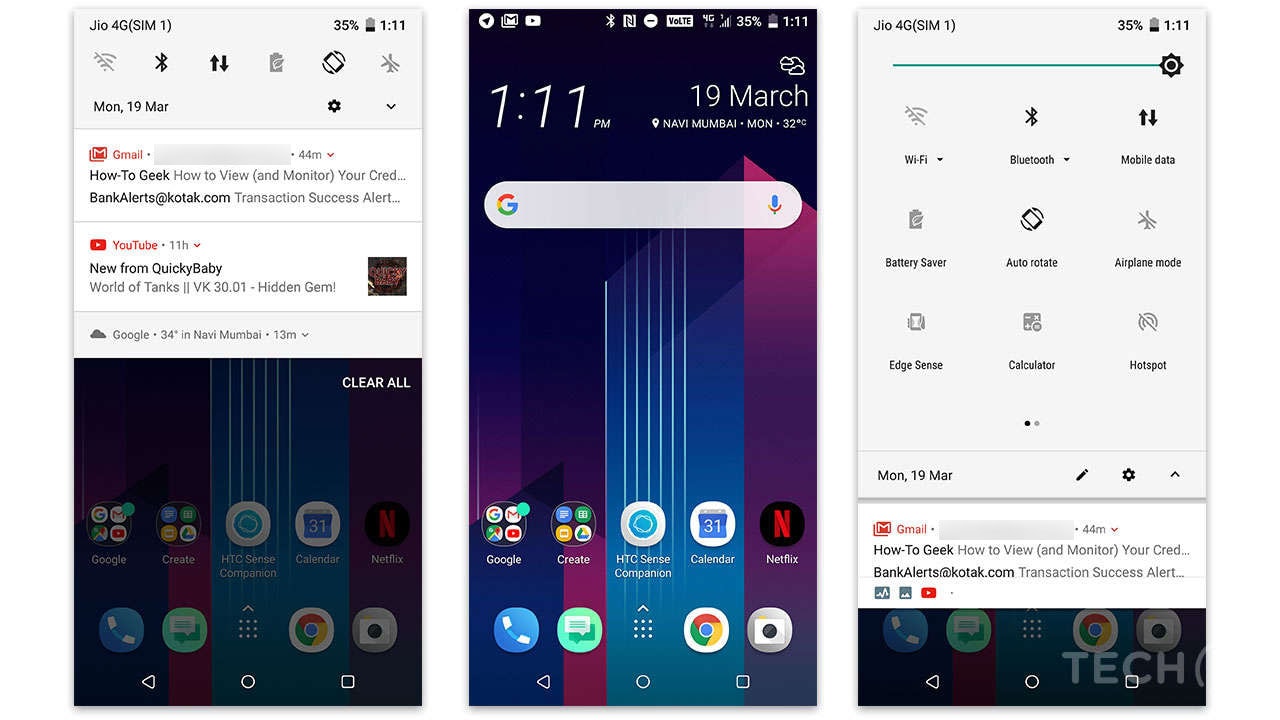 The UI is the same as we saw last year: Near-stock Android with mild HTC skinning. Image: tech2/Anirudh Regidi

As mentioned in the U11 review, HTC’s in-house AI assistant, Sense Companion is included. It’s not particularly useful, but it’s also less intrusive than Samsung’s Bixby.

HTC Sense is still either totally useless or vaguely interesting depending on your usage. It can integrate your social feed, making it useful for such activities, but it also offers up many ads.

A few assorted apps like NewsRepublic and Boost+ are part of the package. They’re not notably better than similar apps on the Play Store.

Versus the Galaxy S9, the software is better only because it’s smoother. Any design advantages are only debateable.

Edge Sense, where you squeeze the phone to make it open apps comes to the U11 Plus, but it’s as debatably useful on the U11 Plus as it was on the U11. It’s a nice option to have, but it’s still not markedly more useful than it was last year, and you won’t miss it if you don’t use it. For more information, simply head to the U11 review.

Subjectively, the performance of the U11 Plus was great. Everything was quick to respond and animations were always fast and fluid. Gaming performance was also great and there was never any lag or overheating in even demanding games like Asphalt and Modern Combat.

Benchmark performance, while not necessarily an indicator of real-world performance, was a bit surprising. For whatever reason, the Android Oreo-powered HTC U11 Plus was slower than the Android 7.1.1-powered U11 with the same hardware. Since I didn’t test the U11 after its upgrade to Android 8.0, I don’t know if this performance deficit is a result of the update or some sort of thermal issues with the U11 Plus.

For regular users, this is irrelevant though. The only cause for concern here is that you’re paying a premium for last year’s hardware, which hardly seems fair.

Performance in the audio department was exceptional. The speakers are loud and the bundled headphones, while still missing dedicated volume control buttons, sound very good. Significantly though, the Galaxy S9 sounds better.

Call quality and signal strength were never an issue.

The camera setup on the U11 Plus is puzzling and seems like a step down from that of the U11. The camera continues to be as good as it was last year, but the likes of Huawei, Samsung and Google have already taken camera technology to the next level.

Basically, the HTC U11 Plus still has an excellent camera, it’s just not as exceptional or as interesting as the ones on the similarly priced Google Pixel 2 or Samsung Galaxy S9 or the Huawei P20 Pro.

Given that the phone is larger, I was at least expecting to see a dual-camera setup, something to differentiate this phone from the older model.

The downgrade to the front camera resolution isn’t significant in real world use. The images are at least as good as they were on the U11. Battery life was exceptional, but that's to be expected from a device of this size. Image: tech2/Anirudh Regidi

Given the size of the phone, I would have been disappointed if battery life wasn’t exceptional. Thankfully, it is. With 11 hours on are standardised test and almost two days in real world use, this is easily among the longest lasting phones I’ve used.

On average, my daily usage involves a screen-on time of 6-7 hours, which includes a couple of hours of video while commuting, several hours of music, a few hundred messages and emails and a dozen or so calls.

If last year’s U11 lacked presence, this year’s U11 Plus makes things worse. It’s a good phone, but it’s pricing places it in direct competition with, at the very least, the stunning Samsung Galaxy S9.

At the same price, you’re getting a phone with fewer features, an older chipset, a bulkier phone, a worse display, a less capable camera, better battery life and better software.

Given the state of the competition now, it’s hard to fathom how the U11 Plus could even compete and why anyone would buy it.

It would be a rather stubborn person indeed who’d want a U11 Plus over a Samsung Galaxy S9 or Google Pixel 2. The U11 Plus is a good phone, but it's no flagship.