While smartwatches may not be on the decline, it's quite possible those powered by the Snapdragon 2100 chip are Are smartwatches on the decline? It all depends on which surveys and reports you've been reading, but the safest response to that question is that the jury's still out.

With that in mind, here's a look at Fossil's fourth generation variant of the Explorist model of Wear OS smartwatches.

Just like Fossil's earlier offerings, the fourth generation Explorist HR comes in a variety of case colours with an even larger array of metal-link, silicone and leather straps. The model we reviewed was the black case variant with a black silicone band. With a case that's 45 mm wide and 13 mm thick, the watch weighs only around 70 grams — strap included. The previous version of the Explorist we tested weighed around 100 grams heavier and that was because of the metal-linked strap with which it came. And while the usual disclaimer to those with thin wrists must be issued, Fossil is on its fourth generation of smartwatches, and if the fact that its large and somewhat bulky designs don't make it a very elegant accessory for those with petite wrists wasn't clear enough already, it should be by now.

While previous generations of this watch boasted some amount of water resistance, this one is submersible to up to 30 metres (3 ATM), which means you can take it for a swim. And the Explorist HR sits comfortably feather-like on your wrist to allow you to pull off your best butterfly stroke unhindered and unencumbered. The other major addition this time around is the presence of the heart monitor on the underside of the watch. The Fossil Explorist HR comes with a heart rate sensor on the underside of the watch. Image; tech2

To quote the review of the third-generation Explorist, "The crown — located at the 3 o’clock position — acts as a power/home button when pushed and when turned, lets you cycle through menus. This is a refreshing change from smartwatches featuring crowns that serve no real purpose. Said crown is flanked on both sides by buttons that serve the function of taking you to a Fossil-specific menu (where you can save custom watch faces, etc) and as a back button. None of these, it must be noted, dig into or cause any discomfort to the back of your palm (if you wear your watch on your left wrist)." Very little has changed here. 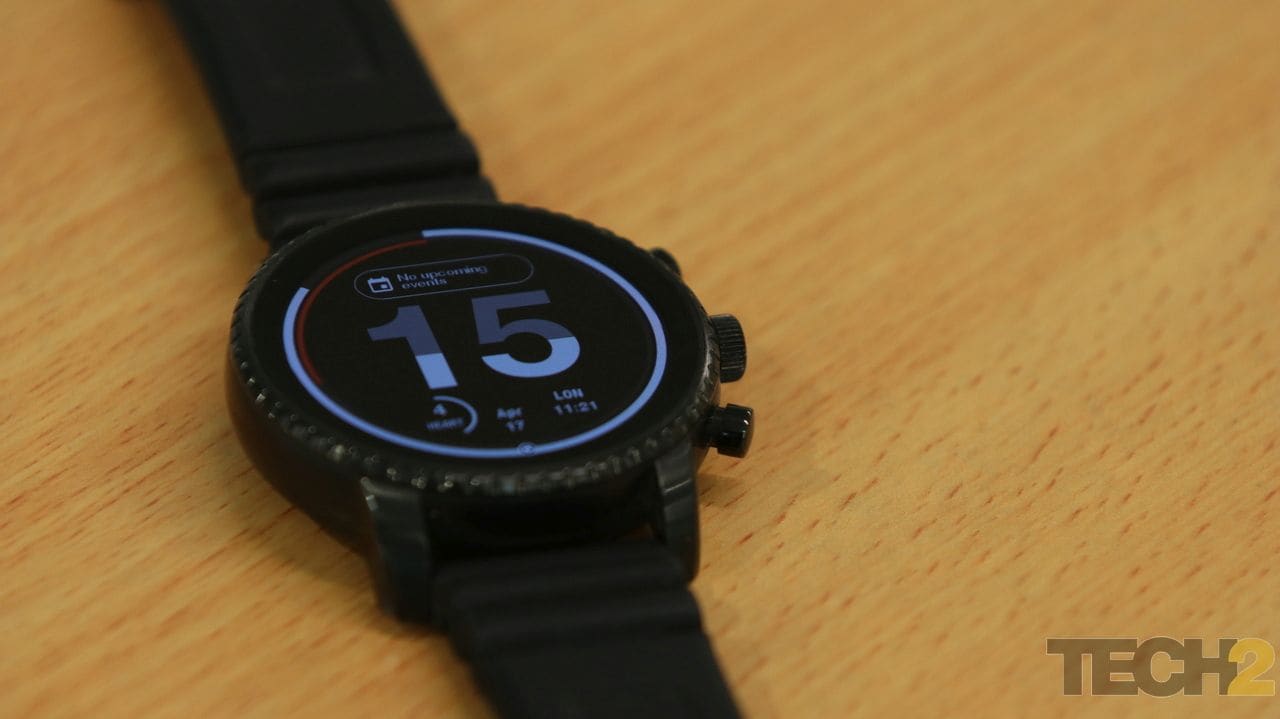 A 35.5 mm screen on a 45 mm case — the screen has remained the same size while the case has been shaved down by one millimetre — takes last edition's design strengths and runs with them, with the sloping bezels giving the appearance of a larger screen. Unlike the size of the casing, the 454 x 454 pixel AMOLED screen is something that hasn't been upgraded since the previous generation of Explorist smartwatches.

So far so good. But problems start off when you see that the watch is fitted with a Qualcomm Wear 2100 chip, which was outdated even in the previous version of the Explorist. This is a 2016 chipset. That the Fossil Sport Smartwatch that was released a little while after the Explorist HR is loaded with the present generation Qualcomm Wear 3100 chip is a little disappointing. Could Fossil not have waited a little while longer to push out the Explorist HR, and have it fitted with the 3100 chip? On the plus side, NFC and built-in GPS are two of the notable new features this time around.

Moving on, 4 GB of storage is another standard, although at no point in my history of using smartwatches have I encountered the need for anything close to that much storage. It's been stated in the past that Fossil uses alkali-aluminosilicate sheet glass for its touchscreen, which as has been also noted in the past is sturdy, but prone to fingerprints and smudges all over it. Things are no different this time around. 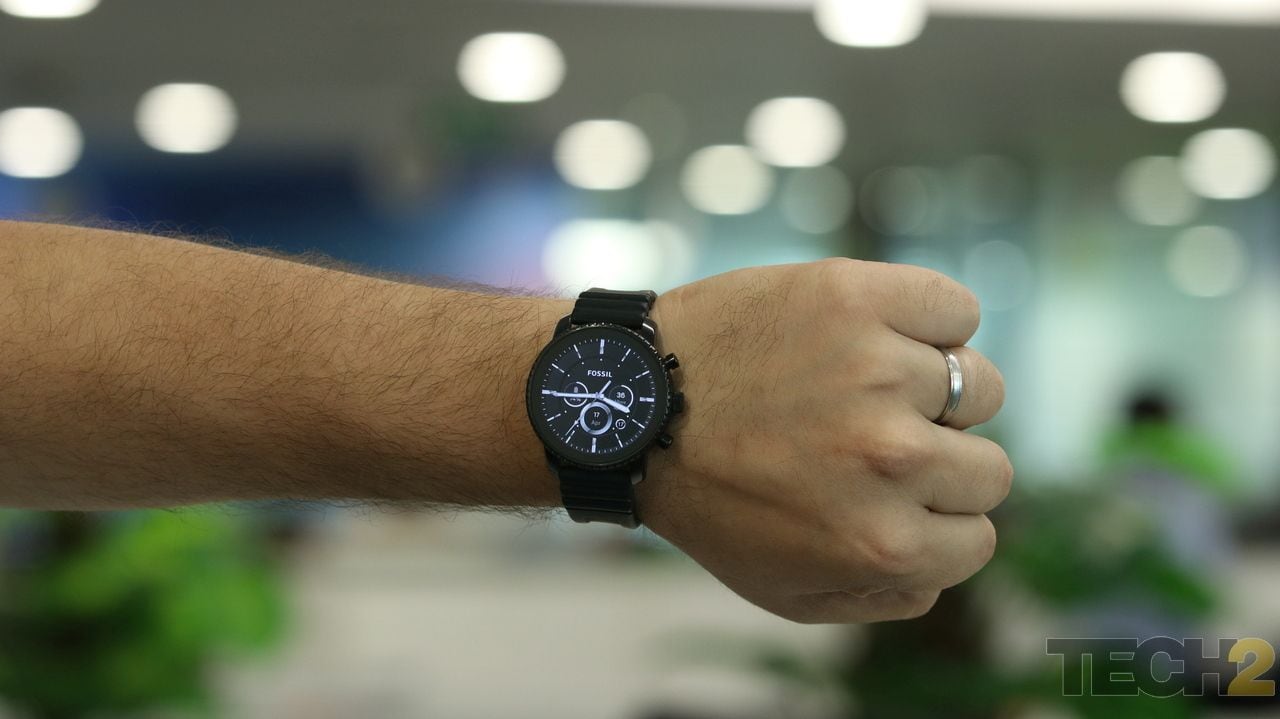 The onboard speaker, microphone, accelerometer and gyroscope are also industry standards, but by introducing a heart rate sensor, Fossil has finally covered all its bases and ventured into the territory (with the Google Fit app) where it had found itself left behind by the likes of Apple, Samsung, Garmin and so on. Connectivity comes in the form of Bluetooth 4.1 and Wi-Fi 802.11 b/g/n standard.

Fossil sticks to its tried and tested magnetic disc to recharge the Explorist HR's battery. It takes anywhere between 90 minutes and two hours for a full charge, which is fairly brisk.

The Explorist HR arrives preloaded with Android Wear 2.0 OS — and takes little time to update to the latest version (2.6, if I'm not completely mistaken) once connected to the internet. Wear OS hasn't moved along in leaps and bounds over the years, so it would be unfair to judge the Explorist HR on its inadequacies or slightly obsolete UI, particularly in the menus. It would, therefore, be downright criminal to judge Fossil's watch on the increasingly sassy, inappropriate and downright rude (at times) auto-responses Wear OS generates for SMSes and WhatsApp messages.

For example, I had the opportunity to auto-respond with an "I'll think about it" to my editor's orders about changing a headline.

The first was when firing up the device for the first time.

The second came when the Explorist HR was blighted by repeated instances of the Bluetooth link with the phone being severed, for no ostensible reason.

The third came when the touchscreen of the Explorist HR would arbitrarily and inexplicably refuse to respond to any touches or gestures — it was almost as if the device had decided to go on strike. 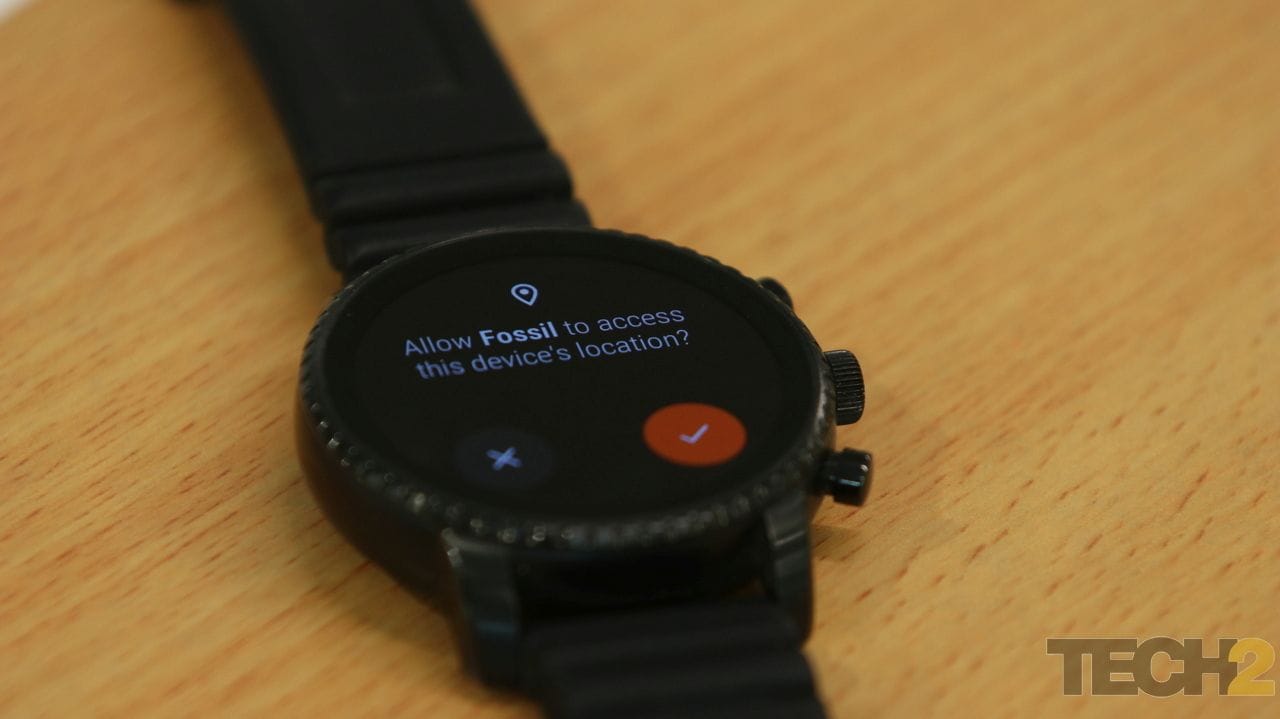 The fourth came after the previous phenomenon was experienced once more; but this time, phantom notifications, ie. those I'd dismissed or acted on via mobile phone a while ago, began popping up.

The fifth came when the previous symptoms seemed to have been cured, but the Bluetooth link began to be severed again and again... once again, inexplicably.

Except during the spells when the Bluetooth link refused to reconnect, after the watch and phone were reunited (having been too far apart for a while), the watch was capable of restoring Bluetooth connectivity as soon as possible.

Even when there weren't any obvious problems affecting the device, the Explorist HR's performance was underwhelming at best. Although the speed of app transitions or apps loading up wasn't the slowest seen, it was noticeably slower than expected or compared to the previous edition of the Explorist at any rate. This was still not as big a problem as the touchscreen's stubborn unresponsiveness and sluggishness. Multiple taps on the same option and repeated swipes of the same notification were de rigueur for the device reviewed. (Note: It's possible this isn't something that affects all Explorist HR smartwatches).

Onto the positives, voice recognition as always is very accurate. The heart rate sensor performed well when compared to the readings provided by a Fitbit device. NFC on the device, when using Google Pay at least, was a smooth and speedy affair.

Unfortunately, all of this paled in comparison to the inconvenience caused by the glitches and unresponsive screen of the Explorist HR.

The device is said to contain a battery that gives a day's worth of battery life — that is, according to all the official literature available about the watch. This is actually an understatement because the device was found to give 32 to 35 hours of battery life (accounting for the watch being worn while sleeping) with medium to heavy use. And with judicious use of battery saver mode and switching off Always-On Display, the battery life could be dragged to at least two days.

The battery life is a definite positive for the Explorist HR.

The Explorist HR retails at around Rs 21,999 and with the new features under the hood — built-in GPS, heart rate monitor, NFC capability — and a vastly improved battery life, this should be the real deal. Unfortunately, a very outdated processor and extremely poor performance — without speculating on whether at all those two aspects are linked — means this is an eminently missable device and perhaps you would be better served to wait for one that is powered by the Snapdragon 3100 processor.

While smartwatches may not be on the decline, it's quite possible those powered by the 2100 chip are... especially if the Explorist HR is anything to go by.