Fossil Q Explorist review: Succeeds where plenty of its peers have failed

After some disappointing outings, Fossil has finally turned out a smartwatch that is almost a must-buy Having tested out the Fossil-manufactured Michael Kors Access Bradshaw in the recent past, it was with some trepidation that the Fossil Q Explorist was approached. After all, the patchy performance of what was, quite clearly, intended to be a flagship device left little hope for much of an improvement. 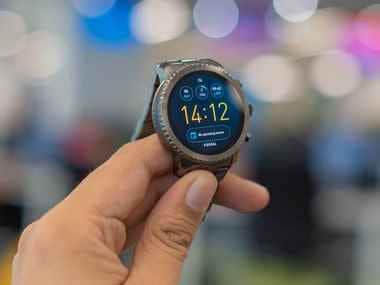 The smartwatch market has turned increasingly crowded in 2017-18 and so, it was essential for Fossil to churn out a successful device. Is the Explorist that smartwatch? Let’s find out.

Available in a variety of dial colours — black, stainless steel, smoked steel, gold and blue — and a plethora of metal-link, silicone and leather styles, the model we reviewed was the smoked steel variant with a metal-link band. Just like the Bradshaw, beneath the Explorist’s premium packaging lies a 170-gram (roughly) behemoth that is built like a tank.

The watch measures 46 mm across and is around 12 mm thick, sporting a 22-mm wide band — with a plethora of options and styles available on the market, as is the industry norm. Also, as noted with the Bradshaw, looks can be very deceptive, because despite how chunky it may look in your palm, it’s perfectly weighted and sits remarkably light on the wrist. 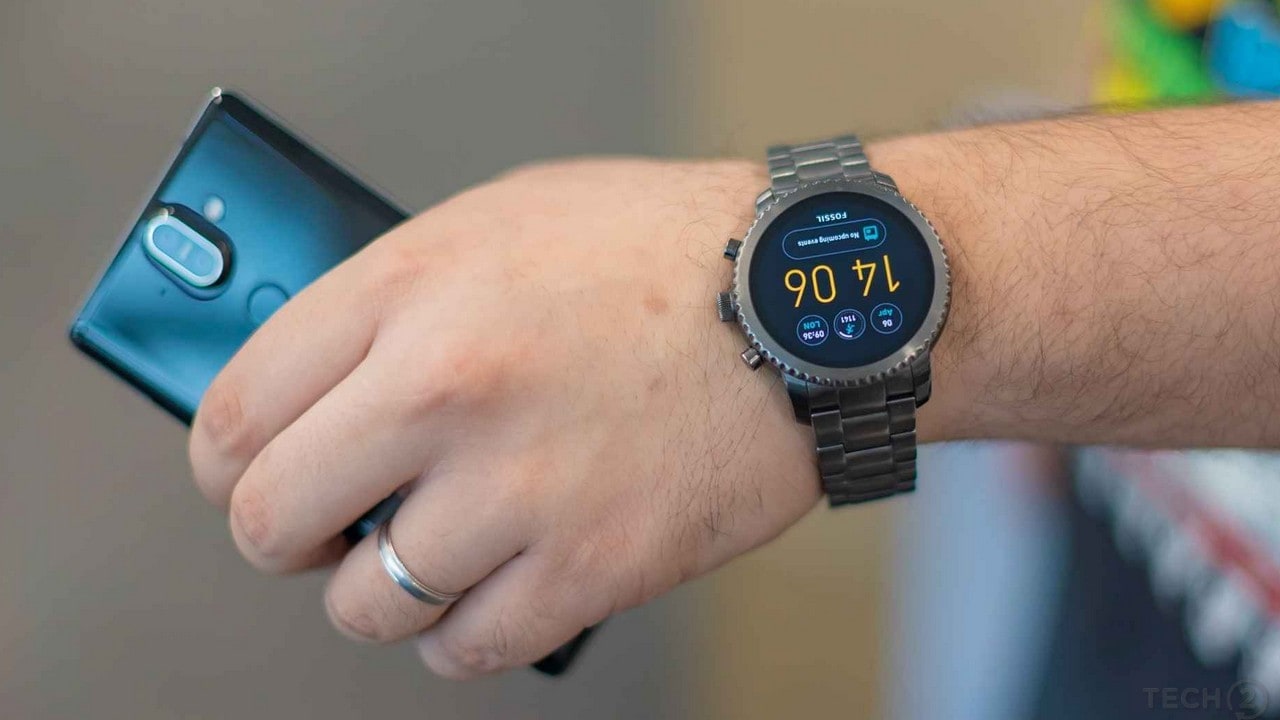 A word of warning though: This isn’t a smartwatch for those with slender wrists. It just looks wrong. The large blocky links on the default stainless steel band are sturdy and can take quite a beating, much like the watch itself, which is built like a veritable tank. Further, its IP67 rating means that you don’t have to worry about it getting wet. You can probably wear it while swimming, but why someone would wear a watch like this while swimming is a question that can and probably should be raised somewhere else. The crown — located at the 3 o’clock position — acts as a power/home button when pushed and when turned, lets you cycle through menus. This is a refreshing change from smartwatches featuring crowns that serve no real purpose. Said crown is flanked on both sides by buttons that serve the function of taking you to a Fossil-specific menu (where you can save custom watch faces, etc) and as a back button. None of these, it must be noted, dig into or cause any discomfort to the back of your palm (if you wear your watch on your left wrist). A 35.5 mm screen on a 46 mm case — exactly like the Bradshaw — no longer comes with the concern that wide bezels would overshadow the watch screen. In fact, the slight slope on the bezels give the 454 x 454 pixel screen ample room to shine. And shine it does. Bright, sharp, vivid and devoid of the infamous ‘flat tyre’, the display is one of the hallmarks of this digital timepiece. If you happen to watch a video on your wrist on the Explorist, you’ll instantly see where the extra pixels have gone.

The watch packs a Qualcomm Wear 2100 chip — a now fairly outdated processor — and has 4 GB of storage. Fossil uses alkali-aluminosilicate sheet glass for its touchscreen, which as has been noted in the past is sturdy and takes a licking but keeps on ticking, however, is prone to fingerprints and smudges all over it. The onboard speaker, microphone, accelerometer and gyroscope are par for the course, and so too is the absence of the heart detector. By now, it’s fairly clear that this watch (and its ilk) are not meant for being worn during exercise, so tracking heart rate isn’t really a priority. Connectivity comes in the form of Bluetooth 4.1 and Wi-Fi 802.11 b/g/n standard.

The Explorist’s 360 mAh battery — like most Fossil offerings — is charged wirelessly with a magnetic disc (which you obviously have to plug into the power socket) that for the large part, sticks efficiently to the watch. It takes anywhere between three to five hours for a full charge, which isn’t too shabby.

The Explorist came preloaded with Android Wear 2.0 OS — and took like a fish to water to the updated Wear OS. There’s very little to differentiate the way the software works on this watch, compared to other watches, so we won’t dwell too long on it, suffice to say that there are no complaints.

The OS, however, needs a massive redesign to bring it into 2018, which is a topic for another day. As the OS hasn’t changed fundamentally, the introductory paragraph to this section doesn’t need to either:

“Setup is a very simple matter — particularly if you've already got Wear OS app installed on your phone. And for the large part, sorting through the list of which notifications you wish to receive (and which ones you don't) is equally facile. The tutorials are user-friendly and if you haven't used an Android Wear device before, they explain the full arsenal of gestures at your disposal very well,” as spelt out in the Bradshaw review.

One important factor of this particular review needs to be raised at this point. A large number of smartwatches tend to put in sprightly performances in their first month of use, only to slow down over time. With this review, a conscious decision was taken to test out the Explorist for a longer period of time — around 100 days — to get a better and more representative idea of the smartwatch’s performance.

Over the course of the first week, everything proceeded as expected. A responsive OS, a screen with the right amount of sensitivity, quick loading times for apps and accurate voice detection was de rigueur. Notifications, if tapped, would quickly transform into the full (or almost) message and if swiped, would disappear instantaneously.

The only problem faced performance-wise — which cost the Explorist a point in this category — was encountered at the one-month mark when the Bluetooth link between the smartwatch and phone severed and refused to re-attach. It took a factory reset — followed by the slightly annoying process of reinstallation of all apps and updates — to bring things back to normal and since then, no problems were faced.

‘Phantom calls’ — ie the vibration and onscreen options to reject or accept a call, after the actual call has ended — were non-existent, just like missed notifications or false notifications.

The instance of Bluetooth severance — noted above — notwithstanding, if the watch and phone were too far apart for a while, the watch was capable of restoring Bluetooth connectivity as soon as both devices were back in range. No matter the quality of a smartwatch and the clutch of features it packs, battery life is often a make-or-break factor. And while 360 mAh should ideally last close to 24 hours, the best the Explorist could give me was 18 hours before requiring a charge.

This isn’t as bad as you’d imagine, when you consider that it was after over 18 hours of medium to heavy use that the battery eventually drained down to zero. One way of looking at this is that you need to charge it every night.

Another way of looking at it is that you can be sure that you won’t find it switching off on your way home from work/college/school (wherever it is you wear it).

With lighter and more sparing use, I found the battery capable of still being at 20-odd percent a whole 24 hours after being charged. Switching off background apps or certain notifications buys you a little more juice.

Low battery life is a problem with which all touchscreen-based smartwatches will and do grapple, so it was a pleasant surprise to see the Explorist manage the situation a little better than its competition. 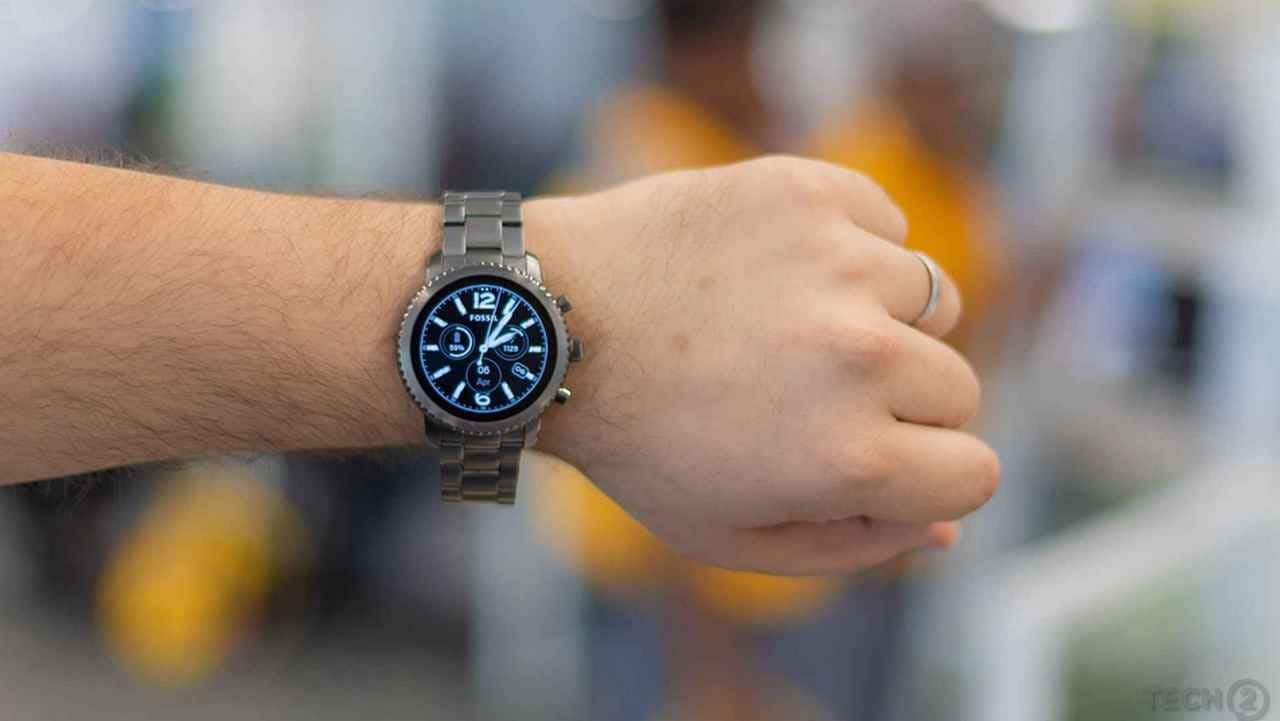 The Explorist retails at around Rs 19,999 (with a leather band) to Rs 21,999 (with the steel links). This is by no means cheap, but for its aesthetics and performance, the cost seems fair. It looks very good, performs well and is incredibly sturdy. It could be argued that a larger battery would have made it a must-have wearable, but sadly, that’s not the case.

After some disappointing outings, Fossil has finally turned out a smartwatch that is almost a must-buy. And in a still-fairly-superfluous domain like wearables, this is high praise indeed.