YouTube also is the default destination for most Indians to access music. Yes, there has been an explosion of music streaming services in the last few years. But much before any of these streaming services, came on the scene in India, YouTube was the destination you went to, to listen to music. T-series, an audio company, is so popular on YouTube that it is in a fight to take away the most subscribed channel throne from PewDiePie.

What I am trying to get at is this: Music streaming on YouTube has been a thing for quite a while now.

So it was only natural for YouTube Music, already released internationally, to make its way to India, now that almost every other music streaming service of importance is here. Yes, Google Play Music has been around in India, but it hasn’t created as much of a dent in the audio streaming space here. The timing of the launch of YouTube Music, comes within a fortnight of Spotify India launch. If you are a music lover, you had Gaana, JioSaavn, Apple Music, Google Play Music, Prime Music and Spotify India to choose from. Now, you can add YouTube Music to that list.

YouTube Music is a music-focussed service available in the app form for Android and iOS as well as on the web. It offers official songs, whole albums, playlists, artist radio and even the many covers created by the YouTube community. YouTube Music is available in an ad-supported free format or an ad-free YouTube Music Premium or YouTube Premium subscription. The Premium subscription offers you the chance to listen to music in the background as you go about accessing your other apps or even locking your phone as you go for run.

YouTube Music app is available on the Google Play Store, the Apple App Store as well as on the web. In addition to audio, you do get the option to play video files as well, wherever applicable. But don’t go and look for those short news documentaries on YouTube Music, you won’t get that. The focus here is on music. While, you do get the free version of YouTube Music, it will be bombarded with advertisements. If you are a Google Play Music subscriber, you will get YouTube Music Premium membership as part of your subscription each month. 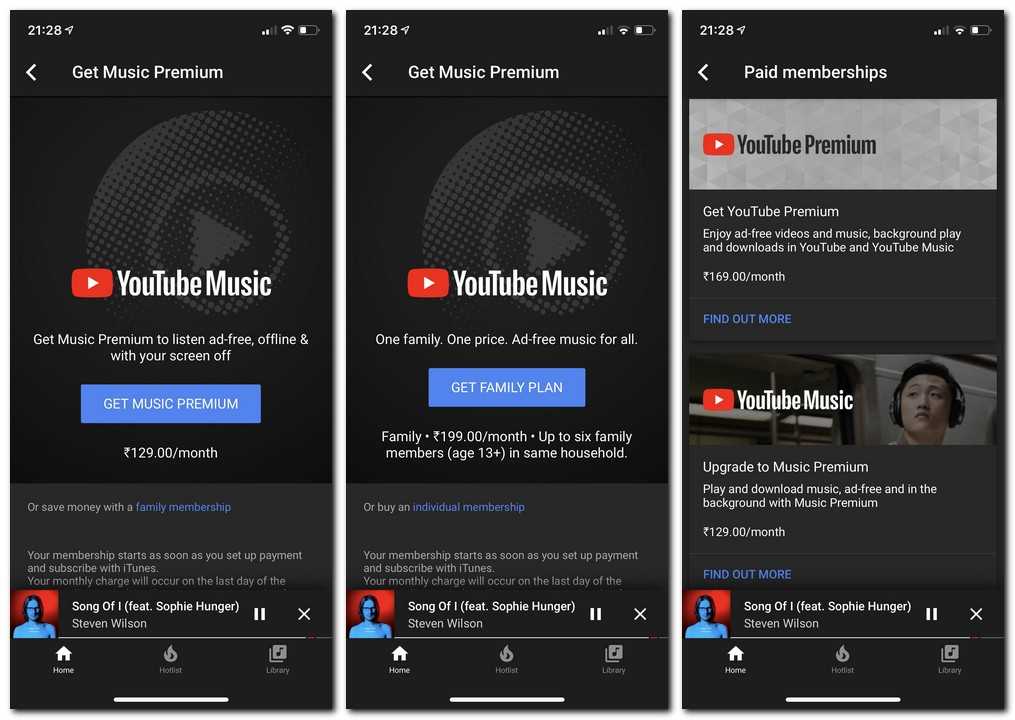 Various pricing plans on the iOS app, which is pricier than buying it on the web. Image: tech2 With so many music streaming services around, you may be wondering what’s different on YouTube Music that’s not already there on Google Play Music. During the startup process, which took me through the familiar screens such as selecting your language, then selecting your favourite artists, I was thinking to myself, what’s new here? 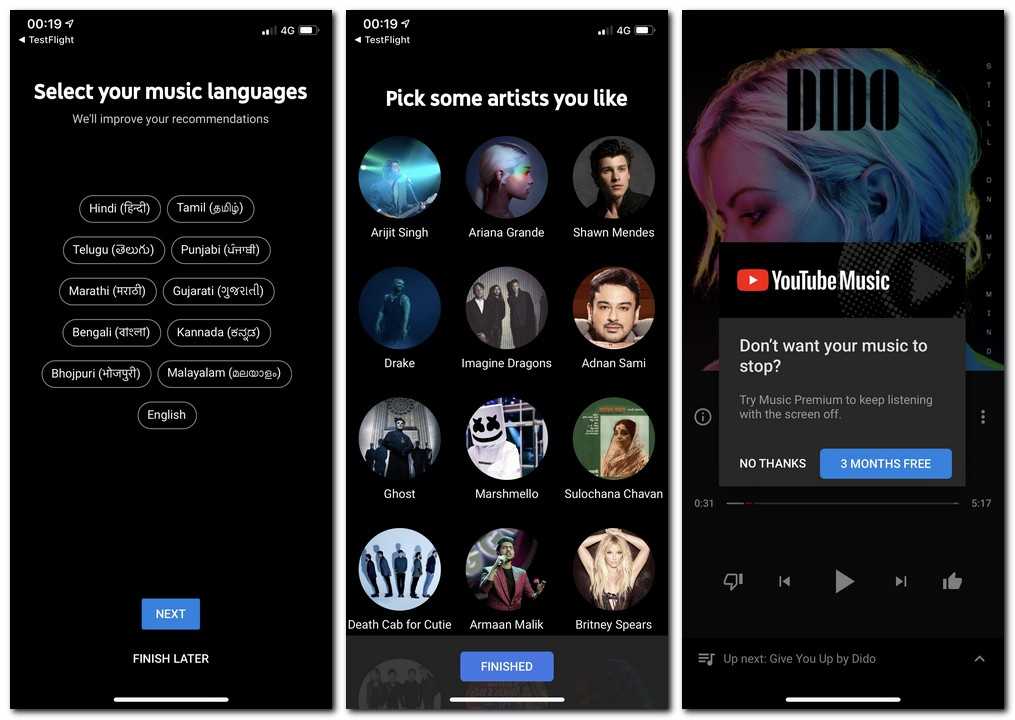 The starting pages of YouTube Music look quite similar to any other audio streaming service. Image: tech2

As I started using the service, the differentiating factor started to become apparent. YouTube has a community of creators, a lot of them create music just for YouTube. These creators may or may not be on other platforms, but here they are all available. If you are someone who likes indie artists and love listening to cover versions of your favourite songs or TV/movie themes, by YouTube creators — you can access that music here.

A lot of the times, music streaming apps will only have the recorded versions of songs. But we all know that some artists sound wonderful during their live performances which leads itself well to improvisations. The Red Hot Chilli Peppers’ Slane Castle concert being a case in point, or any of Steven Wilson’s live acts. These generally get uploaded by these artists on their YouTube channels, but rarely, if ever, make their way to audio streaming platforms. With YouTube Music, you can not just listen to it but with a subscription plan, even take that music offline. YouTube hasn’t given us an exact number of songs available on this platform, but considering it is tied in to YouTube, there could be millions, not counting the many covers, reimaginations of these songs and music by the YouTube creator community.

I listen to a lot of synthwave music when I am working. There are many playlists on YouTube for synthwave and lo-fi music, which I find really good for concentrating when writing long pieces such as this story. Over time, I have started enjoying listening to these indie artists, but YouTube is the only place I could access them. With YouTube Music, I have the option to listen to those same playlists, and even download them on my phone as I go for a run or just want to hear it for fun.

The differentiating factor that YouTube Music brings to the table is its music creator community, which seamlessly translates on to YouTube Music. If you have been using YouTube as much as I have, you may have been shocked at how well YouTube gets your tastes. That will most likely happen on YouTube Music, as it already builds up on that legacy of data that YouTube has got so good with. If you are logging in with your Gmail ID that you use on YouTube, YouTube Music is already aware of your tastes based on your likes and channels you have subscribed too. It can only get better from there.

Of course, it is too early to make any judgement as Spotify and Apple Music are also renowned for their recommendation engines. But as with all things Google, YouTube Music definitely comes with that advantage baked in.

Navigating the YouTube Music app is pretty straightforward, if you are familiar with music streaming apps. 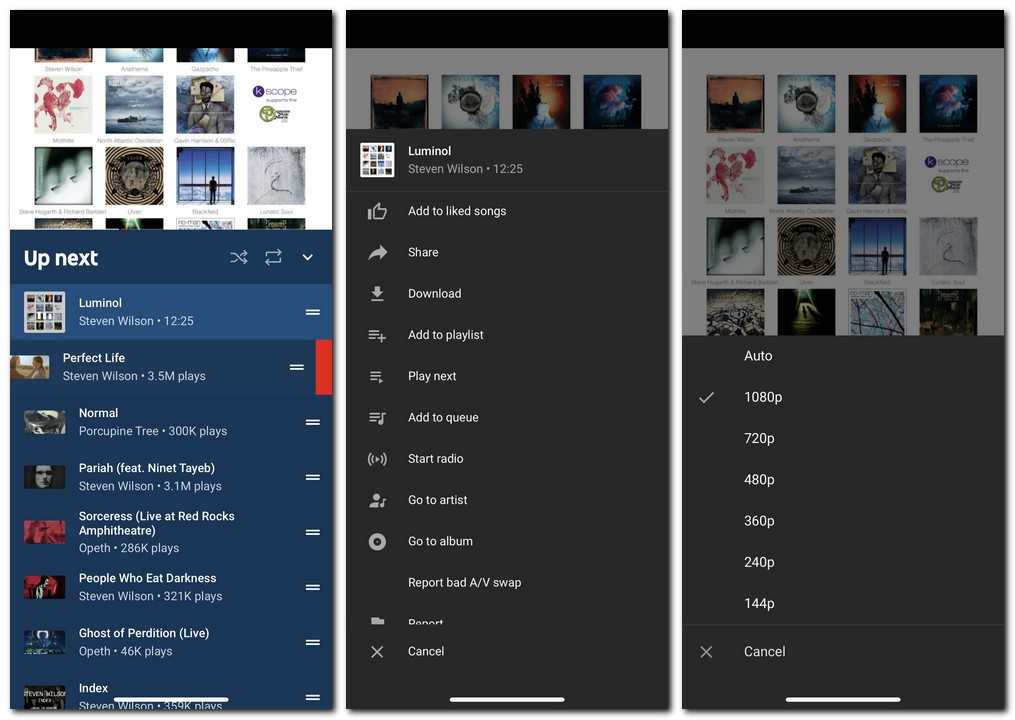 The options offered inside playlists and quality selection. Image: tech2

The app is divided into three basic tabs: Home (which is the page you will be interacting with the most), Hotlist (which has the trending videos which is pulled from YouTube) and Library (which has your Last Played songs and a drop down for Downloads, Playlists, Albums, Liked Songs, Artists).

The home page is a jumble of a lot of things, and honestly, I found it a bit overwhelming. If my Google Podcasts is any experience to go by, the homepage will keep changing as you keep using YouTube Music, with the recommendation engine kicking in and adjusting which playlists you see. If you have your location activated, you may even see a 'Gym playlist', if the app identifies that you are at your local gym. Thank heavens, YouTube Music decided to use larger album arts by default, else I shudder at the thought of how congested things would look. 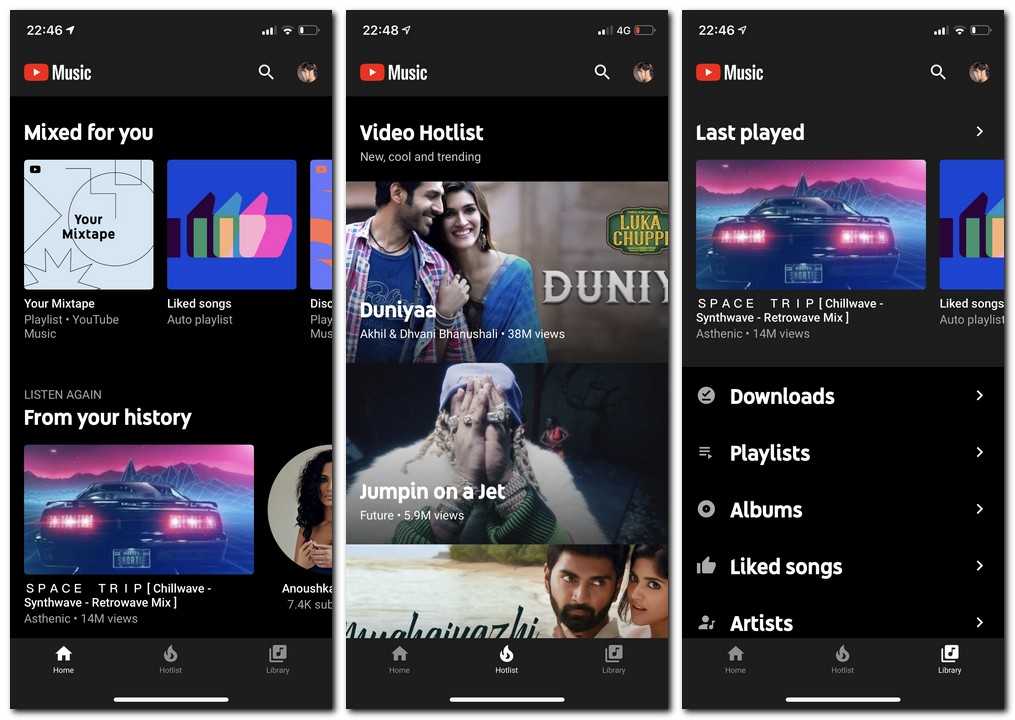 You can also use search terms such as “George Michael song with saxophone” (Careless Whisper), “Live at Slane castle” (Red Hot Chilli Pepper’s concert) or “Marathi song sung by Rafi” (many to choose from) to hunt for music. The search results are divided into Songs, Videos, Playlists, Artists and Albums. This contextual search is definitely a plus point. There is no way to know the bitrate at which the songs are playing. YouTube Music shows you resolution options when you tap on Quality, the same that you see with videos. I will have to spend considerable time on this app, using good quality headphones to be able to decipher the difference in sound quality. Of course, a lot of songs which may not be from the artist herself, especially live concerts recorded by fans, may not have the best audio quality.

Just like many of us use YouTube for music, there are others who listen to a lot of talks or conversations on YouTube which they would rather have an audio version of. Not all of these videos may have a podcast equivalent (such as Tim Ferriss or Joe Rogan's podcasts which have a video version on YouTube and audio versions on the many podcast apps). Moreover, podcasting is still a niche industry in India, so many users may not have another choice but to watch audio-heavy content on YouTube instead of just listening to it as an audio file. Unfortunately, YouTube Music is not for that audience.

Music aficionados are spoilt for choice

With all the major music streaming services now available in India, this is a goldmine for music enthusiasts. YouTube Music has come late to the party, but with a proven record with the main YouTube app, it shouldn't be that difficult for YouTube Music to get people interested. Familiarity with YouTube means that the learning curve isn't that steep for a lot of non-tech savvy users. In fact, I wouldn’t be surprised if there is a YouTube Music ‘Go’ version launched at the next Google India event, to get even more people on board.

The battle lines have been drawn — YouTube Music vs Spotify India vs Apple Music vs JioSaavn vs Gaana vs Prime Music. We will be doing more in-depth stories comparing these music services. But for now, YouTube Music is certainly worth trying out and is definitely not as confusing as Google Play Music was, when it came out.

Disclaimer: JioSaavn is owned by Reliance Industries which owns Network18, the publisher of Firstpost and tech2