Check out if Xiaomi Redmi 5A offers a substantial upgrade over the 4A and manages to maintain the winning formula.

Xiaomi India has launched its latest smartphone, the Xiaomi Redmi 5A in the Indian market on 30 November 2017. The company has priced the lower variant with 2 GB RAM and 16 GB internal storage at Rs 5,999, but the first 5 million customers can get the smartphone for a price of just Rs 4,999. The Redmi 5A is the successor to the Redmi 4A which was launched earlier this year in the Indian market. We reviewed the Redmi 4A and concluded that it was ‘one of the best entry-level smartphones’ in the market at the time of writing.

This new smartphone has managed to retain that title for Xiaomi because of its competitive pricing and great value-for-money hardware. While the phone has launched a mere seven months after the 4A, unlike last time, the 5A arrives mere weeks after its China launch. The company launched the 5A in the Chinese market back in October and it is bringing it to the Indian market just after one and a half months. The 4A arrived several months later.

Xiaomi sent us the Redmi 5A for review and I have been using the device for almost half a day now. Does the 5A offer a substantial upgrade over the 4A and manages to maintain the winning formula by Xiaomi? Here is what I think about the Xiaomi Redmi 5A.

Xiaomi has made some minor changes when it comes to the design of the Redmi 5A when compared to its predecessor. The device looks a bit premium with its 'metallic matte finish' rather than the plain matte finish in the 4A. The material used in the construction is polycarbonate with dual graphite sheets. The edges of the smartphone have become much more rounded and refined when compared to the previous generation. The 5A does not feel like a flimsy and delicate device and feels good and sturdy in hand. 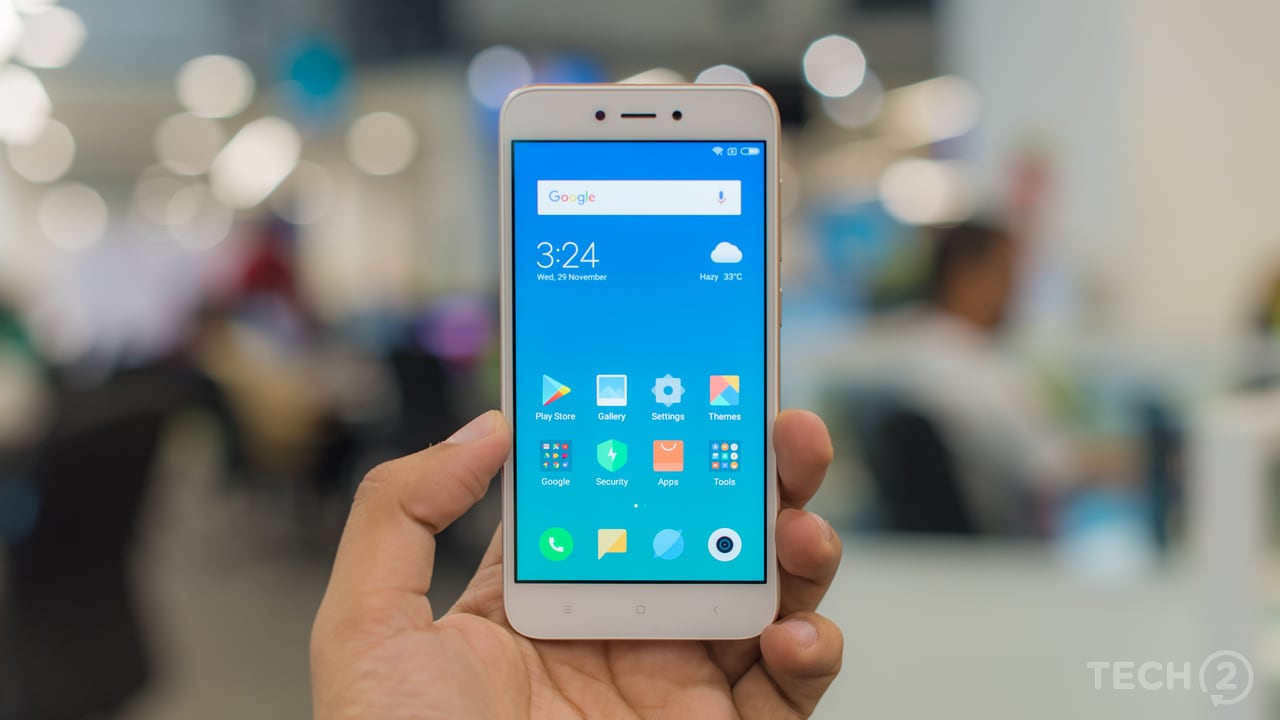 The device does not offer anything new when it comes to the design aspect and looks like any ordinary Android-powered smartphone. The finish can confuse users into thinking that the device is made of metal. The material on the back and sides look like plastic to me, but I am not too sure despite a close inspection of the device. It looks and feels more like a mid-range device than a budget one. 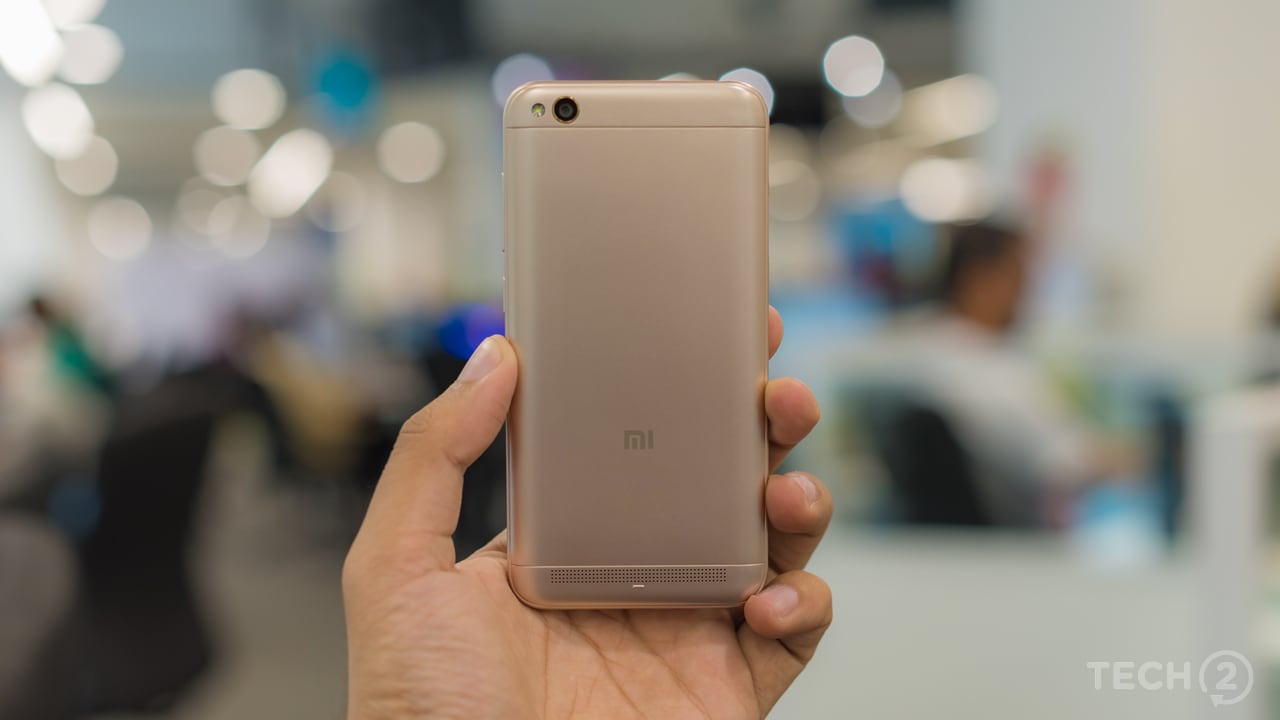 The Xiaomi Redmi 5A packs a microUSB port on the bottom of the device in 2017 along with the 3.5 mm headphone jack, microphone and an IR blaster on the top of the device. Xiaomi has added two SIM trays on the top left side of the smartphone. You will find the volume buttons and the power button a little towards the top on the right-hand side of the device. 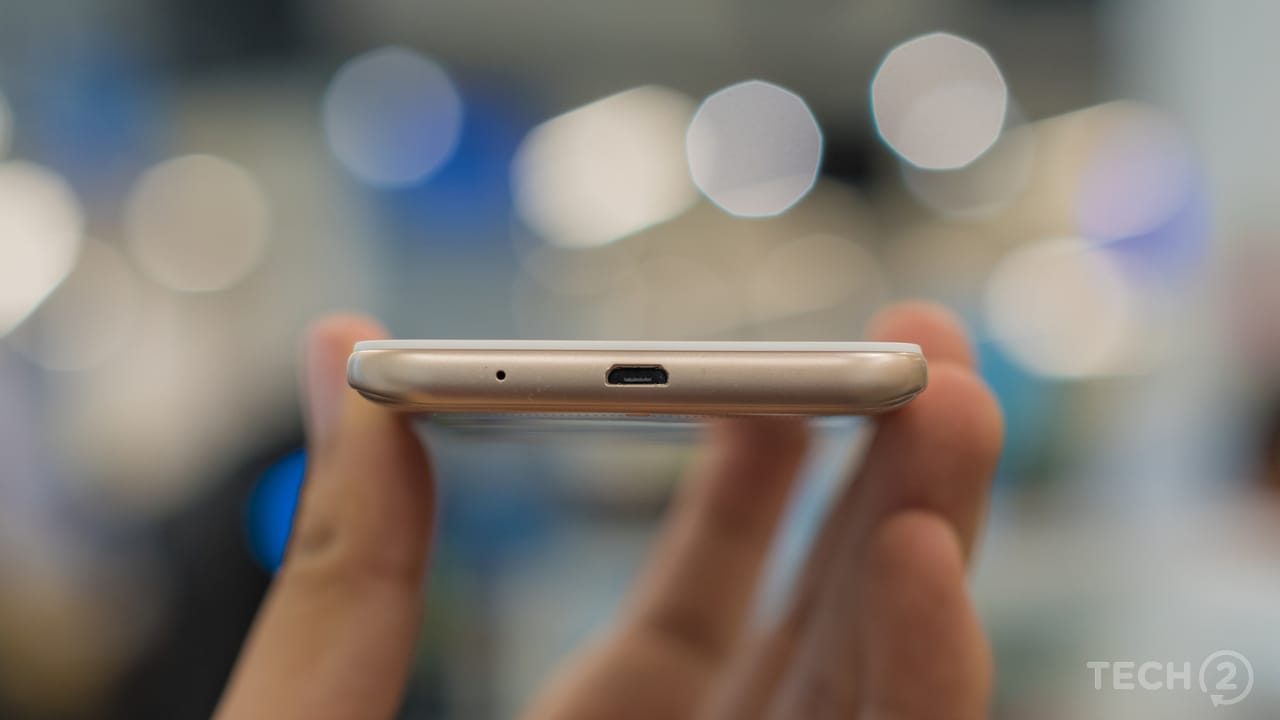 The Xiaomi Redmi 5A features a 5.0-inch HD IPS LCD display panel. The company has packed a Qualcomm Snapdragon 425 SoC with a CPU clocked at up to 1.4 GHz, along with an Adreno 308 GPU to handle graphics-intensive tasks. The phone will come in two variants, with the first one packing 2 GB RAM with 16 GB internal storage and the second one packing 3 GB RAM and 32 GB internal storage. Xiaomi has given users the option to expand the storage by up to 256 GB using an external microSD card via a dedicated microSD card slot. 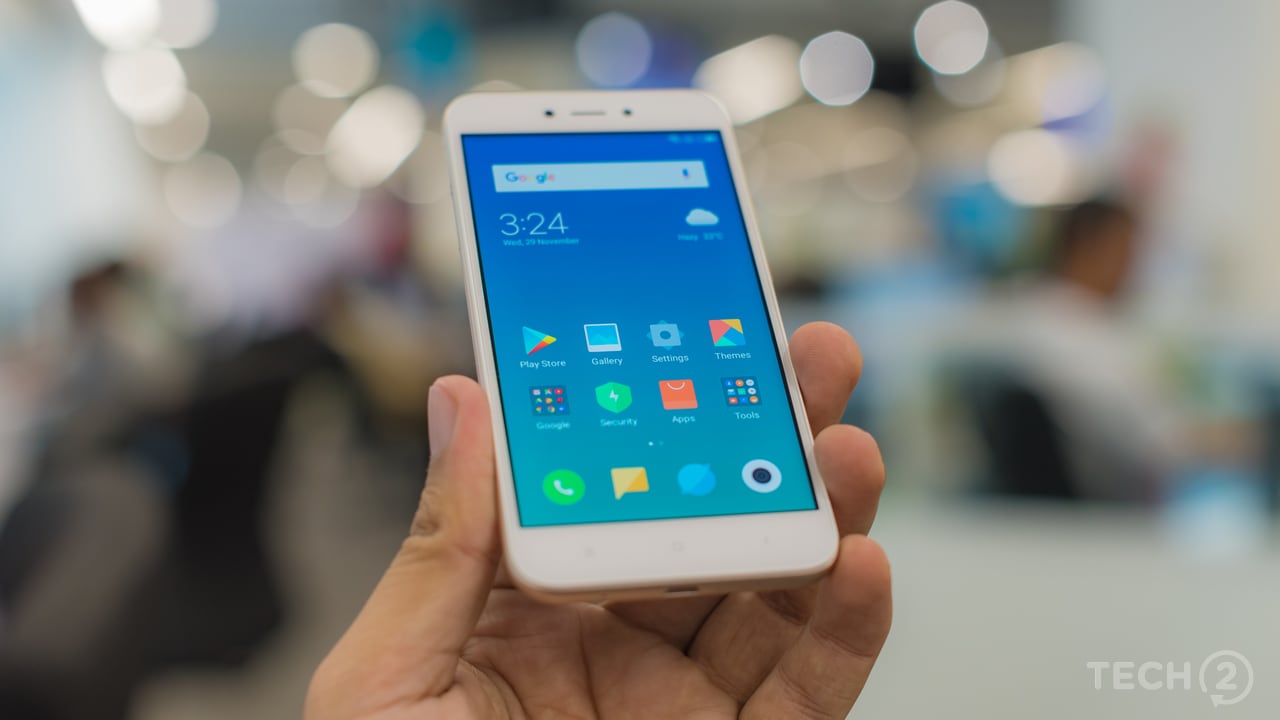 Xiaomi Redmi 5A comes with a with a 13 MP camera sensor and an f/2.2 aperture and Phase Detection Auto Focus on the back of the smartphone. The front camera is a 5 MP unit with an f/2.2 aperture on the front of the device for selfies. The device is powered by a 3,000 mAh non-removable lithium-ion battery.

The device will come with Android 7.1.2 Nougat-based MIUI Global 9.1 stable build out of the box along with the usual bunch of MIUI apps including a separate ‘Apps’ store along with Google Play Store.

The Xiaomi Redmi 5A features a 5.0-inch HD (1080x1920 pixels) IPS LCD display panel. The LCD panel comes with a 295 PPI pixel density and a 70.0 percent screen-to-body ratio. The display looks bright and vibrant with good viewing angles in terms of colours. The brightness levels of the screen take a hit as we change the viewing angles. The screen did seem reflective but we will have to check the readability of content under direct sunlight at a later point in time. The Xiaomi Redmi 5A is equipped with a quad-core Qualcomm Snapdragon 425 SoC clocked at up to 1.4 GHz along with an Adreno 308 GPU to handle graphics-intensive tasks like games. This means that the company has not upgraded the SoC of the 5A when compared to the 4A.

One thing to note here is the fact that in my limited testing, I found that only half the storage of the total 16 GB is available for users out of the box. I wish that more storage was available for users, but in the current scenario, I would think that a microSD card is a must buy for potential Redmi 5A customers.

Xiaomi Redmi 5A comes with Android 7.1.2 Nougat-based MIUI Global 9.1 stable build out of the box along with the 1 October 2017 Android security patch. The company has added the usual MIUI apps, including a separate ‘Apps’ store along with the Google Play Store. One thing to note here is that we are not expecting Android Oreo 8.0 update to hit the 5A anytime soon as the Nougat-based update just started rolling out for Xiaomi devices some time back.

We reached out to Xiaomi and the company stated that it has ensured that the Operating System was optimised to run well on the lower-end hardware instead of asking users to sacrifice on a good user experience for the money they were paying to buy the entry-level smartphone.

The device comes with some considerable amount of bloatware in terms of MIUI apps, apart from the standard Google apps. Xiaomi has also added Microsoft apps such as ‘Word’, ‘Excel’, ‘PowerPoint’, ‘Outlook’, and ‘Skype Lite’ out of the box. Xiaomi has added its own device location service in the 5A to ensure that users can track and locate the device if they happen to misplace it. 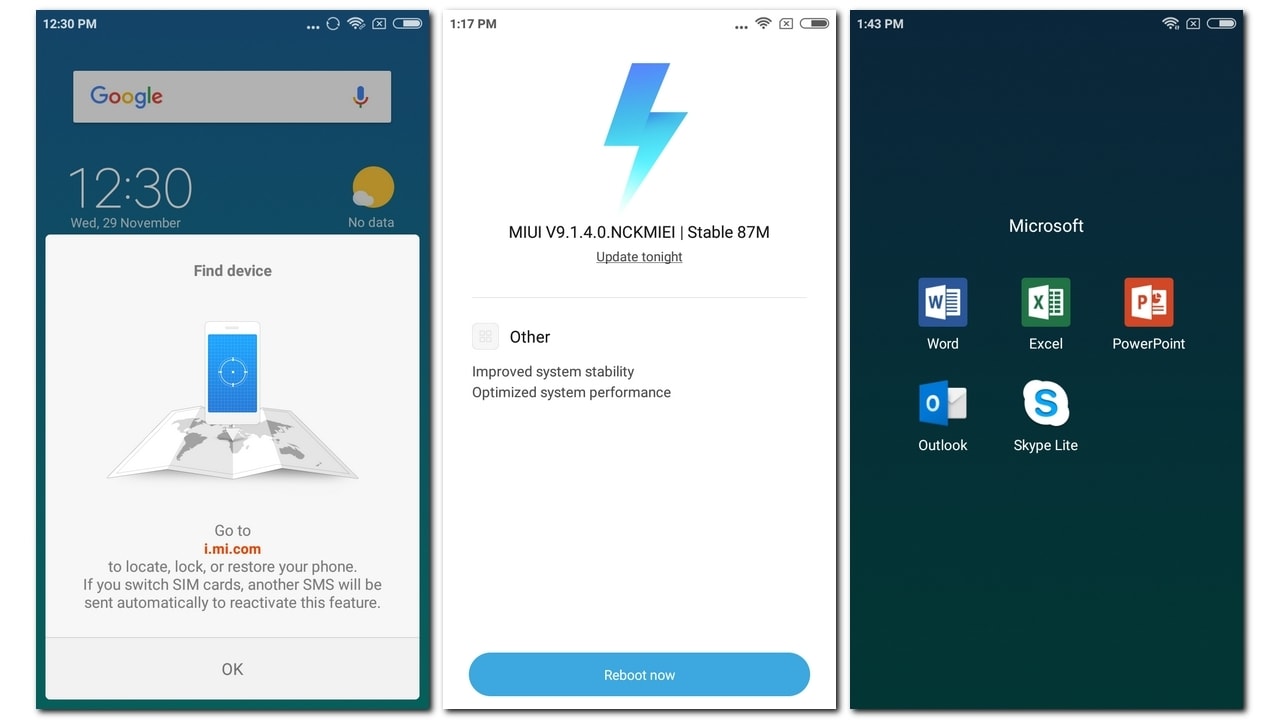 The software experience is smooth and does not lag in my limited amount of testing. The multi-tasking animations look a bit slow, but it is likely to compensate for the fact that the device has a limited amount of RAM to store apps in the memory.

As mentioned earlier, Xiaomi has packed in a 13 MP rear camera and a 5 MP front camera. The camera software packs a number of modes like panorama, timer, audio, manual, beautify, HHT (Hand Held Twilight), scene, and tilt-shift. The back camera can shoot 1080p video at 30 fps. The images shot on the camera were borderline decent with good shots in sufficiently-lit conditions, but we need to test the camera properly to give a final verdict.

The Xiaomi Redmi 5A comes with a standard set of connectivity options including Wi-Fi and Bluetooth. As a bonus, however, you get an IR blaster, which is fun and useful. The dual SIM implementation is also nice as the 5A is one of the few phones where you can use a two SIMs as well as a microSD card. Two trays are present, with one supporting a nano-SIM and a microSD card and another one that holds a single nano SIM. This setup was implemented specifically for India, says Xiaomi, and is not available in the China version of the device. 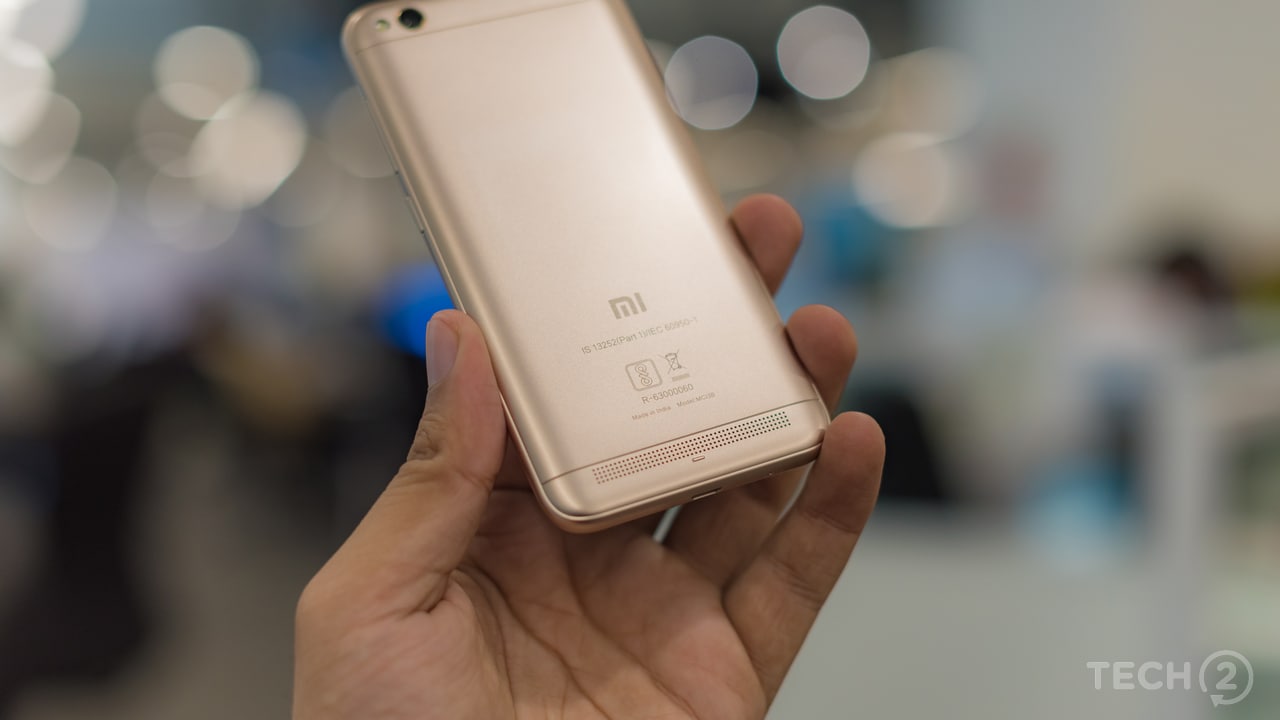 The device will be available in three colour options, Gold, Gray, and Rose Gold. The Rose Gold variant will start rolling out after a month of the launch of the Gold and Gray colour variants. Users will get a 3,000 mAh non-removable Lithium-Ion battery to power the device. Xiaomi claims that they have optimised the battery in the Redmi 5A and it will provide eight days of standby time for users.

Xiaomi has improved on its previous offering in terms of design and build quality while keeping the internals and price intact. This means that the company is following its formula that has worked in the Indian market without making any significant changes to its strategy. The addition of the latest version of MIUI 9 feels optimised and does not hold the device back, though we do miss Oreo. The company claimed that it has optimised MIUI 9 to ensure that the lower-end variant of the device runs smoothly. For the price of Rs 4,999, assuming that one is part of the first five million buyers, the Redmi 5A is at an extremely competitive spot.

The 3,000 mAh battery, Qualcomm Snapdragon 425 SoC, 13 MP camera on the back of the device and Android 7.1.2 Nougat-based MIUI 9, the device offers fierce competition to its rivals. The second variant with 3 GB RAM and 32 GB internal storage improves on the lower variant by giving users more room in terms of storage and RAM. Both the variants offer really good value for money at their current price points.

However, we still have to test the smartphone and put it through its paces to check if the latest device in the Xiaomi Redmi 5 series is worth your hard-earned money or not.

Redmi Note 10 Pro with a 64 MP quad camera setup to go on sale today at 12 pm on Amazon and Mi.com

Redmi Note 10 Pro Max to go on sale today at 12 pm on Amazon and Mi.com