Xiaomi Mi A1 was initially launched with Android Nougat; we should soon expect an Android Pie update.

Chinese smartphone manufacturer Xiaomi launched the Mi A1 smartphone in India last year in September, at a price of Rs 14,999. It has been noted, that the company has been slow to adopt Android Pie, the Mi A1 model was recently spotted on Geekbench running the operating system and we should expect it to roll out soon on all the Mi A1 models. When the phone was launched, it was a lot like the Mi 5X in terms of design, specifications and the camera. However, the thing that set Mi A1 apart was that it was the first Android One phone made by Xiaomi.

It sports a 5.5-inch FullHD display that is protected by Corning Gorilla Glass. There is a fingerprint sensor at the back.

The phone has 4 GB RAM and 64 GB of internal storage which is expandable via a microSD card. It runs on a Qualcomm Snapdragon 625 chipset. 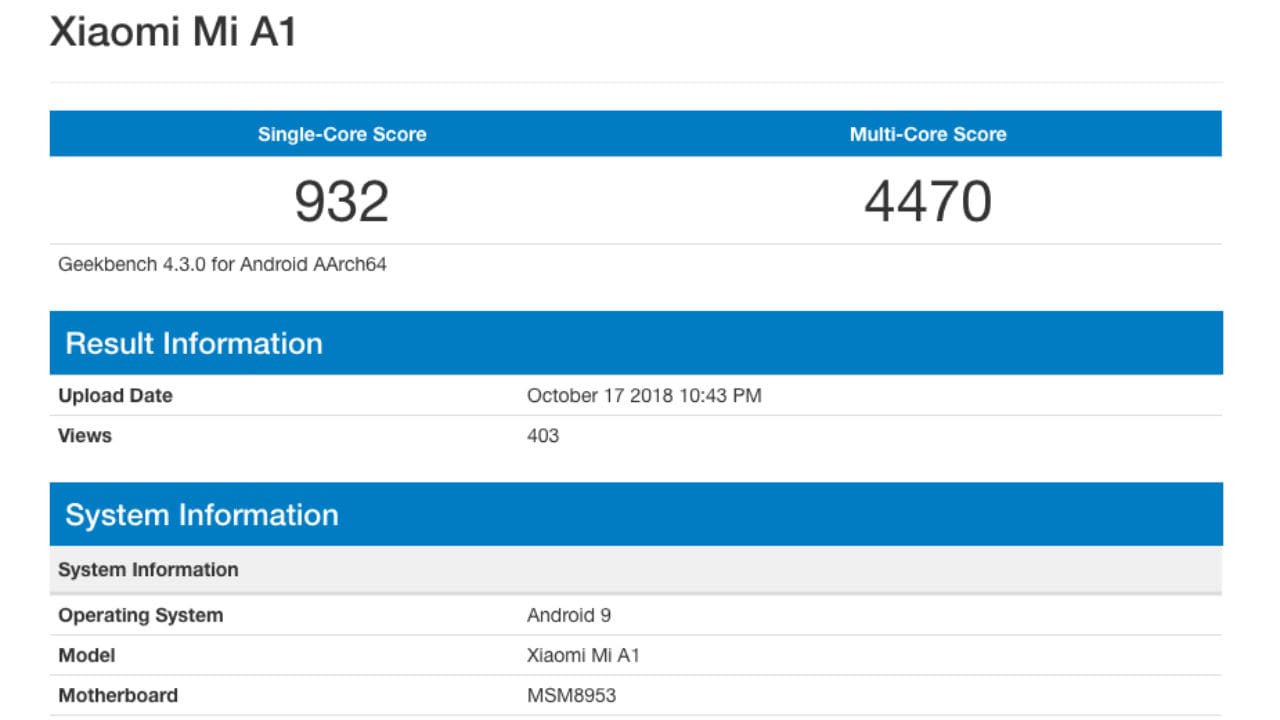 Xiaomi Mi A1 to soon get Android 9.0 Pie. Image: Geekbench

In terms of optics, the phone has a dual-camera with a 12 MP wide-angle sensor and a 12 MP telephoto lens. On the front of the phone is a 5 MP selfie camera. Powering the device is a 3080 mAh high-capacity battery.

The phone was launched in three colours — Gold, Rose Gold and Black. Xiaomi, despite having launched the Mi A2, continues to sell the vastly popular A1.

Xiaomi to launch its first 'dual camera' phone today: Here's how to watch it live and all we know

Xiaomi Mi A1 first impressions: Looking to shake things up with stock Android, at an impressive Rs 14,999 price point

Xiaomi Mi A1 spotted on Geekbench; likely to pack Snapdragon 625 and Android Nougat 7.1.2

Xiaomi rolls out Android Oreo to beta testers of the Mi A1, includes improvements to the fingerprint sensor

Xiaomi Mi A1 launched in India for Rs 14,999, to start selling from 12 September on Flipkart