Redmi 5A sports an all-metal body with a 5-inch HD display. It is powered by a quad-core Qualcomm Snapdragon 425 processor clocked at up to 1.2 GHz

Xiaomi has finally unveiled the Redmi 5A at a launch event in China on 16 October. The phone is a successor to Redmi 4A that was launched earlier this year in the Indian market. Xiaomi has priced the Redmi 5A at a price of 600 CNY which converts to around Rs 6,000 at the time of writing. However, the phone packs similar features and design when compared to the Redmi 4A. 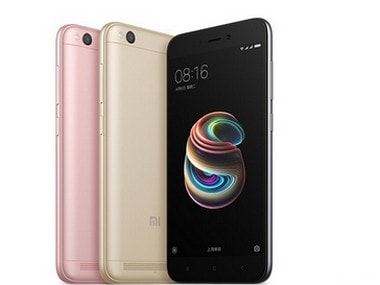 Redmi 5A sports an all-metal body with a 5-inch HD display. It is powered by a quad-core Qualcomm Snapdragon 425 processor which has been clocked up to 1.2 GHz along with 2 GB of RAM and 16 GB of internal storage that can be expanded up to 128 GB via a microSD card. It is likely that Xiaomi will announce a separate variant with more RAM variant later on but the company has not issued any statement regarding the same. 5A will run Android 7.0 Nougat-based MIUI 9 out of the box.

In terms of camera, the phone packs a 13 MP camera sensor on the back with PDAF and LED flash and a front facing 5 MP camera sensor.  The company has added a 4G-enabled dual-SIM slot with one nano-SIM and the other hybrid micro-SIM slot along with WiFi Bluetooth v4.1, GPS, FM Radio and a microUSB 2.0 port as connectivity options. Redmi 5A will run on a 3,000 mAh battery and the device will be available in three colours of Champagne Gold, Pink and Grey. The phone is currently limited to the Chinese market but we can't rule out the possibility of a launch in the Indian market.

Xiaomi Redmi 5A with MIUI 9 and 3,000 mAh battery launched at a starting price of Rs 4,999 for first five million buyers

Xiaomi Redmi 5A review: The device that sets the bar for entry-level smartphones

Xiaomi Redmi 5 Plus may launch soon; photo of the box spotted online

Xiaomi sells 10 million units of its Redmi 5A smartphone in 9 months: Report