Who’s the one wearing the heels? This mind-boggling optical illusion has the internet users scratching their heads

Someone please find the people in the picture and put an end to this crazy illusions!

An optical illusion of two people hugging each other has totally stumped the internet! Can you tell who out of the two is wearing the heels? 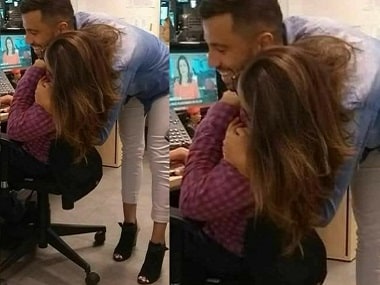 The optical illusion that the internet is talking about. Credit: Cj Fentroy, Twitter

Similar to the Yanny and Laurel audio clip, this innocent picture has divided the internet into two camps.

This started off with a tweet from a user named CJ Fentroy, who posted a picture of what appears to be two co-workers laughing and hugging. Now at first glance (and all subsequent glances for me), the picture seems to show a woman sitting in the chair, with a man hugging her from behind, who is wearing heels. Some, on the others hand, see the man in the chair and woman hugging from behind.

At first i thought he was wearing the heels pic.twitter.com/GSqurm3AcE

And the best part? The longer you look at the picture, more it blows your mind and further confuses as to which head belongs to which set of legs. I have stared hard at this picture for an unrealistic amount of time, and it's still hard to tell whether the guy in the photo is leaning over, with his head positioned above the girl's, or whether the girl is leaning over, with her head perched on the guy's left shoulder. And Twitterati isn’t helping me either. They are as torn as I am.

Exactly!!!! He IS wearing those heels cause his neck is in the collar of THAT shirt!!!

Just waiting for the two in the picture to put our minds to rest.