The Night Mode feature on WhatsApp isn't quite ready for a wider, public roll-out yet.

WhatsApp's much-awaited Dark Mode has been in the works for quite some time now but there's yet to be an official word on a wider roll-out. However, the popular messaging platform might be close to launching the feature and rolling it out to all users.

As per a post by WABetaInfo, WhatsApp has now implemented dark mode, renamed as Night Mode, to the apps calls and status pages in the latest Beta version 2.19.139. Screenshots shared in the blog post appear to be in line with the ones shared earlier revealing how dark mode is expected to look like once implemented. However, WABetaInfo also noted that a lot of sections aren’t compatible yet with the Night Mode so it might still be a while before the feature is fully ready.

Call or video call symbols in the Calls section appear in green as of now but it is anticipated that WhatsApp will change this colour to white once Night Mode is made available publicly.

In addition to the three sections in the app — chats, status and calls, WhatsApp has also implemented dark mode in sections within the settings menu of the app.

Now, WhatsApp is expected to follow a standard schedule of rolling the feature out to the beta users first and then moving forward with a full public rollout, which means that it could still be months before we see an official dark theme on WhatsApp. 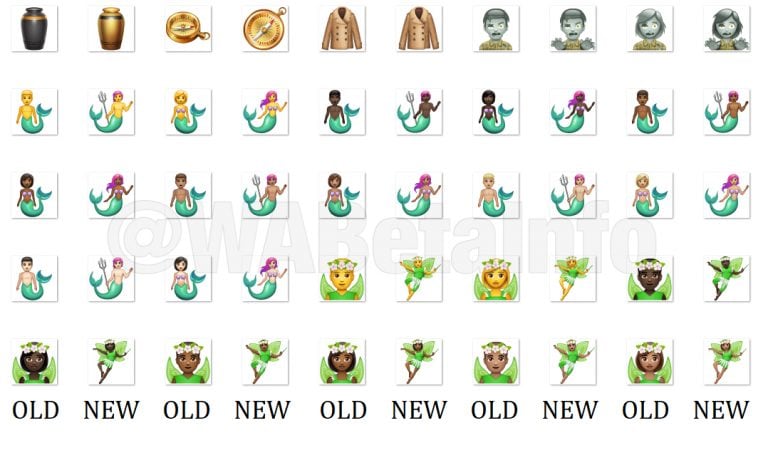 This is just one set of emojis that will be redesigned in the new update. You can compare them against their new and old look. Image: WABetaInfo

In addition to that, the update also brings as many as 155 redesigned emojis. We can tell from the screenshots shared on the blog that the old emojis have gone through few cosmetic changes. While for some there are layout changes, some have been reportedly redesigned completely.

WhatsApp Web to get new photo editing tools while Android Beta might get new emojis: Report