It almost appears that WhatsApp is doing its bit to solve its own fake news problem.

After the recent lynchings in the state of Maharashtra and a stern warning from the government, WhatsApp finally woke up to its fake news menace and laid down some steps it would take to solve its own fake news problem.

Today, WhatsApp pushed out newspapers ads with some easy tips that can help users decide if “something sent to you on WhatsApp is true.”

WhatsApp explained that a new feature that lets users see which messages have been forwarded, would be rolling out soon. The messaging giant requested users to double-check the facts when they were not sure who wrote the original message. The ad also tells users that they should question the information that has been presented to them on the messaging platform. “If you read something that makes you angry or afraid, ask whether it was shared to make you feel that way. And if the answer is yes, think twice before sharing it again.”

Strangely, WhatsApp also requests users to check for messages that “look different”. This is referring to messages containing hoaxes (or fake news) that have spelling mistakes. The brand suggests that users check for these signs so they can take their time and verify if the information is accurate before sharing them with others.

Thanks to the growth of 4G connectivity, video too can be easily downloaded and can be used to create messages meant to mislead users. Adding to this, WhatsApp conveyed to users that while a photo may look real, the story around it may not be genuine; suggesting that one should look online to see where the photo actually came from. 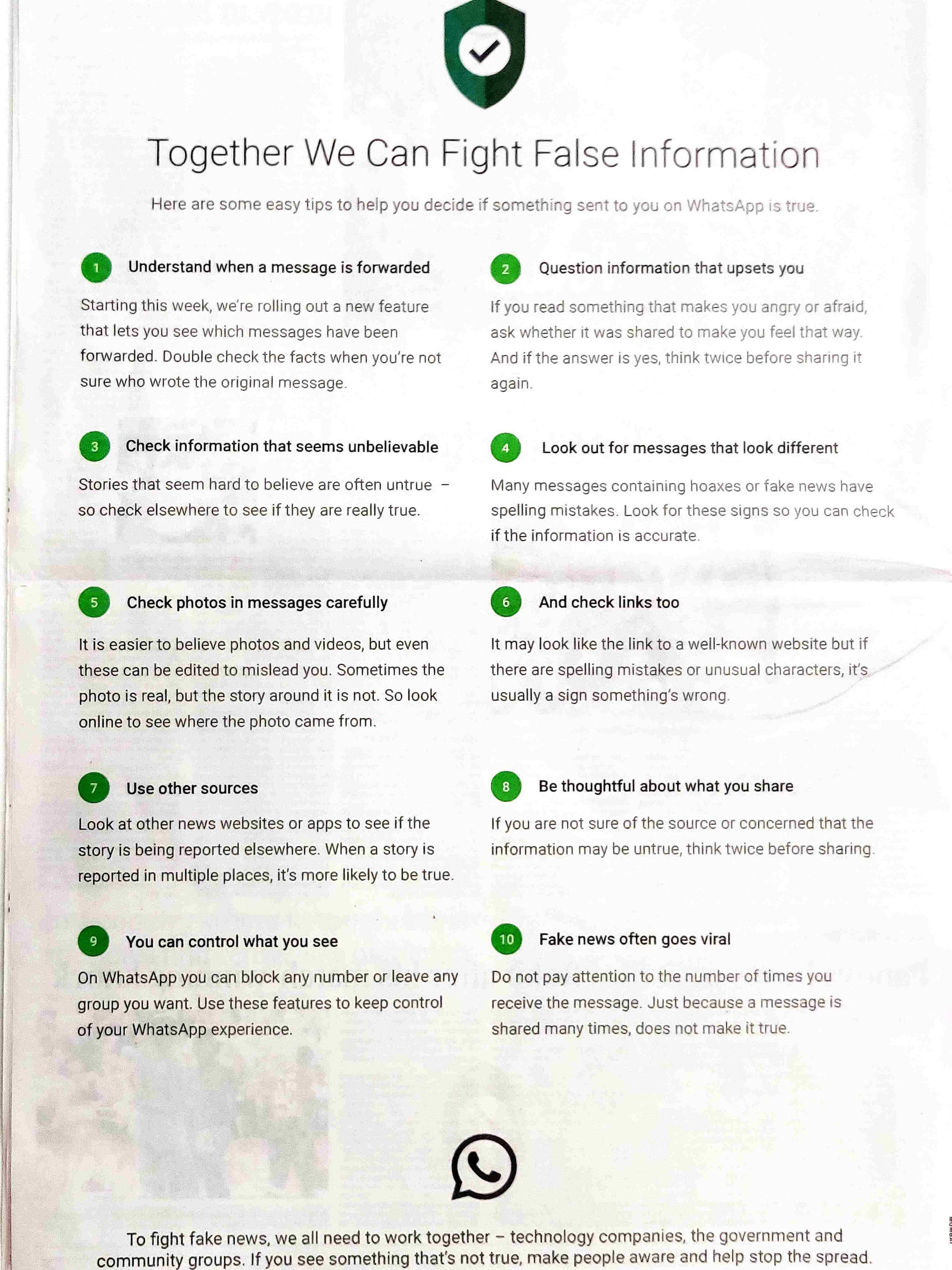 Checking links with incorrect characters is another area that the newspaper ad touches upon. It warns users of clicking on suspicious links especially those that have spelling mistakes of well-known websites.

Lastly, the Facebook-owned messaging app tries to educate users on why they should always check other sources to see if the story is being reported elsewhere before sharing it with others.

The popular Facebook-owned messaging service recently asked the Indian government for help in fighting the fake news menace that has plagued its platform, making it a common source of misinformation thanks to its non-regulated nature.

“To fight fake news, we all need to work together — technology companies, the government and community groups. If you see something that’s not true, make people aware and help stop the spread.” the advertisement reads.

However, WhatsApp is far from solving its problem and the newspaper ad throws the ball in the user’s court to help with the problem.

Digital rights activist Nikhil Pahwa sheds more light on how WhatsApp can change things for the better using its own services.

Despite criticism for not regulating its services, lawyer Apar Gupta also points out how WhatsApp is being wrongly targeted for the lynchings as the government shields itself from accountability.