Vivo X27 has been made available in two variants with different processors and storage options.

Vivo unveiled the Vivo X27 and the X27 Pro at an event held in China. The phones are equipped with an upper mid-range processor and premium design.

The phones had been doing rounds of the rumour mills from quite a while now.

The rear of the Vivo X27 sports a design which termed as Peacock Feather by the company and is available in all colour variants. The Vivo X27 features a 6.39-inch FHD+ Super AMOLED display with 19.5:9 screen ratio. It has thin bezels on both sides and the top with the chin being a bit chubbier than the rest.

On the camera front, the Vivo X27 has a 16 MP pop-up selfie camera that is said to slide out in about 0.68s with light strips flanked on both its sides.

The colour of the LED lights can be set by choosing amongst six different colour options. On the back, the phone flaunts a 48 MP Sony IMX586 primary camera with f/1.7 aperture, a 13 MP wide-angle camera, and a 5 MP depth-sensing camera. The triple rear camera is vertically aligned on the left side.

The camera has a number of features such as a 2.5 cm super macro mode, a super backlight mode, super night scene mode, a beauty mode and even celebrity filters.

The phone runs FunTouch OS 9 based on Android 9 out of the box. The latest iteration of Funtouch packs in dark mode, cooling turbo, game turbo and lots more. The Jovi assistant is also on board which can be connected to smart home appliances which are compatible with it.

The Vivo X27 has a 4,000mAh battery with support for Vivo’s own FlashCharge 22.5 W fast-charging technology. Also, it comes with a 6th generation in-display fingerprint technology. 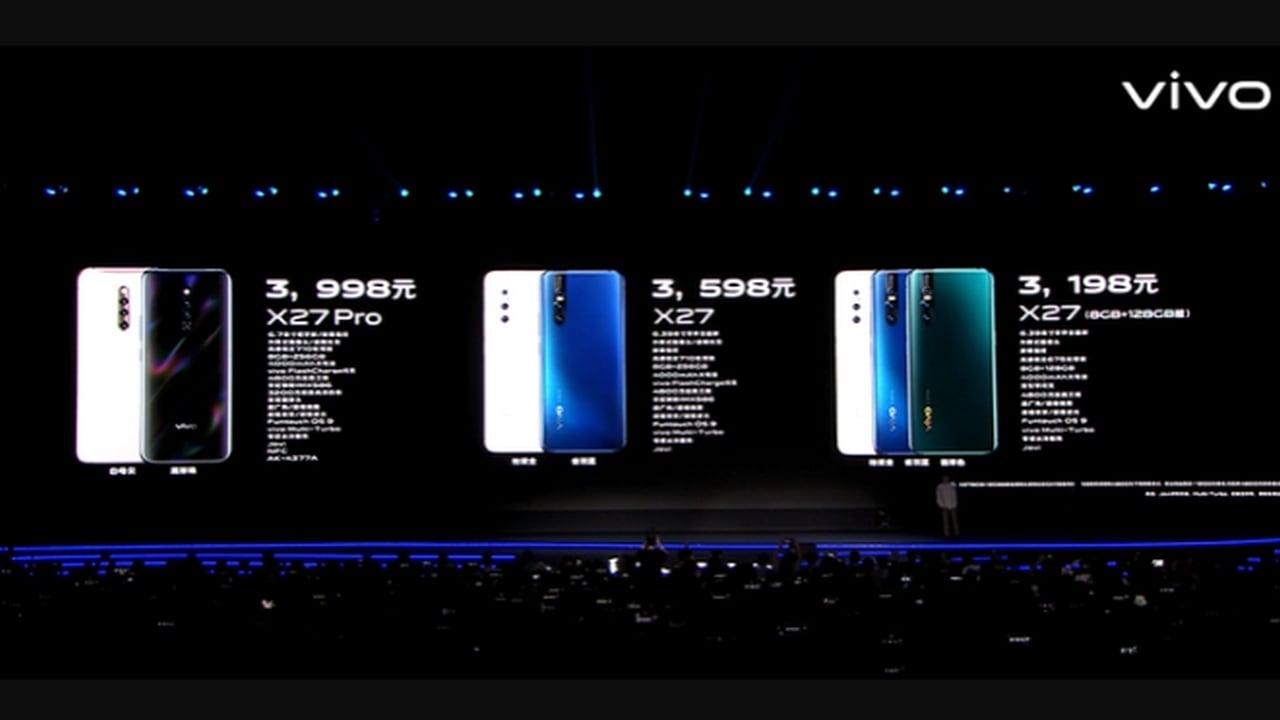 The Vivo X27 Pro sports a larger 6.7 super AMOLED display with an aspect ratio of 20:5:9. It has a wider pop-up selfie camera with 32 MP lens and a dedicated LED flash. It too comes with customisable light strips placed on both sides of the pop-up camera.

The phone is powered by Snapdragon 710 chipset paired with 8 GB of RAM and 256 GB of storage.

As for the camera, the X27 Pro too sports a triple camera setup but is vertically aligned on the centre. The configuration is the same as X27.

Vivo says that the phone has a U-shaped 10-layer PCB which is a first for the manufacturer. It also comes equipped with dedicated audio chip and NFC.