Khosrowshahi said Kalanick had done “an incredible job” of building the company. But Uber has entered a new period of focusing on profits.

In the midst of a profound market shift, Uber considers itself a leader among the larger private companies that went public in the past year, said Dara Khosrowshahi, the ride-hailing company’s chief executive. In an atmosphere of high pressure to deliver profits, Uber is on a “strong path” to execute its goals, he said.

“Thank God we went public when we did,” Khosrowshahi said at the DealBook conference last Wednesday. “Fundamentally, the ride-sharing business is upscale, is global, is an attractive business and is only going to get better in a competitive market.”

Uber, the most prominent tech company to go public in 2019, has gone through a striking transition in the past two years, from the forced resignation of its first chief executive and founder, Travis Kalanick, to its initial public offering in May.

In recent months, the company has been confronted with an especially difficult period as Khosrowshahi began a belt-tightening operation to cater to company investors’ appetite for a clearer path to profitability. Uber laid off more than 1,000 workers in three rounds of cuts, removed top executives and saw board members leave (although Kalanick remains one).

It has introduced temporary hiring services and financial products for drivers and moved deeper into the grocery delivery space, recently acquiring a majority stake in one such startup, Cornershop. 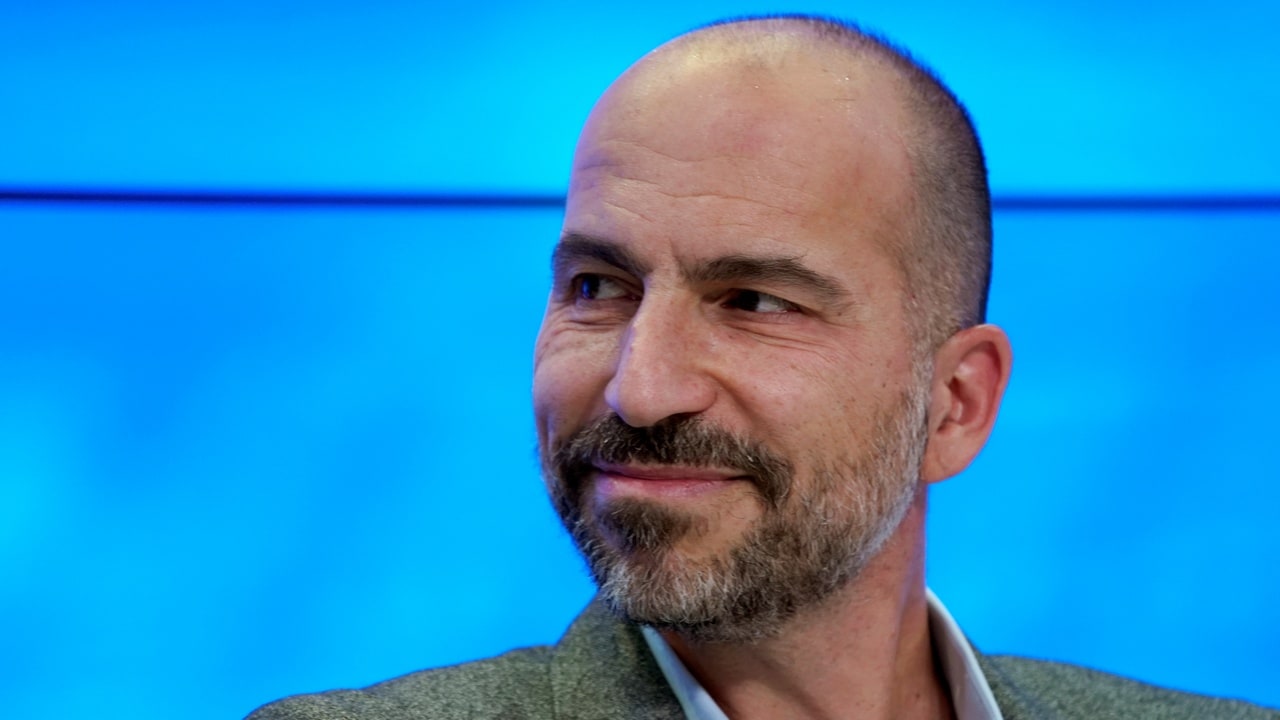 Khosrowshahi’s efforts appear to be making some headway.

This month, Uber announced financial results that exceeded Wall Street’s expectations, reporting that third-quarter revenue had risen 30 percent from a year earlier, to $3.8 billion, above Wall Street estimates of $3.6 billion. It posted a net loss of $1.2 billion, wider than the $986 million loss a year earlier but less than the $5.2 billion in the previous quarter.

Still, Uber has been under close scrutiny as a potential paradigm for how tech’s so-called unicorns — startups valued at $1 billion and above in the private markets — should be navigating the shifting landscape in Silicon Valley and how they manage the recalibration of expectations from investors.

Wednesday represented a milestone in the arc of Uber’s story, as the company’s post-initial public offering lockup expired — meaning that shares held by early investors became eligible to trade on the market. As Uber shares become available, and more risk-averse investors sell their stocks, Khosrowshahi said, the company was “going to find alternative investors who believe in the story and believe in the numbers.”

“We’re very, very, very different than WeWork,” he said of the company, which ultimately failed to deliver one of tech’s most highly anticipated IPOs of the year and had to be bailed out by SoftBank, the Japanese investment powerhouse that also happens to be a major investor in Uber.

Still, Khosrowshahi said, he did not believe it was “proper or fair” to judge Masayoshi Son, chairman and chief executive of SoftBank, for taking a $4.6 billion hit from his investment in WeWork.

“He definitely pushed up valuations” of startups, Khosrowshahi said, but his track record was “going to be determined over a long period of time.” SoftBank — which apart from investing in WeWork and Uber, put $335 million into work productivity company Slack — reported its first quarterly operating loss in 14 years Wednesday, about $6.5 billion in total.

Khosrowshahi also defended Uber’s position that it was a tech services company that would not be reclassifying its drivers as employees in light of a recently passed law in California on independent contractors. “Ninety-two percent of our drivers work less than 40 hours a week,” he said. “I think this law is misguided, and we’re going to fight it.”

He argued forcefully that Uber was starting to grow more carefully, despite its inherently low-margin business because of its high operating costs. The company did not hesitate to concede defeat in — and pull out of — some of its tougher markets, he said, including China and Southeast Asia. He compared Amazon’s cloud services platform, Amazon Web Services, to Uber’s core ride-hailing business and said these represented the consistent moneymaking assets for Amazon and Uber.

Khosrowshahi said Kalanick had done “an incredible job” of building the company. But Uber has entered a new period of focusing on profits. 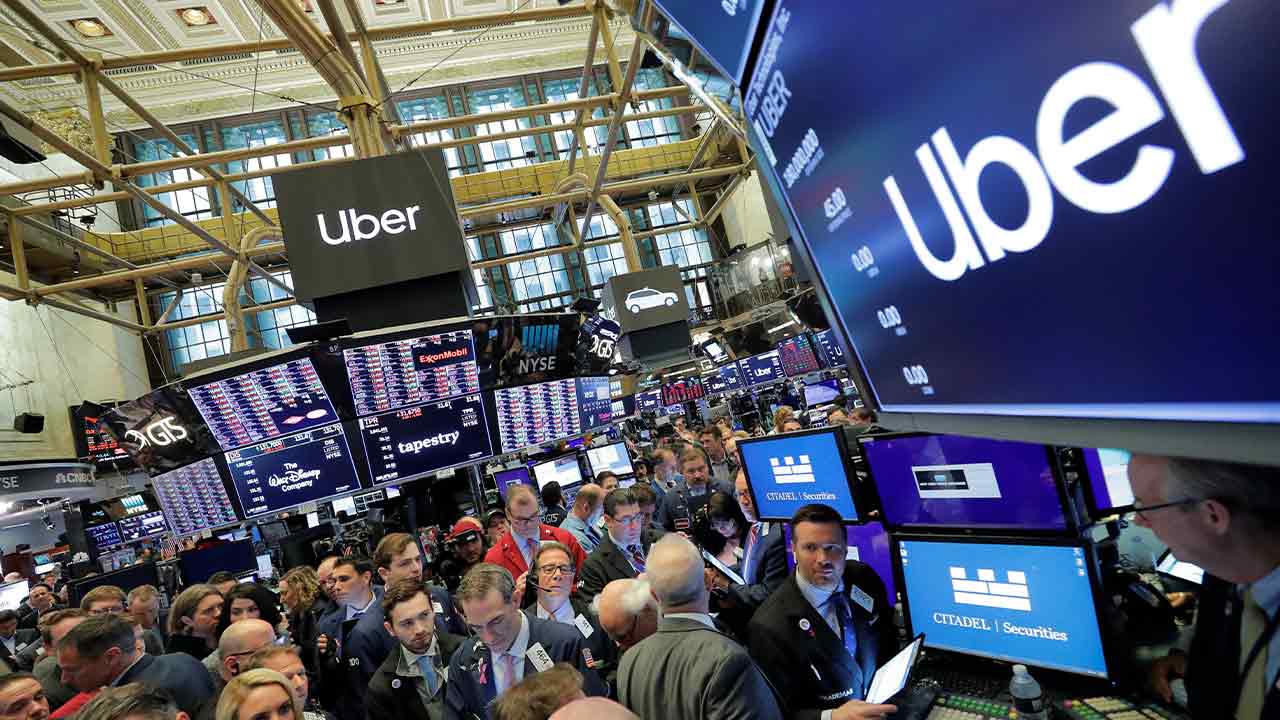 Following are excerpts from the conversation with Andrew Ross Sorkin. They have been edited and condensed.

Q: You announced earnings this week — arguably better than the market had anticipated — but the stock goes down. Peloton, the same thing happened this week. So the question is what do you think is happening to the unicorns of Silicon Valley, and what do you think that shift is really about?

A: So I think what’s happening is that there has been a fundamental revaluation of revenue growth and the value of profits in an increasingly uncertain world, right? So the world around us, everything going on in politics, the global landscape, has fundamentally changed over the past two years. And I think the appetite for the unknown and high-risk in the public markets, it’s just gone down. And that has consequences. You’ve got some of the safety stocks doing much better, utilities, etc.

Q: A lot of the conversations we’ve been having today have been about the intersection of business and policy. And one of those is about how drivers are treated as employees or nonemployees, what benefits they should be getting, what benefits they shouldn’t be getting. A law was put in place in California that would treat these drivers as employees. And you say you believe that this law somehow doesn’t apply to you.

A: The law is based on a court decision about a year and a half ago. So we’ve been operating under the law in one way or the other for a year and a half. We do think that based on how we run our marketplace, we are a technology services company. We’re not in the business of driving. Our drivers are independent, and they can get on and off the service anytime they want. The law is quite technical as to how it deals with these issues. And just because the hurdle got harder doesn’t mean we don’t think we’re going to pass the test.

Other stories from DealBook conference

Disney is a great company, I think they are going to have great success: Netflix CEO Reed Hastings