Twitter has started rolling out the voice direct message or DM for a few users in India. It was earlier reported in September that the microblogging site was working on this feature. According to Twitter, this feature will be released in a staged manner, so it is possible that many of you cannot use the feature just yet. Users can send up to 140 seconds long voice messages in private chats. This feature is currently being tested in India, Brazil and Japan. It was reported that Twitter was working on this feature since September last year.

To use this feature, all you need to do is open the chatbox of the concerned contact, tap on the voice icon placed in the bottom right corner and start recording. Once you have recorded the voice message, tap on the stop icon to finish. You will also have the option to hear the audio before sending and deleting it if you want. Once you approve it, tap on the send icon and you are good to go. 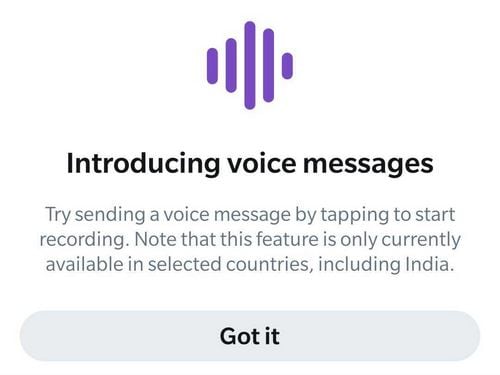 Voice DM feature is now available for a few users in India.

All the users can listen to this audio DM but the option of sending a voice message is not available for all. This feature will be available for both Android and iOS users.

For the unversed, Twitter had previously introduced voice tweets on its platform where users could record up to 140 seconds long audio clips and post instead of writing.